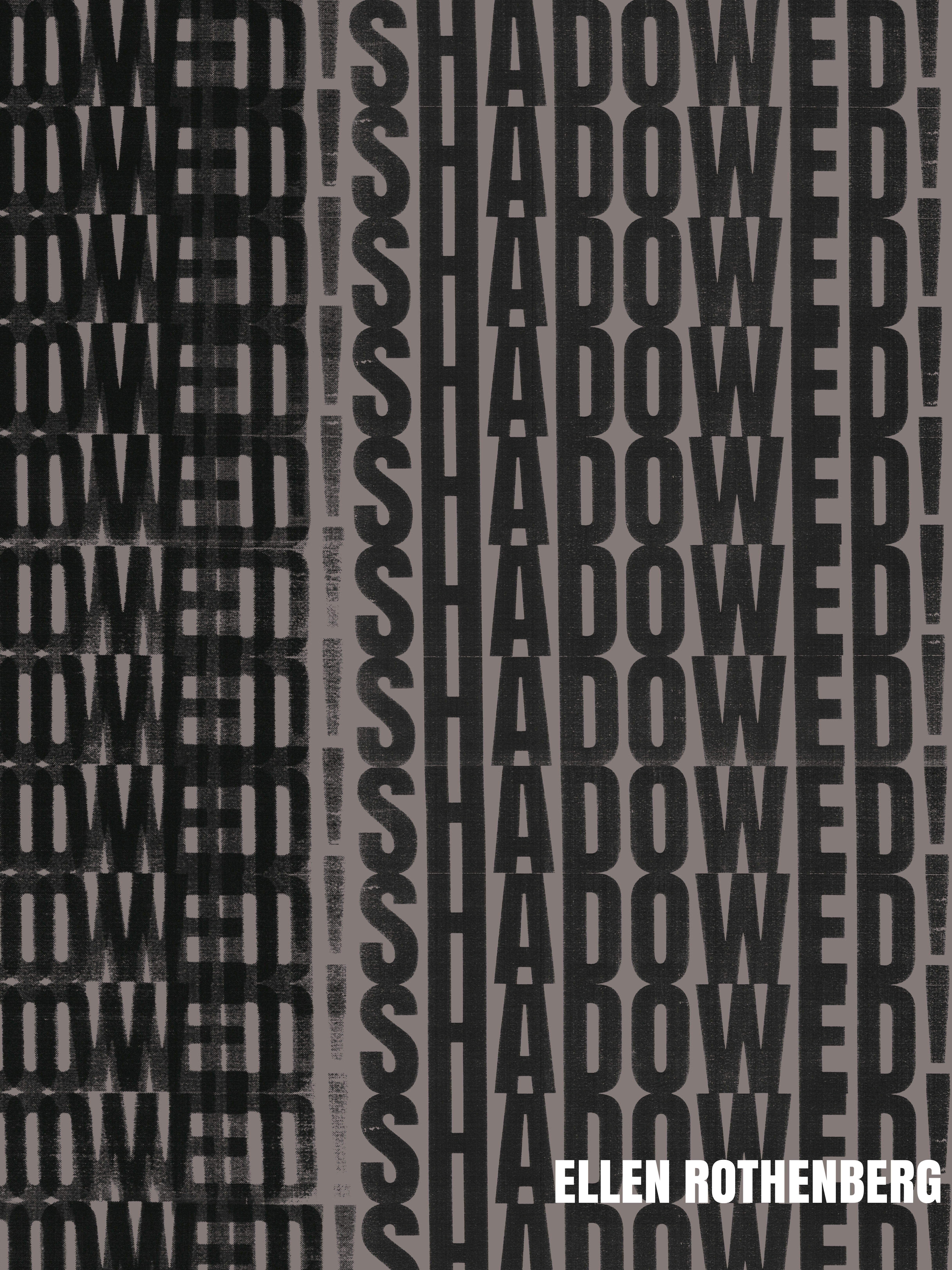 “Shadowed!” is not a catalogue, nor a photobook, but instead a collection of documents from—and responses to—Ellen Rothenberg’s exhibition “elsetime,” which took place at Logan Square’s Sector 2337 in May 2015. In the exhibition, Rothenberg wove together memories and thoughts on Bertolt Brecht’s final home, Woodstock, nineties Berlin, recent Syrian protests and present-day Chicago using photography, borrowed texts, sculpture, sound and performance. These wide-ranging references share a common theme of transition sparked by groups challenging prevailing narratives, histories and architectures. In keeping with this idea of coming together to propel new ideas, the book is made up of four responsive essays, an archive of research materials, five sets of performance notes and one interview transcription—all of them by colleagues, fellow writers and artists inspired by and expanding the impact of Rothenberg’s exhibition. Though the book is about Rothenberg’s work, she does not actually publish new writing within it. Instead, her presence is embedded in the design, installation photographs, ideas and transcribed words from conversations around her work.

Installation images—the only pictures in full-color‚ begin the project, acting as the prompt for the pages that follow. Without explanation, glimpses of the works shown at Sector 2337 cover the pages often as full-bleed spreads. Photographs of shoes on floorboards, blurry protest crowds and research texts cover walls, while several large boards—called “lean-tos”—incline against the brick wall of the gallery with photos of chairs and plaid bags pasted on them. A record player and pile of LPs sits near the front of the gallery. The color vividly jogs readers’ memories and brings the exhibition back to life for those who saw it.

This sequence also plays with one of the central thoughts carried from Rothenberg’s “elsetime” exhibition to “Shadowed!”: the idea of temporal fluidity. Shawn Michelle Smith explores this idea in her essay, “Some Other Time,” which appears midway through the book, when she describes how photographic time collapses the past, present and future, and that “elsetime” is a time in relation to the present. In the opening sequence of colored installation images, some spill over the turn of the page, so that a reader cannot see the full image at once. The reader must flip back and forth to get a sense of the whole picture, creating a smart visual interpretation of Smith’s sense of Rothenberg’s portrayal of time. Further, in Smith’s chapter, cropped black-and-white installation images are partially hidden in the book’s gutter, so that readers may consider the installation images as mere “glimpses” or “traces” as Smith says of the exhibition that existed.

Looking closely at the photographs of Rothenberg’s work, it becomes clear how thoughtful the cover design is. The black Ikea chairs used in “elsetime” performances, photographs on one of the “lean-tos,” and gallery conversations appear to be its inspiration. These chairs are minimal with plastic backrests and seats. Both surfaces have a pattern of circular cutouts. On the cover, “Shadowed!” is repeatedly printed in rows down the page in black capital letters. The spaces in and between the letters resemble the pattern of holes in the chairs, and a slight overlapping of letters on letters resembles the chairs’ stacked positions. The typography and spacing cleverly evoke the forms used in the exhibition.

The four essays ground readers in specific moments in the vast expanse of history that Rothenberg’s work engages from the 1930s to the present. Caroline Picard, the curator of the exhibition and editor of “Shadowed!,” recalls the objects in the exhibition and contextualizes them with anchoring text. She acknowledges how Rothenberg simultaneously provided and withheld a subjective perspective on each object through layers of personal and historical references, at times requiring viewers to work like detectives to connect the dots between pieces. Hannah B. Higgins’ text considers playwright Bertolt Brecht and the epic as she looks at a photograph of an armchair taken by Rothenberg. Smith explores the way that Rothenberg’s photographs express time, and Jeffrey Stoker writes on montage in the “Woodstock” film and stills. Together, these essays help unpack the labyrinth of meanings and allusions that each of Rothenberg’s objects offers. The writers reveal what Rothenberg initiates in “elsetime”: that histories change as different objects consume divergent subjectivities and as bodies come together to interact with them and their surrounding architectures.

The performance notes are the hardest pieces to relate to in book form because the images in “Shadowed!” only reference one or two moments in each performance. Furthermore, the overlaid texts come off as poetic rather than explanatory, making them altogether new works rather than direct documentation of prior actions. If the reader hasn’t seen these performances live, they may feel like they are receiving a recipe with some edits without getting to taste the original results. I appreciate the inclusion of these texts as significant in this process of reflection and as expressions of the diverse range of interventions that occurred in the space, but since the preceding texts function as clear and independent entities outside of the exhibition, this section feels slightly more esoteric to those who did not see the show and will only engage with the book.

The book ends on a note of clarity with a conversation between Rothenberg, Picard, Higgins and Smith—a welcome conclusion, finally hearing from the muse of “Shadowed!” herself. As they discuss how Rothenberg came to interact with the various settings or events inspiring the work in “elsetime,” the conversation moves toward a discussion of personal archives, the past and how images act as mediators. In these final pages, some of a reader’s lingering questions are brought to light and out of the shadows.