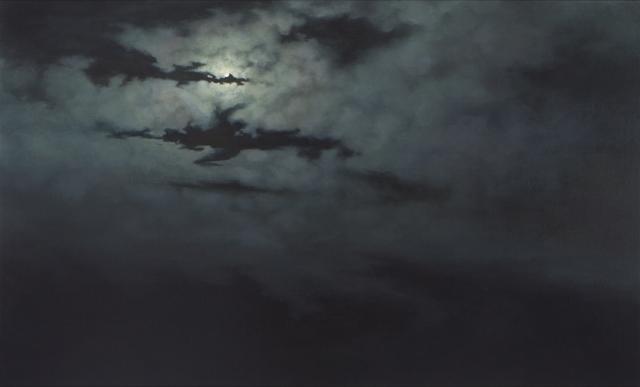 Regardless of what the thermostat says, the temperature in a room hung with Dozier Bell’s landscape paintings is about ten degrees below comfortable. The skies are dark and the atmosphere damp. It’s like camping out in a remote mountain valley where you never feel warm, and there is no one to keep you company. It’s just you and the cosmos: vast, powerful, timeless and indifferent. These images can make a viewer feel small, especially in the series of miniature charcoal drawings, most of which are less than five inches across—viewers might want to bring a magnifying glass.

The painting that really stunned me is called “17:00,” referring, presumably, to time as calculated on a nautical twenty-four-hour clock. It depicts the breaking waves of the sea as seen from shore. More essentially, it depicts a cold, deep, flowing and relentless power. It is not a pleasant picture postcard. It’s not romantic, it’s not heroic, it is not about any particular time or place. The artist lives in Maine, but this sea could be anywhere on the planet from a billion years in the past to a billion years in the future. It’s not human, but only a human could have this kind of experience with nature. It’s a natural archetype in the human mind, and every nuance of shape and color has been intensely felt into place, even the clots of paint that have been painted over and remain only as texture. 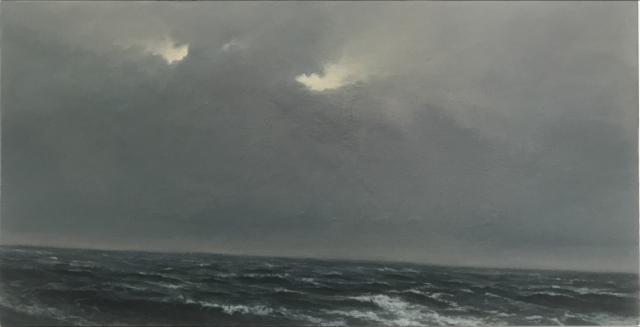 Several paintings continue this pursuit with other basic natural phenomena: hills, clouds, the night sky, the moon. But never the sun, unless it is setting. As John Milton once dichotomized the human experience, Bell embodies the “Penseroso” but never the “Allegro.” Human things are rarely depicted—in several of the small drawings and in one painting, Bell introduces the dark silhouettes of man-made structures. The title of the painting, “Wehrbau,” refers to the dark hilltop fortification that is depicted against a glowing sky. How romantic! Isn’t this the kind of sight that makes tourists want to cruise down German rivers? It certainly feels less profound and more sentimental than Bell’s other work. The small charcoals venture in a variety of directions. In “Harbor City,” Bell gives us an urban view from that time of day when the sky has just enough light to make streetlights indiscernible. Or perhaps it’s set back in a time when streetlights had not yet been invented. Either way, the imagined city feels both real and dreamlike. In “Settlement 2,” the viewer is climbing up to a strange assortment of buildings and towers, hard to discern in the darkness. It feels as raw and ominous as a Gothic novel. 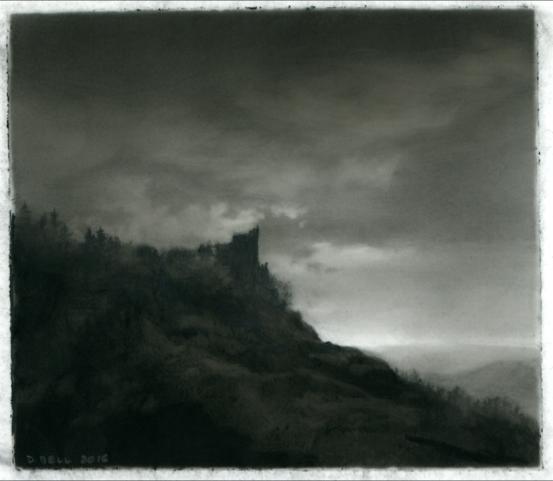 Reaching back before the naturalism of the nineteenth century, Bell’s approach to landscape painting goes all the way back to its European beginnings with Joachim Patinir in the early sixteenth century. It’s more of a philosophical Weltlandschaft, or worldview, than a view of any particular place. It feels quite distant from the art and sensibilities of Chicago, which makes it all the more memorable. (Chris Miller)

Dozier Bell’s “The Limits of Civilization” shows through May 19 at Zolla Lieberman Gallery, 325 West Huron.