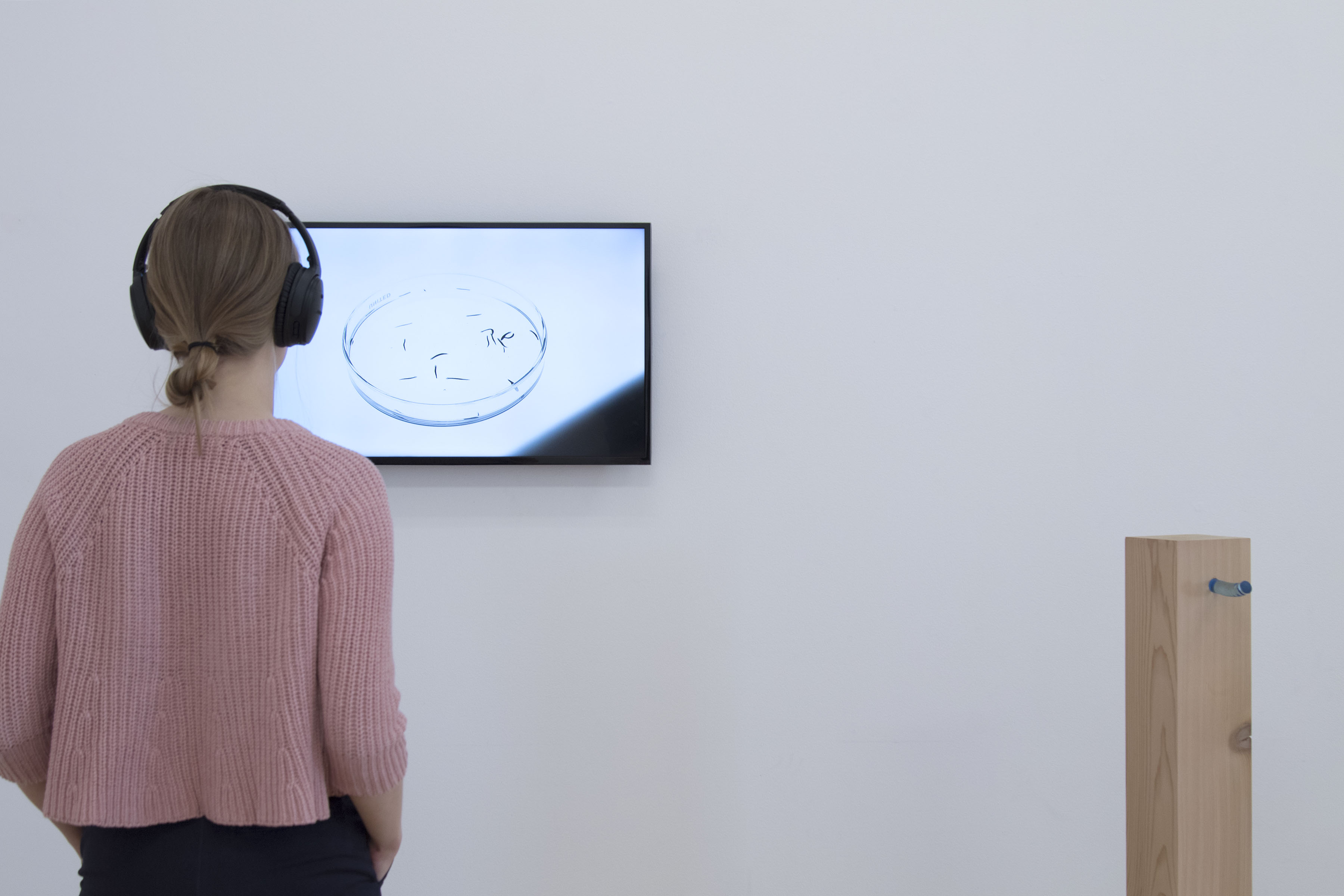 Walking into Elena Ailes’ show at Randy Alexander Gallery, “Spell to Bind the Monas,” one is met with objects on the floor and, in the far corner, a single, smallish screen on a wall.

My eye rolls around the floor, immediately following the edges of the poured acrylic resin piece, “untitled (spit in a cup).” The edges are unclean as they spill out of the purposeful grid. The material is messy although the structure itself is hard and brittle. You can walk on it, and it seems like it should be wet when it isn’t. I want to touch it. I want to feel the wetness contained behind the glossy hardened edge. My eyes are particularly drawn to small dots of glue in various places that adhere the object to the floor. This boundary—this site of flatness where two globular things touch—is the subject of inquiry in the show.

Acrylic resin and unresolved tactility reappear in the more solidly sculptural pieces in the show, “untitled (weeping as sculpture)” and “untitled (penetration as sculpture).” In the latter, two small spheres rest atop an unassuming cedar block with a glob of resin crawling off its edge. One of the spheres’ horizontal ridges breaks the soft form and forces you to follow the horizontal line as it bleeds onto the block and onto the grain of the wood. I imagine running my hands over the work. 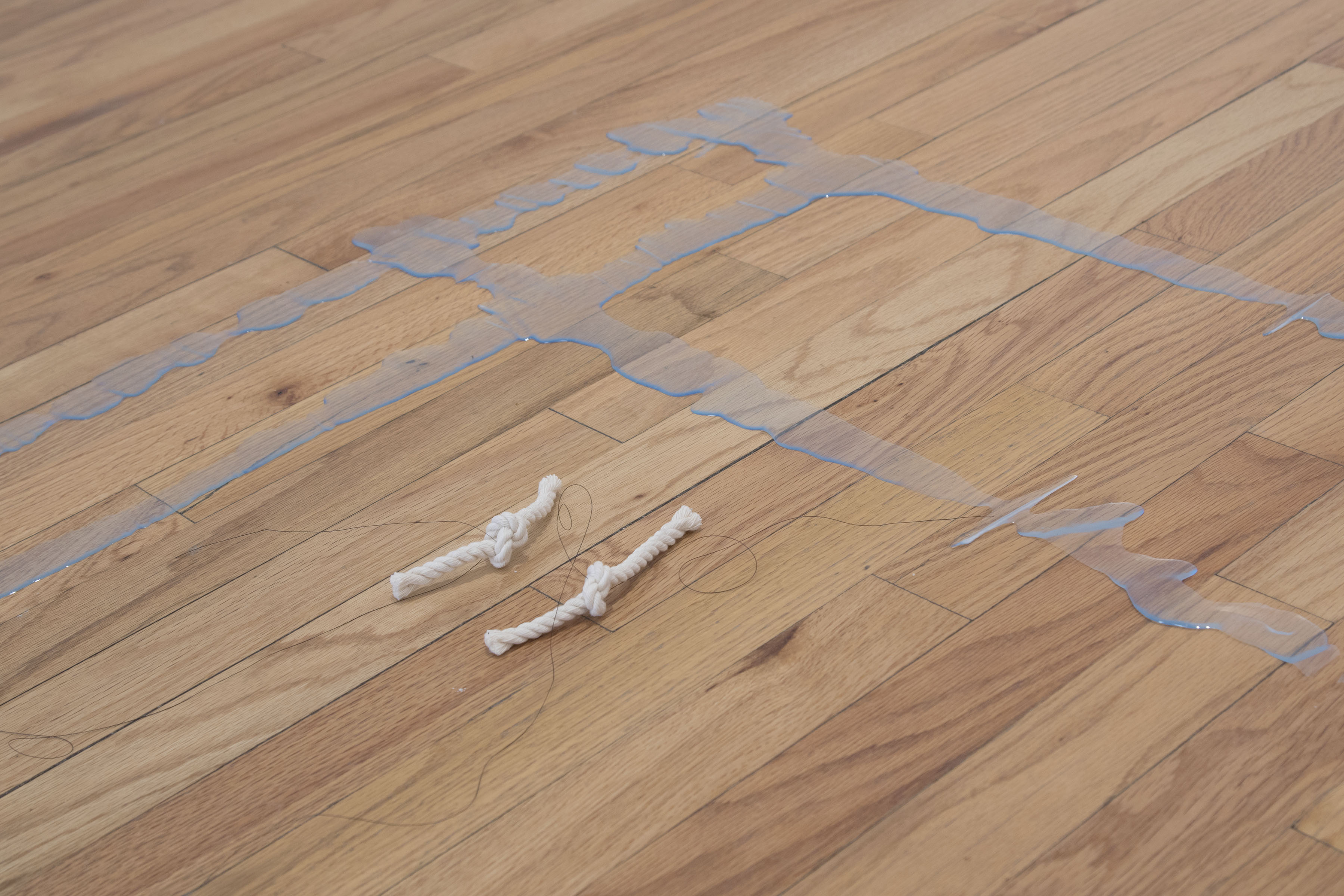 “untitled (weeping as sculpture)” takes frustrated tactility and transforms it into frustrated potential through its use of knotted rope and hair. Although the coils of the rope are taut, the cords are cut. The knots hold nothing together. The rope thus interrogates itself, or folds in on itself, to question its own potential. The knots in the rope and hair are serial, repeating both the question and the desire. Hair complicates the knotting gesture. There is a tiny pain that accompanies this procedure of removal or extraction. As a material, hair is full of its own contradictions—its hardness and softness, its strength and fragility. This direct presence of a human (or animal) quality through hair makes the show’s inquiry more explicit. These are not simply material investigations but personal ones. Danny, the drug dealer in the 1987 film “Withnail & I,” perhaps says it best: “Hairs are your aerials. They pick up signals from the cosmos and transmit them directly into the brain.” We walk through this world probing our environment with that which extends from within us. And yet our extremities are cut, are plucked, or they simply fall, but they are still active as they turn themselves inward, still probing the self in an attempt at communion with that which remains outside. 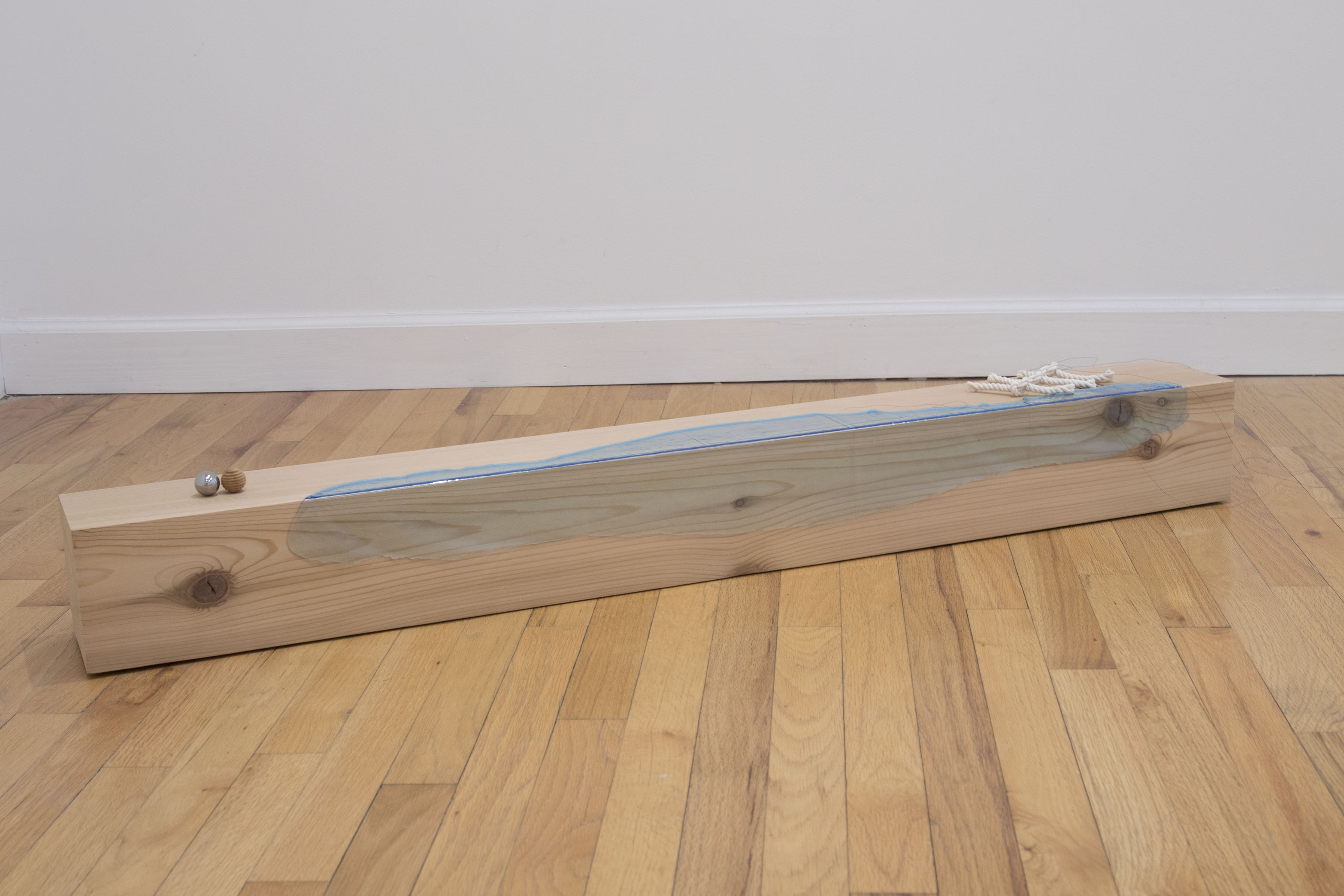 As my eyes leave the floor, I draw a breath as I encounter the film, “urchins and other self-orienting objects.” Three textual pieces are framed and reframed by shots that slowly zoom in on a petri dish full of swimming planaria, asexual flatworms that split to make two others: one grows a new head and the other grows a new tail. A poetic text overlays or intersperses shots of plucked feathers in the form of shuttlecocks flying through the air and hitting the outlined walls of a badminton court (a shape we recognize from “spit in a cup”) and a dildo strapped to a weather balloon launching into the air. Ailes’ text, regarding touch, presses itself into these images but it also slices through them by way of black title cards. As I watch this, it becomes clear that language too is an extremity. Like the hair coiled on the floor or the glue behind dried resin, language touches itself as it touches another.

In this way, Ailes’ show is a contronym—a word that contains two meanings that contradict one another, like the word cleave, which means both to break apart and to strongly attach. The contronymic appears in every aspect of the show including the titles, where unarticulation and articulation are joined through the curve of the parenthesis.

The show is an incantation of intimacy. Knowing something outside of yourself requires feeling alone. We cannot feel the edge of our fingertip without feeling another edge. These edges do not contradict each other but predicate one another. (Fulla Abdul-Jabbar)

Elena Ailes’ “Spell To Bind The Monas” shows through May 12 at Randy Alexander Gallery, 1926 South Wabash.