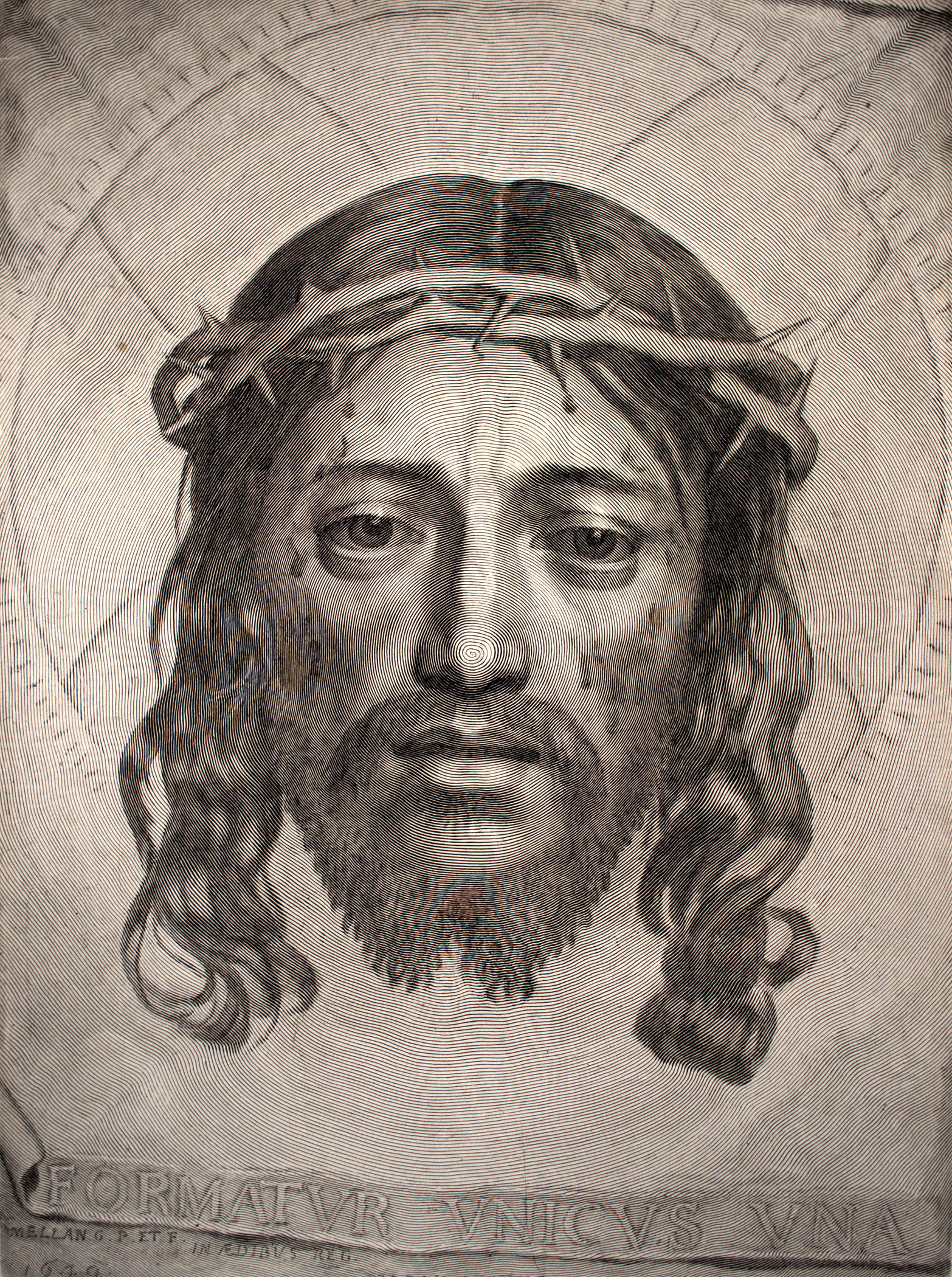 In “The Hangman’s Tree,” a haunting print by Jacques Callot, corpses droop from the tree’s thick branches as a priest brandishes his crucifix before the eyes of a man caught in the process of having a noose fixed around his neck. Despite the gory subject matter, the whole scene conveys an orderly impression. The tree is placed dead center, surrounded in a neat circle by a quiet crowd, and a few wispy clouds in the image’s upper corners complete the picturesque composition. Callot’s densely shaded tree and bodies bring out the surrounding negative space, underscoring both the graphic possibilities of etching and the picture’s didactic—rather than documentary—intent. The rest of the artist’s eighteen-print suite, usually called “The Large Miseries of War” (fully: Les Misères et les malheurs de la guerre, but generally known during its time as la Vita del Soldato, or “The Life of the Soldier”) to distinguish it from a smaller series of six prints etched around a year earlier, is displayed at the Smart together with the work of Claude Mellan in a small exhibition designed to accompany a seminar taught by Richard Neer. (Full disclosure: Professor Neer serves on my dissertation committee.) Following on the heels of last year’s Classicisms show, it shows how much remains to be mined in French art of the period. In a time when painters were deeply concerned with painting’s “mechanical” features (in the words of Roland Fréart de Chambray’s 1662 treatise Idée de la perfection de la peinture) and the proper application of mathematics to pictures, prints served not only as disseminators of knowledge but also as ambitious theoretical statements about art-making.

Callot’s portfolio presents the horrors of war with uncompromising force. Consider “Pillage of a House,” where a dramatic rape dominates the scene’s center as two soldiers hold a woman down and strip her clothes against vigorous protestations; another rape is shown in progress through a doorway on the right, while a soldier pursues a third woman on the left and the accouterments of home are transformed with little effort into instruments and sites of sexual violence. Long before Goya’s more famous “The Disasters of War,” seventeenth-century printmakers like Callot and Romeyn de Hooghe used their medium to publicize the atrocities committed by professional armies across Europe. While Callot’s soldiers bear no particular flag or uniform, unlike the protagonists in de Hooghe’s depiction of the French army’s predations of 1672, they easily fit the narratives of unchecked martial abuse that gripped European imaginations during and after the Thirty Years’ War.

Jacques Callot, “Pillage of a House” from the portfolio “The Large Miseries of War (Les Grandes Misères de la Guerre),” 1633, Etching/ Smart Museum of Art, The University of Chicago

And so it’s not difficult to see Callot’s images as pointed commentaries on violence, implicitly advocating the punishment of perpetrators as well as forcefully reminding audiences about the wartime terrors of murder, rape and torture. Indeed, art historian Diane Wolfthal has advanced a strong reading of the portfolio in which Callot condemns abuse and supports the use of both carrot (“rewarding the virtuous soldiers”) and stick (“severe punishment”) to regulate, rather than abolish, war. Modeled after earlier Flemish prints, as Daniel Ternois has shown, the “Large Miseries” are a bit too sedate to be truly radical, presenting forms of violence as the picturesque excesses of war rather than its vital superstructure. Less straightforward than Goya’s emotive works or de Hooghe’s anti-French polemics, Callot’s prints were easily assimilated to all sorts of ends in their day; they were collected by curieux, for example, and displayed in cabinets alongside fossils and ancient coins. Much as the wartime photographs of Larry Burrows and Richard Drew remained ethically ambiguous even as they showed dying soldiers and civilians, these works have more complicated lessons about the politics of representation to impart.

Claude Mellan studied under Simon Vouet as part of the wave of French students who flooded Italy even before the French Academy of Rome opened in 1666, then returned to France where his drawings, paintings and engravings were in high demand. His engraved version of the Sudarium, one of the most famous prints and, indeed, religious images to emerge from the seventeenth century, provides a suggestive counterpart to Callot’s portfolio. The work has occasioned much comment over the years, with observers marveling at how Mellan’s burin never left the plate as he traced out Christ’s eyes, cheekbones, and curly locks. Inspiring rivals like Matthäus Küzel, he engraved the entire image with a single flowing line. For the great art historian E. H. Gombrich, Mellan’s achievement prefigured the way that television prompts our eyes to assemble images out of dots: “the very eccentricity of [Mellan’s] caprice,” he argued in 1972, “shows how readily we learn to fall in with the code and to accept its conventions. We do not think for a moment that the artist imagined Christ’s face to have been lined with a spiral. Contrary to the famous slogan, we easily distinguish the medium from the message.” In fact, the medium was very much on the mind of Mellan and his contemporaries who analogized the relationship between divine presence and the human senses to the way “the burin renders a painting by scoring the copperplate.” The image’s making was part of its message, and the viewer’s sudden gasp at the artist’s virtuosity was to be taken as an invitation to wonder rather than something to be suppressed. As France increasingly boasted an art-viewing public of amateurs who tried their luck at drawing and printmaking, it’s certain that Mellan’s single line would have been noticed and appreciated.

Both Callot and Mellan were thoroughly enmeshed in the robust networks of artists, experimental and otherwise, who were transforming, and to a large extent creating, the European art world. The works displayed here may pre-date the concerted turn to intellection that characterized French art after the middle of the seventeenth century, dilating as they do on violence and religious devotion rather than secular knowledge and classical themes à la Poussin, but they convey something of the time’s ambition. These prints deserve long study. (Luke A. Fidler)

“Art in Seventeenth-Century France” shows through July 22 at the Smart Museum of Art, 5550 South Greenwood.