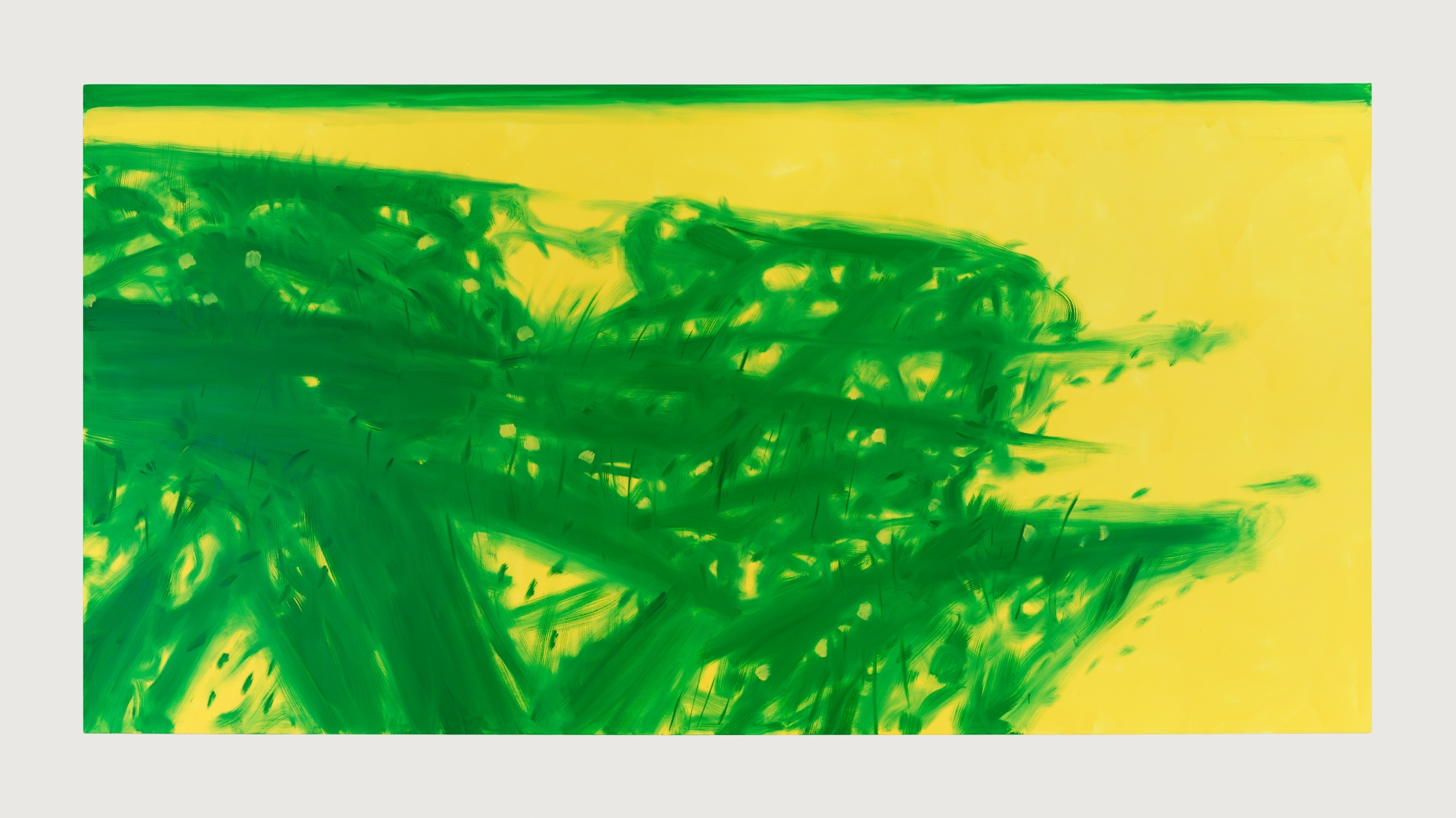 Like much art of the late twentieth and early twenty-first century, Alex Katz’s work must be seen as a reaction to and against what came before it, namely the all-encompassing specter of New York School abstraction. Viewers unarmed with that insight are likely to encounter Katz’s naively rendered figures, rudimentary compositions and insipid colors puffed up to monster-truck scale as “all surface, no feeling”—a critical assessment that has dogged the artist on and off for the six decades or more.

Now in his ninetieth year, Katz’s latest exhibition “Grass and Trees” at Richard Gray Warehouse seems set to upend the consensus that crystallized around the canonical painter’s oeuvre. Featuring a Geiger counter-spiking assortment of acerbic greens and yellows, the handful of billboard-sized paintings in his 2017 “Grass” series unapologetically plumb the style and syntax of last century’s gestural abstraction. It’s as though in his advanced age, Katz has ironically embraced the very thing that drove him to figuration in the first place. 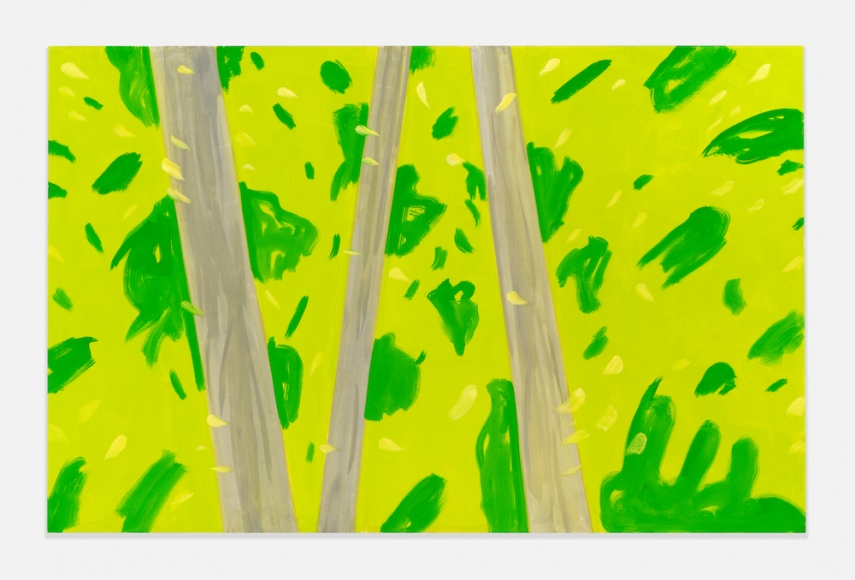 But the veneer of painterly bravura can’t disguise the fact that the aesthetic through-line in “Grass and Trees” is much the same as it always was: simple, flattened forms with an emphasis on the support’s surface. If, as critic John Yau claims in the exhibition’s catalogue, the “Grass” paintings “mark a radical departure from Katz’s earlier work,” I can’t see it. After all, one might employ several means of transportation and still arrive at the same destination. As to the “Three Trees” and “Road” paintings also on view, their compressed space, reductive shape and generic modeling of light and shade are classic Katz. 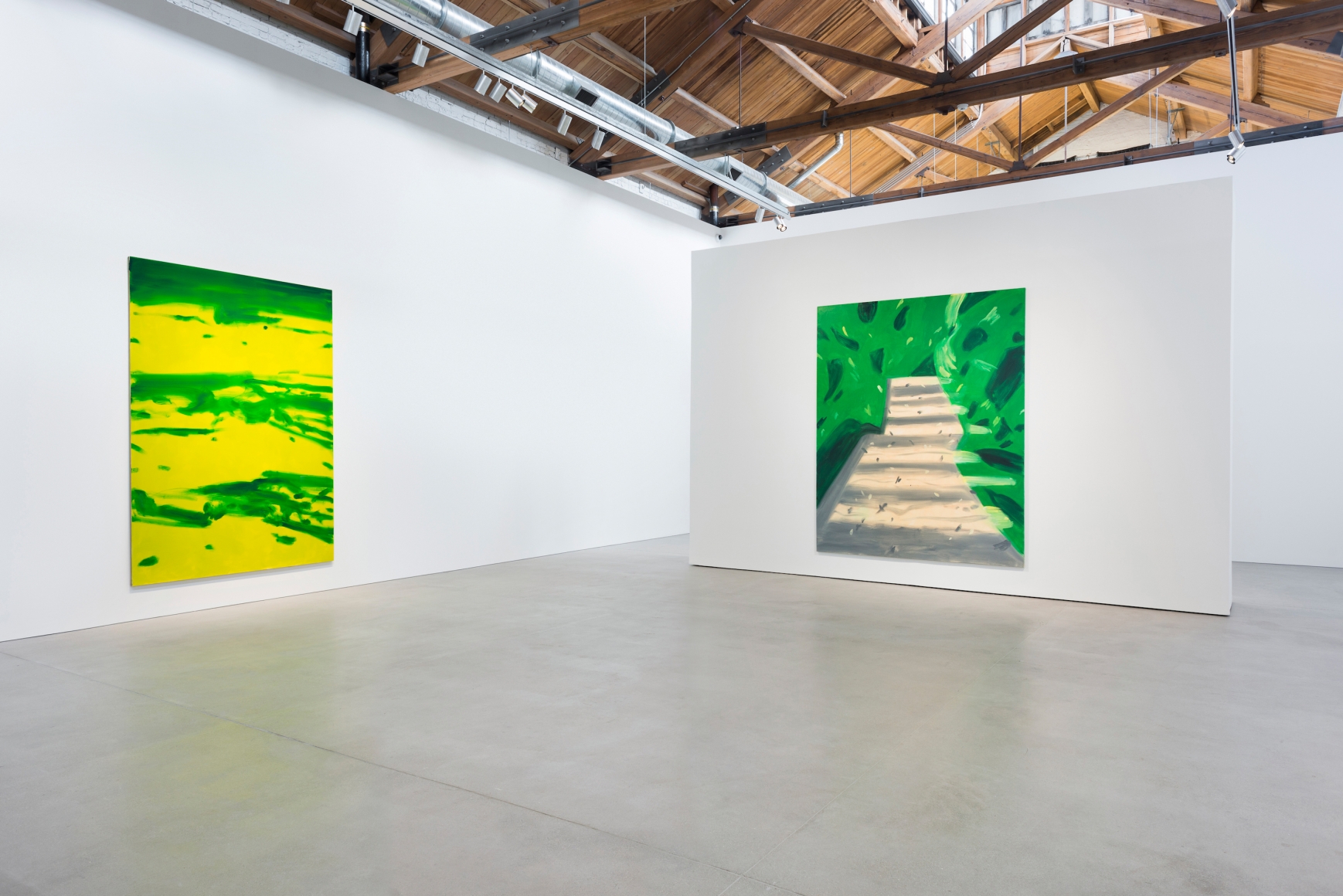 In defense of his return to figuration, the late painter Milton Resnick once said, “you always come around to what you hate.” In his case, the full-throated embrace of the figure was a natural consequence of an almost religious zeal for the materiality of oil paint. Like Pygmalion’s marble, fashioning the figure from paint became Resnick’s Galatea.

For Katz, the loosely brushed armatures of “Grass” numbers five, six and nine are neither a breakthrough into a new way of painting, nor a creatively necessary recant of his previous positions. Rather, these works are recapitulations of a lifetime directed at painting in quotation, of looking at the world and finding a visual shorthand for it. Fans of Alex Katz will find their predilections confirmed, while doubters will remain unconvinced. (Alan Pocaro)

Alex Katz “Grass and Trees” is on view through June 2 at Richard Gray Warehouse, 2044 West Carroll.