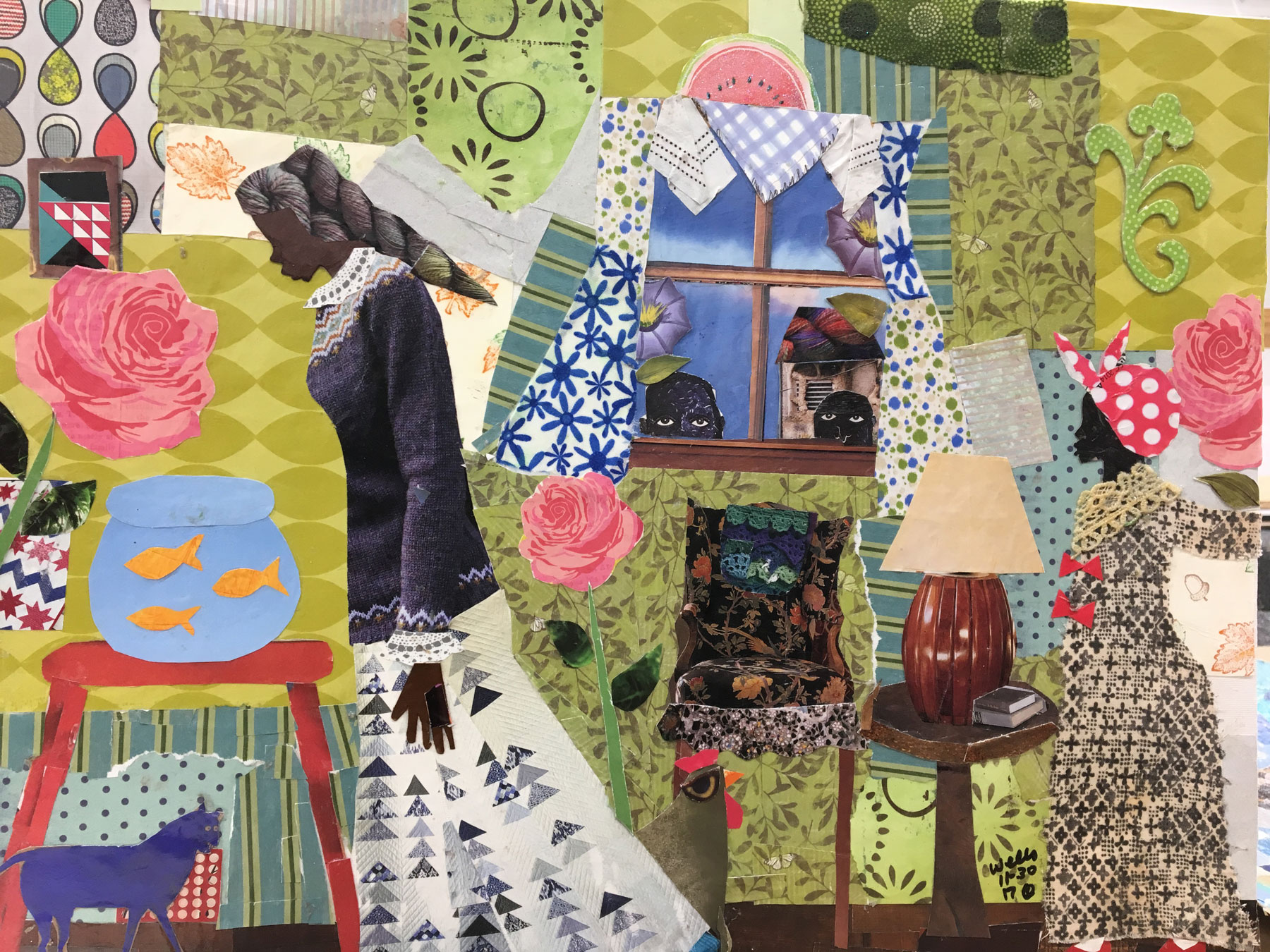 Hope and despair slug it out in the collages of Milwaukee artist Della Wells, just as that struggle plays out on the much larger stage of national politics. The prominent visual feature is the natural elegance of human faces and bodies, crisply painted or cut from paper and profiled against a variety of patterns. In the saddest piece, “Alice was not meant to live the American Dream” (2009), a blizzard of American flags are glued to a board behind the poor departed woman’s sagging red tunic encrusted with tchotchkes and yet one more American flag. In the most buoyant piece, “This is a we day” (2017), a woman in a cheerful red dress strides through a summery green yard of flowers, trees and playhouses. In the most puzzling piece, “Seek” (1994-2011), the central squares of a large quilt are identified as a woman’s torso by the face above and the feet below. Yet still they are locked in a geometric pattern with the squares that surround them. The artist says that she works a piece until it feels finished. This piece took seventeen years, yet it still does not tell me what this character is seeking. Is it spiritual, material, political or sensual? She appears too immobile to be actively seeking anything.

The self-centered dreamworld of surrealism and the righteous politics of social justice cohabit this entire body of work. Anger, humor and whimsy are often combined, as in “Don’t be unhappy, Miss Anne, because we too carry the American flag” (2017). Draped in a regal gold and purple quilt, wielding a flagstaff like a cudgel, the proud black woman confronts her white antagonist who turns to give the viewer a tight-lipped smile. It’s not likely that Miss Anne is going to change her mind, but the white lady with the long, lovely legs is certainly less threatening than all those angry male uber-patriots who rant on talk radio.

Intentionally or not, several pieces reference the canon of African-American art. “Preach Sister Preach” (2015) compares well with the Genesis Series of Jacob Lawrence. Lawrence offered more virtuosity of space and color but Wells has captured a moment of greater magic. The flying woman really does fly, the fishes really do multiply and the congregation is more unruly and alive. “Marla take my chicken while I get my hair done” (2017) compares well with “School of Beauty, School of Culture” (2012) by Kerry James Marshall. The Wells piece is less monumental, but the viewer is more likely to become immersed in the company of women at the beauty salon. One might also notice that Wells offers a wider gradation of skin tone that’s more reflective of actual African American skin tones rather than the concept of pure blackness asserted by Marshall. “Time for bed, my chicken” references iconic folk artists, both in the pattern on the woman’s dress, and in the background text that’s been torn from the book, “Gee’s Bend, the women and their quilts.” 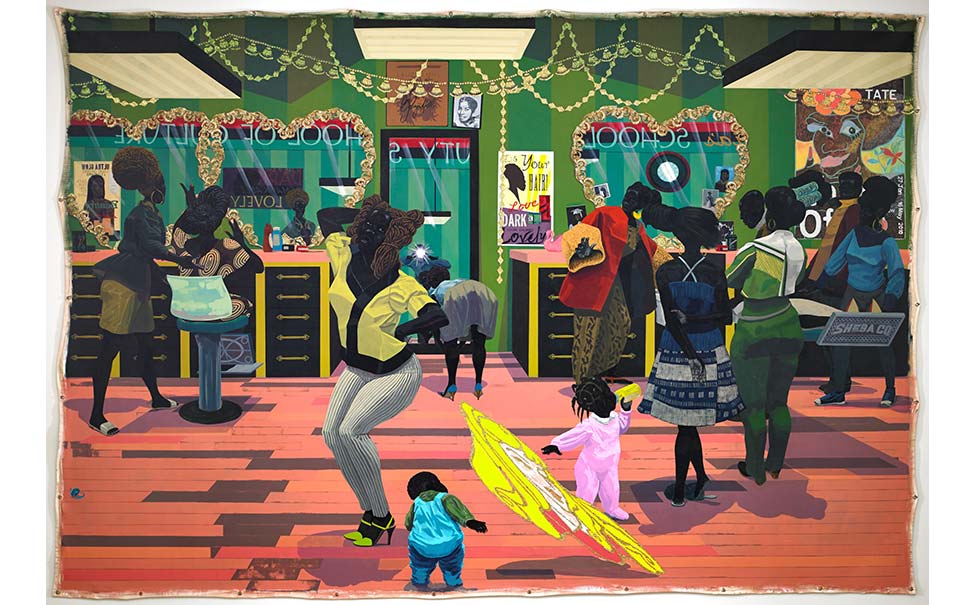 Other corners of the art world may be echoed as well. “If they peer in my house, Matisse” (2017) depicts two boyish black faces peering through her window to see a Matisse-like goldfish bowl and abstract patterns. Other pieces share the playful defiance of the Chicago Imagists, the gestural chaos of the abstract expressionists or the modernized folk art of Marc Chagall. Though self-taught, Wells seems well acquainted with the world of art. Sometimes the artist delivers a sense of triumph and strength, perhaps associated with the watershed events of the Civil Rights era that occurred in her own lifetime. Other times the space feels cluttered, sad and claustrophobic, and it’s hard to ignore the absence of adult males. These works serve to document something much more historic than just the artist’s own life. (Chris Miller)

“Her Story, My Dreams: The Images of Della Wells” shows through June 2 at Loyola University Art Museum, 820 North Michigan.