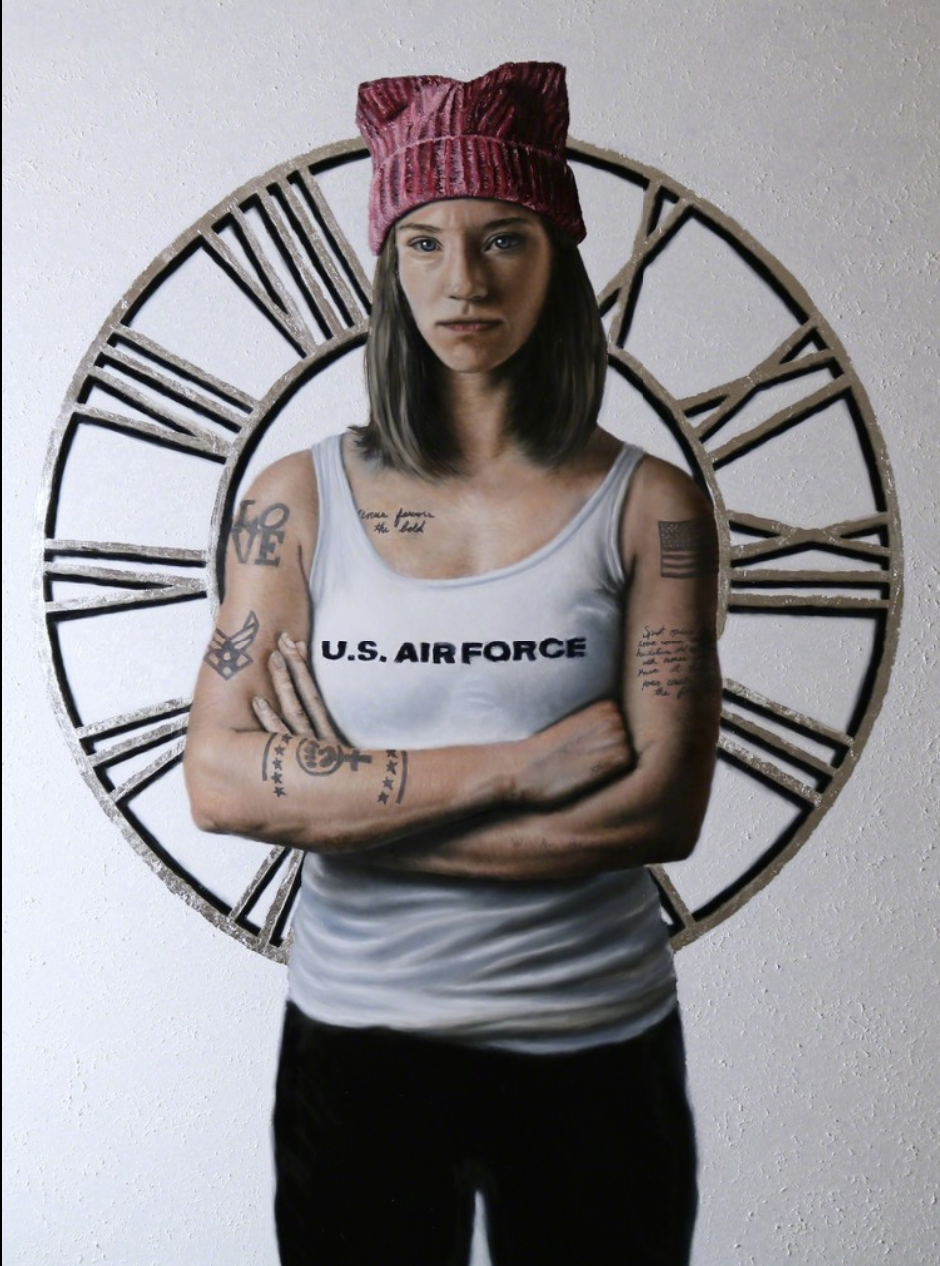 “Visions of Venus” is a daring theme for an art exhibition these days. The #MeToo era is perhaps not the best time to reanimate a historic patriarchal cosmology which offered naked nubile females for male delectation. Such imagery was prolific in European styles from the Renaissance through the mid-twentieth century. Since then, it has vanished from high art, unless highly expressionistic (de Kooning) or ironic (Wesselman). Elsewhere it continues to run as strong as ever in ongoing traditions including Classical Realism, Impressionism and pin-up girl illustration. This exhibit has mostly attracted practitioners of photorealist montage, several of whom are skillful at reproducing the kind of slick, mechanically contiguous visual field found in photographs. Apparently, there are many women, as well as men, who can never see, or paint, enough attractive females. In this exhibition, thirty-three of the fifty-three artists are women.

Almost all the artists here seem more concerned with the immediate impact of a clever, appealing or humorous idea rather than the formal qualities that can support sustained viewing. It’s not surprising that several of them have careers as illustrators. Most of these illustrations parody or undercut traditional mythology. In one of the most poignant pieces, New England artist Christopher Cart presents a nude woman turning away from her mirror in confusion and dismay—perhaps she just realized that she is no longer nubile. In another engaging piece, Polish artist Anna Wypych shows us a “Venus/Demon” who appears to be sexually available but also threatening. Don’t most sexual relationships end badly for someone? Chicago artist Kyrin Ealy Hobson shows us a struggling African-American family where the powerful stare of the mother is contrasted with the awkward, shy glance of the daughter. For many women, sexual appeal might be the least of their concerns. 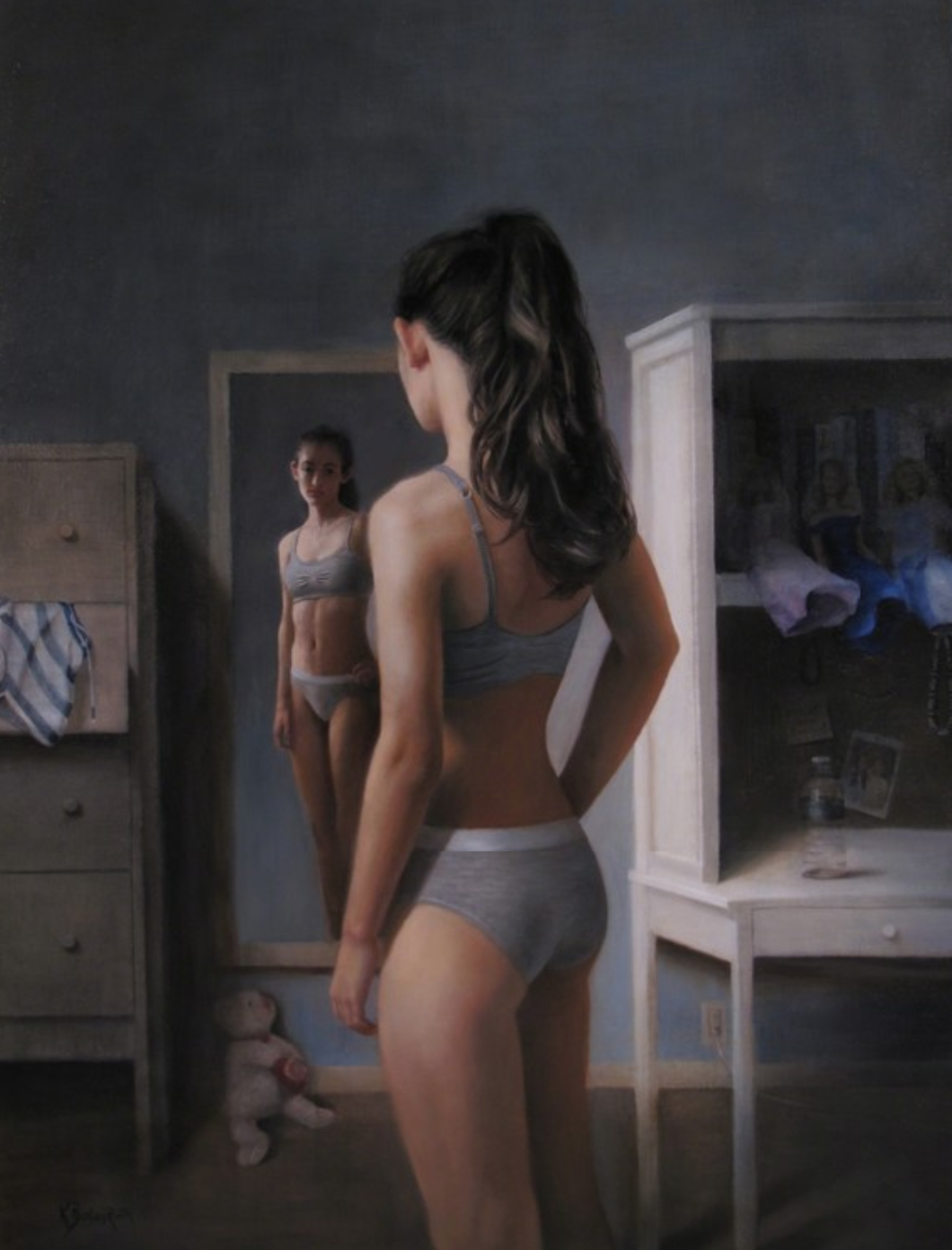 Several pieces seem completely untethered to the stated mythological theme. The Scottish painter Graham Bruce Richards has copied an area from his painting called “Child’s Play” and renamed it “Visions of Venus” with the only notable difference being that the young girl is now holding a bottle full of dragonflies instead of tadpoles. California artist Tyler Streeter specializes in painting pugilists and his “Combattente” presents a young woman wearing boxing gloves. Wouldn’t that piece have fit better in last year’s “Woman as Warrior” show, also sponsored by Didi Menendez?

For those who follow art history, the most interesting work could be the updated versions of old masters from Botticelli to Bouguereau. By comparison with the originals, all of them are disappointing, some painfully so. “Venus Contemplating her Adolescence” by Kelly Birkenruth, however, is an interesting variation of “Venus at her Mirror” by Velázquez. Where the great Spanish painter has us cherishing the lady’s tender bottom beneath her reflected face, Birkenruth has us sharing an adolescent’s self-realization of her changing body. Birkenruth has given us a more serious theme while echoing the Baroque master with sharp drawing and subdued tones. I just wish the pictorial space felt less cramped. 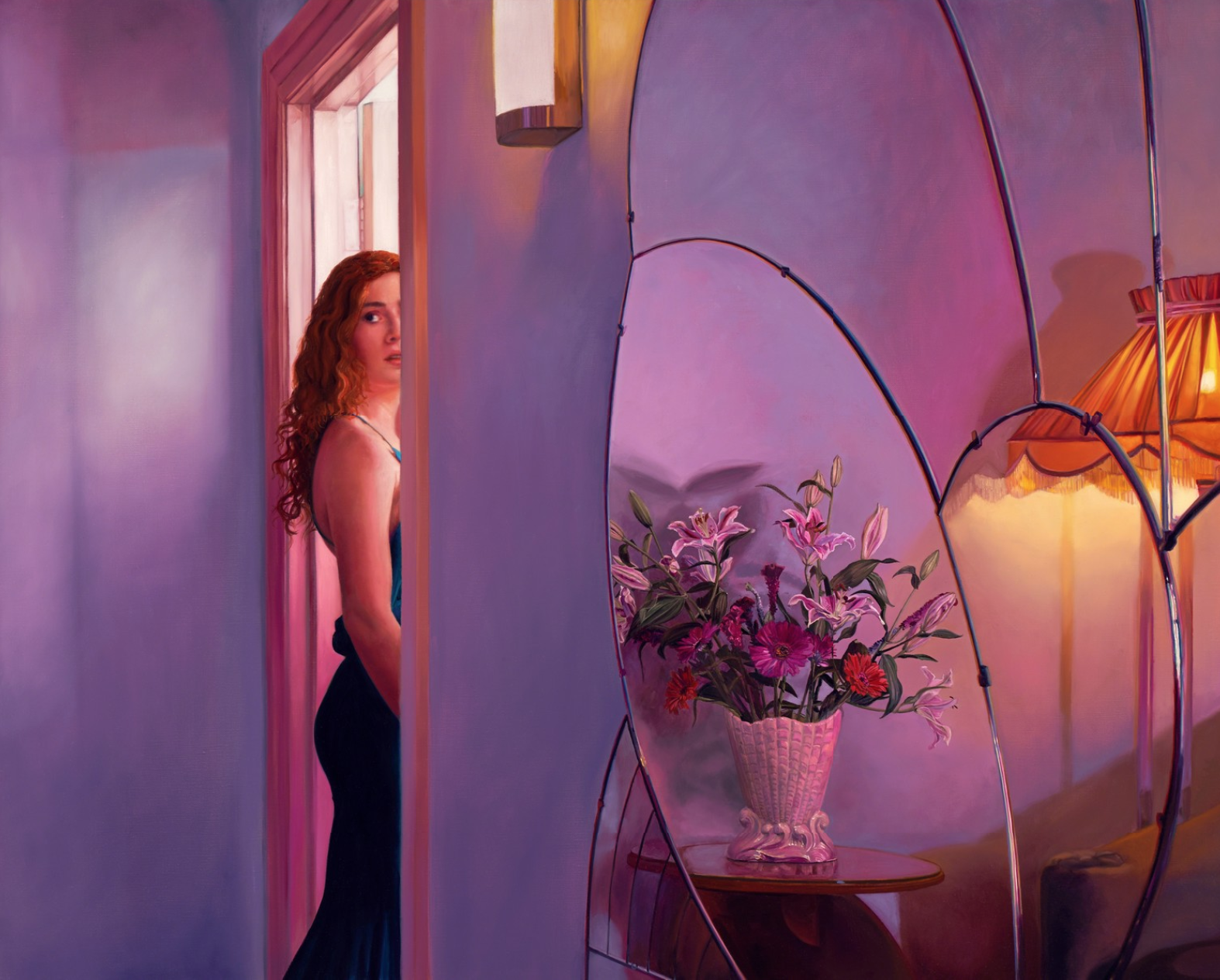 “Venus Leaving,” by the Australian painter Dianne Gall, is the only painting that gives any sense of a supernatural erotic presence. This Venus is fully clothed as she slips out the door, but the pictorial space is so disrupted by reflections and saturated with floral colors, I feel overwhelmed by disembodied desire. The other pieces in the show are more like “the embodiment of all things feminine,” which is how the curator has elaborated on her theme. Apparently, however, she does not feel that femininity can be embodied by males, for the only men depicted in the entire show are the three big-headed louts that Jodi Gerbi jammed up next to a working-class Venus in a subway car.

The curator, Dr. Elaine Melotti Schmidt, has a special interest in figurative realist paintings of women made by women and she sponsors an annual award to promote it. Her preference for photo-realism, however, is more suitable for fantasy illustration than mythopoetic art. Probably that’s just fine for her and her intended audience for this show. For me, however, too much is missing, including Venus herself, who can actually be more present in a non-figurative painting like Mark Rothko’s looming patches of scarlet and magenta now hanging at the Smart Museum. (Chris Miller)