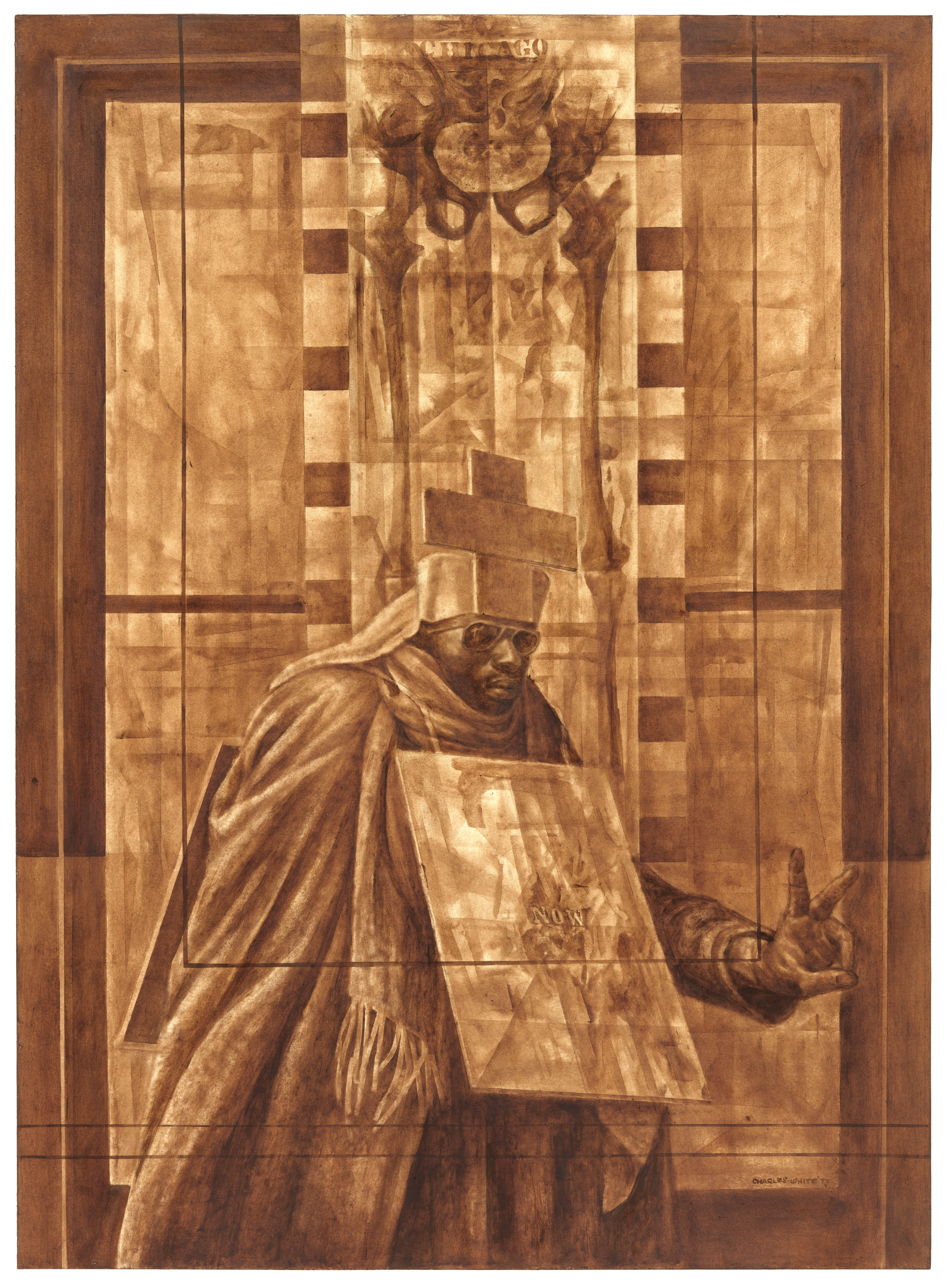 By 1968, Charles White had witnessed the Great Migration, the Great Depression and World War II; McCarthyism and the “Red Scare” of the 1950s; the Civil Rights movement, Black Arts and Black Power movements as well as liberation struggles that emerged from the remnants of colonialism and imperialism around the world. A retrospective—the first major one in more than thirty-five years—runs a thread through the optimism of his politics and how politics permeated his art.

Through approximately one-hundred works spanning painting, drawing, photography and printmaking, the Art Institute’s presentation of the exhibition also highlights the influence of locality in White’s oeuvre. Chicago, New York and Los Angeles—the cities he called home—each offered different synergies and challenges for White to navigate politically and socially, yet in each city, he took a nuanced and particular approach. The retrospective, organized chronologically, is sprawling and extensive, and though White remained committed to creating “images of dignity” throughout his career, the linear presentation of the works sometimes dilutes the power of White’s singular focus. 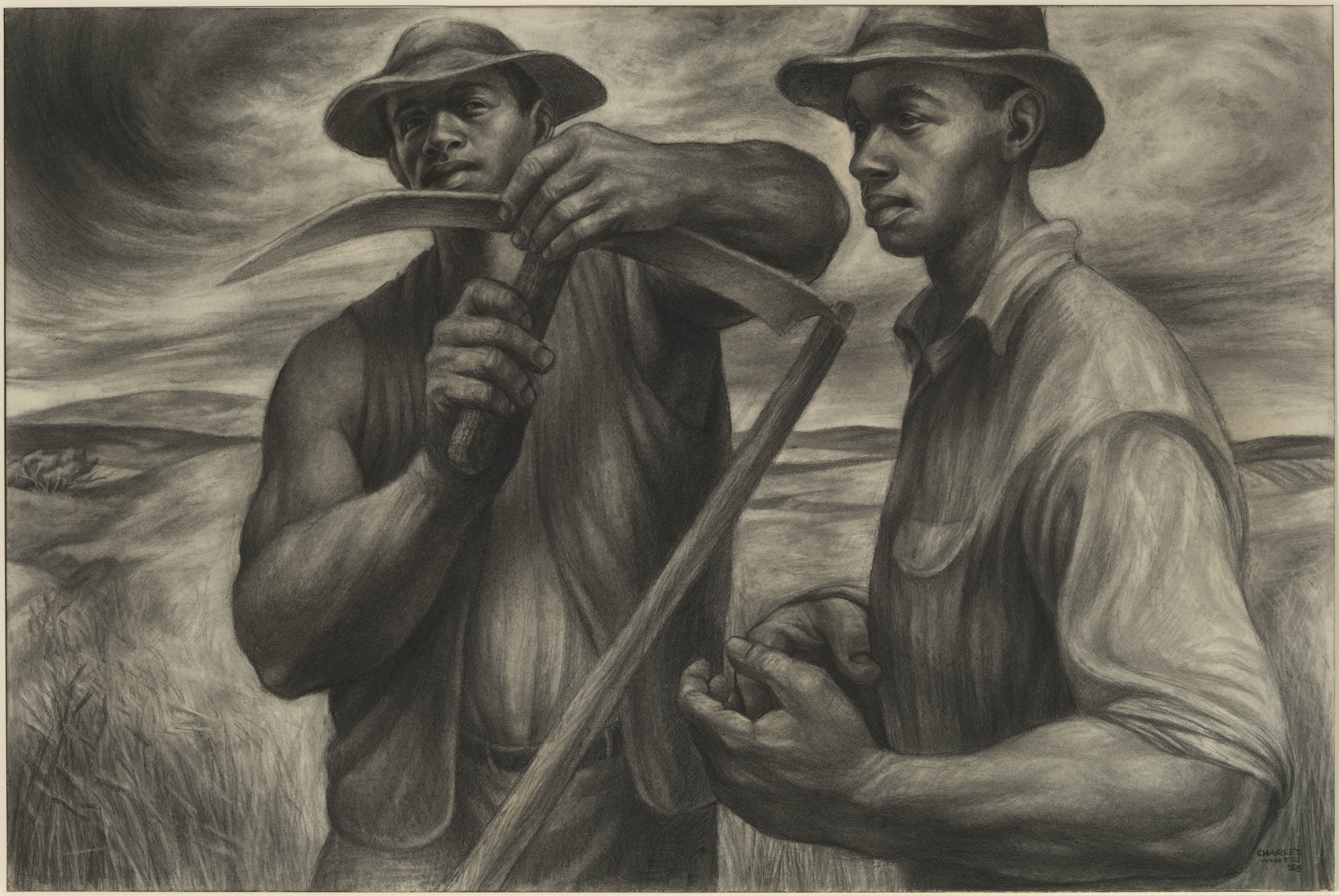 White developed an interest in amplifying the neglected histories of African Americans after exposure to the works of writers like Arturo Alfonso Schomburg and Alain Leroy Locke during frequent trips to the library as a youth. Early exposure to art, from summer workshops at the Art Institute to encounters with renowned Chicago-based artists including African-American painter George Neal and Polish-Jewish immigrant Morris Topchevsky, instilled in him a life-long commitment to racial equality and Marxist socialism. Topchevsky’s personal experience of ethnic violence in his homeland and again as a witness to Chicago’s 1919 race riots made him sympathetic to the plight of black Americans. His work in Bronzeville on the city’s South Side immersed him in the culture, and both White and Margaret Burroughs were his art students.

White’s signature drawing style, filled with impressive depth, volume and detail, was perfected after his discovery of the Wolff’s carbon pencil as a teen. Although less greasy than lithography pencil or wax crayons, the Wolff carbon pencil shares many properties lithographic technique produces, such as the range and depth of color. Many artists, seeking to replicate this aesthetic in their drawings, turn to a number of techniques, but for White, using the Wolff pencil produced stunning returns. White’s mark-making was studied and effective, and he used different media based on the effect he wished to convey in a work: pen-and-ink was used for a more linear approach, much like the pre-1950s angular and semi-naturalistic paintings and prints; charcoal, Wolff pencil and conté allowed him to provide a depth, volume and detail to his drawings that his painting and print technique could not provide. His prints through the 1950s relied on a range of blacks, which mirrored the aesthetic achieved from the works he made with pen and ink.

White was hired as a mural painter for the WPA program Illinois Art Project (IAP) soon after graduating from the School of the Art Institute of Chicago. For the IAP, he worked on four mural commissions—three of which were completed—including “Five Great Americans” (1938), a work featuring the freedom fighter Sojourner Truth (appearing like the Cumaean Sibyl from Michelangelo’s Sistine Chapel), the postbellum leaders Booker T. Washington and Frederick Douglass, George Washington Carver, and the famed opera singer Marian Anderson. The painting served as a visual representation of cultural progress for African Americans, and as a fundraiser for what would eventually become the South Side Community Art Center (SSCAC). Once the SSCAC opened, White taught life drawing there and donated works to the center’s permanent collection. 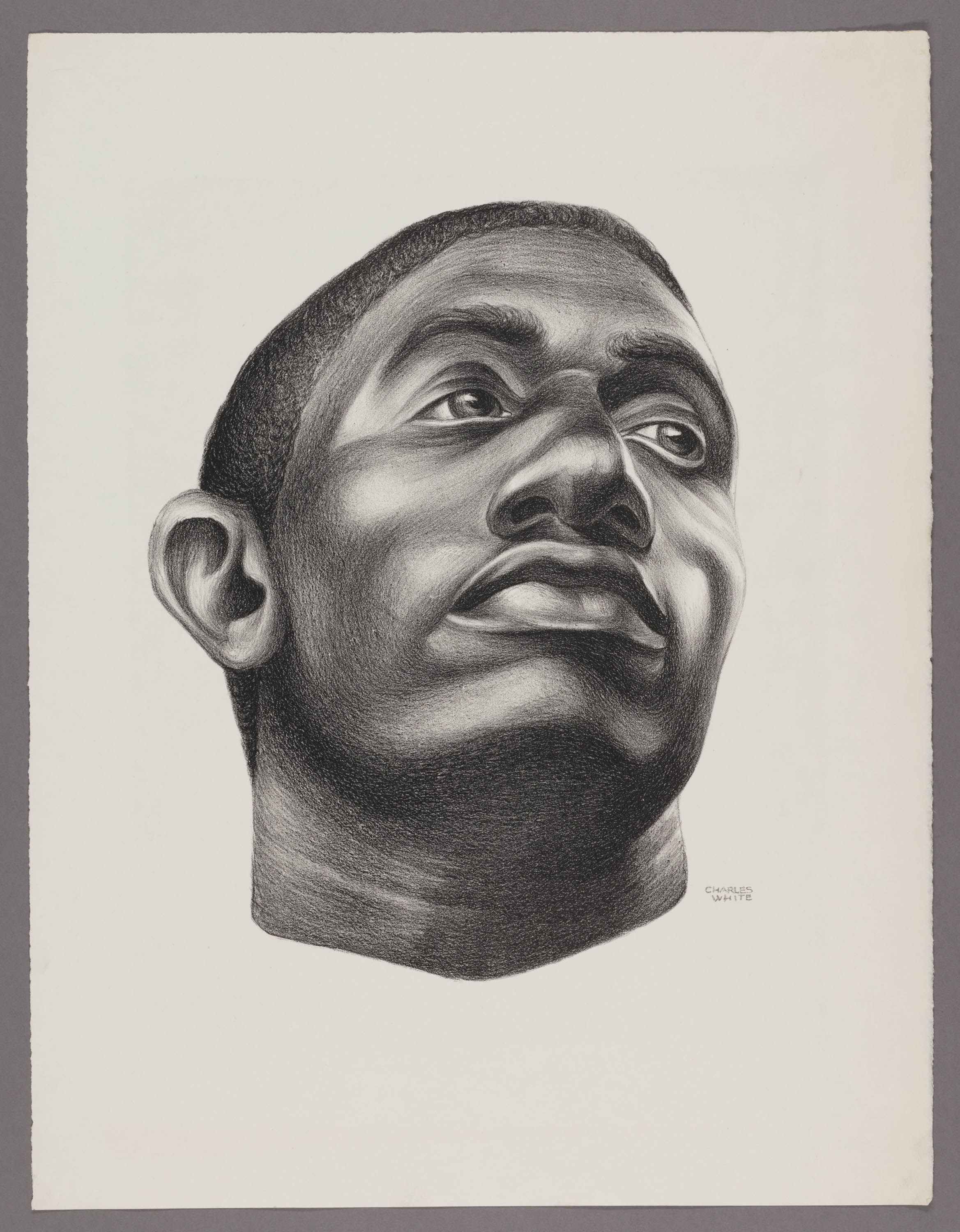 White’s printmaking practice receded while he painted murals for the IPA and “Laborer” (circa 1939-40) is one of the only known lithographs that survived this period, the last of his Chicago years. A man holds what is likely a steel bar, closely cropped to focus the viewer’s attention on the person rather than the source of their labor or context. White often highlighted the dignity of the subjects in his paintings, a proclivity likely influenced by radical visual social commentators such as Courbet and Goya. White’s subject matter often aligned the artist with labor movements and “the masses” of Marxist socialist thought rather than elites and leisure. White’s 1940 drawing “There Were No Crops This Year” appeared on the cover of the “Exhibition of the Art of the American Negro (1851-1940),” a turning point in his career. This image, another close crop, similar to “Laborer,” features two farm workers, one of whom holds an empty feedbag, succinctly summarizing the devastating effects of the Great Depression and Dust Bowl on subsistence and tenant farmers, as well as sharecroppers.

Shortly after moving to New York City with his first wife, the artist Elizabeth Catlett, the couple traveled to Mexico City in April 1946 to study with Taller de Gráfica Popular (TPG), a graphic arts collective. White began printing lithographs in earnest again, and he experimented more with linoleum-block printing techniques, popular with the Mexican and Soviet leftist artists he admired. Much like the country’s more prominent mural movement, TPG also sought to make art accessible to the masses via media like posters and flyers and with literacy programs for workers. After returning to New York City from Mexico, White took up teaching to supplement his income from artwork sales, and soon befriended the artist Robert Blackburn, and continued the printmaking experiments he began at TPG.

With his second wife, White traveled to the USSR and Eastern Europe. His work and reputation as a friend of the laborer preceded him, as his works had appeared on the covers of a number of leftist magazines. With exposure to work he’d seen in the Soviet Union as well as from his days studying in Chicago, White grew confident in his decision to create more naturalistic looking figures in his work. Previously unsure, he created figures that shifted between the blocky, angular styles seen on propaganda posters and the more realistic figures he’d studied and learned to render as a student. His 1953 exhibition at New York’s progressive American Contemporary Art Gallery (ACA) was the first to feature work made with this new direction. In “Harvest Talk,” (1953) White’s facility with Wolff crayon and with naturalistic figures is on full display. Two muscular men stand in a field, shown from the waist up. Their powerful arms and hands signify their station as field workers, and one sharpens a scythe, a nod to the Soviet revolutionary symbol. In the background, the wheat fields seem to undulate gently, matching their serene expressions. After, White rarely returned to pre-1950s mannerisms. 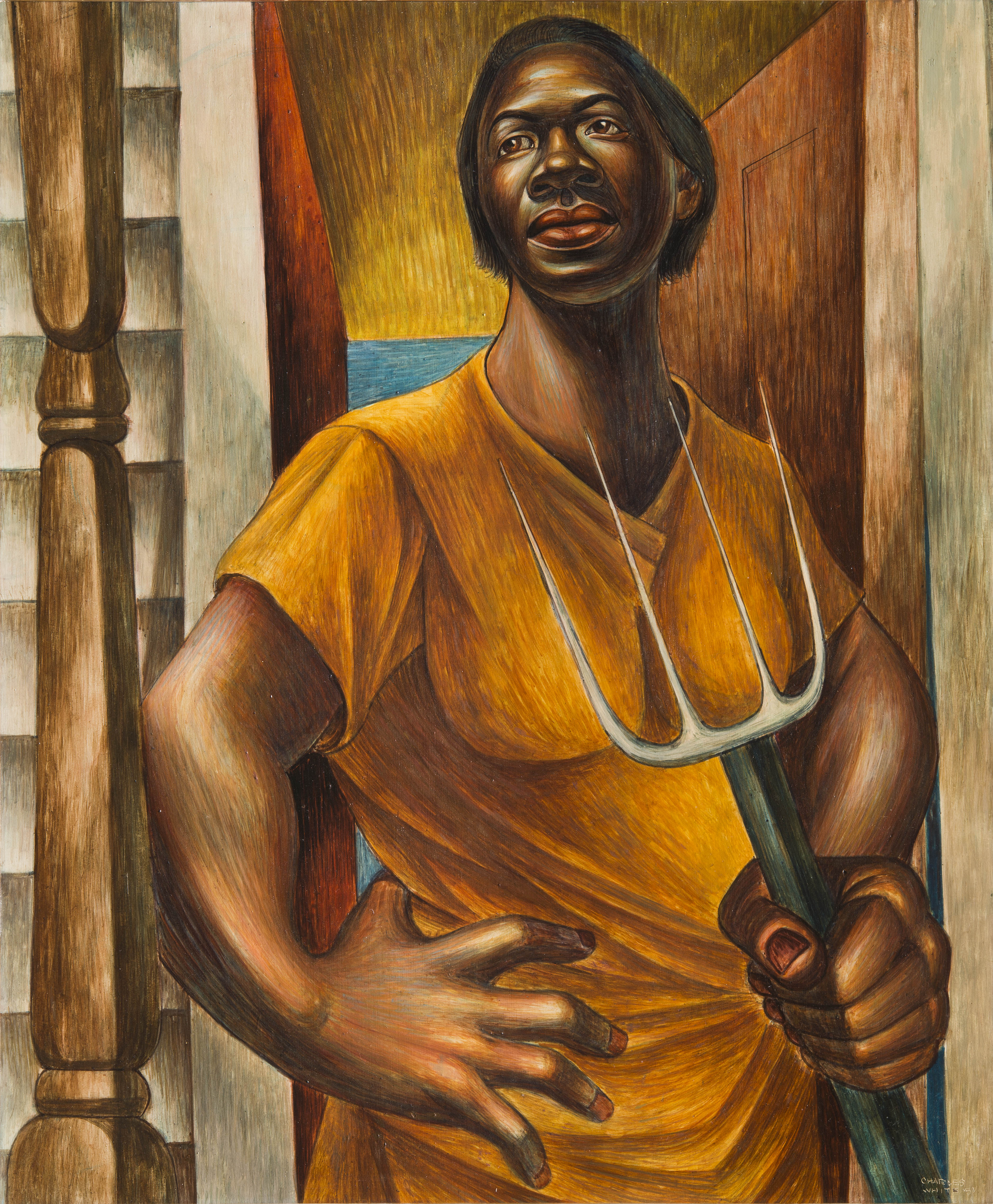 The retrospective briefly showcases White’s photographs—New York street scenes, family and friends—some of which would serve as studies for future egg tempera paintings such as “Gospel Singers” (1951). The mid-1950s also took White and his third wife to Los Angeles, seeking relief from the effects of the tuberculosis infection he contracted in New York. Los Angeles and its art scene at the time were years behind the intellectual sophistication of New York and Chicago, but this did not deter White from political involvement. He allowed his name and artwork to be used as cachet for fundraising and support during the Civil Rights movement, for example. Upon arriving in Los Angeles, White would liken the city to a big country town, realizing he needed to navigate its groups and factions differently to have an impact. Most artists fell into one of two camps: those who valued traditional figuration to convey black pride and those who preferred newer techniques such as performance and abstraction, or assemblage to achieve those means. Eventually, White became influential enough to convince the Los Angeles County Museum of Art (LACMA) to focus on L.A. artists and include contemporary work rather than solely existing to compete with New York’s Metropolitan Museum or Chicago’s Art Institute and their dedication to old European masters. Soon, LACMA became one of the only places black artists living on the West Coast could show their work outside of their own neighborhoods.

White continued to grow in influence and impact in southern California. He joined the faculty of Otis College of Art and Design in 1965, and inspired a number of artists and former students to open commercial galleries and organize festivals and events celebrating black arts and culture. He also took up printmaking in earnest, and with the help and encouragement of younger students, began to move away from the blacks and grays of his previous prints to incorporate color. Around this time, he began experimenting with a new medium, oil wash, for his drawings, its range of browns and sepias becoming his new monochrome.

Today, White’s work and his belief that artists have a responsibility not only to reflect the world but also to use their art as a catalyst for change has taken on a new relevance, making this retrospective, which travels to the Museum of Modern Art in New York and the LACMA in the coming year, very timely. With striking renderings including the “J’Accuse” and “Wanted Poster” series, White created powerful visual indictments of systemic racism and oppression. With every image, White contributed to amplifying black culture, encouraging the establishment of vibrant creative communities. (Lee Ann Norman)

Charles White’s “A Retrospective” shows through September 3 at the Art Institute of Chicago, 111 South Michigan.