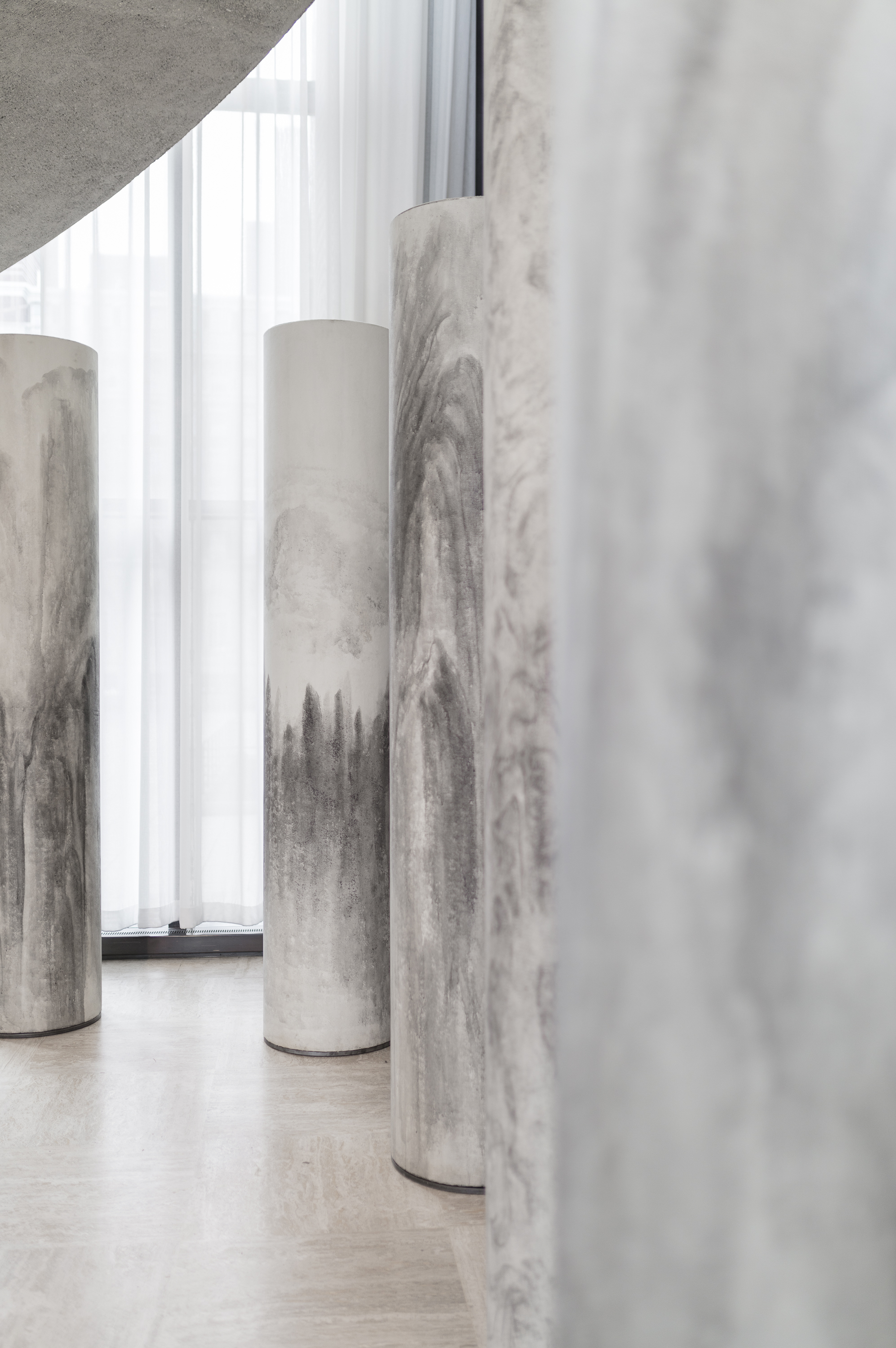 I can’t remember a more ambitious contemporary installation than “Light of Heaven” at the Art Institute of Chicago, or anywhere else for that matter. It completely fills the Ando Gallery and proliferates into six other rooms. Each monochromatic painting has been specifically designed for its location. In the Ando, for instance, each of the three walls is covered by ink paintings of a particular size, proportion and theme. Similar paintings wrap around three ten-foot columns that measure the space between those walls. The effect is of total immersion. Everything is tied into one grand scheme, yet this is not just wallpaper. Each series and each piece has a specific character. The installation that fits within the spiral staircase in gallery 135 is the most spectacular. A towering thirty-foot column, wrapped with painted white felt, reaches up to the museum’s second level. Twelve ten-foot columns, like shorter peaks, rise around it.

Yet even more ambitious than the scale of these installations is their cultural significance. This is not just a revival of traditional Chinese landscape painting, it is also its reinvention within a context that is more international, more public, and less aristocratic. In earlier centuries, Shan shui (mountain-water) painting exemplified a personal union with the underlying forces of nature and a liberation from the grind of daily life. It was directed toward an abstract mental state rather than a specific scenic view. It was more a spiritual practice of the leisure class than an occupation for skilled artisans, even if such categories may not be mutually exclusive. 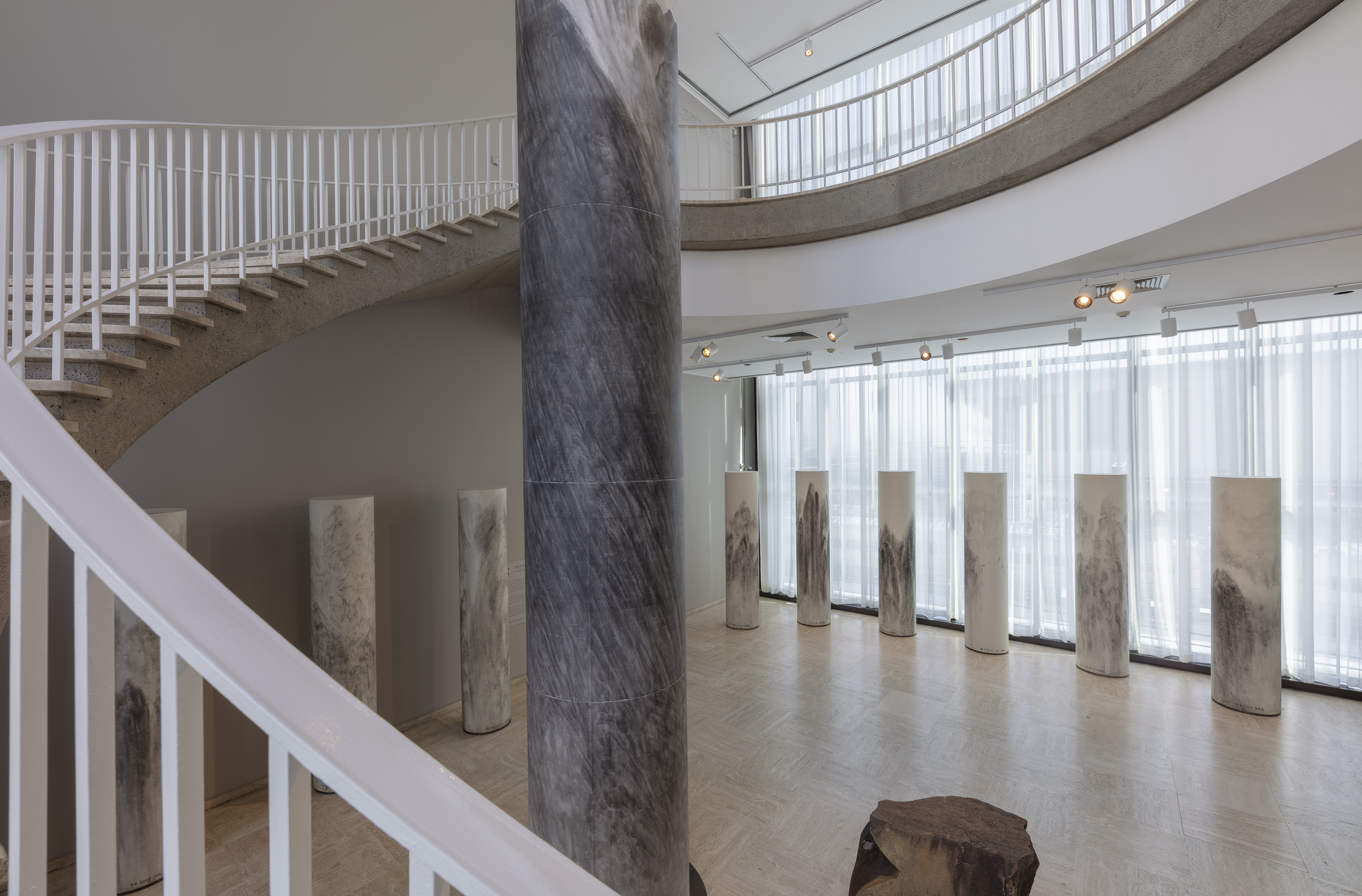 Like the educated bureaucracy that practiced it, Shan shui has been in decline for several centuries. The most celebrated examples date back to the Ming or Song dynasties. There was a power and total commitment about that historic work that waned in the eighteenth century and was nearly obliterated in the twentieth. Xu Longsen has reclaimed some of that power and scaled it to a more public context. Rather than a treasure that an elite artist-scholar might share with a few close friends in his private study, it now can dominate a lobby or boardroom that may hold dozens or even hundreds of people.

Unlike most historic Shan shui, Xu’s views do not include detailed renderings of any rock, animal or foliage. He has aimed directly at great cosmic forces rather than embedding them in sharply drawn detail. His forms feel more open than closed. They are fluid like water or smoke. Not even his mountains feel solid and heavy. They are more like luminous energy erupting from the earth like a lava flow. He seems to be showing us the universe as it was being created. Matter is energy, a fundamental principle of ancient Taoism as well as quantum mechanics, and a species of wispy energy dances throughout each piece. The symphonies of darkness and light feel as spiritual as William Blake’s engravings for the Book of Job.

What’s missing in Xu Longsen’s visualized philosophy is people. Historic Shan shui usually included a few human figures or structures, large enough to be recognizable as such but small enough to indicate their relative insignificance in the greater scheme of things. There is nothing human in this entire installation. Even the artist’s own personality is concealed by the power of natural forces. The universe created us—and will destroy us—and there’s not a damn thing we can do about it. Morality and human history are irrelevant. 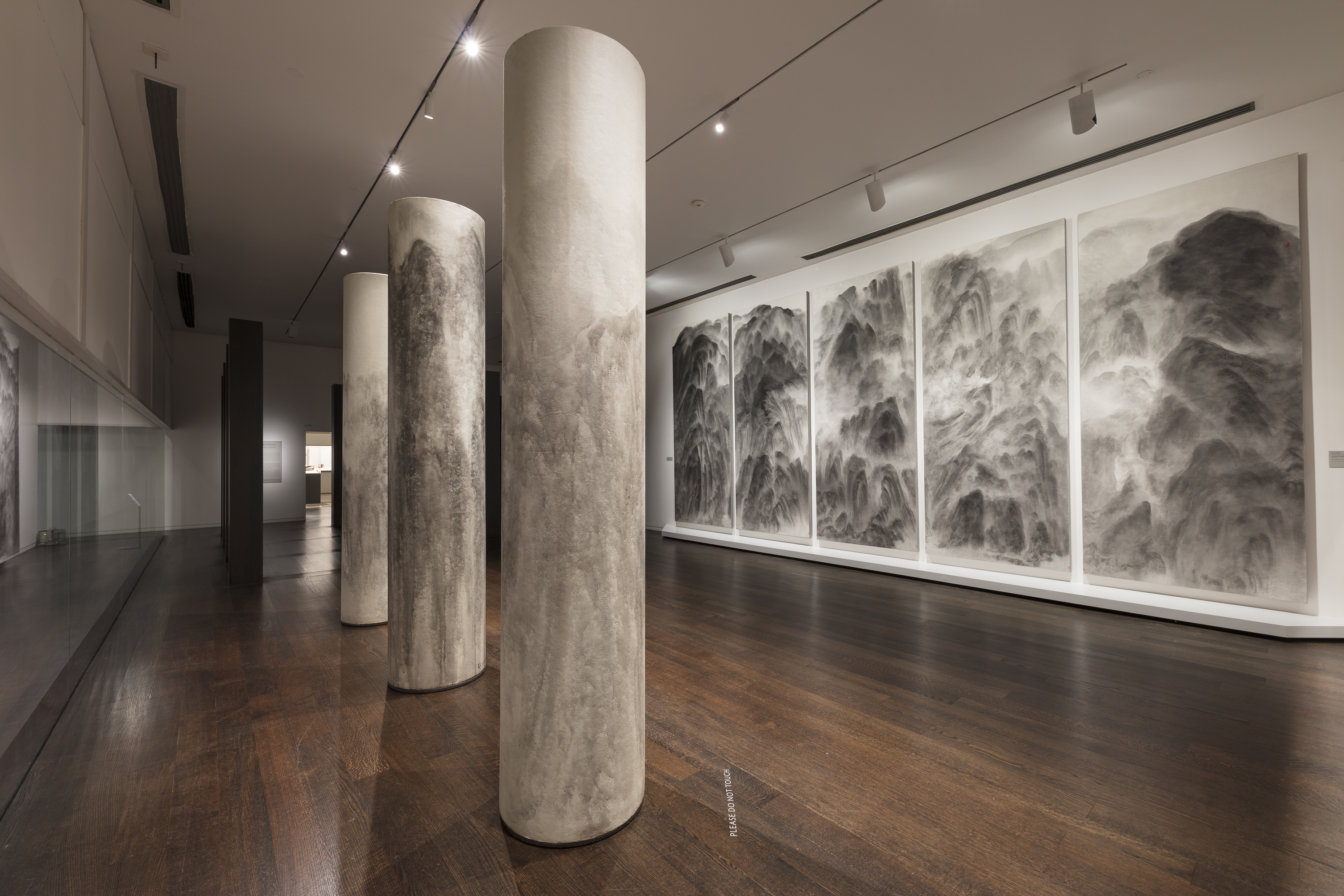 Xu Longsen is a Taoist painter, and this is the first instance, that I can recall, where the contemporary art of a major religion or historic spiritual practice has been presented by a major American art institution. It was sponsored, in part, by the museum’s chairman, Thomas J. Pritzker, who purchased “Yu Chu Kunlun,” the five-painting series that runs floor to ceiling on the south wall of the Ando gallery. Can you imagine any contemporary Christian or Hindu art being given museum gallery space at all? In traditional Chinese civilization, Taoist philosophy was balanced by Confucian and Buddhist traditions that were more about social responsibility and compassion. Those concerns, however, seem less congruent with contemporary art and the wealthy men who determine its value.

None of which diminishes the greatness of Xu Longsen’s achievement or the boldness of the Art Institute to present it. This kind of harmonious and inspirational painting is certainly foreign to the provocative practices of the contemporary art world based in New York. But as an emerging China continues to challenge America’s economic and geopolitical leadership, its indigenous visual language may become ever more important. (Chris Miller)

Xu Longsen’s “Light of Heaven” shows through June 24 at the Art Institute of Chicago, 111 South Michigan.