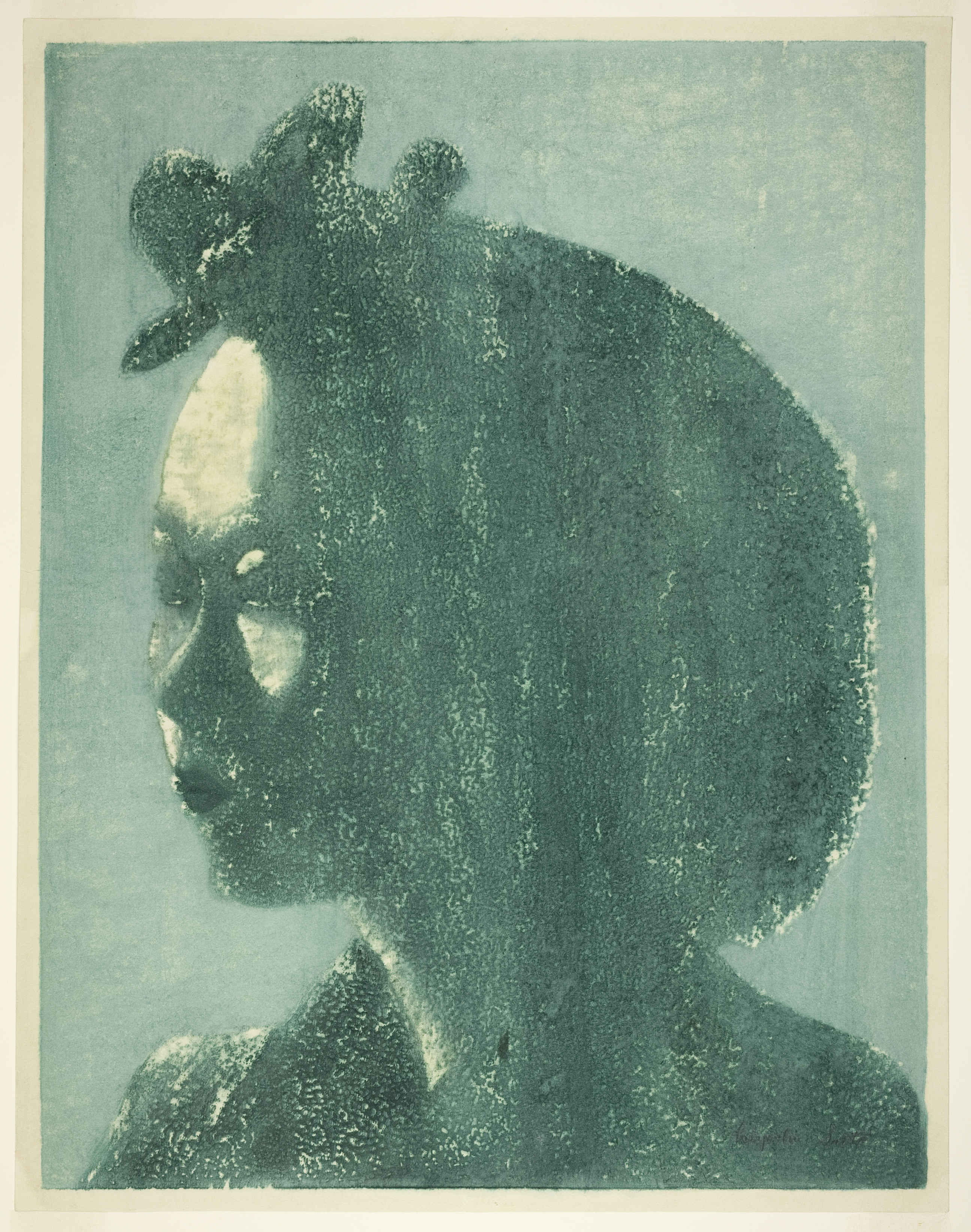 A portrait is generally understood to convey the likeness of the sitter, but the printed portraits in this exhibition, completed in 1940s and 1950s Japan, remind us that a portrait does not only represent the sitter’s state of mind but also that of the artist and the relationship between the two. While the four artists featured in the exhibition all belonged to Japan’s Creative Print Movement (sosaku hanga), each established his own idiosyncratic style.This was a natural outcome for a movement that strived to promote prints as a high-art medium, capable of communicating the artist’s creative self-expression. The movement’s longtime leader, Onchi Koshiro (1891-1955) demonstrates his proficiency in both realism and abstraction. His student, Sekino Jun’ichiro (1914-1988) sculpturally models his subjects by layering colors without any defining black outline. A portrait of a woman by Saito Kiyoshi (1907-1997) uses tones of green to impart a psychological depth to the sitter. The soft and grainy image of the woman results in an uncanny look, evocative of pictorial photography. Kitaoka Fumio (1918-2007), in contrast to his peers, did not use color but exploited the expressive potential of black and white to its fullest extent. His prints visualize his family’s difficult journey home from Japan’s former colonies immediately following Japan’s defeat in World War II.

The exhibition also offers a closer look at the process of woodblock printing with a remarkable set of eight prints showing proofs from the color blocks used in producing Onchi Koshiro’s “Portrait of the Poet Hagiwara Sakutaro, author of ‘Ice Island.’” The proofs reveal the multiplicity of blocks that ultimately combine to generate a haunting portrait of the despondent poet. Especially noteworthy is the proof showing the wrinkles on the poet’s skin—the angular yet organic dents and carves seem to echo cracked tree bark, embodying the very medium of the woodblock print. 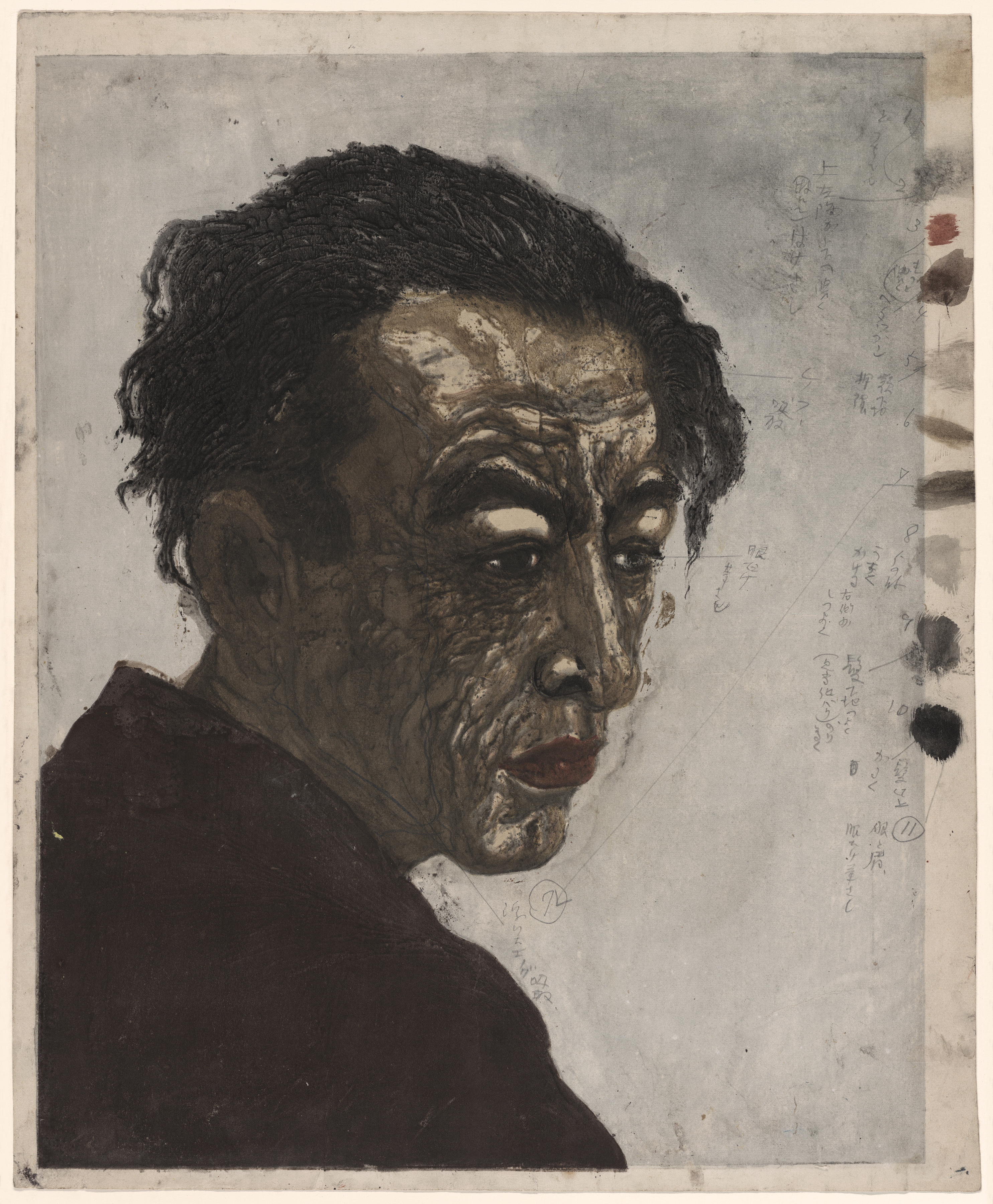 Assembled together, the portraits are also records of a social network. The subjects portrayed are poets, a violinist, a puppeteer and a kabuki actor, speaking to how the artists were embedded in the cultural circles of early postwar Japan. Artists also portrayed their family members, such as Sekino Jun’ichiro’s portrait of his son. Despite its intimate subject matter, the print gestures outward to Japan’s historical circumstances with a collage of Japanese-language and English-language newspapers in the background, a sign of the American occupation of Japan. Finally, the prints are also the direct and indirect products of Ichimoku-kai (First Thursday Society), a prints study group that gathered monthly at Onchi’s residence. Most illustrative in this regard is the portrait of Onchi Koshiro by Sekino Jun’ichiro, who has captured a rather private moment of his teacher inspecting his own prints. Their close relationship is also suitably reflected in the gallery. Their prints hang on opposite walls, facing each other as if ready to converse. (Sandy Lin)