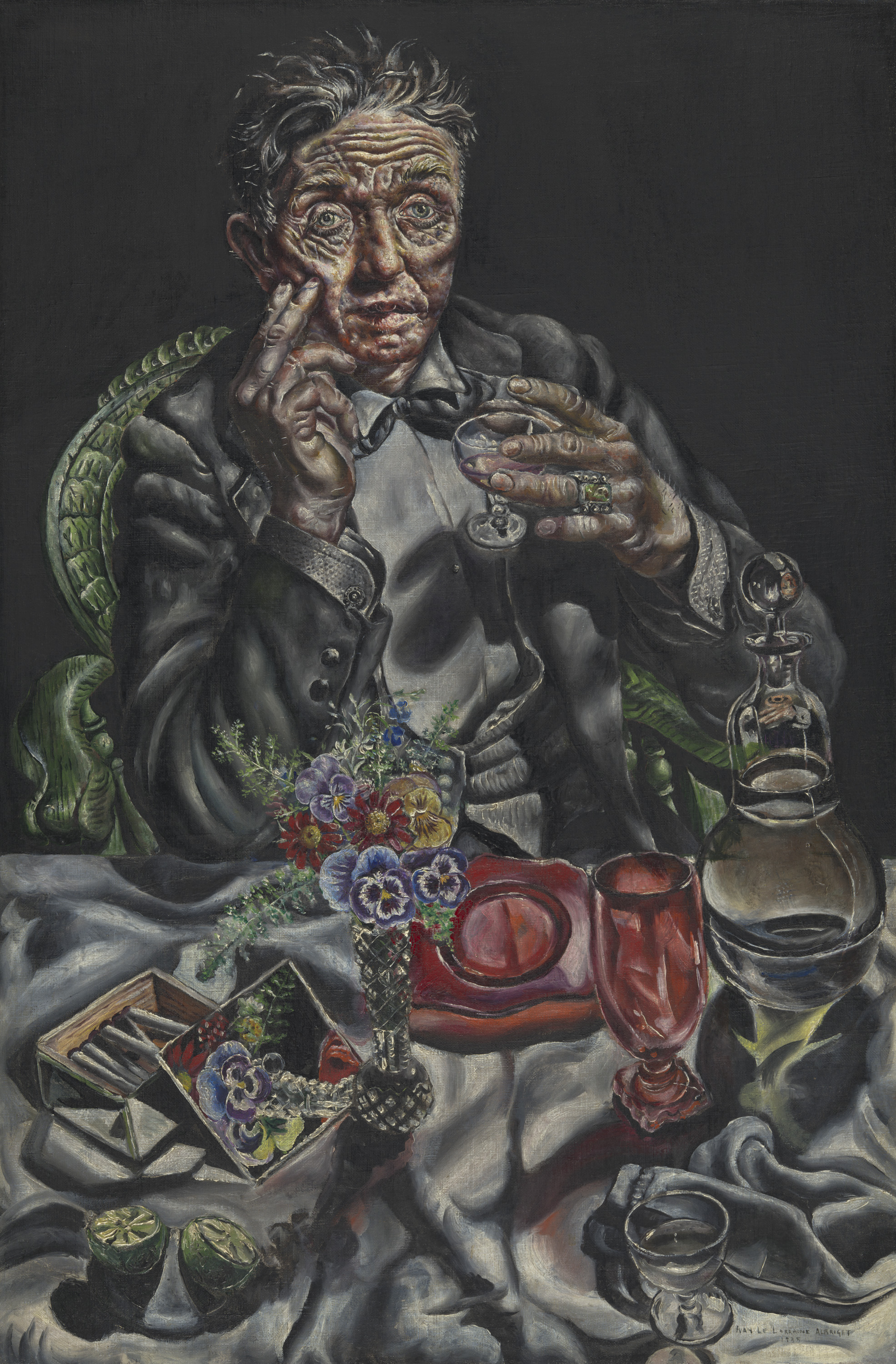 In 1955, the aesthetician Campbell Crockett reported that Norwegian audiences were bored by Jackson Pollock, impressed with Ben Shahn, and “horrified by and yet intrigued with [Ivan] Albright.” Commentators have tended to return to this double impulse, fascinated by the push and pull of his paintings. The seeming violence with which he treats his subjects has sometimes been understood to work like a car wreck, sucking viewers in and shutting down their critical faculties. When an issue of Art Education published a high-school lesson plan for teaching “Into the World There Came a Soul Called Ida,” one of the remarkable paintings selected for this show, the authors were criticized for not addressing the ways in which it “could easily be considered by some viewers as disturbingly destructive to women.” The plan recommended comparing the painting with a fashion model without, critics bemoaned, asking students to consider “the consequences and ethics of a male artist depicting a woman in such a trivial, shallow, and passive way.” 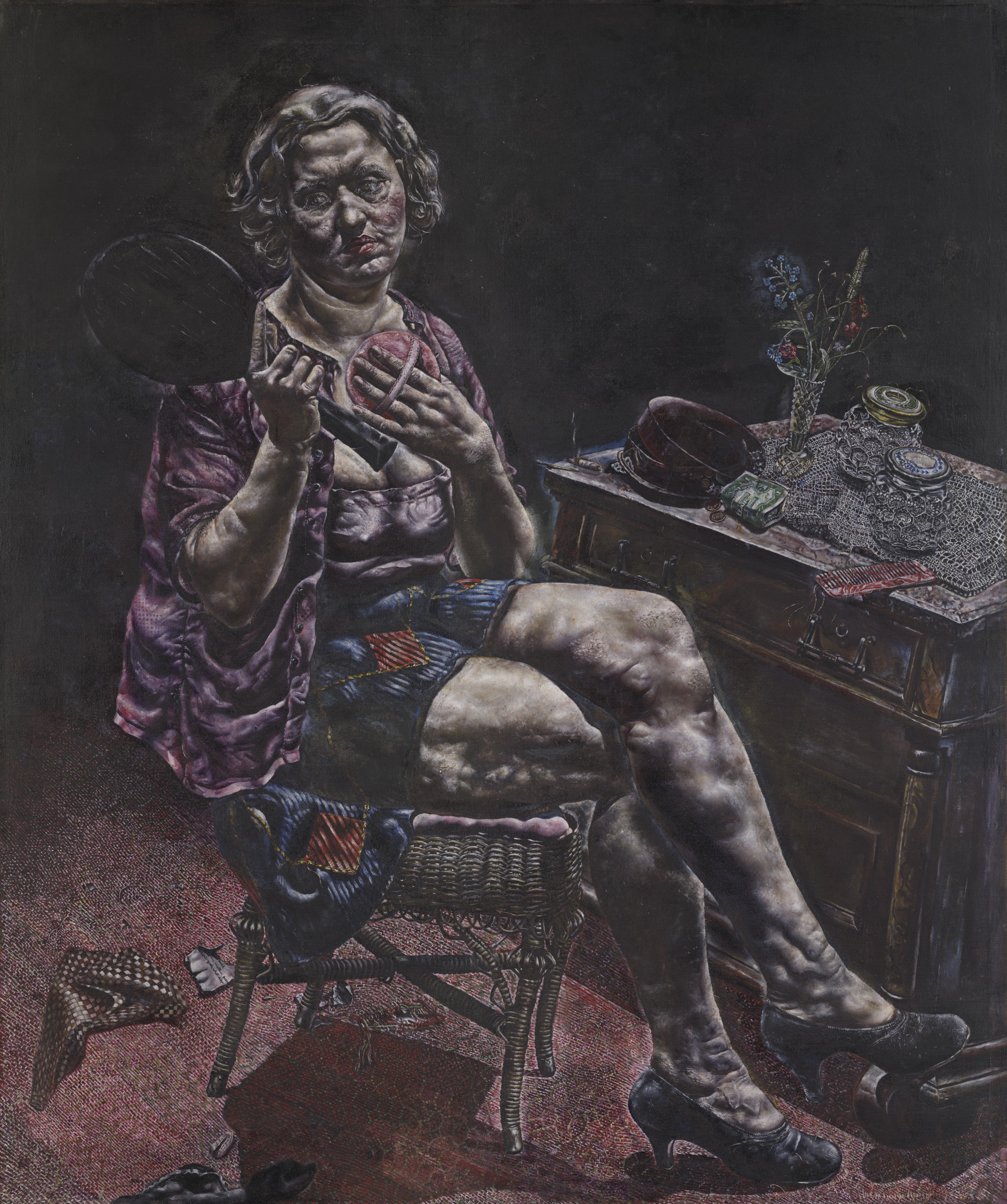 Ivan Albright, “Into the World There Came a Soul Called Ida” 1929–30 /The Art Institute of Chicago

“Flesh,” a judiciously chosen set of large paintings with a few works in other media, makes the case for Albright’s depictions as anything but trivial and shallow. And it provides ample opportunity to reflect on one of the more intriguing characteristics of his paintings, namely that the teeming rot and discoloration bedeviling his protagonists is rarely matched by frenetic activity on the surface of his canvases. They’re uncannily smooth, amplifying the strange sheen of his palette in which few blacks are true blacks and every tone seems a little jaundiced. These features tell of Albright’s masterful painterly control, and he puts them to good effect in pictures like “Ida” which conveys its vanitas theme as much through precisely rendered skin tones as the pustules on the central figure’s legs.

So what do we make of these claims to violence? The sculpted portrait of his father rings with oedipal overtones—gleefully rehearsed in the object’s tombstone—and suggests that, at the very least, Albright’s working mode was “disturbingly destructive” to men too. A series of self-portraits, continuing right up to the artist’s death and evidencing his diminished physical faculties toward the end, proves that he didn’t spare himself. Of course, it’s also true that Albright did seem to reserve his most sensitive, most obviously sympathetic work for men, with the virtuosic “Heavy the Oar to Him Who Is Tired, Heavy the Coat, Heavy the Sea” a good case in point. (I’m deliberately setting aside the unusually sedate portrait of Mary Leigh Block, which probably owes its quietude to the patron’s bent.) But something of Albright’s genius lies in the fact that he treats his subjects with tender, tragicomic care. It is not he, but we who supply the violence to figures like Ida or Dorian Gray, both of whom look more forlorn than anything. Albright reserves his worst for the restless, predatory world that swarms around and over them; assuming, of course, that we take busy swarms and grotesque iconography to signify violence a priori.

More could have been done, space permitting, to contextualize Albright’s means of production. An unfinished canvas drops tantalizing hints about the way he works and the museum has a large collection of his drawings, sketches and prints that could have fleshed this out. Although one sketchbook from his medical years was a welcome inclusion, Special Collections at the University of Chicago hold more. Finally, this is not a retrospective by any stretch, but some contrast with Albright’s earlier, less venomous works, plenty of which are held by the Art Institute, or with his landscapes, might have helped to point up the vigor of the works on display. But for a focused look at a Chicago master, this exhibition is a tour de force that whets my appetite for a true retrospective in years to come. (Luke A. Fidler)