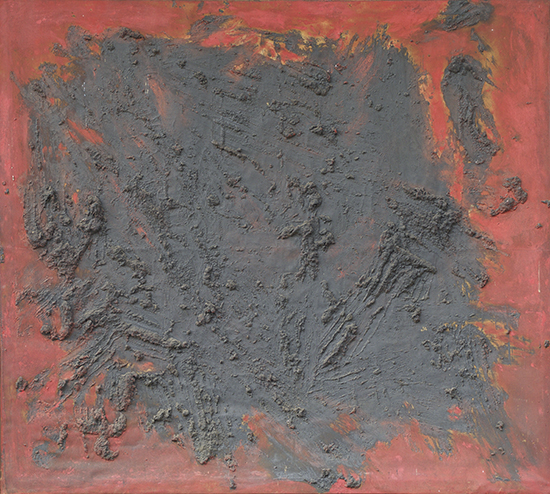 This body of work is sui generis, even if it resembles both contemporary Euro-American mark-making as well as traditional Chinese brush painting. An ethnic Chinese growing up in Bangkok, Thailand, Tang Chang (1934–1990) left school around the age of ten and worked at menial jobs. By his early twenties, he had taught himself how to paint portraits on the street and to read both Thai and Mandarin. He became involved in Taoism, translating an explanatory book and beginning a meditative practice that involved nonfigurative painting executed with his hands and arms.

Believing that his work was too personal to sell, every piece was left in his studio when he died. He had no such reservations about showing it in public spaces, however, including, remarkably enough, the American embassy in Bangkok. Under pressure from the Japanese army, the prime minister of Thailand aligned himself with the Axis powers during the Second World War. Fashioning himself a fascist dictator, he commissioned an Italian sculptor to glorify his regime as well as establish the first national art school. But as the Cold War heated up during the postwar era, American diplomacy would soon need more friendly states in Southeast Asia. A perceptive diplomat was probably all too happy to exhibit a renegade Thai artist whose work resembled that kind of American abstract painting whose apparent freedom exemplified an anti-communist ideology. 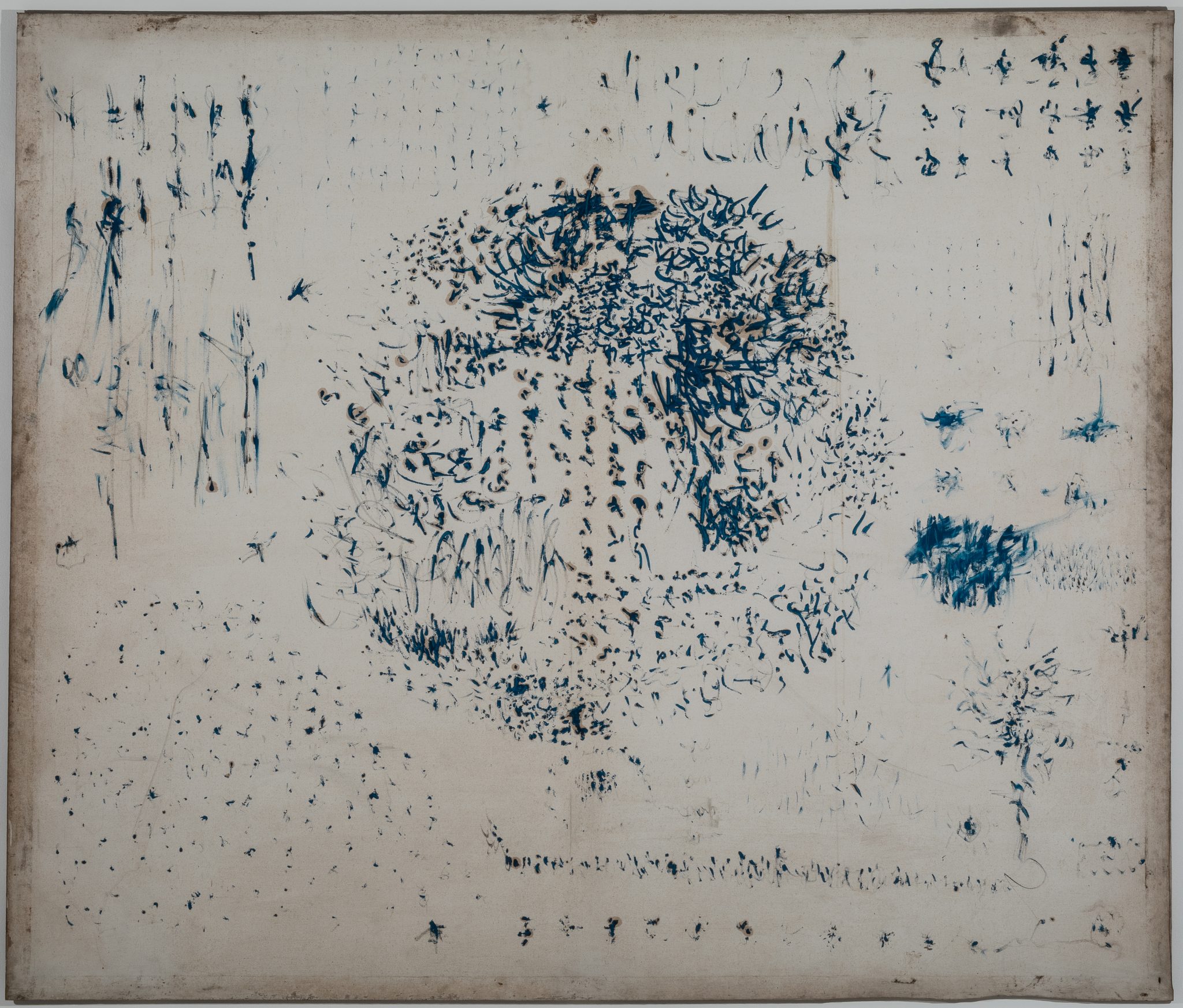 Tang Chang’s work is gestural, but even the large pieces are not especially heroic. Nor are they angry, frustrated, joyous, or very expressive of emotion at all. Their humanity runs deeper than personality—it’s all the way down to where the blood flows and the neurons fire. It’s just energy—and apparently, as a Taoist adept, Tang Chang was concentrating and then releasing it.

The most visually exciting pieces here are smaller ones executed with ink on paper. It’s remarkable that he did not use a brush—the designs are so crisp and dynamic. Often, they seem to represent a titanic struggle between two brutal and powerful adversaries. There is no sense of space as the surface is dominated by conflict. Gallery notes tell us that after a period of focused meditation, he might execute each one quickly as his children handed him one blank sheet of paper after another.

Luck has much to do with art that is quickly done. We can guess that for every brilliant ink drawing on display, there may have been a hundred that aren’t worth showing. It’s a much different challenge to maintain focus on a larger piece as it develops over days or weeks. Tang Chang’s larger pieces, done with oil paint on canvas, feel dismal and turgid, like soda that’s gone flat. 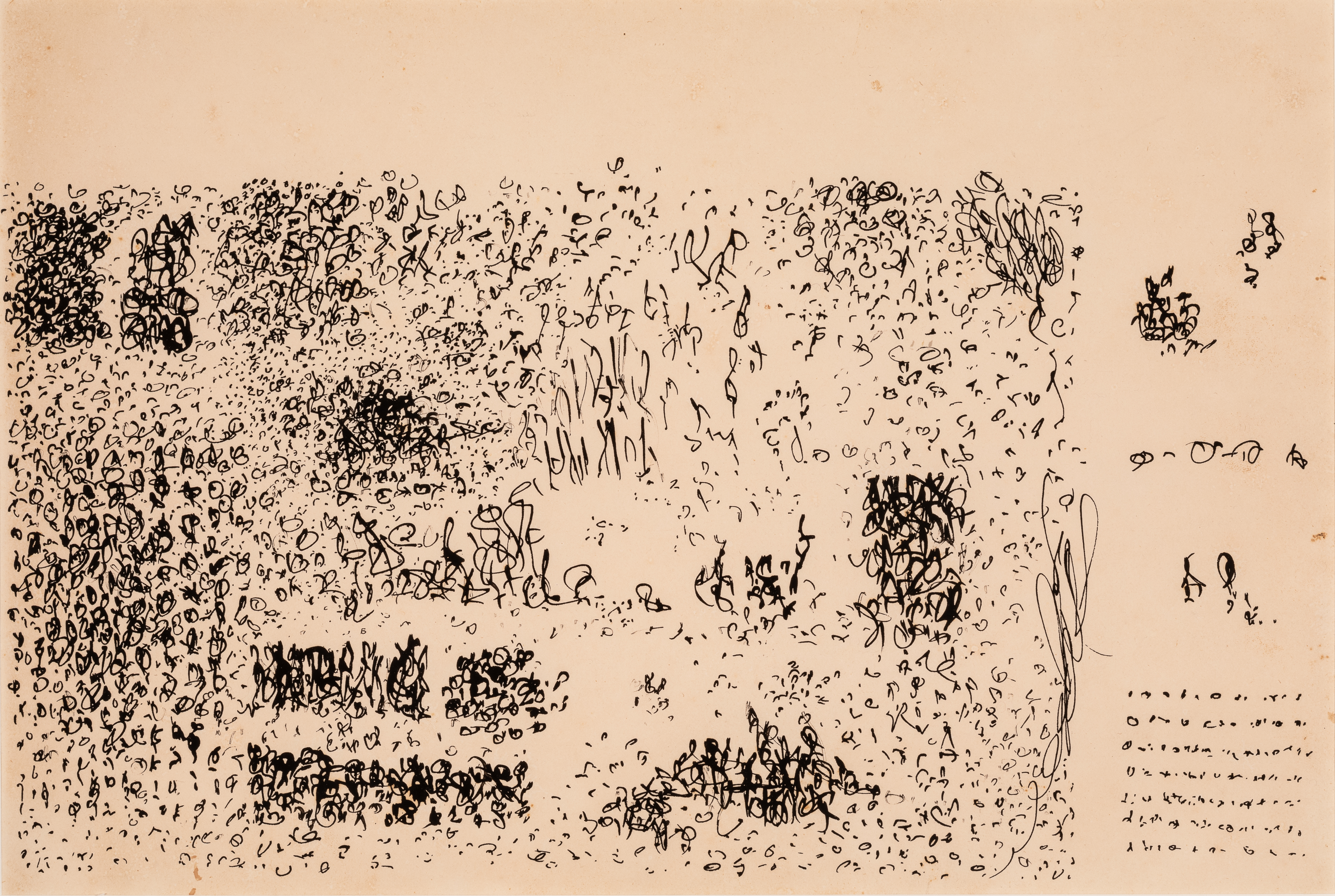 In the late 1960s, Tang Chang began to experiment with the visual expression of poetry. That’s probably why this, his first solo exhibition outside of Thailand, was brought to the University of Chicago. As the curator explains: “There’s this tension between the free-form, gestural energy of his paintings and the rigid, repetitive nature of his poetry that provides a really rich ground for this exhibition to explore….” One might note, however, that these two kinds of expression do not appear in the same pieces. Sometimes Tang Chang made expressive paintings, other times he created concrete poetry—which, by the way, can be quite pithy and fun in translation. Is there really any tension between those practices?

Online images of the leading Thai painters of his day are not very promising. Either they are blandly decorative or appear to add a superficial Thai flavor to what is essentially modern and post-modern Euro-American art. Sometimes, Tang Chang’s work can feel ugly, tedious or sloppy. But it always feels genuine—and sometimes it can also feel as strange, powerful and alive as a nest of angry ants. (Chris Miller)

Tang Chang’s “The Painting That Is Painted With Poetry Is Beautiful” shows through August 5 at the Smart Museum of Art, 5550 South Greenwood.