11
Judy Ledgerwood
Judy Ledgerwood has long been known for her bright and playful paintings that blend floral motifs with sloppy grids in a richly exuberant celebration of the color and tactility of paint. One is tempted to relate her joyful strokes to Chicago precursors in the Imagists, but Ledgerwood’s palette and mark-making are closer to AfriCOBRA’s Gerald Williams than the Hairy Who’s Jim Nutt. Her 2016 exhibition “Pussy Poppin’ Power” at New York’s Tracy Williams Gallery put feminist interpretations at the fore of her critical reception, but this year’s “Far From the Tree” exhibition that inaugurated Rhona Hoffman Gallery’s new West Town space took the vaginal discourse to new heights. A professor of art theory and practice at Northwestern University, Ledgerwood grounds an otherwise conceptual-heavy faculty in the studio tradition.

12
Nick Cave
Nick Cave has collaborated with architect Jeanne Gang and the Chicago Architecture Biennial on “Hear Hear,” worked with Bob Faust on a brilliant woven mural and danced through the historic Park Avenue Armory in New York City in just the past year. Known for his polychromatic soundsuits, he evolved with “Until,” a 22,000-square-foot kaleidoscopic installation, his largest piece to date, exploring racism through hanging metallic ornaments, chandeliers, blackface lawn jockeys, pony beads and other objects. The piece will travel from MASS MoCA to Sydney’s Carriageworks this fall. Cave successfully creates a world of grandeur that immerses the senses.

13
Jessica Stockholder
Jessica Stockholder creates work that defies categories, challenging distinctions among painting, sculpture and the art environment. In pieces that extend beyond the white cube and into public spaces, incorporating surrounding architecture in their composition, Stockholder asks viewers to make meaning from a variety of sources. The chair and professor of painting in the Department of Visual Arts at the University of Chicago will be on sabbatical in the 2018-19 academic year, but will be deeply immersed in her practice through a year-long residency in Berlin, as well as preparing for upcoming exhibitions at The Contemporary, Austin, and the Central Museum, Utrecht.

14
Hebru Brantley
Heavily influenced by the messages of community pride, uplift and accessibility embedded in the AfriCOBRA movement, Hebru Brantley combines the aesthetics of graffiti and the great twentieth-century muralists to explore themes of nostalgia, power, hope and the human psyche. Through colorful, accessible references to pop culture and politics, Brantley creates work that questions traditional views of heroism. Brantley maintains a robust practice, opening “Then There Were Two,” an exhibition at Galerie De Bains in Geneva in September, and in November the artist will host the Hebru Brand Studios x BAIT booth at the Complex Con before heading to a pop-up Brand Studios event during Art Basel Miami Beach in December.

15
Chris Ware
Known more these days for his New Yorker covers than Chicago-specific work, Chris Ware nonetheless has brought images of his Second City to the world through his timely and insightful comics for over three decades. Last year, Ware released his memoir-cum-graphic novel “Monograph,” a massive yet typically self-effacing treatment of his life and career to date. This year promises the collected strips featuring Rusty Brown, a recurring character Ware has drawn for seventeen years. These culminating projects notwithstanding, the artist seems poised for many more years of graphic storytelling. 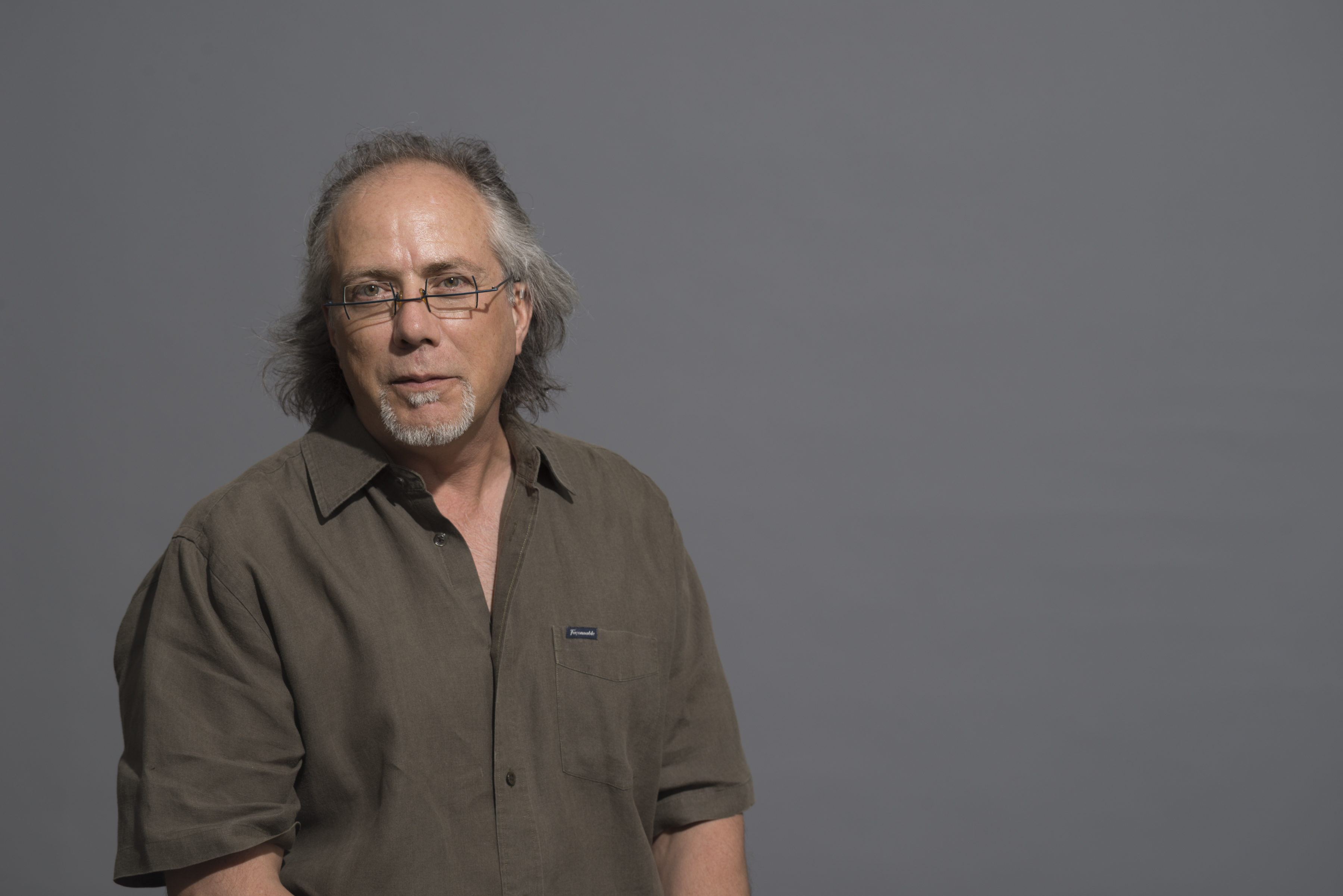 16
Iñigo Manglano-Ovalle
Born in Madrid and based in Chicago since the late 1980s, Iñigo Manglano-Ovalle has consistently produced work that raises essential political and social concerns in the seductive and sleek language of minimalism and in high-end design. A professor of art theory and practice at Northwestern University, his 2007 “Phantom Truck” imagined the mobile biological warfare labs described by former Secretary of State Colin Powell to justify the American invasion of Iraq, while his 2014 “Well” project for SITE Santa Fe installed a useable water pump that taps into the Santa Fe aquifer. This summer, Manglano-Ovalle unveiled “Untitled Film (Red)” at the Elmhurst Art Museum’s newly restored Mies van der Rohe-designed McCormick House, covering every inch of Mies’ massive windows with red film, radically altering the experience of the structure.

17
LaToya Ruby Frazier
Since she took her first shot, as a teenager, of her mother, LaToya Ruby Frazier has remained committed to capturing the lives of working-class black people struggling to thrive in dignity despite the disinvestment and environmental toxicity ravaging Braddock, Pennsylvania, the once-booming steel town where Frazier grew up. Her photographs, remixing the aesthetics of Dorothea Lange and Walker Evans with the social visual commentary of Gordon Parks, reveal the injustices as well as the humanity inherent in the human condition. As associate professor of photography at the School of the Art Institute of Chicago, Frazier maintains a robust practice spanning performance, video and multimedia, with upcoming exhibitions at her gallery, Gavin Brown’s Enterprise in New York City, as well as promoting the recent paperback edition of her first publication “The Notion of Family.” 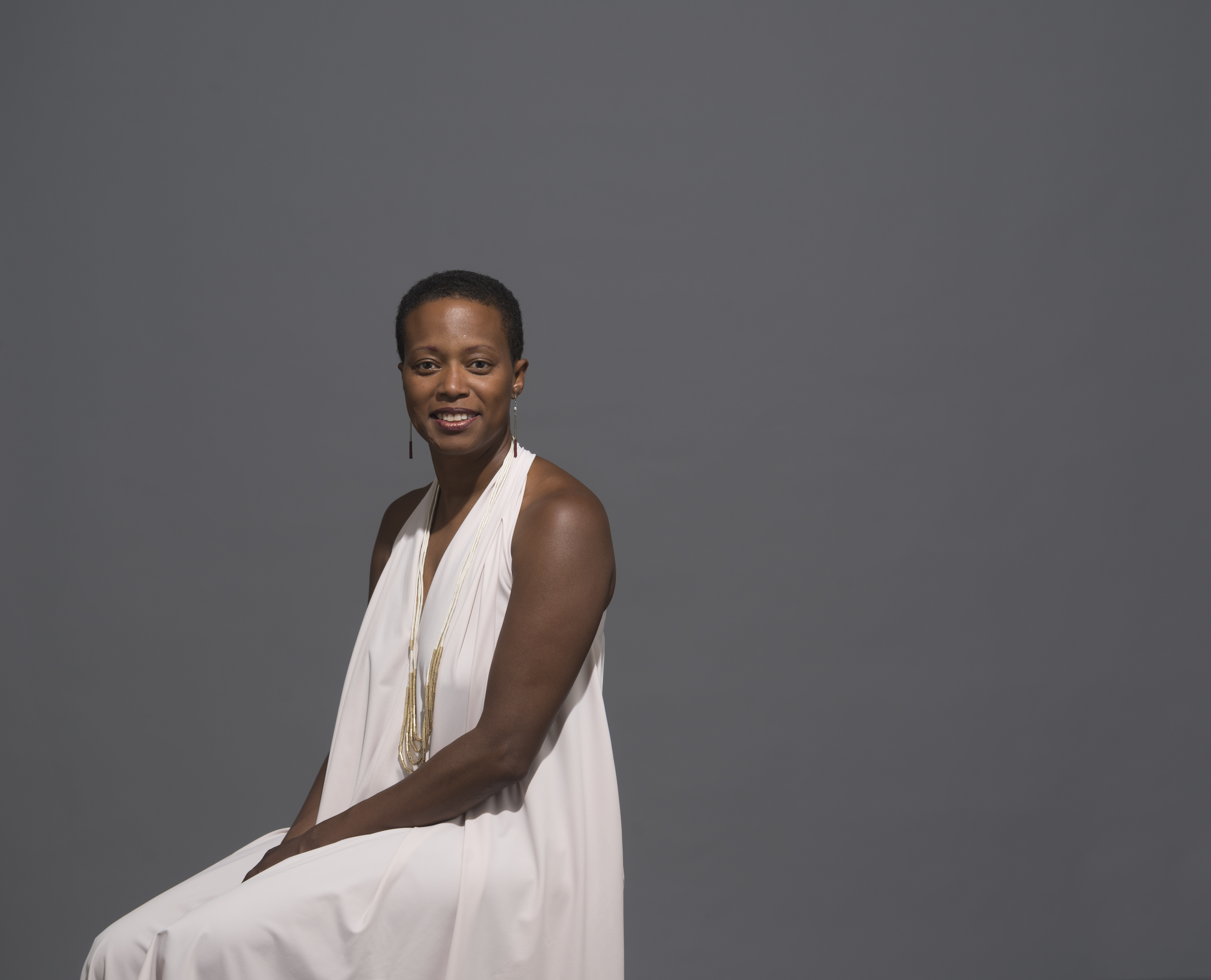 18
Amanda Williams
From Venice to the pages of T magazine to the forthcoming Obama library, Amanda Williams is rightfully everywhere—what better for the artist who brought Englewood to the MCA? Just as she used the colors of commerce and consumption, the shades of cigarettes and snack foods, to highlight the slow erasure of Chicago’s neighborhoods, she harnessed the power of gold, and more importantly, space—creating a room we can never enter, created by people for whom the museum was not made—to force observers to engage with the institution and the city on the level of urban systems. Her architect’s eye and imagination work on levels beyond Chicago and even art—Williams’ true medium is society. 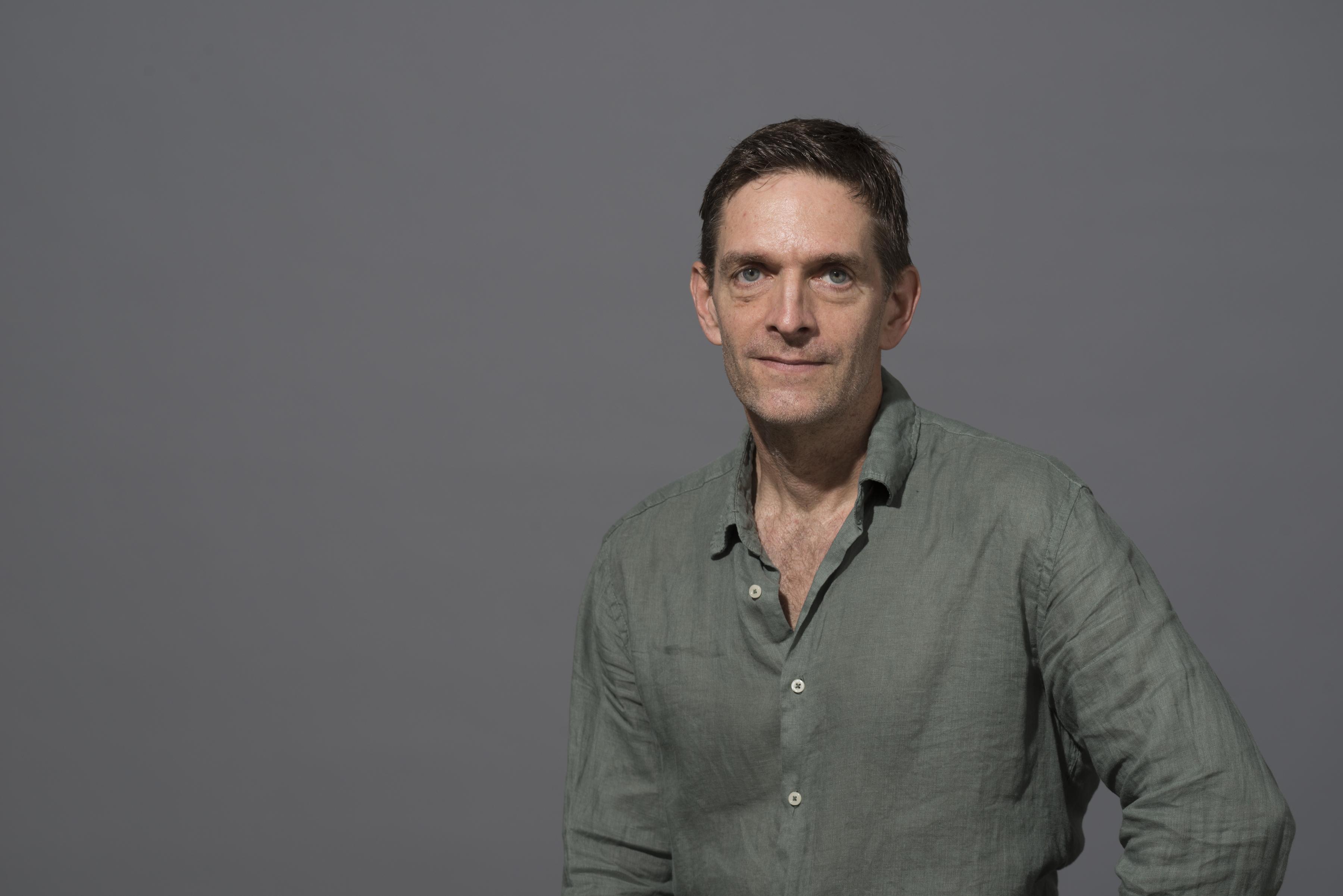 19
Dan Peterman
Decades before Theaster Gates moved to rebuild Chicago’s South Side, Dan Peterman was working at the intersection of infrastructure and ecology in the same neighborhood, operating an experimental studio and workshop inside a former recycling center at the corner of 61st and Blackstone. Called “Experimental Station,” Peterman’s complex includes the Blackstone Bicycle Works, a youth-supported community bike shop; the 61st Street Farmers Market, communal spaces and a gallery. In his studio practice, Peterman transforms everyday and disused materials—plastic, wood, aluminum—into sculptural and functional objects. Last year, he participated in documenta 14 with a copper and iron ingot-casting project shown in Kassel and Athens. His “Accessories to an Event (plaza),” acquired by the MCA Chicago in 1998, is back on display outside the museum’s newly renovated restaurant Marisol—innocuous grey-green armatures made of recycled plastics that invite the unsuspecting pedestrian to experience the art of sitting. 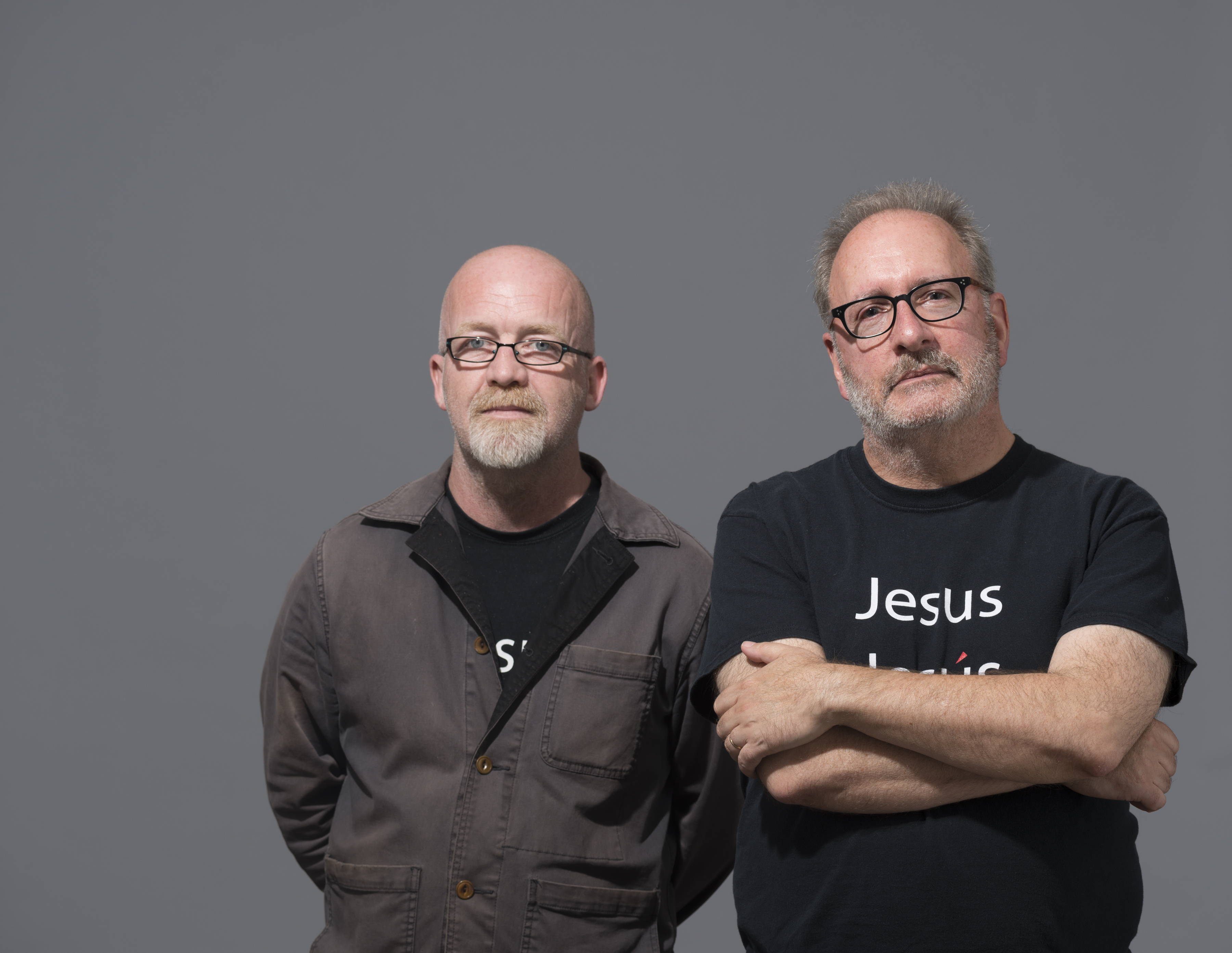 20
Industry of the Ordinary
One of Chicago’s most well-known performance collaboratives to art world insiders, Industry of the Ordinary generously stages many of their thoughtful artworks in public space for all Chicagoans to see. Their projects offer a more ambiguous approach to the weight of American politics, yet nonetheless manage to deeply pierce viewers who encounter them. The duo, consisting of Adam Brooks and Mathew Wilson, have been working together since the early 1990s and continue their prolific and influential output in and beyond Chicago. In addition to a robust practice, both are longtime professors, with Brooks teaching at Columbia College and Wilson teaching at SAIC. Outside the university circuit, they collaboratively run a well-respected annual summer residency program to support artists working in performance, installation and other non-traditional media.