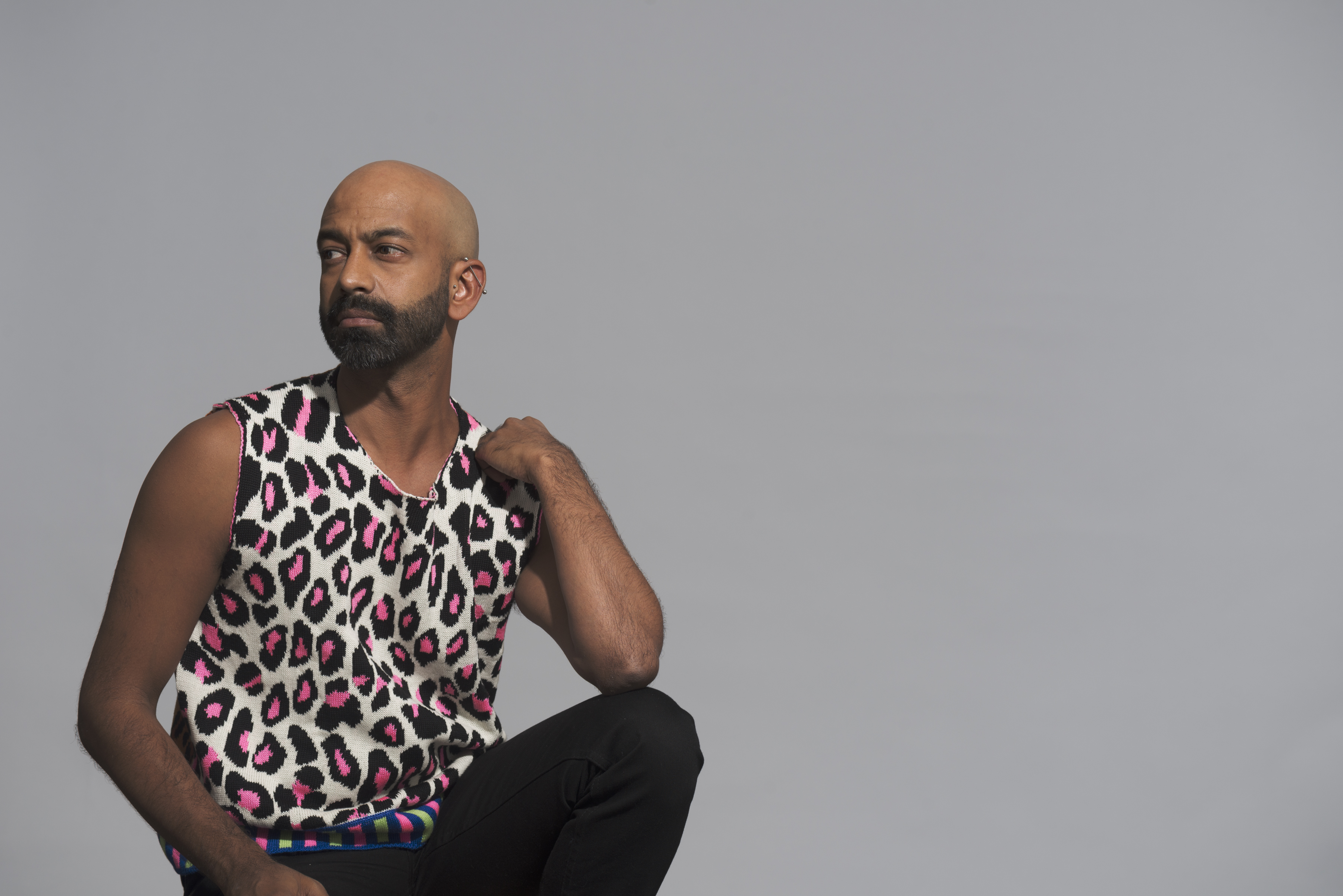 31
Brendan Fernandes
For Brendan Fernandes, movement is a metaphor for language. His performances and installations reveal the everyday human choreography, taking viewers and participants on a journey where identity is dynamic. The resulting work is akin to a collective blueprint for how we all might regain our agency and freedom. Since 2015, Fernandes has worked at a breakneck pace and shows no signs of slowing down. This August, he staged a performance on New York City’s High Line, and opens DePaul Art Museum’s fall exhibition season with a solo show in September. Recently announced as visiting faculty at the Banff Centre, Fernandes also has upcoming projects with the Noguchi Museum, residencies at his alma mater York University, a virtual reality commission at the Musée des beaux-arts de Montréal and solo exhibitions at Wesleyan University and the MCA Chicago.

32
Barbara Rossi
Barbara Rossi’s O.G. status dates back to her debut with the Imagists in a series of shows curated by Don Baum at the Hyde Park Art Center in the late sixties and early seventies. Although she was not among the Hairy Who proper, Rossi’s work nonetheless showed the characteristic, colorful irreverence that blossomed in Chicago then. Rossi got her due with a retrospective organized by the New Museum in 2015, which, happily, traveled to Chicago’s DePaul Art Museum, an unlikely but welcome collaboration. Earlier this year, Corbett vs. Dempsey wowed audiences with Rossi’s hauntingly beautiful black-and-white still lifes of wave-worn driftwood, poetically titled “Slippers”—a uniquely powerful project in the otherwise boisterous Imagist canon. 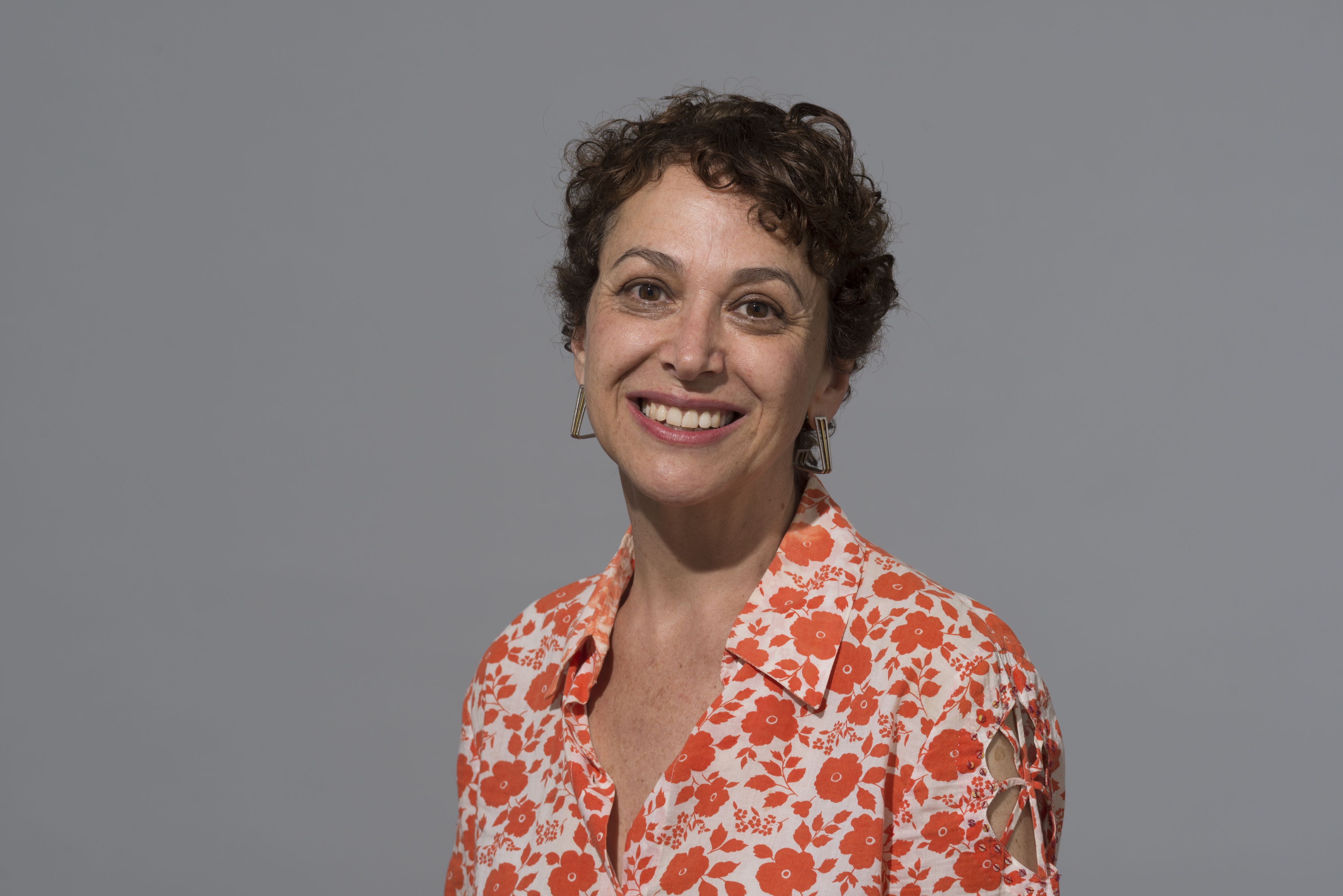 33
Dianna Frid
If the fiber arts have recently emerged as a formidable medium—Cecilia Vicuña’s presence in documenta 14 and her subsequent Neubauer Collegium exhibition this year come to mind—then Dianna Frid’s work is owed a debt due to the depth of the practice. She earned an Artadia award in 2004 for her work in text and textile, and the next year showed with Vicuña at the Poetry Foundation gallery. More recent significant awards include the Illinois Arts Council and major grants from the Canada Council for the Arts. The 2016 pairing of her work with peer Richard Rezac at the DePaul Art Museum proved both the elasticity of Frid’s expansive practice and the innovative curatorial approach of that institution. Nearly a decade of Frid’s most recent work received a stellar treatment at the University Galleries of Illinois State University. In 2017. Chicago’s young Goldfinch Gallery paired her this year with Monika Müller in a show that will travel to Switzerland. Frid is associate professor at the University of Illinois Chicago. 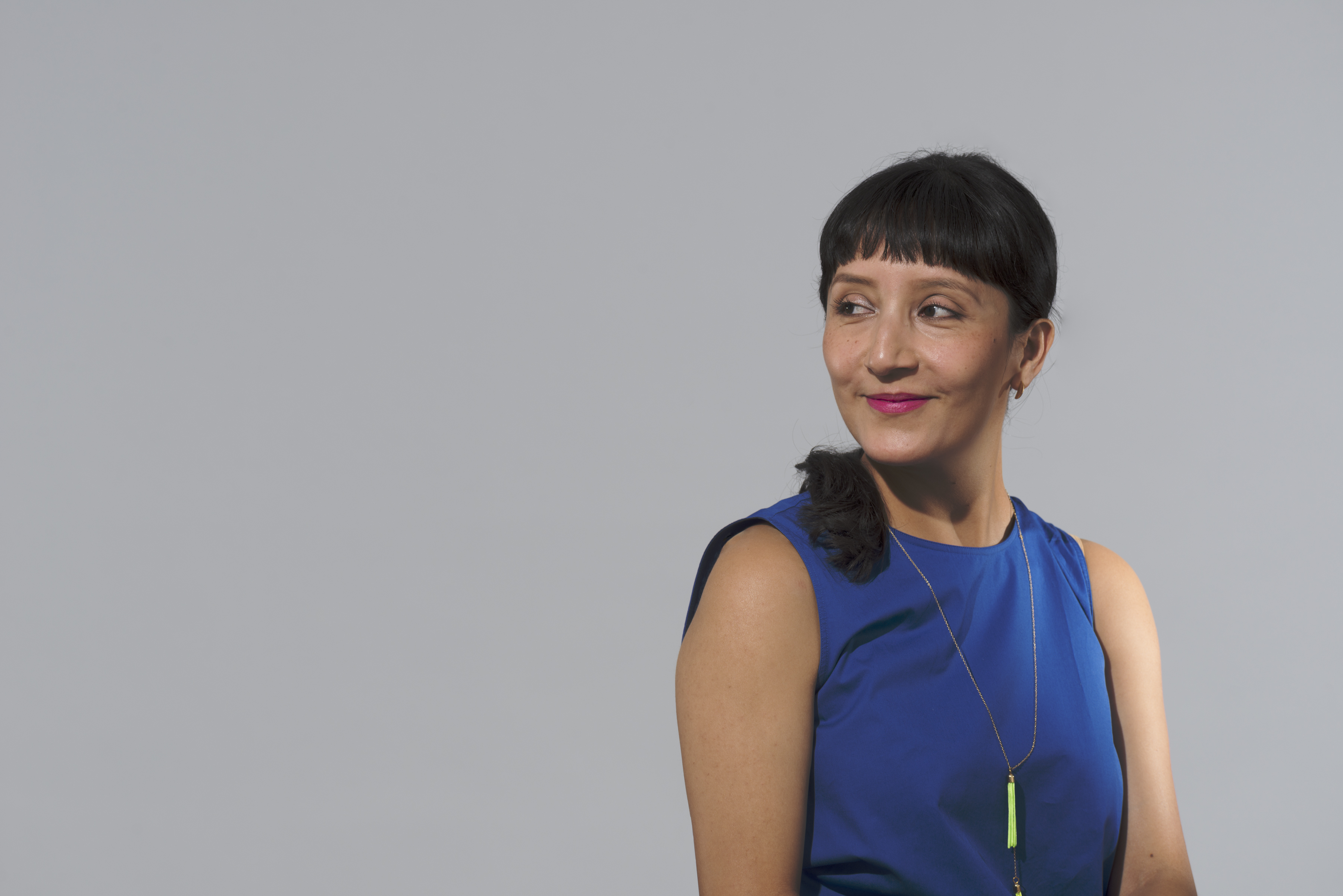 34
Maria Gaspar
Maria Gaspar believes art has the “potential for inducing liberatory acts,” which explains the impetus behind both her individual and collective art practice. The Chicago native recently received an Imagining Justice Arts grant from the Art for Justice Fund to develop a performance piece with detainees at Cook County Department of Corrections, a site of collaboration for the past six years. Gaspar has upcoming exhibitions in Houston, Texas; Kalamazoo, Michigan; and at the at the School of the Art Institute of Chicago, where she is an assistant professor. A piece from her ongoing “Disappearance Suit” series is on view at the Museum of Contemporary Art’s “A Body Measured Against the Earth.” The suit is handmade from dry grasses sourced from Sausalito, California, where Gaspar recently completed a residency. “The suit allows me to appear and disappear into the landscape as a kind of shapeshifter, negotiating the politics of the body with the politics of the landscape,” Gaspar says. As with much of her work, Gaspar is interested in investigating what it means for a person of color to inhabit an environment “in an especially surveillanced, militarized and oppressive moment in time.”

35
Jeanne Dunning
An expert image-maker, Jeanne Dunning is known for her photographic forays into the abject, bodily and grotesque. Her work tests the limits of ambiguity, seducing viewers as much as she pushes them away. A recent exhibition at Randy Alexander Gallery presented molding and rotting terrariums filled with aging fruit, a different type of beautiful repulsion exploring age and kinship—the sculptures were paired with sentimental landscape paintings by her mother, Mary Dunning. A longtime professor at Northwestern University’s Art, Theory and Practice department, Dunning has been included in major group exhibitions like the Whitney Biennial and Venice Biennale, and has had solo shows at the Hirshhorn Museum and Sculpture Garden in Washington D.C., the Museum of Contemporary Art in Chicago, the Malmö Konstmuseum in Sweden, the Berkeley Art Museum and the CCA Wattis Institute.

36
Richard Rezac
A master of form and composition, Richard Rezac’s sculptural installations confound distinctions between architecture, decorative arts, design and contemporary sculpture proper. And yet, his body of work evinces a consistent exploration of the possibilities and limits of the medium, as shown by his 2018 Renaissance Society exhibition, which selected floor, wall and even ceiling-hung works from the past twenty years of his practice. Also this year, his large, outdoor sculpture “Glen Elder,” a colorful, trussed scaffold, stood in the garden of the Arts Club of Chicago through the summer. The DePaul Art Museum paired him in 2016 with Dianna Frid in a thoughtful show of contrasts and coincidences. Over the years, Rezac has earned accolades from many groups, including the National Endowment for the Arts, the Joan Mitchell Foundation, the Guggenheim Foundation and the American Academy in Rome. 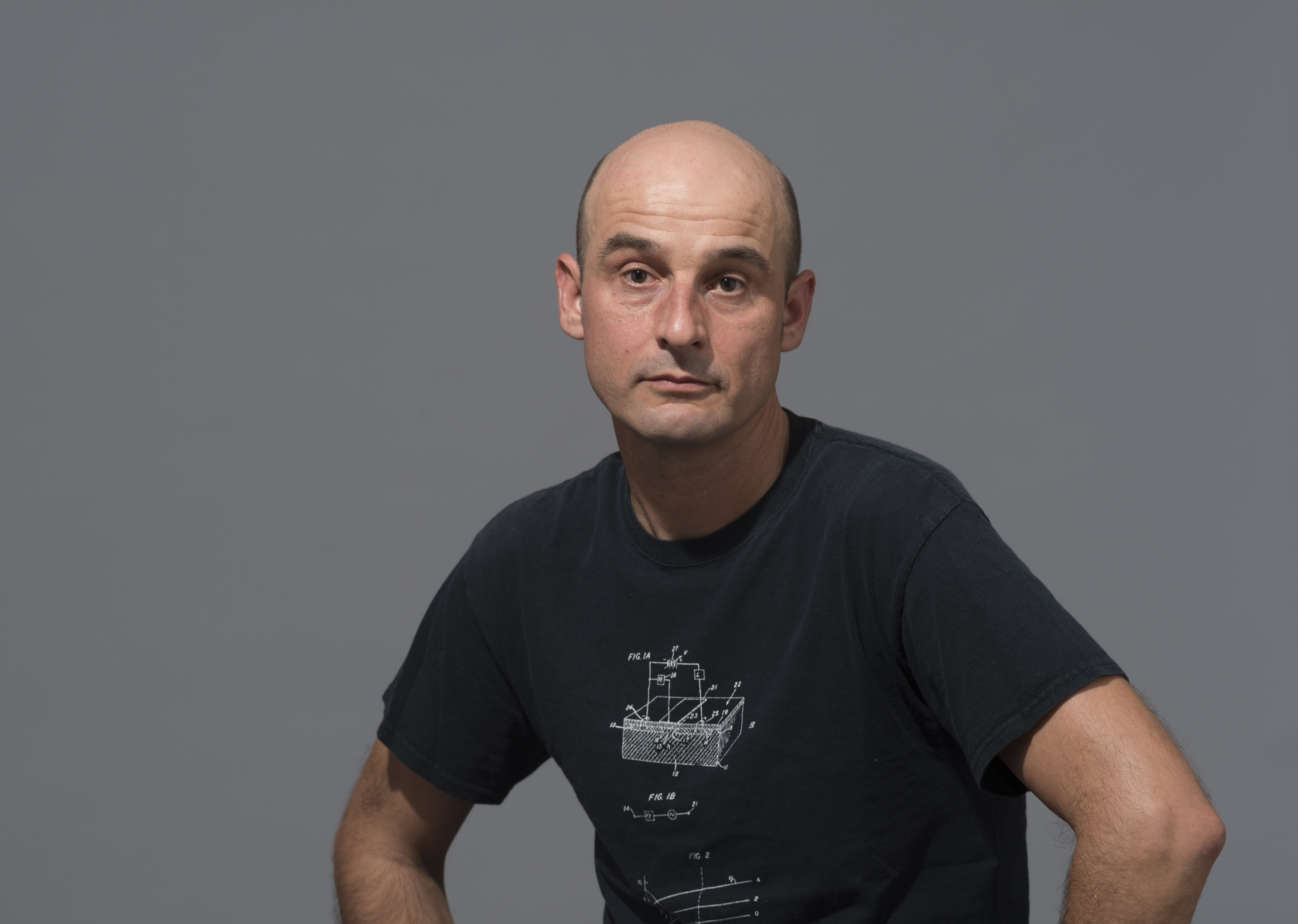 37
Jan Tichy
Photographer and filmmaker Jan Tichy has kept a remarkably low profile despite his impressive accomplishments since relocating to Chicago from Prague (by way of Tel Aviv) just over a decade ago. Now an associate professor of photography at the School of the Art Institute of Chicago, His work can be found in collections including MoMA, the Art Institute and the Tel Aviv Museum of Art. Last year, Tichy had solo shows at the MSU Broad, the Berman Museum of Art at Ursinus College, and at Drdova Gallery in Prague. Tichy is also known for his social practice public projects, such as his 2011 “Project Cabrini Green,” which illuminated the building before it was demolished; and his current, NEA-funded “Heat Light Water Project” in a former industrial building in Gary, Indiana. Tichy will return in September with another light and architecture work as one of the four artists selected for the monumental “Art on theMART” digital projection on the facade of the downtown Merchandise Mart.

38
William J. O’Brien
The creative prowess of William J. O’Brien cannot simply be contained in any one medium. Consider his ceramic and felt efforts, which twist these most traditional of forms into bulbous, loud, delightfully atavistic icons and totems which seem poised to vibrate apart in riotous defiance of their immobile position. They are almost always, as befits shackled chaos, left unnamed. O’Brien added to that prodigious output this year with a showing at Shane Campbell Gallery, where, surrounded by his typically nameless textiles and flanked by two nameless sentinels, the artist erected a circus tent, or “magic box,” adding space itself to his list of mastered mediums.

39
Lou Mallozzi
Lou Mallozzi was on residency in Vienna in 2015 when he became obsessed with groundbreaking archaeological discoveries in the region—the grave of the oldest known twin child burial and one of the oldest painted objects ever discovered, a piece of ivory marked with red ochre. Mallozzi visited the museums that displayed the artifacts, as well as the original dig site, even tracking down one of the archaeologists who had worked on it. This year, the work culminated in an installation at Sector 2337 inspired by his research. Mallozzi is assistant professor of sound at the School of the Art Institute of Chicago as well as co-founder and director emeritus of Experimental Sound Station, a recording studio, sound art gallery and archive located in Ravenswood. 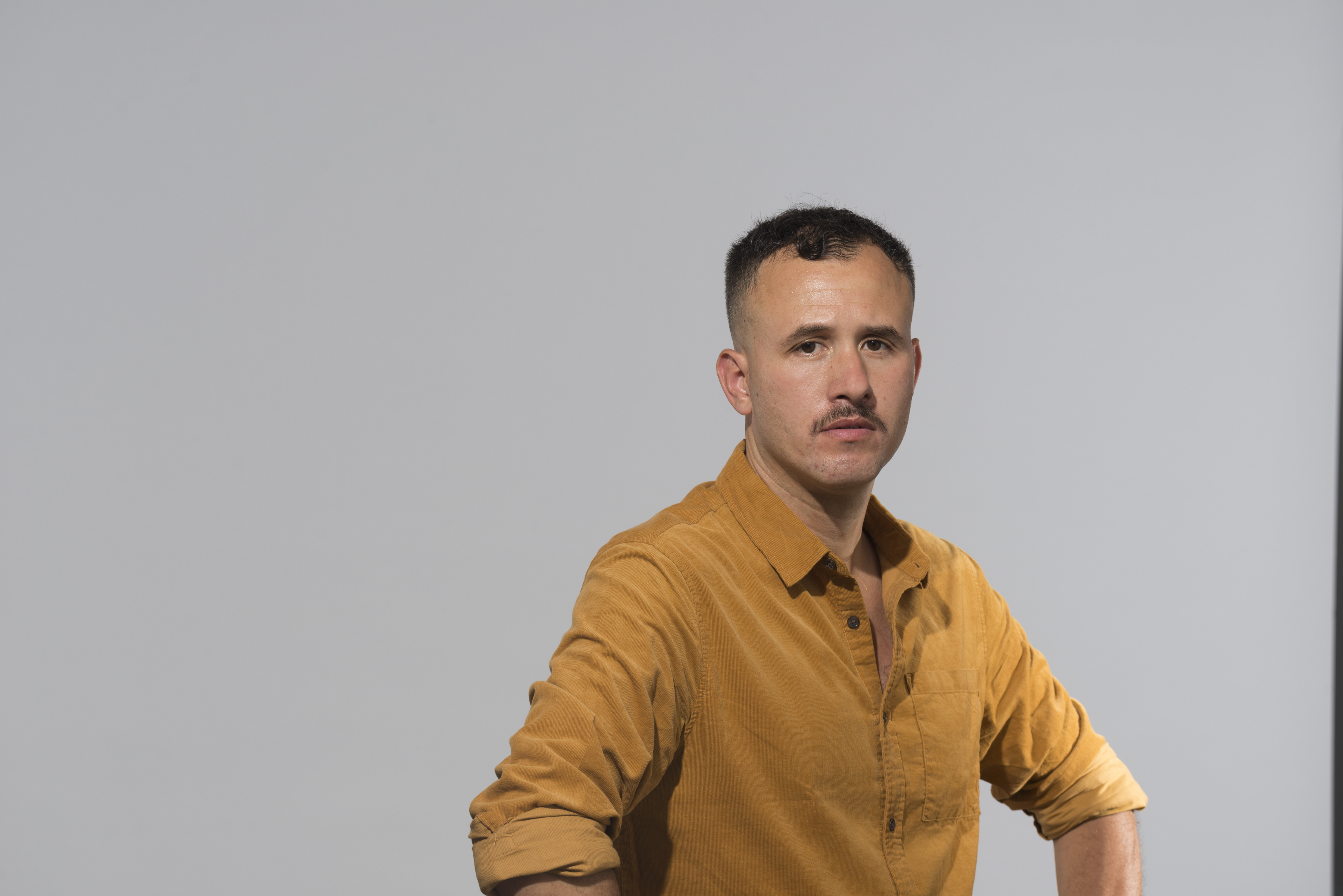 40
Alberto Aguilar
Alberto Aguilar gave his final lecture at Harold Washington College on April 17, where he taught for the past twelve years. Typical of Aguilar, the invitation to the lecture was itself a work of art. Framed as an open-ended poem, the invite read, “The final lecture will end with questions/The final lecture will end with uncertainty.” When asked what his future plans were, Aguilar replied that he’d be making art—and he is. He’s part of upcoming exhibitions at the Museum of Contemporary Art Detroit and at Centro de Desarrollo de las Artes Visuales in Havana. Along with his former student and frequent collaborator Alex Bradley Cohen, he is taking over Logan Square’s Comfort Station for the month of September to create a space for people “to slow their minds and bodies and enjoy art that comforts, holds and listens.” He is also working on an solo exhibition for Gallery 400, which will recount the sometimes collaborative, sometimes ephemeral work he’s made over the past fifteen years.