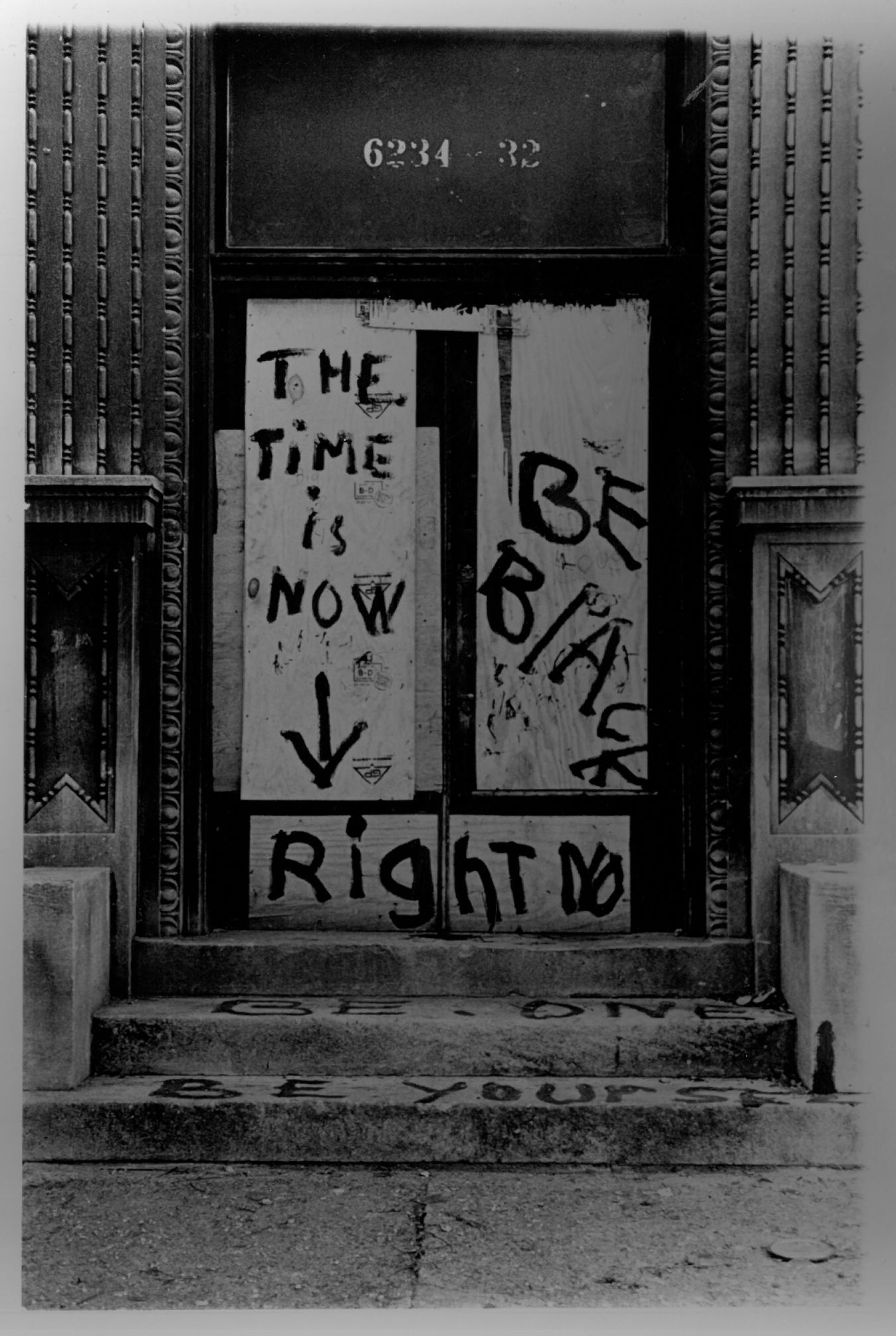 Until now, to think of art in Chicago during the 1960s and 1970s, its histories and legacies, one would look toward the Hairy Who. A group of artists that held a series of exhibitions at the Hyde Park Art Center, the Hairy Who is associated with Hyde Park and the South Side at large. A Chicago art history from that period tends to be seen through the lens of these artists and the larger Imagist group. Yet this period is also the time of the Black Power and Black Arts Movements. A closer look at activity on the South Side reveals an immense amount of energy invested creating and maintaining black arts institutions, alternative gallery spaces, artist studios and spaces for gathering and multidisciplinary collaboration. Although AfriCOBRA, a black artist collective started in Chicago in 1968 and dedicated to creating a unified, positive black aesthetic is fairly well-known, these artists and their works have risen in mainstream visibility. With their recent features in major exhibitions and museum acquisitions, AfriCOBRA achieved one of its aims: the inclusion of black artists into traditional art spaces.

One such exhibition was 2013’s multi-site show “AFRICOBRA in Chicago.” Rebecca Zorach, professor of art history at Northwestern University, curated one of the sites, “AFRICOBRA: Philosophy” at the Reva and David Logan Center for the Arts, to show how the group collaboratively developed their values. “There was this desire to give a real sense to the full breadth of art practice on the South Side,” Zorach says, “artists who were thinking of themselves as activist artists, artists who were experimenting in a lot of different stylistic approaches, people who were creating spaces for art to exist and thrive, people who were reimagining daily life.” Zorach’s newest exhibition “South Side Stories: The Time Is Now! Art Worlds of Chicago’s South Side, 1960-1980” at the Smart Museum of Art will add to and complicate art history’s understanding of the arts in the 1960s and 1970s in Chicago. Presented in partnership with the DuSable Museum of African American History and concurrently with their exhibition “South Side Stories: The Art and Influence of Dr. Margaret T. Burroughs,” these institutions aim to raise further awareness of how artists, and mainly artists of color, worked in the 1960s and 1970s. The partner exhibitions of “South Side Stories” brings to the fore their legacy that remains currently in Chicago, national and even international aesthetics and art practices.

“The Time is Now!” presents works by all of the AfriCOBRA artists. (The Hairy Who, too.) But Zorach and the show’s organizers wanted to broaden the focus, and include artists who were working on the South Side, those who were in dialogue with this arts community, but perhaps were not a part of these more visible groups or were political in other ways. Elliott Hunter’s lesser-known figurative painting, “Black Depression,” a work that charts a not uncommon internal conflict through thick gashes of paint, stands in proximity to Barbara Jones-Hogu’s “Rise and Take Control,” a graphic screen-print iconic to that era which gave a positive message of political action and direction. This contrast represents a thematic concern with internal and external conflict, as well as gesturing toward a need viewed by many within that arts community to respond to seemingly singular and negative feelings with positive and collective artistic action. 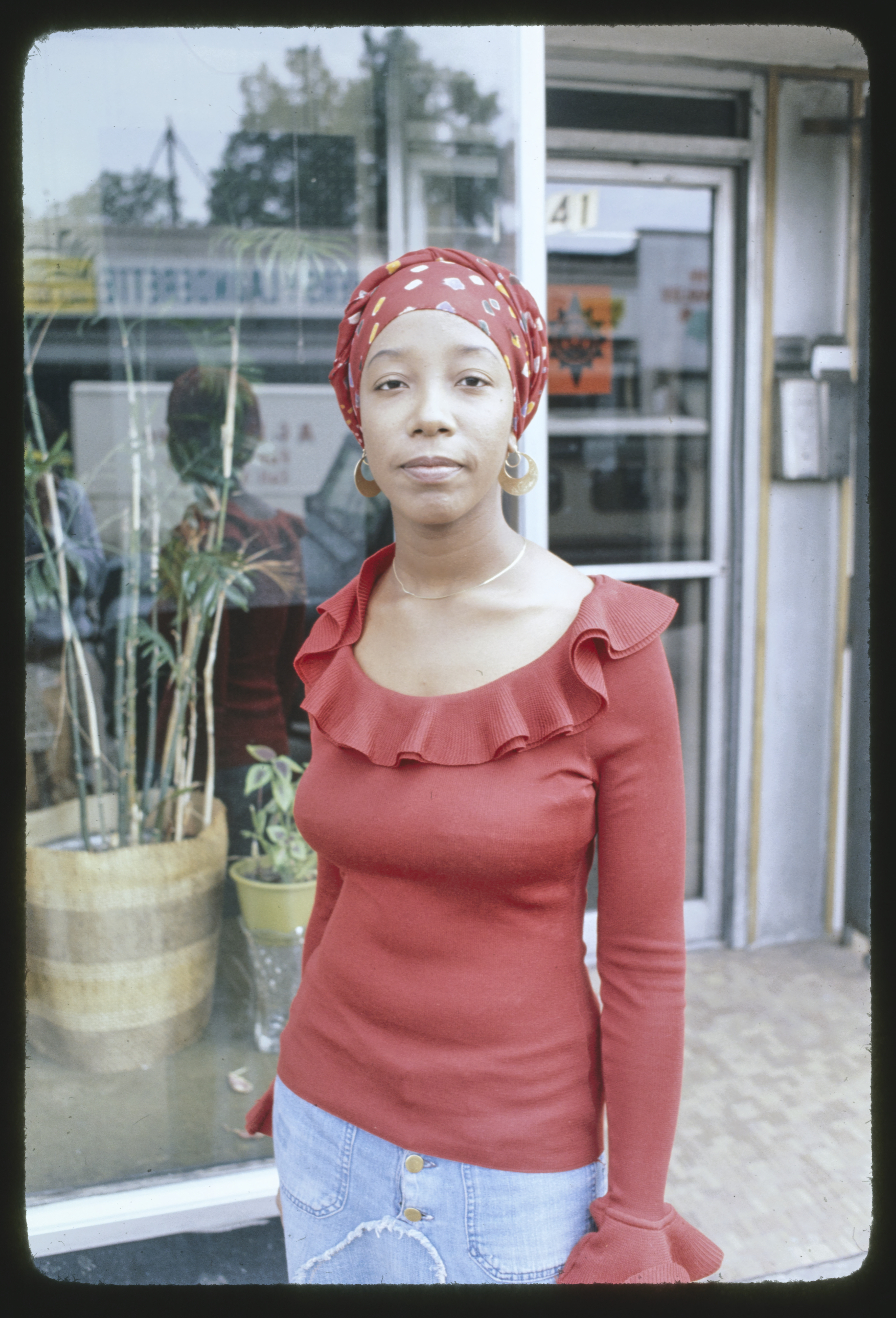 As much as the show is dedicated to the creative individuals who imagined worlds that were other than the time, space and history in which they lived, the show is also dedicated to another kind of art world: the exhibition spaces which hosted these works. In addition to sections focused on the Hyde Park Art Center and the South Side Community Art Center (SSCAC), with those relationships represented in exhibited works and ephemera, “The Time is Now!” also holds on view the alternative gallery, Osun, founded in 1968 by Dr. Yaoundé Olu in South Shore. The works of graphic artist Olu are presented alongside flyers not only for Olu’s exhibitions, such as “Black Art is Alive and Well” at the SSCAC, but also her community classes and gatherings, including a fashion auction and dance classes. A gallery on 75th Street, Osun was one of many along that avenue then. Outside of showcasing the works of African-American artists, artists and creatives in these neighborhoods founded galleries to encourage the community to organize and to strengthen the community with the presence of art.

The show not only features the works of artists and designers making on the South Side from the 1960s through the 1980s, but also presents their world-making, community bonds, and collective action. For Zorach, “Collectivity is form,” and this collectivity extended beyond built environments to include informal spaces in-between: alleys, streets, and the broadsides of buildings, which served as the homes for group mural projects. With these works on public view, residents of these neighborhoods became active participants in the making process. As artists created collaboratively and publicly, residents and artists engaged in spontaneous conversations. Everyday neighbors learned about art-making processes and were inspired to found other forms of cultural productivity and coalition. At the same time, these residents gave feedback and offered knowledge they had on the work’s content to the artists, to eventually become incorporated into the final project. Such a project was the Wall of Respect, conceived by the Organization of Black American Culture (OBAC). In response to a fractured black community, both locally and nationally, the artists of the OBAC conceived of the Wall of Respect to unite their neighborhood’s members through the depiction of black heroes. These artists affirmed a black identity and instilled pride in the community’s residents by creating a positive self-image. The mural is no longer, but “The Time is Now!” offers its visitors a historical remnant with Jeff Donaldson’s “Study for the Wall of Respect (Miles Davis),” which the muralists later incorporated into the work. 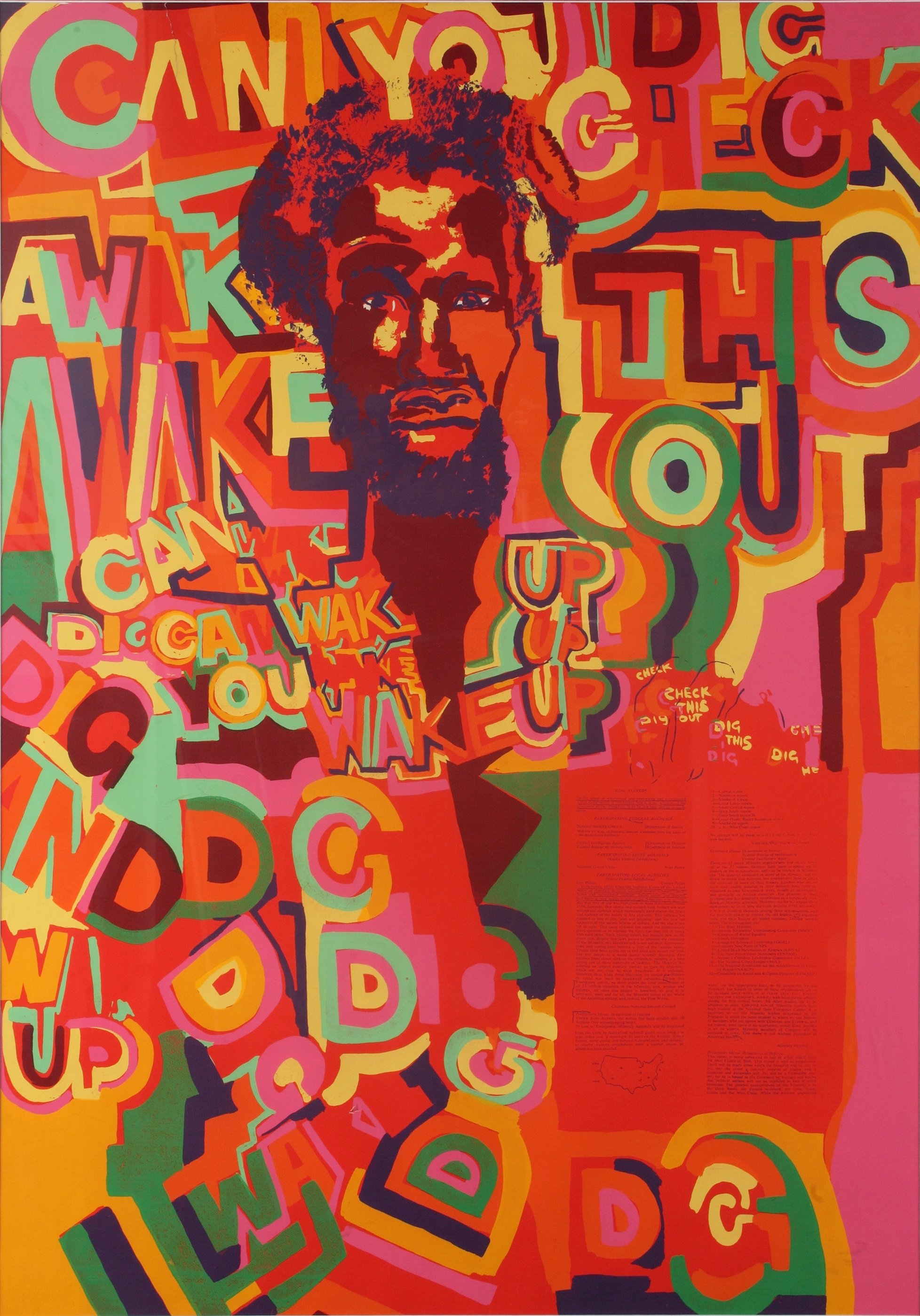 Gerald Williams, Published by AfriCOBRA, “Wake Up,” 1971, courtesy of the artist, on view at South Side Stories: The Time is Now! Art Worlds of Chicago’s South Side, 1960-1980

The works and the art spaces that these artists created were significant with regard to scale and new in terms of organization. As participatory projects they anticipated, and in some cases are directly linked to, many of the practices of later and current artists working in “social practice” and other modes of community organization, though their informal nature seems to be lost today. In that particular time and place, connections and conversations happened in ways that were unstructured, and the process of collaborative making resembled the improvisation of jazz. What does it mean to exhibit within a university institution the objects and works of artists who worked in impromptu ways with the aim to form and engage the community through aesthetics and methods independent of western values?

When planning “The Time is Now!,” its organizers wanted the exhibition to come alive, for audiences to experience the works in multi-sensory ways and to imagine the informal settings for gatherings which naturally took place in that period. As part of this effort, there will be a casual listening area where visitors can play historically relevant records curated by the graduates of the Sojourner Scholars, a summer arts and humanities institute for Chicago’s South Side high-school students. These students also included LPs of interviews about the Alley, a community space which hosted the Sunday Afternoon Jazz Set for over ten years in the 1960s and 1970s. Every Sunday afternoon, musicians and DJs gathered in an alley between St. Lawrence and Champlain Avenues where anyone was welcome to listen, dance and be with their neighbors. The positive energy and spirit experienced and generated by musicians and neighbors alike are documented by Kevin Harris with his black-and-white photographic series “The Alley,” also on view. 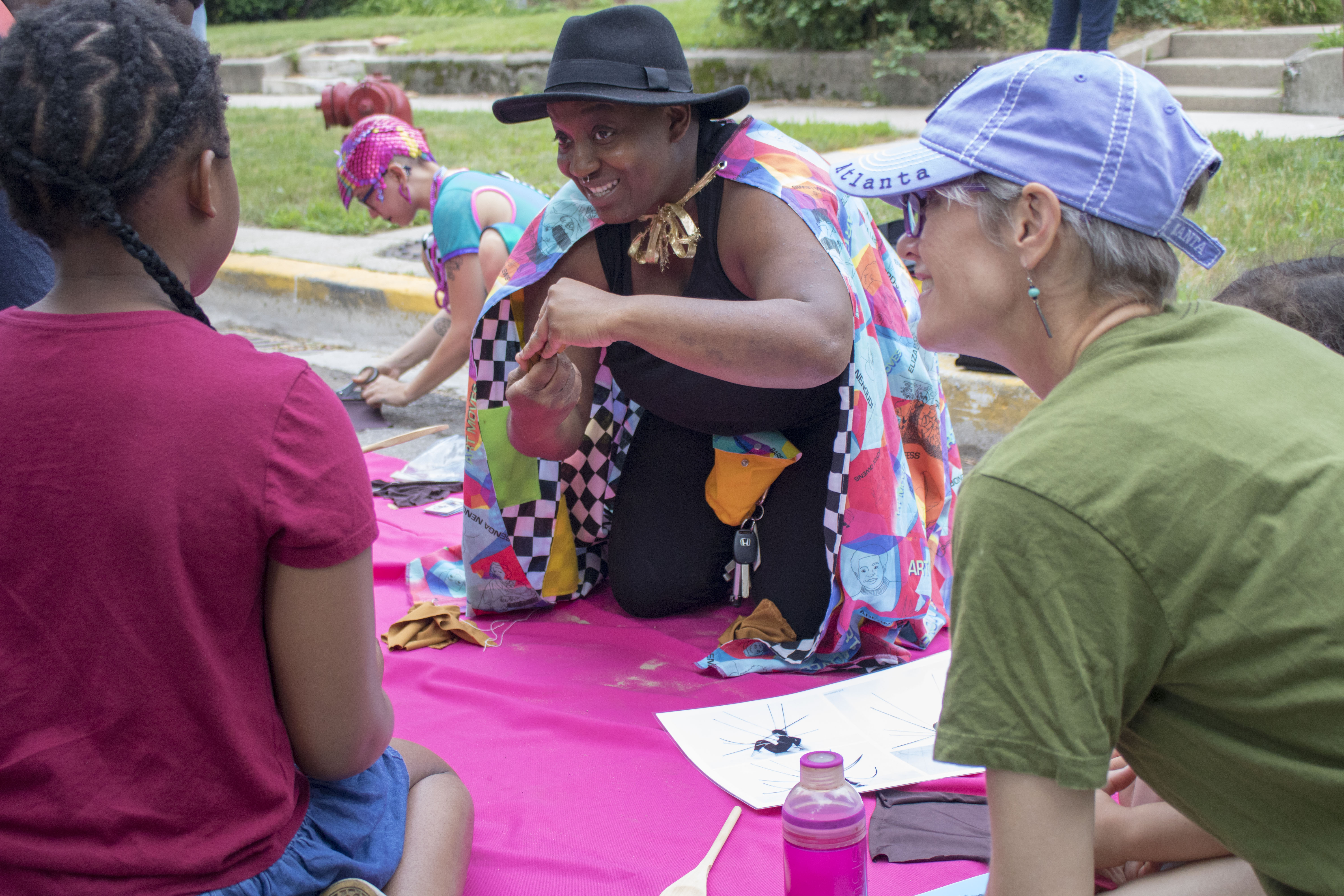 “Art Moves” educator Wisdom Baty shares the history and works of Senga Nengudi through conversation and art-making at Back Alley Jazz on July 14, 2018/Photo: Stephanie Koch

Among other curatorial efforts to revisit this era is the arts education program, “Art Moves: Chicago’s Innovative Structure of Address,” developed by the Museum of Vernacular Arts and Knowledge, or MOVAK. Directed by Romi Crawford, associate professor in visual and critical studies and liberal arts at the School of the Art Institute of Chicago, MOVAK is a museum without a physical space. Similar in aim to the Chicago collectives and organizations of the sixties and seventies, the museum develops and hosts projects that highlight those not supported by art museums and galleries because they do not fall within those spaces’ formal, aesthetic and institutional values. “Art Moves” is inspired by the grass-roots models for circulating information about black art on the South Side of Chicago such as the Wall of Respect. Meant to embody these informal and conversational methods, the “Art Moves” arts educators deliver curricula on the methods, works and histories of visual artists and designers such as fiber artist Robert Paige, Sylvia Abernathy (who was responsible for the layout of the Wall of Respect, a monumental mural painted on the side of a Bronzeville building that has returned to visibility in recent years), photographer Billy Abernathy, sculptor Edmonia Lewis and ceramicist Marva Lee Pitchford-Jolly.

Dressed to be highly visible in bright, rainbow-colored garments designed and fabricated by Sky Cubacub of Rebirth Garments, arts educators move through the streets and public spaces of their South Side neighborhoods. “Art Moves” encourage interactions that Crawford describes as on the “human-scale.” Recurring throughout the weekends of summer and early fall, the program is intended to engage curious passersby into one-on-one, spontaneous educational lessons on these lesser-known artists supported by small, take-away art projects. The educators employ conversational language to allow for access into the histories and ideas of artists that these community residents may not know influenced the cultural and architectural fabric of their own lives. More often than not, these small audiences learn something new, but every once in a while, the community residents share what history and knowledge they know about the artists and their neighborhoods, which the educators fold into their curricula and presentations, and continue to share.

“South Side Stories: The Time is Now! Art Worlds of Chicago’s South Side, 1960-1980” opens at the Smart Museum of Art on September 13. The Museum of Vernacular Arts and Knowledge’s “Art Moves” continues with programs throughout September and October. Both will be participating in Art Design Chicago’s “Celebrating South Side Stories,” an all-day arts festival, free and open to the public across various arts institutions on Chicago’s South Side, on September 15. Stephanie Koch is the managing director for the Museum of Vernacular Arts and Knowledge.