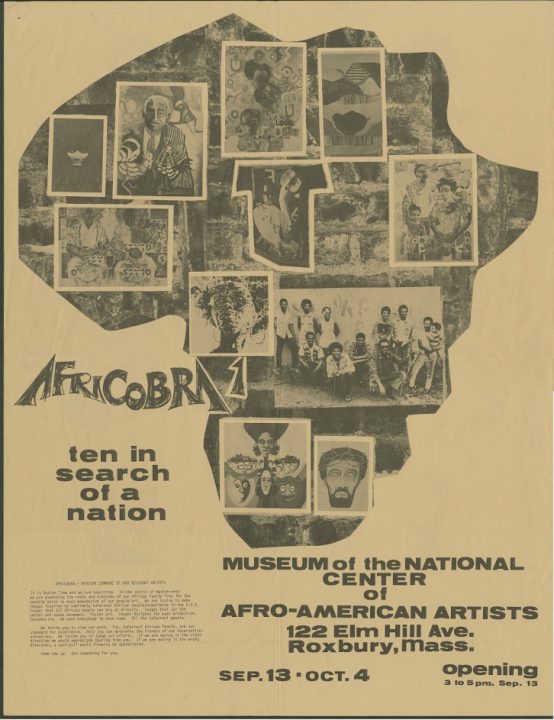 It was 1968 when a handful of artists working in a wide range of media—photography, painting, textile design, sculpture, printmaking and so on—were brought together by their shared identity and their love for their art, rich in cultural and political value. The African-American visual art group appreciated music and rhythm, bold color and style, and embraced a positive view of life that would grow to define their aesthetics and purpose: to elevate Black creativity. Looking back, Gerald Williams, Wadsworth Jarrell, Jae Jarrell, Carolyn Lawrence, Barbara Jones-Hogu and Jeff Donaldson never would have guessed that AfriCOBRA (African Commune of Bad Relevant Artists), a black artist collective that was founded on the South Side of Chicago, would have helped define the visual aesthetic of the Black Arts Movement of the 1960s and seventies, let alone celebrate its fiftieth anniversary this year.

In the light of the AfriCOBRA 50 retrospective exhibition at Kavi Gupta opening in late September, and at a time when culture, politics and identity are as relevant as ever, founding member Gerald Williams spoke with Newcity design editor Vasia Rigou about AfriCOBRA’s past, present and future, and the deep-rooted strength and beauty of black self-identity that defines the African-American community at large.

AfriCOBRA is one of the nation’s longest-running artist collectives. In what ways has it paved the way for contemporary creativity and why is it still important at this moment?

Generally speaking, the rise of AfriCOBRA is an example of the way in which fine arts grows organically. By virtue of the prodding, analyzing, critiquing of the status quo in long-held views of a Eurocentric approach to representing the world, we were able to step outside the box, so to speak, and build a framework into which others can reach for inspiration and tools to help them create. 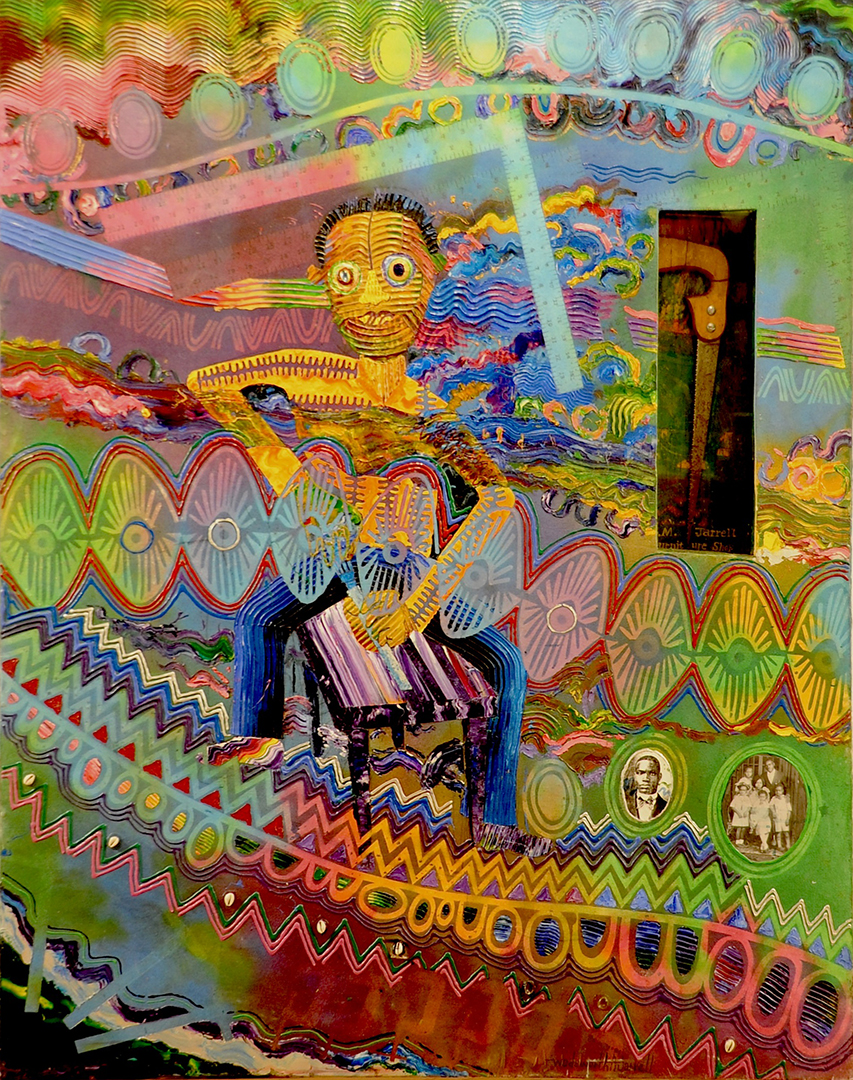 As the curator of the AfriCOBRA 50 exhibition at Kavi Gupta Gallery, could you talk about how you’re developing the show? What is the guiding idea and what are you hoping the viewers will take out of it?

The basic idea behind this exhibition is the origin and evolution of the work by the founding members who are still living. There is one guest artist who was there at the very beginning, Robert E. Paige, a textile designer; one artist who exhibited in the first major AfriCOBRA show at the Studio Museum—Sherman Beck; one artist who was a student of James Phillips at Howard University, Shahar Caren Weaver; and James Phillips, who joined AfriCOBRA in 1975 while still a member of [the] WEUSI [artist collective], and eventually had a strong impact on some others in the group with his artistic style; Calvin Jones, a painter with a strong background in naturalism or realism who infused his work with AfriCOBRA concepts; and Bernard Williams a painter-sculptor who worked on some of Calvin Jones’ murals, and has been instrumental in mural restorations around the city of Chicago. At heart is the idea that the AfriCOBRA is an open-ended creation and will continue to evolve.

Themes such as African heritage and solidarity, history and politics, family and gender roles, formed AfriCOBRA’s unique aesthetic philosophy and fifty years later they’re more relevant than ever. How has your work evolved around those themes and experiences?

Life’s lessons teach that everything is in a state of flux and change. One of the AfriCOBRA principles of design, along with unabashed use of color, lost and found line, frontality of the images, was “mimesis at midpoint,” which has been the least talked or written about. When one hears attempts to answer the question what that means, answers vary. I’ve been seeking ways to clarify that principle which I feel does not have to have the predictable subject matter based on political, social and biological references commonly associated with work by African-Americans. Early AfriCOBRA work reflected and helped to stretch the debate for unity, justice, equality and regeneration, but this is a new age calling for updated information. My work has tended toward personal introspection and a desire to express the contemporary ideals of wellness and fitness and meditation as essentials to quality of life. 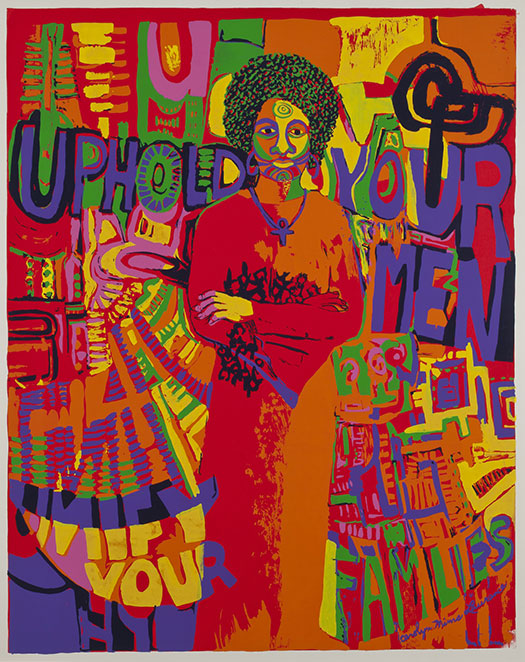 Chicago—one of the most diverse cities in the country—and particularly the South Side, has changed a lot in fifty years. How has our city and the South Side community informed your practice?

Between 1973 and 2015 I have lived outside of Chicago—in Washington D.C., South Korea, Japan, Italy, Portugal, Kenya and South Carolina—and I traveled in seventeen other countries. Returning to Chicago was not easy. So much has changed. The neighborhood that I grew up in has been devastated over the years and putting my head around how that had come about is depressing, and realizing that it should not have become that way is infuriating. Having traveled in both Japan and Germany, which were completely rebuilt within twenty-five years following their almost complete destruction during World War II, I found the neighborhood I grew up in still at war with itself after forty-five years of gang warfare and neglect only now beginning to show signs of recovery, but unfortunately, the same go-to guys that were on the scene during the demise of the community have their same fingerprints on the recovery.

The work of AfriCOBRA presents images of uplift and empowerment. Could you talk about the importance of positivity in your work?

At its inception, AfriCOBRA work was characterized by projecting positive imagery, people with heads held high, ideas of unity, reflection on the spirit of the time, identity, history, culture, et cetera. My work is leaning more toward introspection than nation building—I’m finding that picking up trash on the streets, exercising civic responsibility by addressing community maladies to authorities, helps to give meaning to my personal work. Positiveness is an important fuel to keep engaged.

From your experience as an educator, you always have to push your students out of their creative comfort zone. Looking back, what boundaries do you feel you’ve been pushing through your work?

Most of my working experience has been as an administrator-manager-facilitator—working with students, employees, anyone. I retired after twenty-two years working in arts and crafts centers for the military and their families. Working to provide them with opportunities to pursue their interests in learning and developing skills in all of the visual arts was at the heart of my job.