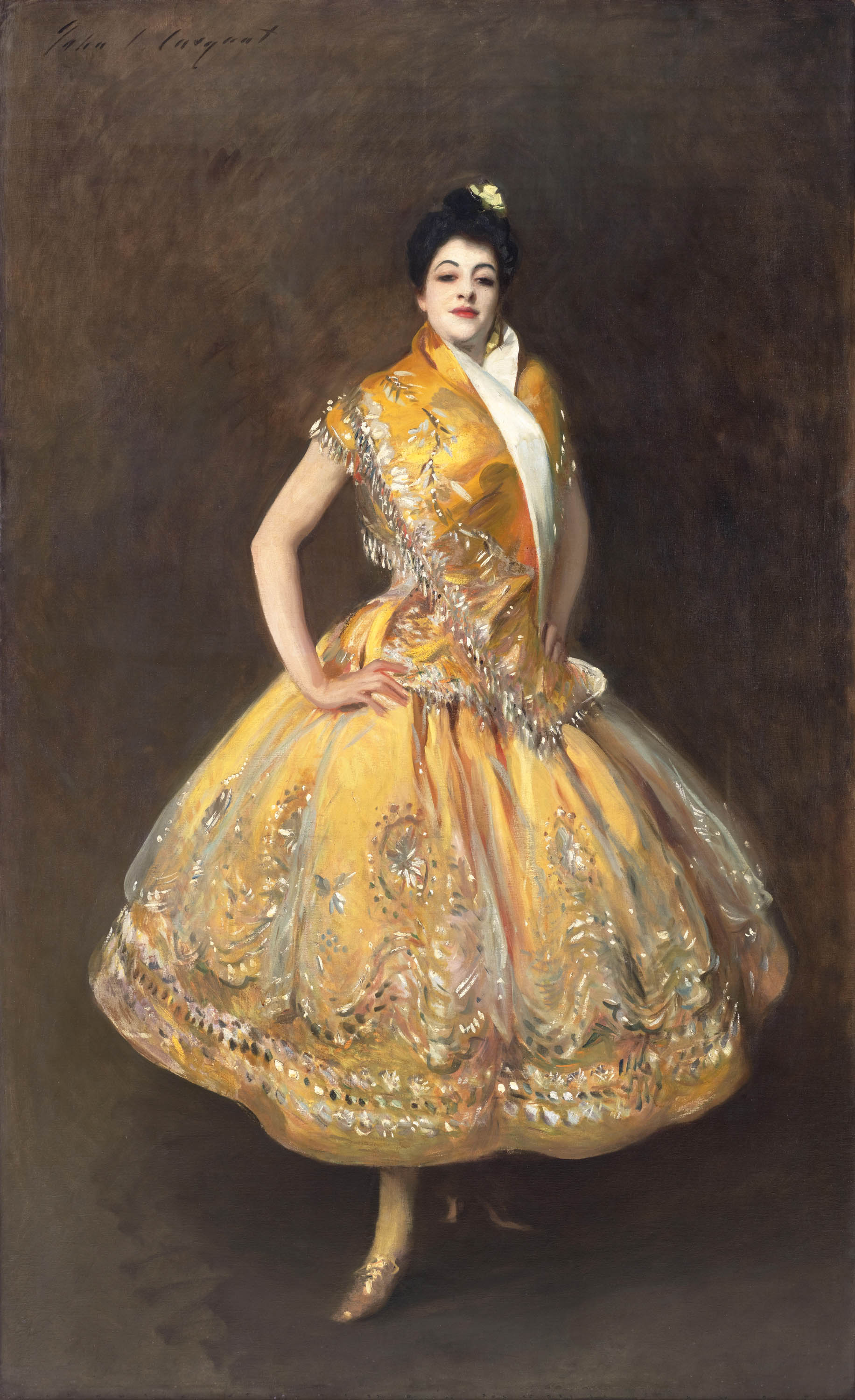 John Singer Sargent (1856-1925) hardly spent time in Chicago, but during his lifetime many of his paintings did. As exhibition signage tells us, in a “quest for cultural prominence,” his work was included in over twenty local exhibitions between 1888 and 1925, mostly at the Art Institute. Presumably, that was because his portraits of British aristocracy were in such high demand. He was patronized by prominent Americans as well, especially Charles Deering, who moved to Chicago a few years before becoming chairman of the board of International Harvester, a new industrial conglomeration made from his father’s Deering Harvester and the McCormick Harvesting Machine Company.

Serving the requirements of an aristocracy, or those who wish to join it, is not an unusual career path for an artist, and Sargent was unusually good at it. His life-size, full-standing portraits of well-born women are more like monumental dolls than paintings. A finely modeled face sits atop a swirl of gorgeous fabric, accompanied by a hint of elegant furniture and a backdrop that recalls formal portraiture of the eighteenth century. Very tasteful, very charming, and very expensive—though, curiously, mostly executed with humble earth colors. Sometimes they may even have been life-changing, as with a young Chicago heiress, Miss Daisy Leiter. Her pose now appears awkward and contrived, but she did become a countess after marrying the nineteenth Earl of Suffolk.

Sargent’s portraits of older men are much more interesting. In a commissioned portrait of John D. Rockefeller, he portrayed the limp body, tight lips and pitiless eyes of a uniquely American kind of monster, the business tycoon who crushes competition to dominate an industry. In a more intimate, noncommissioned portrait, he depicted the animated face of the iconic American actor, Joseph Jefferson.

Much of Sargent’s other work is fascinating, though often disappointing. Traveling around Europe with his peripatetic parents, Sargent seems more native to the world of European art history than to any particular place. He was especially fond of Venice, and in the scenes painted in his mid-twenties, he applies the dramatic chiaroscuro of Tintoretto to scenes of ordinary life. The figures are drawn with great sensitivity, the rooms feel tangibly damp, and the daylight is thrilling as it pours through the windows. The narratives, however, veer toward the melodramatic, with attractive, impecunious young women who presumably need the protection of the older, wealthier men who might buy the painting. 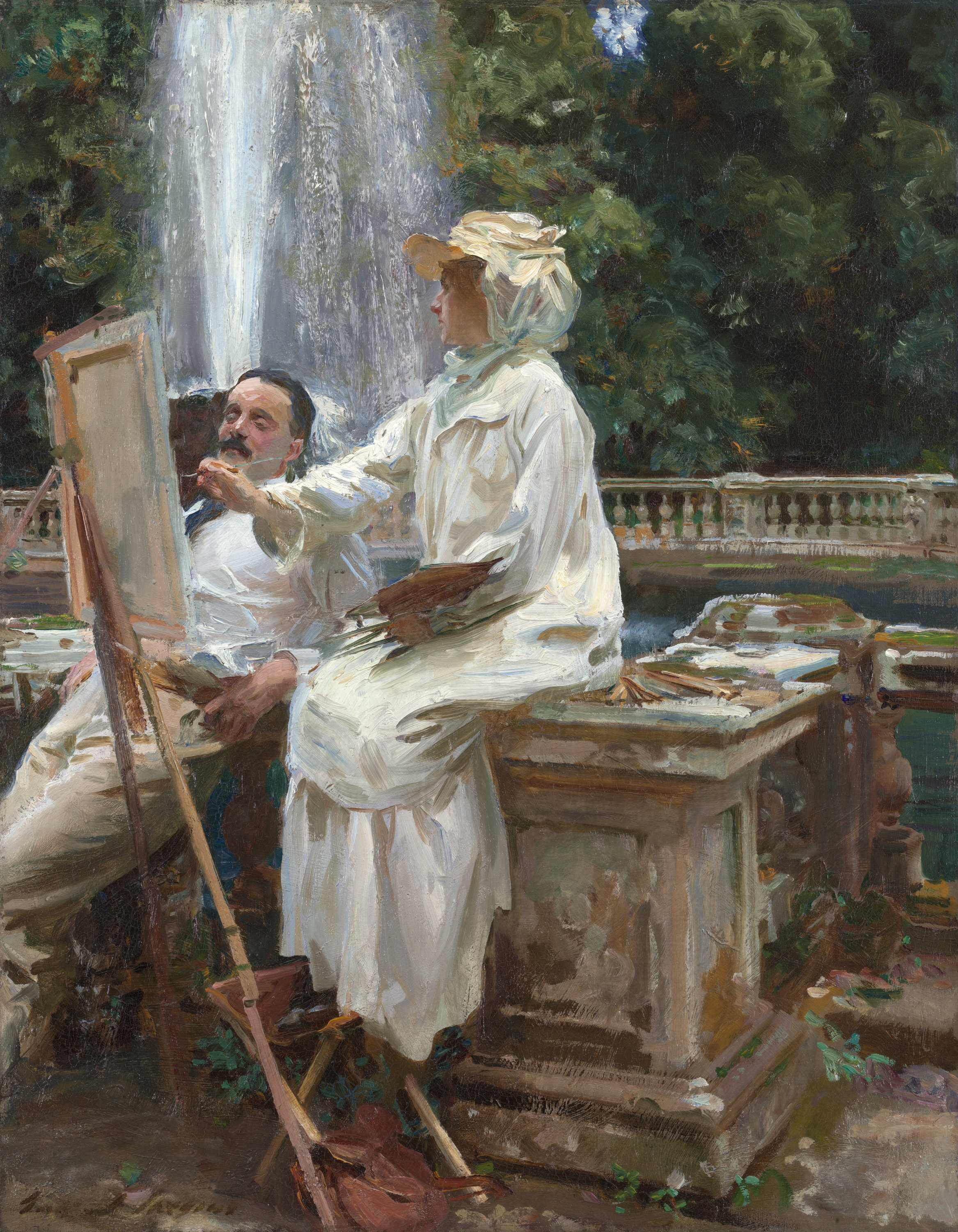 As gallery signage suggests, Sargent’s landscapes are often “remarkably abstract.” The all-over wispy streaks in “Thistles” (1883-89) is not that far removed from the action paintings done a few generations later. It expresses, however, neither an anxious personality nor a sense of place. You can feel the artist’s virtuosity, but not much else. The many watercolor views of Vizcaya, the palatial estate that James Deering built near Miami, Florida, are nothing more than pleasant. Sargent’s landscapes only come to life when he puts his friends into them. He depicts his lifelong friend, Charles Deering, relaxing on a beach in Miami, like one more husk washed ashore to dry in the sun.

Five charcoal figure drawings represent the artist’s attempt to address the great themes of human destiny with naturalistic depictions of the nude—an ongoing project of European art history still going strong in both the academic and early modern art of his time. Sargent’s linear virtuosity is breathtaking, yet it also overwhelms any graphic energy, narrative drama, or inner life of the characters depicted. All these handsome young men feel like boy-toys. Compared to the figures drawn by Michelangelo, to which they obviously refer, they are shallow and vapid. Perhaps, however, that is appropriate for a modern, secular world driven more by open desire than by shame and guilt. 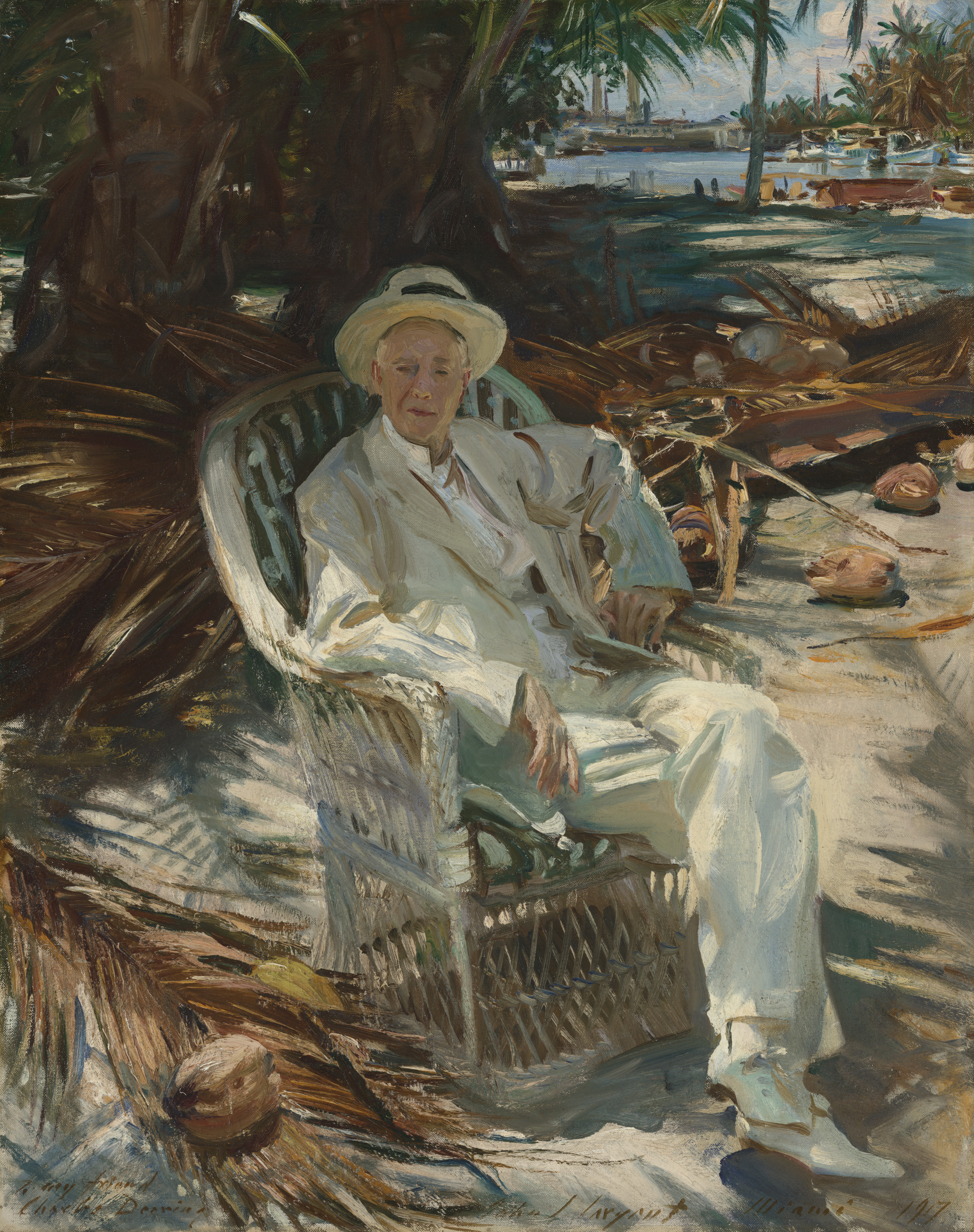 Also noteworthy in this show are works by a dozen or so friends and contemporaries. Dennis Miller Bunker’s “The Mirror” and William Merritt Chase’s “Portrait of a Lady in Pink” contrast nicely with Sargent’s full-size portraits of elegant young women hung nearby. They show quiet moments of reflection rather than glamor.

Just like the Art Institute’s “Picasso in Chicago” exhibit of 2013, this show searches for local connections with an iconic artist who hardly ever visited the city—undermining Chicago’s perennial “quest for cultural prominence” even as it is pursued. And just like Picasso, Sargent was a prodigiously gifted artist working in a transitional era in European art history. Perhaps because he was twenty-five years older than Picasso, Sargent tried to adapt an older formal language rather than invent new ones. Though the results are never ugly, sometimes they are boring. It would have been a much different show had it focused on the artist’s very best work. His monumental portrait of the Wyndham Sisters would have made for a great exhibition, all by itself. (Chris Miller)