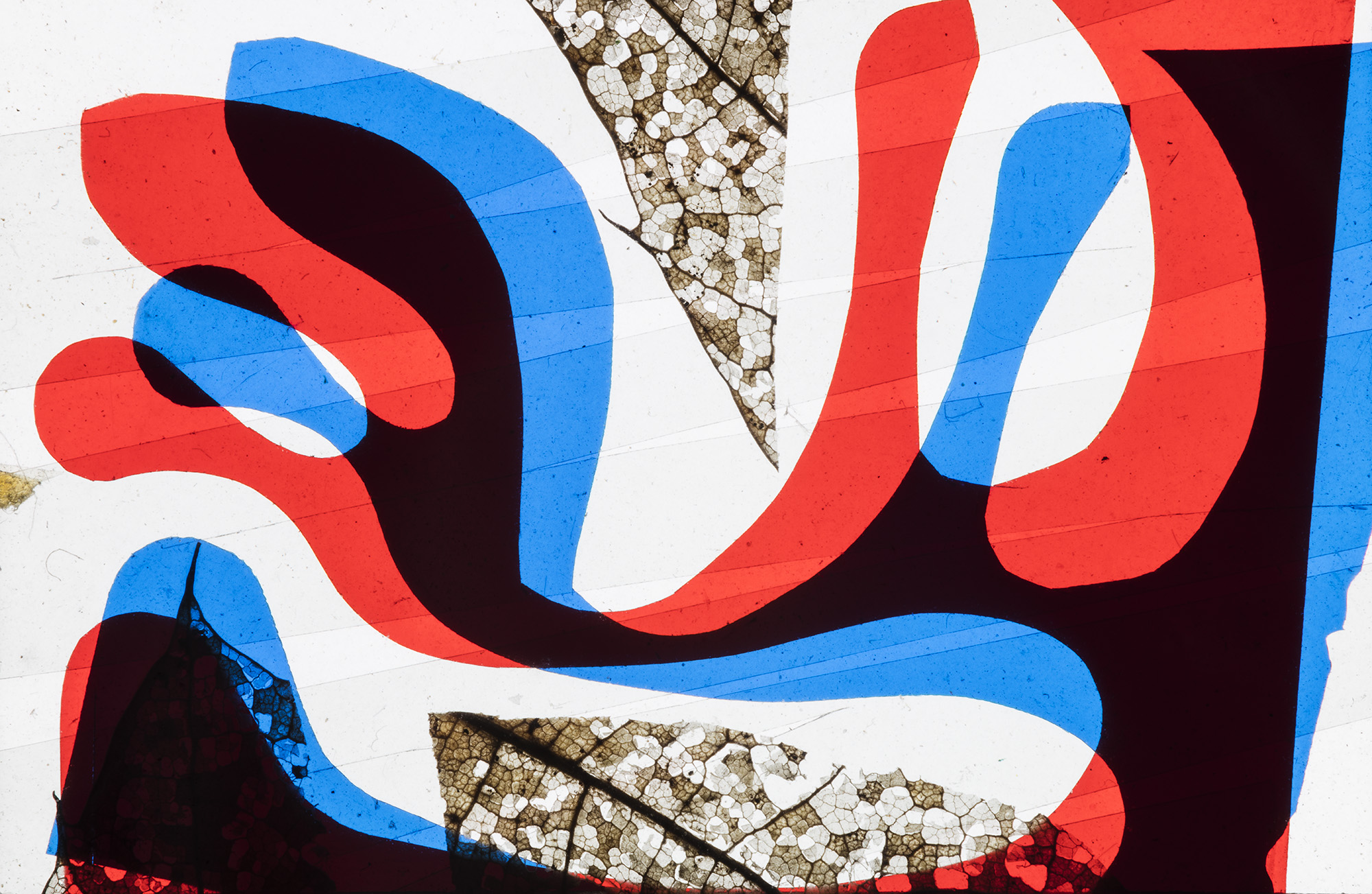 It’s likely that you’ve encountered the work of Morton and Millie Goldsholl without knowing it. Maybe you drink a lot of 7Up. Perhaps you’ve enjoyed a classic Chicago hotdog made with Vienna Beef. Maybe you were lucky enough in high school to own a Motorola Razr with that beautiful silver M on the center of your first cell phone ever.

Amy Beste and Corinne Granof have been working over the last several years to tell the story of Minnie and Morton Goldsholl, the Chicago designers and filmmakers whose studio, Goldsholl Design Associates, created some of America’s most ubiquitous brands.

Their research on the Goldsholls will debut with an exhibition and catalogue titled “Up is Down: Mid-Century Experiments in Advertising and Film at the Goldsholl Studio” at Northwestern University’s Block Museum of Art this fall. The show will bring together the wide-ranging work of the Goldsholls—their films, their advertising work, their industrial designs, their educational programs.

The Goldsholls opened their studio in 1955, during a period when Chicago was known as the Hollywood of industrial film, but it was also during the heyday of the New Bauhaus, when the influence of the European avant-garde, notably of Chicago immigrant Laszlo Moholy-Nagy, of whom the Goldsholls were students, was particularly strong.

“The studio was fostering experimentation and collaboration and producing both artistic work and commercial works that spread ideas and versions of the avant-garde to a mass public,” Beste says. To her, the simultaneous flourishing of both corporate and experimental forms of image-making is what makes the Goldsholls a unique studio to research.

Both Granof and Beste emphasize that the Goldsholls’ work goes beyond simply spreading a Bauhaus aesthetic to mass audiences but was more primarily concerned with disseminating Bauhaus ideals of design as an endeavor to improve quality of life. For the Goldsholls, their commercial and artistic work did not necessarily have to be at odds. In fact, corporations were seen as a channel through which designers could help improve everyday life.

It’s an unusual relationship to consider in our contemporary moment of Jeff Bezos’ obscene wealth and Elon Musk’s space dreams. It’s hard to believe that a designer could work through corporations to challenge socio-political norms—to challenge consumerism, to do meaningful work other than that of providing a palatable “corporate identity” that makes us feel less guilty when engaging with corporate giants.

Granof describes reading the transcripts of the International Design Conference in Aspen (IDCA) of which Morton was the chairman in 1959. “The very philosophical way they were talking about design at this point may strike you as a little naïve,” she notes. “We’ve now become very cynical about what design can do, but they had this belief in the kind of impact they thought they could have through design and working with big business.”

Beste connects the Goldsholls’ relationship to corporations to their interest in materials. “They had an investment in experimentation and material which translates into an interest in material life,” she says. “How do people understand their lives through the materials they engage with?”

Instead of characterizing the Goldsholls’ design approach as a stubborn optimism, it would be better to understand their firmly held conviction about the responsibility of designers to help people in everyday ways, a belief that makes it impossible to sever all relations with corporations. 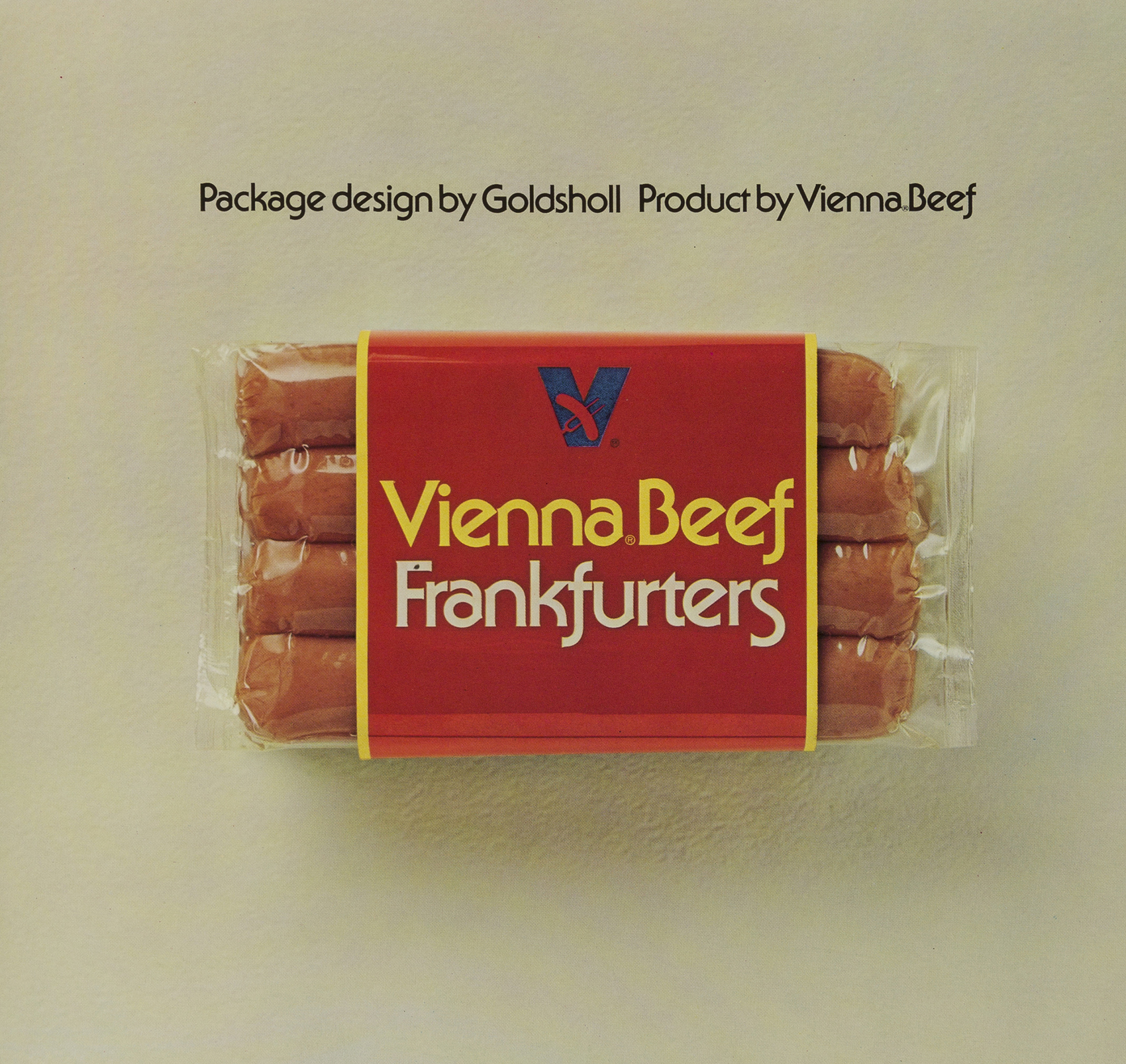 “Both Morton and Millie were interested in the impact they had on the world through corporations,” Beste remarks, “and I think they were trying to figure out what their relationship should be to corporations throughout their entire career.”

Surveying the expanse of their design practice, the numerous ways the Goldsholls tried to navigate this relationship becomes evident. Beste described how in the sixties, the Goldsholls had work that touched people’s lives in many ways:

“At the high point of their career in the 1960s, you could go to a grocery store and pick up a Goldsholl-designed package, you could see a Goldsholl commercial on television, you could see a Goldsholl educational film in your classroom,” Beste says. “They and other designers of the period were invested in the application of avant-garde principles—how do we affect everyday life, how do we make it easier for people—and were thinking about it from a myriad of different perspectives. In the case of the Goldsholls, it was the perspectives of packaging, graphic design and film.”

A key example of the Goldsholl approach to design is the educational film, “Up is Down” (1969). Directed by Millie Goldsholl and acquired by the educational film distributor, Pyramid Films, the film is designed for a primary school audience and offers a discussion of conformity. Beste describes the film as “a faux-naïve animation intercut with a pretty intense montage of contemporary atrocities… vivid documentary examples of income disparity, war, poverty and civil rights violations.”

For Beste and Granof, this film shows that the Goldsholls didn’t shy away from questions about the responsibility of the designer or filmmaker to their corporate clients. The Goldsholls’ interest in helping people with their daily lives also meant helping people to understand the world in which they live, making them cognizant of the ways they can choose to participate in it. 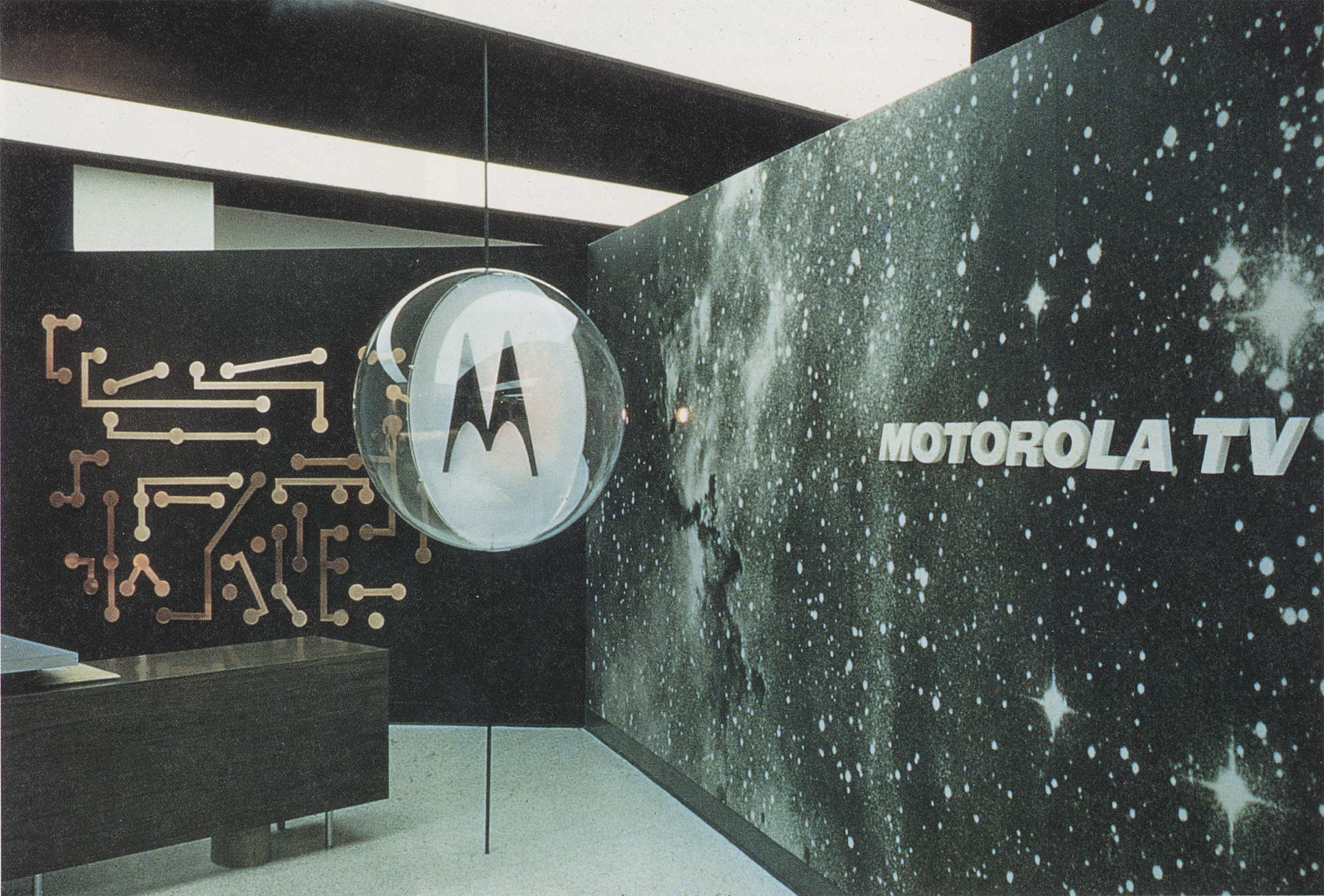 “A lot of the things that the Goldsholls were designing often just ended up being consumer related,” Beste says. “But part of the questions that Millie was engaging in ‘Up is Down’ turned big social and political questions into questions of consumer choice.”

Studying the Goldsholls now may achieve that same goal of helping people understand everyday life. Beste talks about how the postwar period in which the Goldsholls were at their peak is surprisingly reminiscent of our own.

“There’s this interesting moment in midcentury in the 1950s and sixties moment which kind of presages a version of the screen culture we have today: where screens are really prevalent and an important mediating part of everyday life,” she observes. “The Goldsholls were making films that were meant to be shown on screens that you would encounter in your everyday life. You would see them at the store, in school, maybe in a museum auditorium, shop windows—they even made some films that were made for point-of-purchase at department stores in addition to the work that showed up on television.”

Granof describes the story of the Goldsholls as an unwritten history. “It’s an unwritten story of Chicago history, of design history, of film and television history,” she says. “Not many people recognize the name Goldsholl, but they play this really vital role in midcentury design and film that in some senses could only come out of Chicago and the environment here and the film history here.”

So why write this story? How does the story of the Goldsholls change Chicago history? Design history? Film history?

Beste hopes that putting a spotlight on the work of the Goldsholls will expand the frame of film and media as a serious object of study. “Taking seriously the work of designer and artist filmmakers like Goldsholl Design Associates makes us reconsider a whole other history of filmmaking and media making,” she remarks. “It makes us take more seriously that there is a kind of precedence for our contemporary media culture in addition to making more viable things that we think of as the small screen as objects of inquiry.” 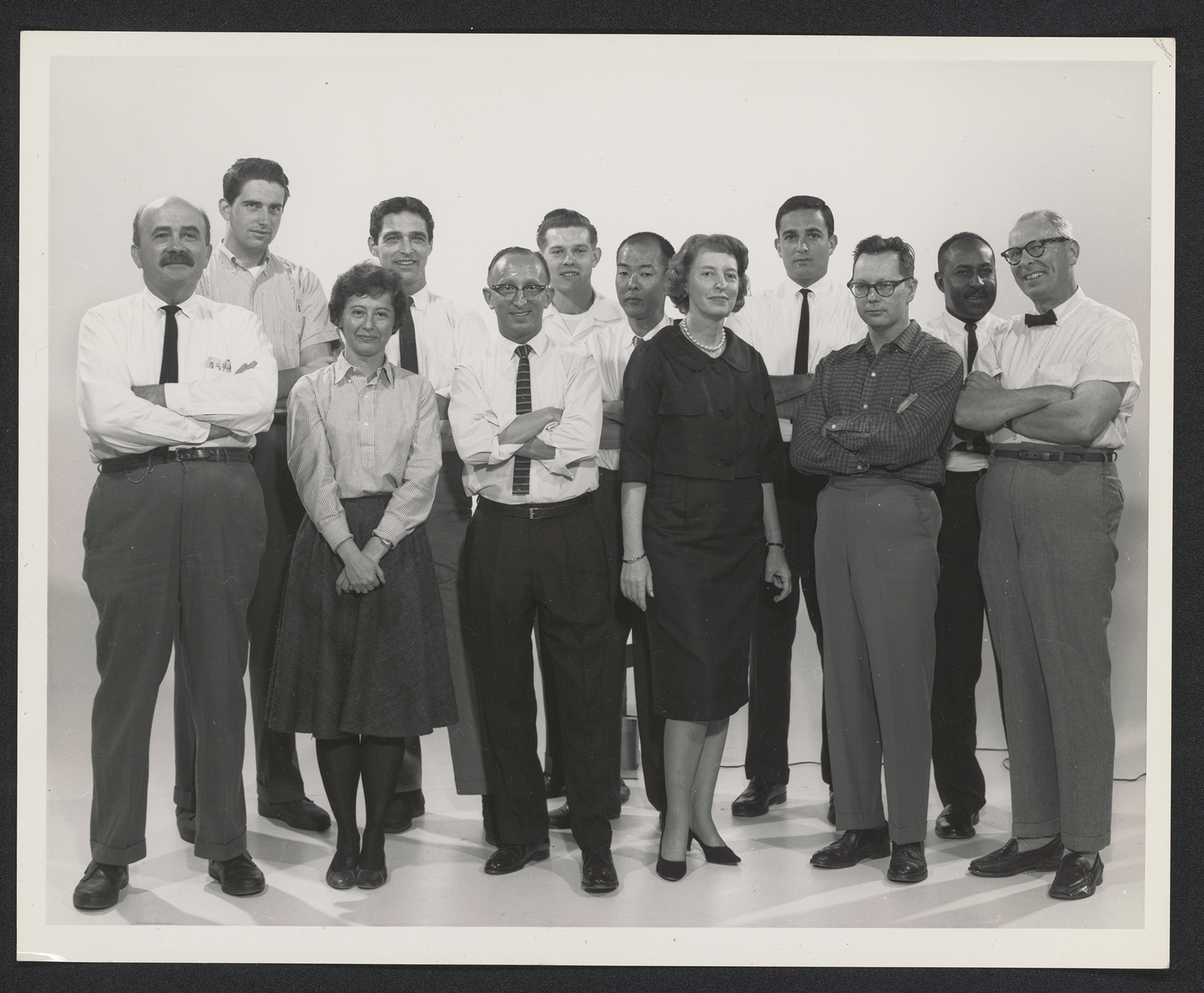 Granof adds that the Goldsholls’ impact on the history of film and design goes beyond the creative output of the studio. She points to them as an example of progressivism. Although a fairly small studio, with only twelve to twenty-four on staff, she describes its relative diversity in a time of extremely restrictive hiring practices. Thomas Miller, an African-American Chicago artist now well-known for his mosaic portraits, was a senior graphic designer at the firm for over thirty years. Granof also points to the promotion of Susan Jackson Keig as vice president of the firm before she went on to start her own studio.

But in addition to all of that, Beste and Granof want viewers to connect the Goldsholls’ familiar designed images to the people who made them.

“People will see a lot of things that are familiar to them and recognizable in Chicago, especially things like the Motorola logo or the Vienna Beef logo which Mort ‘amended’ for Vienna Beef,” Granof says. “I’m excited for people to see that and be able to connect that to the people who created those kinds of logos.”

In making that personal connection, Beste and Granof have included work in the exhibition that was made privately and not necessarily intended for a public. In particular, they are both excited to share Morton Goldsholl’s light paintings.

“We just discovered these one day in the course of our research,” says Granof. The light paintings are small collages with things like seeds, cotton and film gel pressed between two-by-two-inch slide glass and illuminated by the light of a microscope. In the exhibition, they will project scans of these paintings. “They’re just stunning,” she marvels.

A consumer can often forget the presence of the designer. Curators like Amy Beste and Corinne Granof remind us of the human behind the design—Someone sitting at a desk, thinking about the world they live in, its problems, how to fit within it, how to care for it.

Amy Beste and Corinne Granof will participate in a panel discussion “Making the Modern Image: Mid-Century Commercial Industry in Chicago,” alongside additional panelists Theaster Gates, Lara Allison, and moderator Michael Golec at EXPO CHICAGO on Friday, September 28 at Navy Pier. “Up is Down: Mid-Century Experiments in Advertising and Film at the Goldsholl Studio” shows from September 18 to December 9 at the Block Museum of Art, 40 Art Circle Drive, Evanston.