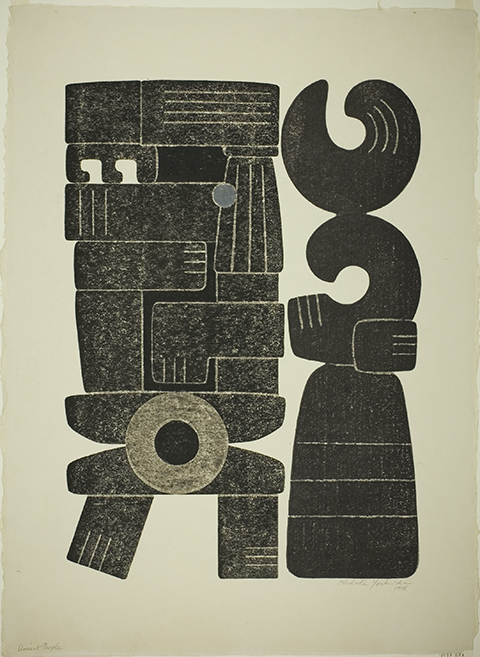 The differences between these three generations of Japanese printmakers is most enjoyably seen in three depictions of water.

First we have “Rapids” by family patriarch Yoshida Hiroshi (1876-1950). Hiroshi exemplifies his generation’s transformation of Japan into an international power and modern industrial state based on European technology. Trained in European pictorial realism, Hiroshi traveled around the world many times, bringing back exotic scenes like an evening camel ride past the Great Sphinx or a snake charmer attracting a crowd in India. The formal intensity of these pieces does not rise above travel illustration, but his depiction of Class III rapids is both larger and more virtuosic, delineating the turbulent water as it flows, falls, crashes and eddies. Every line is heartfelt and perfect.

Then we have “Ice Floe” by Hiroshi’s daughter-in-law Yoshida Chizuko (1924-2017). The jagged edges of breaking ice have been mechanically transferred from a photograph so they feel arbitrary and harsh as they strictly follow the laws of one-point perspective. The overall design, however, is transcendent and thrilling. After Perimeter Gallery closed last year, this kind of Asian tribute to nature has seldom been shown in Chicago.

Finally, there is “Touches,” a series of prints by Chizuko’s daughter, Yoshida Ayomi (born 1958). Based on photographs of the Kanda River as it flows past her parents’ home, she borrowed the pattern of light reflecting off the water and recreated it in stronger colors. The effect is quite decorative and would be even more so if transferred into woven fabric. Actually, most of the work in this exhibition would look better as tapestries than as woodblock prints framed under glass and shown under dim lighting. Up to seventy layers of dispersed pigment may have been applied to achieve subtle gradations and depth of color, but most of that is lost under the viewing conditions required for preservation. 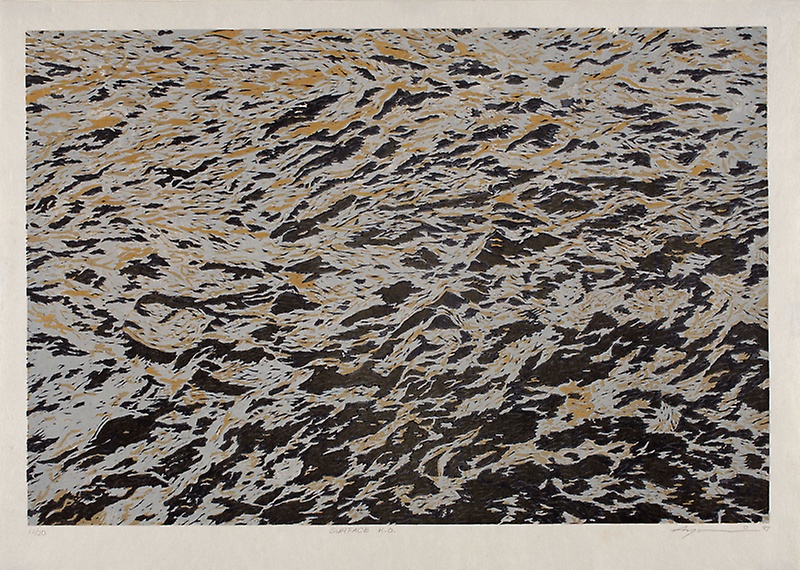 The Yoshida family is quite traditional. The family business has been handed down through generations that date even further back than Hiroshi, who was adopted into it as a talented youth. Gallery signage notes that his son, Toshi (1944-1995), did not break free of his father’s realistic pictorialism until his father’s death. Regarding gender equality, however, there are as many female as male artists in this exhibit. Hiroshi’s wife, Fujio (1887-1987) often traveled with her husband and may have been the first Japanese female artist to visit the United States. We might also note that each generation of Yoshidas follows the trends of its own time rather than holding onto any specific tradition. Sadly, that means that Hiroshi’s skillful delineation of figures and control of ambient light was not carried on by his descendants. It also means that Ayomi, the youngest Yoshida, no longer makes woodblock prints at all—she is now a conceptual installation artist. My favorite pieces in the show, however, are the dreamlike, melancholy abstract landscapes by Chizuko, done in a style quite different from any other family member.

Ayomi’s website includes a tribute to the artists of her distinguished family, and it appears that she will be the last. As the modern era of art-making comes to a close, the Yoshida family art-making tradition may be coming to an end as well. (Chris Miller)

“The Yoshida Family: Three Generations of Japanese Print Artists” shows through September 30 at the Art Institute of Chicago, 111 South Michigan.