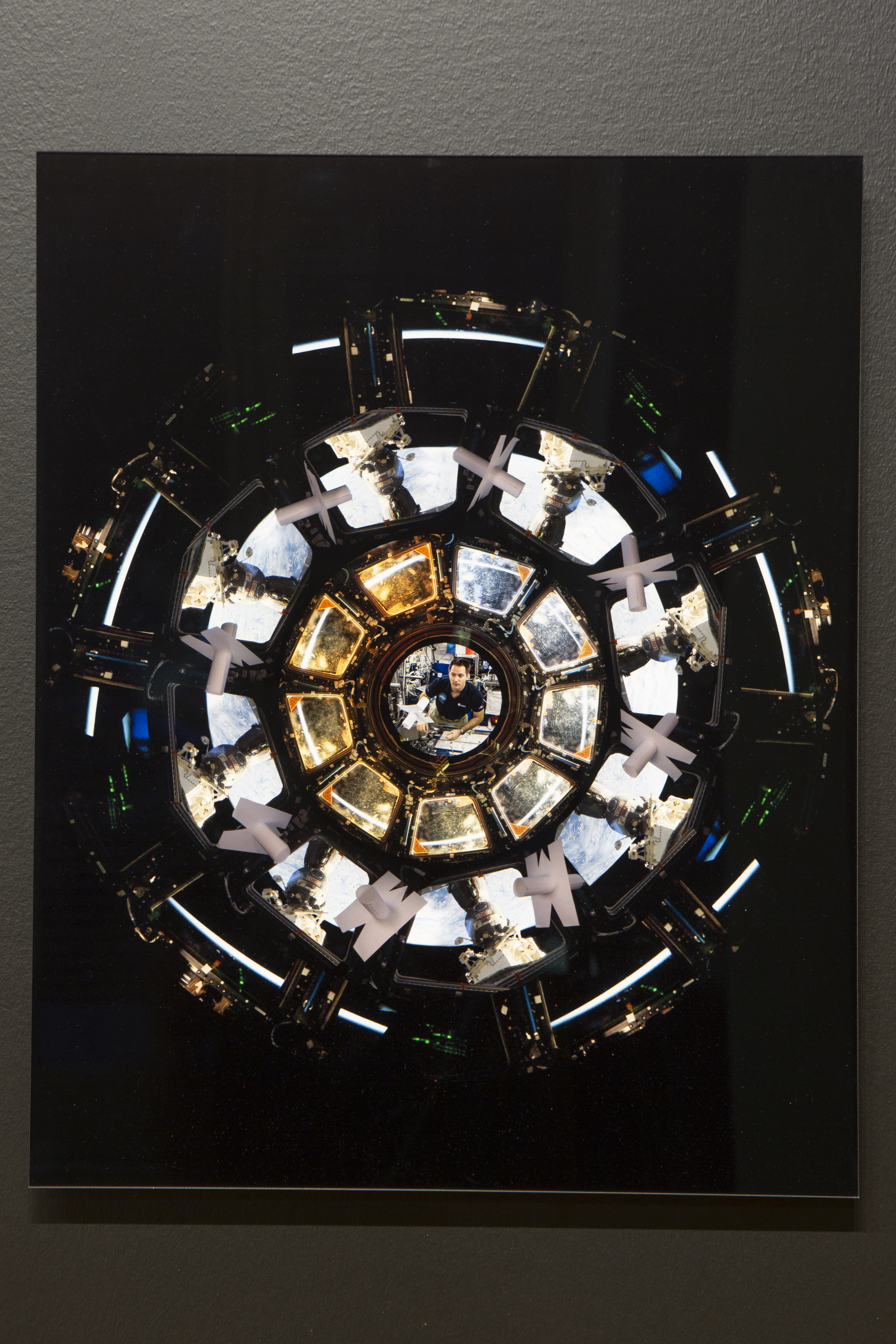 The first artwork to be made in and for space is less grandiose than one might imagine. Created at a scale that could easily be held in someone’s hands, it is also made with unremarkable, elementary tools and materials—a pair of scissors and a sheet of paper. The question arises, however, if anything can really be termed unremarkable when made for the unexplored immeasurability of space. Eduardo Kac’s “Inner Telescope” is both made and documented inside the International Space Station (ISS). It is essentially a site-specific artwork made for the nonspecific vastness of space. Abstract and reminiscent of a simplified, orbiting satellite, “Inner Telescope” is the composition of three letters: M, O, and I, which spell out “Moi” (“me” in French). Kac has been an artist in residence at L’Observatoire de l’Espace, the cultural lab of the French Space Agency for several years. He is famed for his development of “bio art” in the late 1990s and early 2000s, when artworks by multiple artists began directly incorporating the biological sciences, specifically genetics. Kac is widely known for “GFP Bunny” (2000), in which he infused a rabbit with jellyfish DNA, causing it to glow green under blue light. Affectionately named Alba, the glowing rabbit and other projects from the bio-art era pushed artistic practices into expanded territories. The move from testing the limits of earthbound constitutions of art to those formatted entirely for space might seem logical for some viewers, but the real undercurrent of these projects is a deep investment in poetics, language and the philosophical self.

Installed at Sector 2337 and co-curated by Fulla Abdul-Jabbar and Caroline Picard, the exhibition is titled “Inner Telescope,” after the central video piece that anchors the show. The video has been screened in other parts of the world, but this is notably its first North American installation. Upon entering the gallery, only the anticipatory ambient humming of “Inner Telescope” can be heard; the video is not yet revealed. Instead, two sets of small wall works introduce the project. These pieces pair human forms with Kac’s “Inner Telescope” sculpture. The first, titled “In Orbit I” and “In Orbit IV,” are a pair of digital photo collages in circular and cascading arrangements that are meant to simulate the weightless, directionless orientation of space. Unfortunately, the simple design of these works comes off as campy, their intention being far too ambitious given their pedestrian execution. The subsequent series is much more successful, primarily for the rich materiality the chosen embroidery method provides. In these works, titled “Space Poetry III,” “VII” “IX” and “X,” blissful bodies bend and float through the expansiveness of space. Their soft forms are depicted in solid colors that span several hues, while the overlapping sections create additional tonalities. The rich weaving of bright delicate thread lithely layers on a white background which surrounds the figures instead of foregrounding them. The feeling of being cradled by space becomes materially animate in this series. An ecstatic playfulness emerges in these works in their careful construction and haphazard orientation. These are not actually a scene of figures, but rather the same body repeated. This signifies they are more likely condensed temporal formations that contain multiple experiences from one person, compared to a community of space travelers. 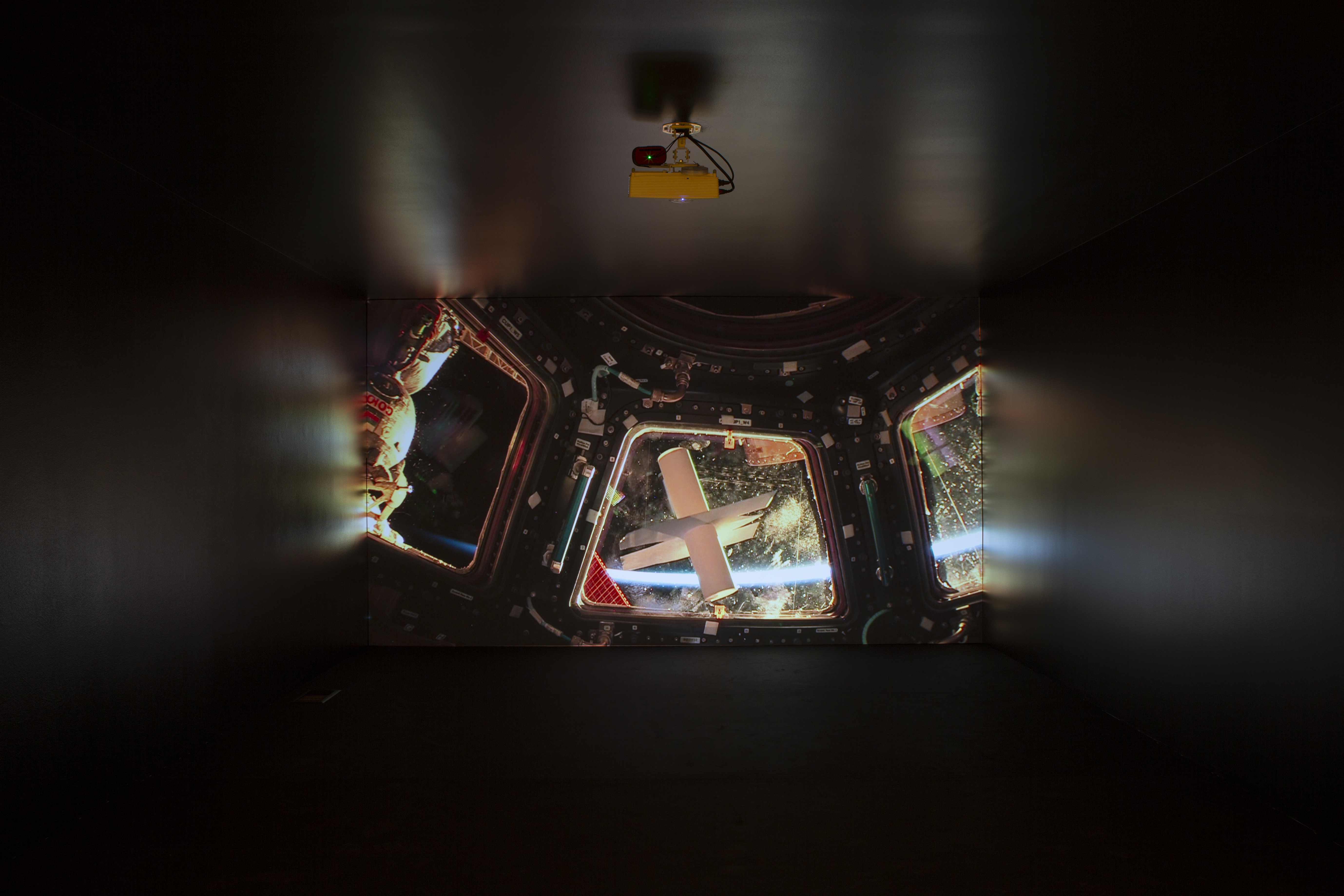 This doubling and multiplying approach to a single self in order to realize one that is variable and ungrounded is at the center of Kac’s project. This is the reason for creating such a simple artwork that is specific to space and constructed from the word “moi.” For Kac, the simplicity of the work stimulates conceptual complexity. “Moi” signifies a singular and collective linguistic self, and Kac’s goal is to bring language and a reader or writer’s body closer together. The sculpture attempts to do this while also providing a white, abstracted form for viewers to project themselves onto. “Inner Telescope” is a video that documents the making and situating of the paper sculpture by French astronaut Thomas Pesquet at the International Space Station. The viewer is given Pesquet’s point of view for the duration of the video, allowing each person to seemingly experience the making and launch of the sculpture at their own discretion. They are also insulated in ambient humming, unfamiliar yet comforting. After being cut from its original sheet of paper and recombined, “Inner Telescope” is released. Its abstracted planes and contours are in near opposition to the extreme functionality of its technological setting, providing a moment of pause from the mechanical clutter of the International Space Station. The camera follows the sculpture as it floats while doing somersaults through the narrow halls, twirling in unpredictable directions as it gently collides with its environment—a metaphor for experience. Eventually, it arrives at fixed video frame in front of a window that looks out onto Earth from the International Space Station. This scene calls forth the magic of “Inner Telescope” and its site-specificity. Being an earthbound viewer, however, one wonders if any quotidian object would be similarly mesmerizing if floating through space with a big blue Earth in its background.

In addition to the video and wall works, a small hallway shelf displays three incredible artist and small press books. “Scripta Volant” contains a 2007 “Space Poetry” manifesto by Kac, drawings similar to the embroidered “Space Poetry” series, and a multi-positioned essay by curators Fulla Abdul-Jabbar and Caroline Picard. Subsequent artist books depict instructions for making “Inner Telescope” and colorful risograph-printed bodies floating through space. Though Kac’s desire for a disoriented—or more precisely, an infinitely-positioned self—is admirable, one wonders what this speculative space-inhabiting future offers our polarizing present. At a time when current politics disavow intersectional subjectivities, a self able to see multiple positions is in dire need. It seems this component is largely absent from the show, leaving the artist’s intention hanging in space watching a crumbling world below. Though looking to space and the sky has been ingrained in human dreams since the birth of consciousness, it is hard to see more than a neutered escapism in Kac’s overall ambition. Perhaps the focus is placed too heavily on “moi,” and gets in the way of everything and everyone else. (Jameson Paige)