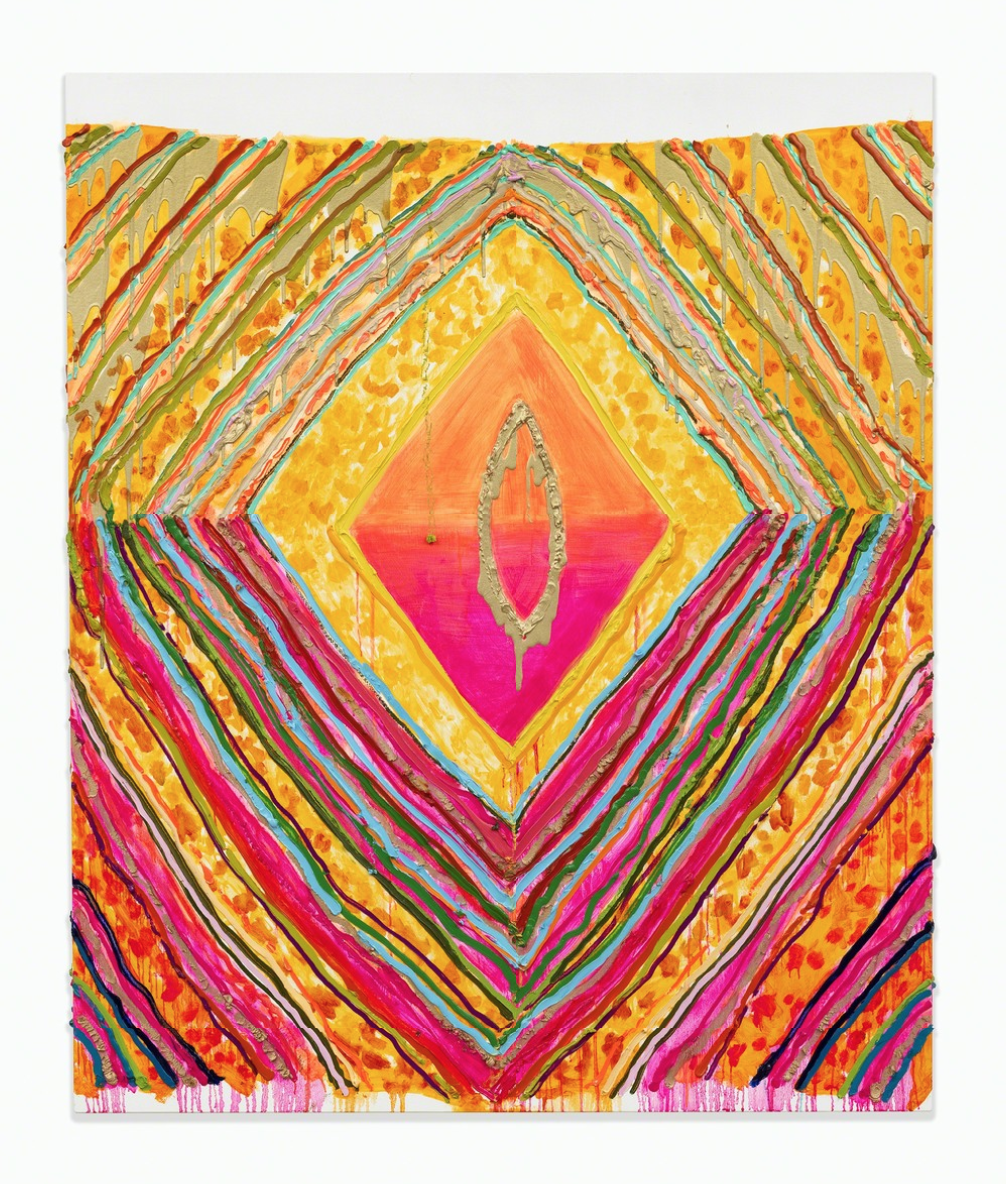 3Arts & 6018North (Chicago), 473
“Wherever we are, we invite artists to transform spaces through art while drawing people together,” reads 6018North’s website. This booth is a perfect embodiment of that sentiment. Designed by Amanda Williams, the space, called “Sanctuary,” is meant to be a prototype of the “Justice Hotel,” “a think tank for embodying the ideas and actions that support social justice and self-care.” Participants interested in entering must first contemplate what they would personally give up so that other people could have justice. Once you’ve entered your exchange (anonymously) into a box, you bang a gong and have your choice of artists offering interactive self-care activities. These alternate depending on the artists on duty. While I was there, one read tarot and another offered to help process a past harm. On your way out, make sure to sample Maya-Camille Broussard’s cobbler, from her “Justice of the Pies” project, which aims to deliver quality baked goods while positively affecting the lives of her employees.

MSU Broad (Michigan)
The Eli and Edythe Broad Art Museum at Michigan State University has joined forces with artists Oscar Tuazon, Dylan Miner and Chicago’s Spudnik Press Cooperative to draw attention to the state’s ongoing water crisis. Miner was on site to silkscreen a set of five posters designed collaboratively by himself and Tuazon. The prints feature colorful maps of Flint, as well as the areas around Michigan State, overlaid with copies of government permits, correspondence from Flint’s Emergency Manager and other crisis-related bureaucratic paperwork.

Rhona Hoffman Gallery (Chicago), 219
The hometown gallery features an impressive roster of female artists at this year’s booth. Their offerings include “Yoni,” a vibrant oil painting by Chicagoan Judy Ledgerwood. Diamond-shaped lines, reminiscent of an Ojo de Dios, border a central oval-shaped band of gold. Lorna Simpson’s “Shoe Lover” consists of three Polaroid photographs: a shoe box, a woman’s back and a pair of sparkly heels. Three large-scale photographs by Deana Lawson—exquisitely staged, intimate portraits of black families in their homes—are particularly stunning to see up close. And a 1980s-era Jenny Holzer plaque from her survival series offers a prescient message for today’s space-obsessed billionaires: OUTER SPACE IS WHERE YOU DISCOVER WONDER, WHERE YOU FIGHT AND NEVER HURT EARTH. IF YOU STOP BELIEVING THIS, YOUR MOOD TURNS UGLY.

Joyce Foundation/Salon 94 (New York), 435
This installation by Chicago artist Carlos Rolón offers the best visual approximation of the devastation wreaked by Hurricane Maria that I could imagine. A blown-up photograph of a destroyed home—absent a roof and a front wall, so the viewer can peer in as if it were a lifesize diorama—takes up the entire back wall, setting the stage for the detritus piled in front of it. Tree branches lie among clothing, a wooden chair, kitchen utensils, a broken window screen and a boxy TV tuned to white noise. As Rolón’s wall text makes clear, this disaster was made worse by United States imperialism at every step of the way. Decades spent decimating Puerto Rico’s environment for development helped destroy the defense systems needed in times of natural disaster. Not to mention the harm caused by the weakened economy and the ineptitude of FEMA and the Trump administration to offer aid in any meaningful way. Yet for Rolón there is always hope, as a pink neon sign hanging on the left wall makes clear. It reads ”siempre pa’lante,” a popular rallying cry from the Young Lords, which means forever onwards. 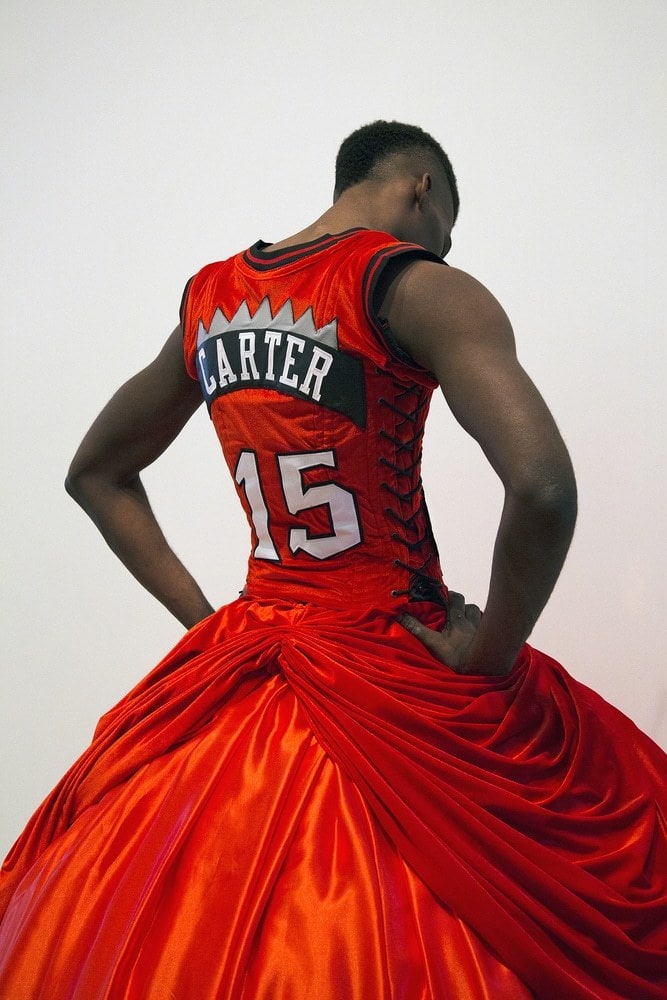 The Joyce Foundation/Salon 94 (New York), 435
The entire space is given over to an installation by Chicago’s own Carlos Rolón, whose pile of things highlights the destructive force of Hurricane Maria. As I inspected it, another visitor compared Rolón’s work to Jeff Wall’s seminal The Destroyed Room (1978). She couldn’t have been more wrong; Wall’s homage to Delacroix was a pre-meditated challenge to high-art traditions of painted violence and a more mundane commodity culture. This, on the other hand, is a raw indictment of structural neglect.

Georgia Scherman Projects (Toronto), 438
Esmaa Mohamoud’s Chicago Bulls ball gown and accompanying photographs offered some of the most social media-friendly content at the fair. But glossy appeal aside (although it’s clear that the work’s sumptuous qualities are part of its apparatus), she poses a smart challenge to hegemonic notions of sports and gender.

Smith Davidson Gallery (Miami), 444
Showcasing the work of artists like Rover Thomas Joolama and George “Hairbrush” Tjungurrayi, Smith Davidson offered a welcome chance to compare some of the more marked trends in contemporary Australian Aboriginal art. Walala Tjapaltjarri’s painted dots and rectangles shift eerily in and out of focus thanks to a masterful command of hues and shades. But Johnny Warangkula Tjupurrula’s “Water and Tucker”(1972), which stole the show in an exhibition at Paris’ Musée du Quai Branly several years ago, again stands out with its teeming chaos of cosmologically-charged marks.

Claire Oliver Gallery (New York), 428
Another crowd-pleaser, Claire Oliver introduced me to two artists whose work got well and truly under my skin. Bisa Butler’s spectacular textile portraits are a revelation, seducing the eye with colors and patterns while commenting wryly on episodes from twentieth-century black life. Barbara Earl Thomas invokes the history of the paper cutting, scissoring detailed pictures out of Tyvek.

313 Art Project (Seoul), Booth 357
Lee Wan, who represented South Korea at the last Venice Biennale, is one of the more interesting artists working with the history of the monochrome. Here, parts of his series “Diligent Attitude Towards a Meaningless Thing” connect the business of art production to forms of labor and consumption that put me in mind of Francis Alÿs. Their conceptual sophistication felt like a real intervention in a fair that trended increasingly toward spectacular fabricated things—neons, inflatables, gold plating.