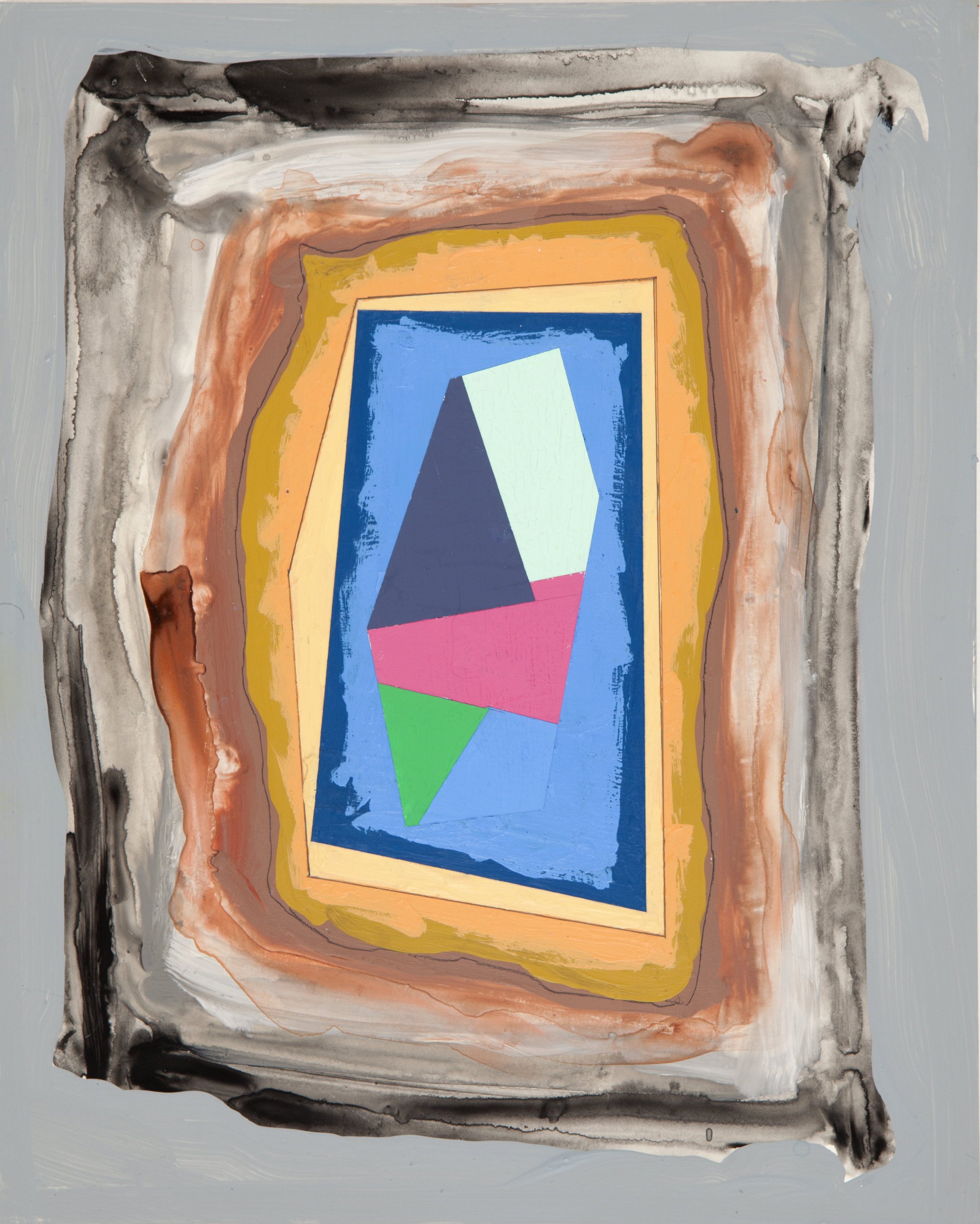 “Why don’t I just put the fucking thing in the center and dispense with all this old golden section, balancing, bullshit? There was probably a juncture where I thought that.”

It’s a sunny Friday morning, and the former art critic for Newsweek and I are sharing a bench in the Farmer Family Gallery at Ohio State University at Lima. We’ve met to discuss his new show, “The Age of Innocence,” and Plagens is pointedly gesturing to one of the multicolored “badges” that dominate the centers of his newest works.

The exhibition, which comes on the heels of a well-received show at Nancy Hoffman Gallery, features six large-scale canvases and four smaller collages. Frankly, it’s a weird show. “Bossy” and “not immediately likable” are phrases I use to describe them, and surprisingly, Plagens is okay with that.

“I’ll buy that,” he says. “I like bossy. I want them to be good-looking, but good-looking on my terms.”

The pictures are an idiosyncratic fusion of painterly drips, hard-edged geometry, and opaque color fields. The combination of disparate forms shouldn’t work, but strangely, it does. Visitors to September’s EXPO might recall Plagens’ curious juxtapositions foregrounding Hoffman’s booth. And while they’re more cerebral than emotive, the compositional simplicity aggressively asserts their presence. 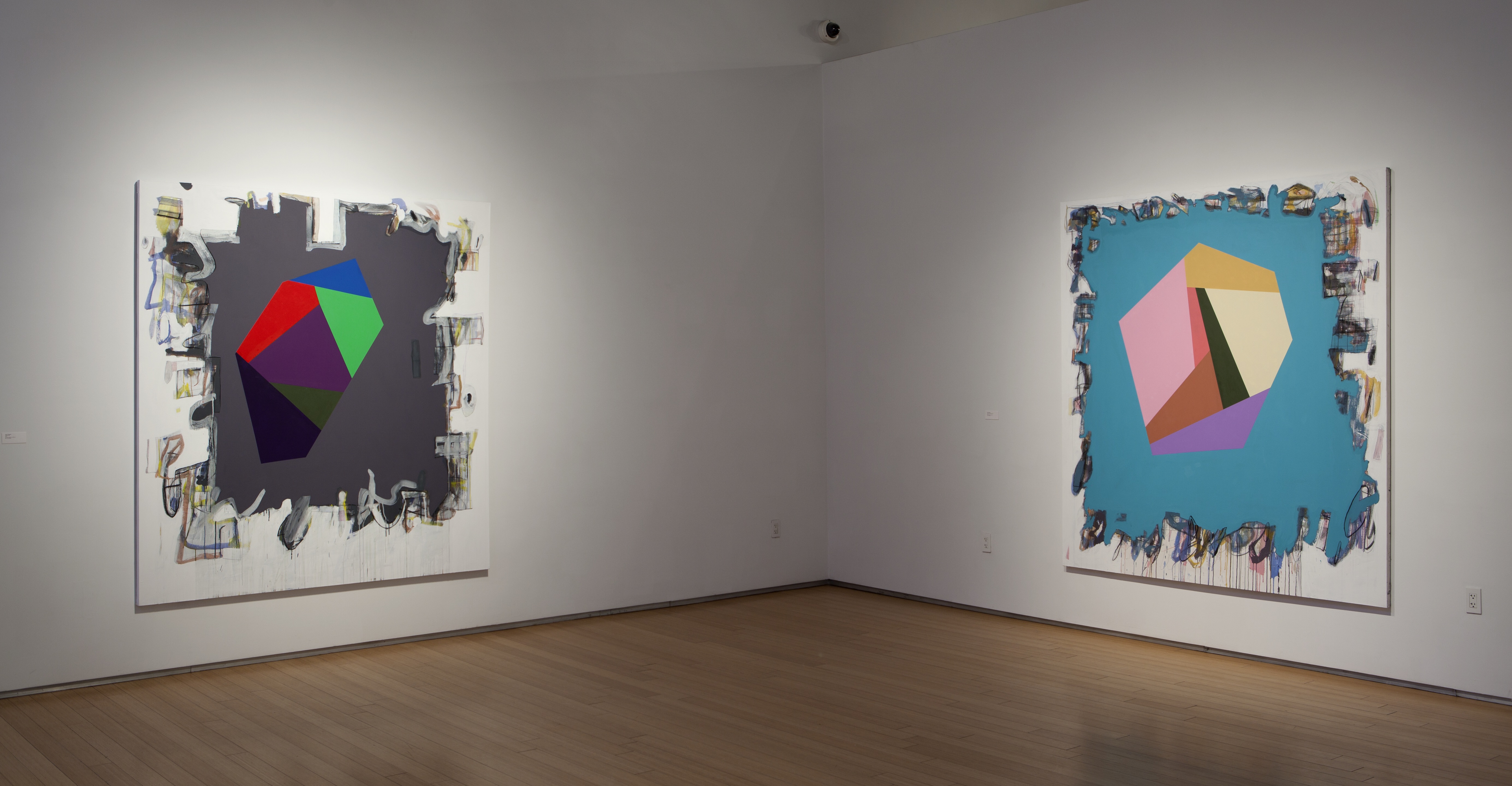 “They say to the viewer,” Plagens says, “You will accept this in conjunction with this, and they’re not going to make concessions. The badge isn’t going to be bowdlerized by composition, it’s all going to go central and that’s the bossiness.

“Some viewers don’t want to be bossed around. I get that. Not everyone is going to like that. But it’s painting, it’s not installation, you’re not trapped in a dark theater. You can turn and walk away.”

Throughout our conversation, Plagens alludes to a standing interest in existentialism, the incomprehensibility of the universe and the way these ideas are embodied in his painting’s obtuse formal structure. But it’s clear he isn’t out to mythologize painting or shroud his process in some kind of Frenhoferian secrecy.

“I’m a plugger,” Plagens responds. “I am not a leaper to great things. These paintings came out of the ones that came before, and the ones before that, and all the way back to Adam.

“They start with what my daughter used to call my ‘scribble-scrabble’ and then that gets filled in.”

This “scribble-scrabble” is an accumulation of loose gestures. They’re the most expressive, unmediated aspect of the works and there’s a translucent, Gorky-like quality to the visible layers of paint. In the finished works, they’re mostly painted over, but some of their frenetically brushed, earthen hues continue to flicker along the works’ periphery. They seem to be a memory, a boundary and an entry point.

“The color, everything on the outside and in the blob is subjective and made-up and mixed.”

“The badge in the center,” Plagens continues, “is unmixed, straight-from-the-bottle colors. There’s cadmium red light, cerulean blue, and so on. That clash of colors, it’s the tension between the namable, the objective and hard-edge against the subjective, the loose and the romantic.

“That’s my existentialism coming through. Nothing is ever settled, it’s always in flux.”

I ask Plagens about the telltale drips along the bottom edges of his canvases. “Signifiers of painterly-ness, I call them.”

As an iconic manifestation of American abstraction, I wonder: are they quotation, or a natural consequence of his approach? “I used to struggle with it.” He says after some consideration, “But how many painters have drips?

“You can’t be innocent about it. I’m aware of the tropes. I know they’re there, I can’t unsee that, I can’t unlearn that.

“I’m especially responsible because I paint in bastardized acrylic paints and they dry quickly and I can easily cover them up. I could take them out if I wanted to.

“But they’re not left in to suggest that, you know, I’m so passionate, like rock musicians who smash their guitars,” he says with a laugh.

“One is loathe to quote Ronald Reagan, but he once said that the thing you need in order to be an actor is sincerity, and once you can fake sincerity, you got it licked.

One gets the sense that this union of opposites, so crucial to the experience of his works, are also a microcosm of Plagens’ career; an artist who is probably best known as a critic, a self-confessed “lower-middle-class kid” from Dayton, Ohio who nonetheless moved to California, was pals with Bruce Nauman, and still writes for the Wall Street Journal. 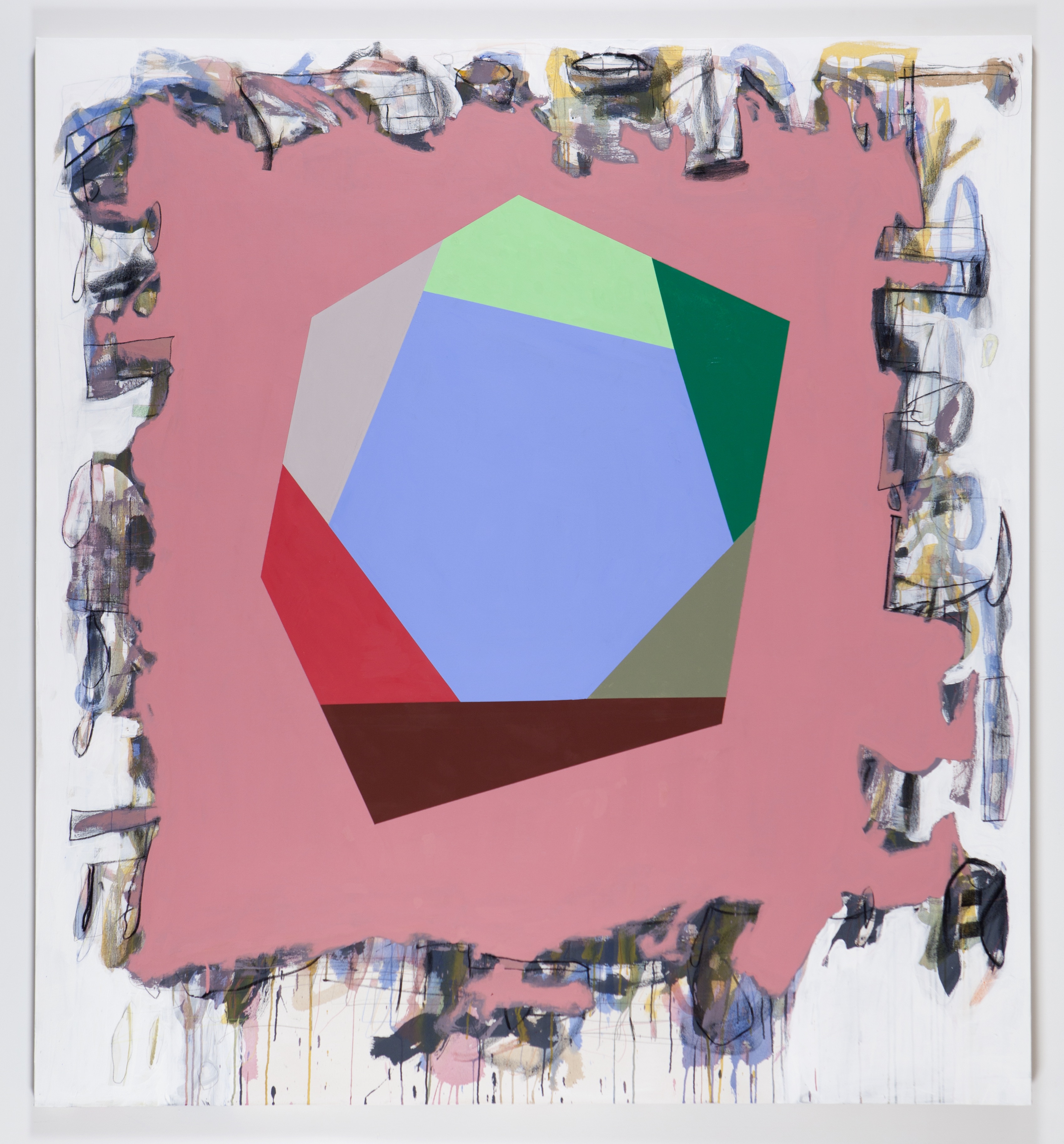 If the project of our lives is to integrate the many conflicting aspects of self into a coherent whole, and art is an extension of that process, it’s as though Plagens has resolved the tension between the Apollonian and the Dionysian by just sticking them both in a room together and asking the viewer to deal with it. It is an approach that only someone comfortable in their own skin can pull off.

“There are no more major moves I could make that would affect my career.

“I got to play out the hand I’ve dealt myself and I can’t change. I’m in this sort of groove.

“Painting ain’t the queen of the arts anymore, but I don’t feel martyred by that. I don’t ever want to get into the position where I sit back and say ‘ahhhh painting,’ yearning for some long-lost golden age of art.”

Has age liberated him then?

“If I take the ages at which my mother and father passed away and sort of split the difference I’ve got about seven-and-a-half years left.

“I titled a show in 2012 ‘I Don’t Give a Damn/Every Moment Counts’ which refers to this paradox where I’ve gotten to a point that, on one level, I no longer give a shit, but I’m also aware that time is running out.

“You’ve got to find out who you are,” Plagens says.

“Of course, you might find out you’re just a common mediocre type and then you’ve got to deal with that!”

Like I said, Plagens doesn’t beat around the bush.