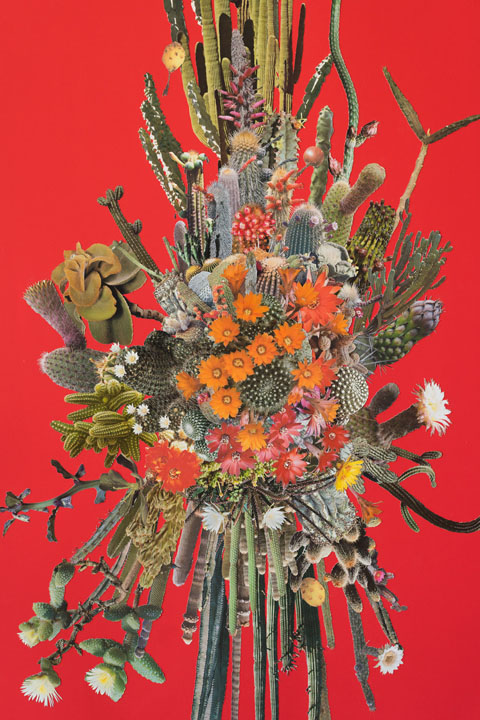 Stephen Eichhorn, “In the Garden I See” (detail), 2018, Collage on archival paper

Nods to the current geological epoch of the Anthropocene, in which, according to geologists, humans are the primary force of permanent planetary change, and that of Psychedelia, a cultural phenomenon during the early 1960s to the mid-1970s associated with the effects of psychedelic drugs in contemporary art aesthetics, create a dichotomy between groundbreaking creativity and extreme sociopolitical turbulence in this exhibition. Drawing on the latter’s popularization of boundary-pushing and the questioning of authority and subsequent moral unrest and social upheaval, Stephen Eichhorn’s “Ceaseless Wheel” is a transportive and liberating experience.

The artist’s debut solo show at Carrie Secrist invites reflection on aesthetic, environmental and ethical issues. New realities emerge as the viewer moves within the gallery space amid meticulously hand-cut collages of plants, mostly cacti and succulents. Eichhorn specializes in found imagery, but don’t expect anything from the pages of National Geographic. He is not intrigued by the photographs of the awe-inspiring beauty of natural wonders. Instead, he sources material from historical botany textbooks and similar publications to create unique habitats—ingenious and provocative. 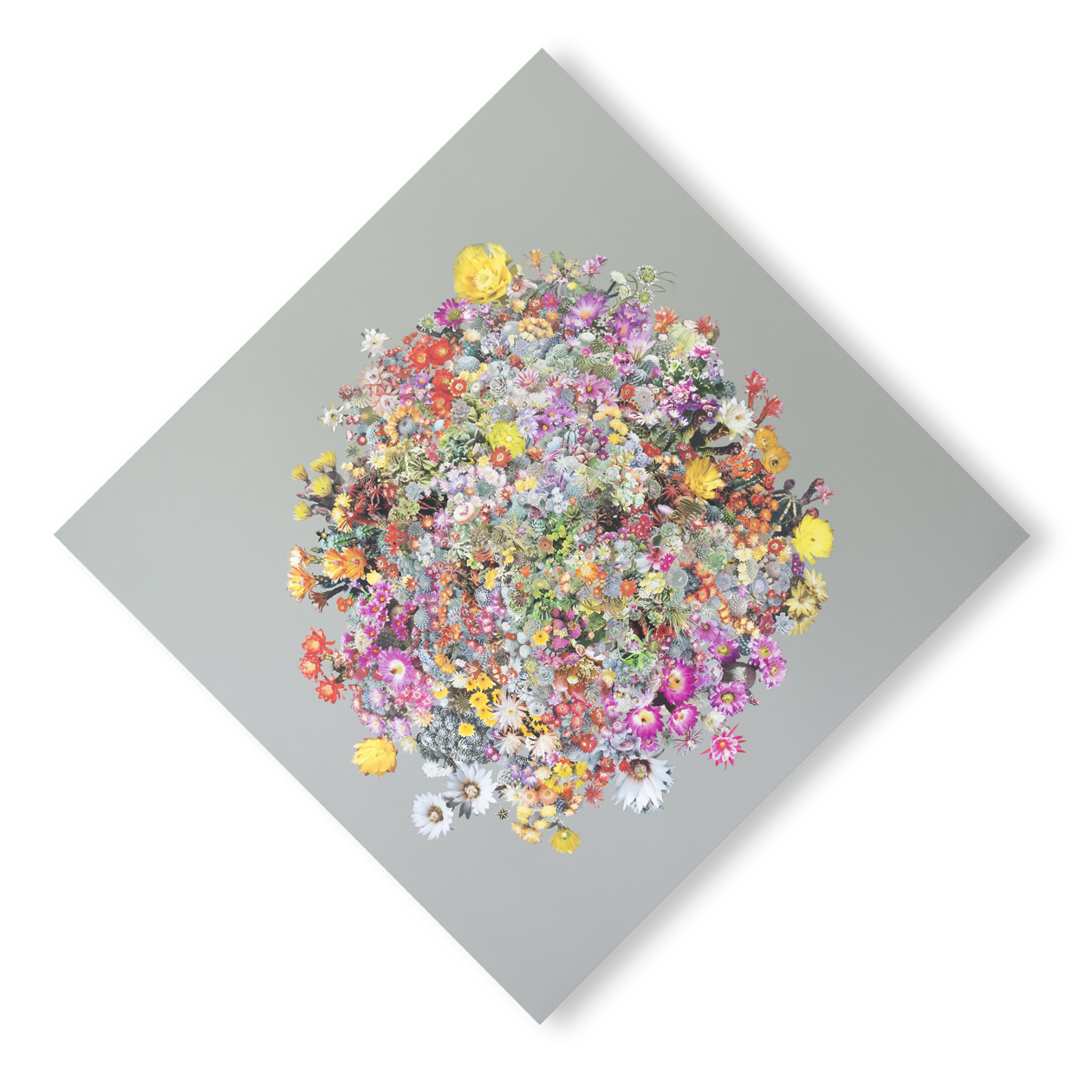 Eichhorn graduated from the School of the Art Institute of Chicago with a focus in sculpture—unsurprising considering the complicating dimensionality of the picture planes he creates by enhancing his futuristic floral hybrid forms within a dimension between an imaginary psychedelic universe and the natural world. Further highlighting the juxtaposition between the natural and the artificial, the leafy subject matter can be found in two forms throughout the exhibition: either arranged on acrylic-coated panels (often diamond-shaped) over matte black or gray surfaces; or, as works on archival paper, placed atop bright monochromatic backgrounds—yellows, oranges, blues and greens—highlighting even the tiniest geometric forms—arcs, holes, crescents and other more intricately cut confetti-sized paper plant parts.

Eichhorn’s work moves beyond highly elaborate floral collages and even gallery walls in the form of site-specific installations around the city, including the James Hotel and formerly the Damen Blue Line Station, part of a collaborative program between the city and Johalla Projects. His sculptural works include life-size collages of cats and plants—a wonderfully bizarre combination of felines hiding behind foliage (and sometimes shells or minerals) or balancing houseplants on their furry heads—a still life of sorts. 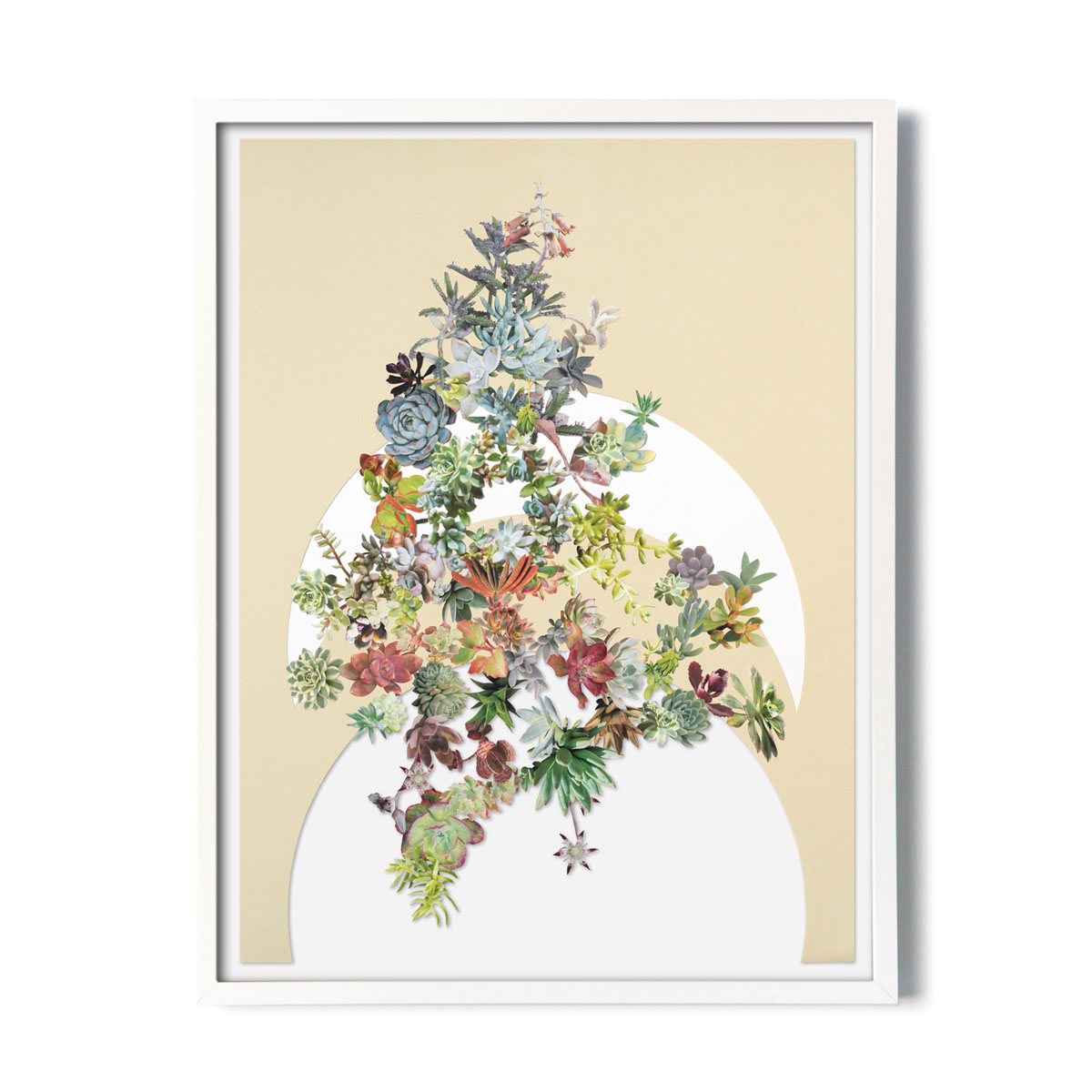 Naturally, cats and plants, undoubtedly two of the internet’s favorite things, became widely successful on and offline. In May 2017, Eichhorn released his first monograph, featuring more than 200 images of cat collages—felines posing wearing plants, along with the occasional shell or mineral, as headdresses. Eichhorn will sign “Cats & Plants” (Zioxla Publishing), in its second edition, on Saturday, December 1 at Carrie Secrist Gallery following an artist talk conducted by Adrian Wong. After experiencing his work as a whole, viewers will find themselves unlocking new experiential dimensions, gaining insight into Eichhorn’s wondrous world between flora and fauna, reality and the surreal. There, the Ceaseless Wheel never stops turning, proving that the little things often make a big difference. (Vasia Rigou)

Stephen Eichhorn’s “Ceaseless Wheel” shows through December 22 at Carrie Secrist Gallery, 35 West Washington. There will be an artist talk and book signing Saturday, December 1 at 1pm.