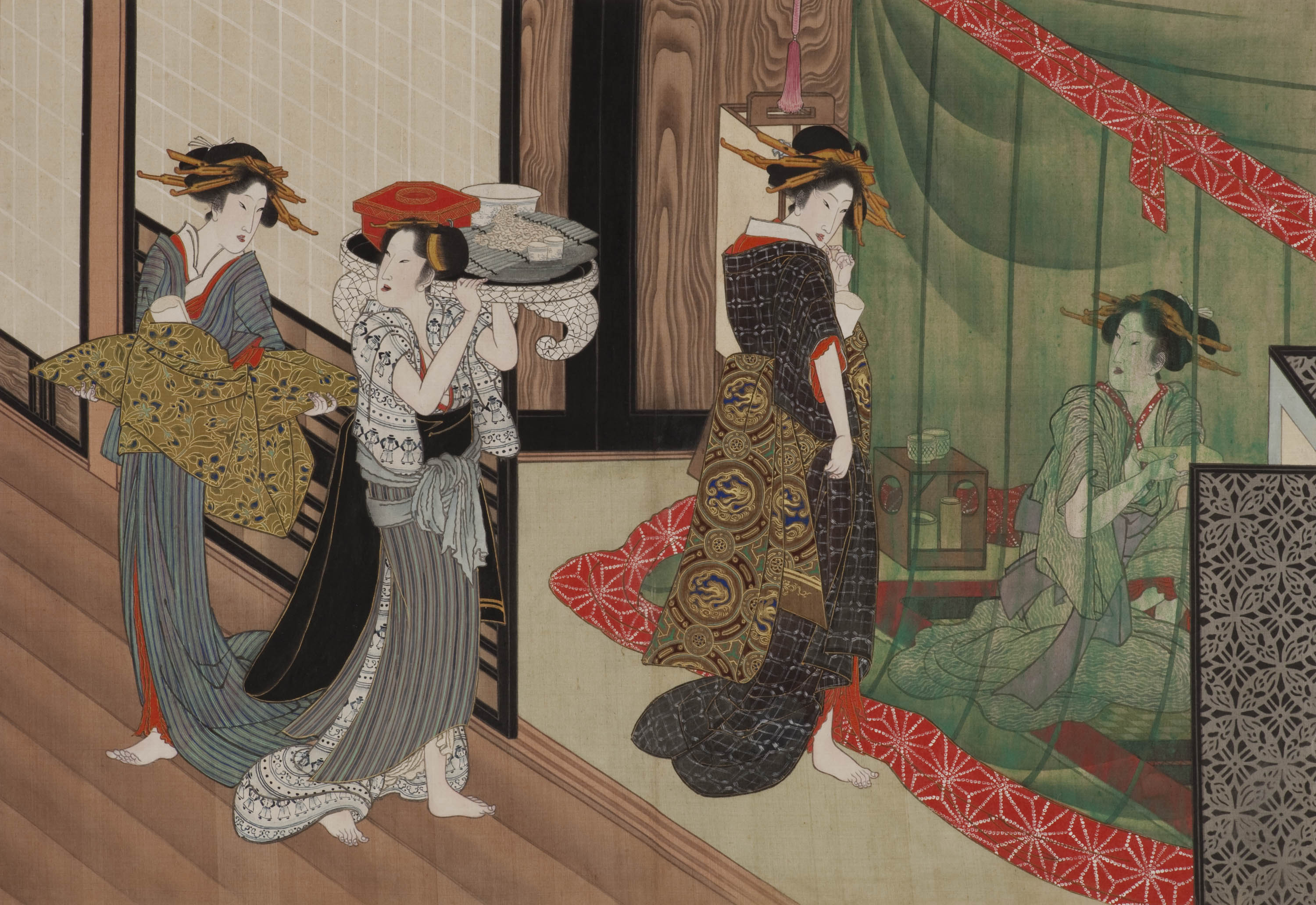 Utagawa Toyokuni, A painting from “One Hundred Looks of Various Women,” 1816. Weston Collection.

What would Modern Art have looked like without Ukiyo-e? Japanese prints were collected by Monet, Degas, Gauguin and Picasso. Like their own work, Ukiyo-e was more about urban sophistication than moral, spiritual or political themes. This exhibit includes familiar Ukiyo-e masters, but is comprised entirely of paintings rather than prints. Instead of hard-edged lines cut into wood by skilled artisans, it was the artists themselves who pulled soft brushes over the absorbent surfaces of silk or paper. Instead of bold, disruptive designs meant to capture the attention of browsers at a print shop, these scrolls appear to have been commissioned to proclaim the status and refined taste of an elite clientele. And in contrast to the spontaneous brush strokes of avant-garde Europeans, the intense perfection of Ukiyo-e painting is much closer to Beaux Arts academics like Vibert or Bouguereau. It’s not likely that Vincent Van Gogh had this kind of work in mind when he wrote to his brother, Theo: “All my work is based to some extent on Japanese art.”

My favorite piece in this show is the earliest, a six-panel screen depicting “Female Dancers with Fans” (1624-45, artist unknown). Reminiscent of an earlier, medieval era of Japanese art, it echoes an aristocratic, courtly world rather than a high-end brothel district. The dancers have been drawn into a gold-leafed background with solemn joy, almost like the portraits of saints in a Christian cathedral. About thirty years later, however, “A Woman Dancing with a Fan” (1661-73, artist unknown) depicts a dancing courtesan as if she were an entree on a full-color menu. The clothing is flashier and the shapes jump off the surface, rather than rhythmically moving across the visual field (coincidentally, something like a brothel catalog called “Models for Fashion” (1777) is currently on display in the Buckingham print gallery).

Like many exhibitions at the Art Institute, every piece in this show comes from one person’s private collection. A team of experts did not borrow pieces from museums around the world with some scholarly intent. Being secular as well as irrelevant to European Modernism, Ukiyo-e painting has been of little interest to American collectors and scholars. So this is the first exhibit of its kind at the Art Institute of Chicago. Perhaps only a wealthy and persistent collector like Roger Weston, who is also on the museum board of trustees, could have pulled it off. He has focused on the Bijin-ga (pictures of beautiful women) from the Edo period (1603-1868). Other subjects of Ukiyo-e such as landscapes, Kabuki actors and flora or fauna are nearly or entirely absent. Yet within his chosen scope, there is sufficient breadth to prompt reflection on the rise and fall of the Tokugawa Shogunate, the military dictatorship that pacified Japan while transforming its capital, Edo, from a remote fishing village into one the world’s great cities, Tokyo. The dreamy, chaste idealism of Furuyama Moroshige (1678-1698) was followed by the comfortable glamour of Miyagawa Choshun (1682-1752) followed by the severe elegance of Katsukawa Shuncho (1781-1801) followed by the restive decadence of Keisai Eisen (1791-1848). The genre culminated with the blurry nostalgia of Tsukioka Yoshitoshi (1839-1892).

There is also sufficient depth in this huge exhibit to speculate on the careers of specific artists and schools. There are many works by the most prolific school of Ukiyo-e, the Utagawa. An entire room has been filled with “One Hundred Looks of Various Women” by Utagawa Toyokuni, more than half of whom, by the way, are sex workers. Another room has been filled with a similar “A Guide to the Ways of Women” by Utagawa Kuninaga. What is especially remarkable about that series is the page of calligraphy that accompanies each painting. Even without being able to read the script, you can still feel how each graphic style expresses either a streetwalker, courtesan, princess or dancer. There is also an opportunity to compare the Bijin-ga of the Edo artists with the less glamorous and more quirky Kamigata culture of Kyoto and Osaka.

There is not much female flesh on display in all this Bijin-ga. Nor is there individuality in the faces of the young women. As with dolls, greater emphasis has been placed on ornate costuming, with no sense of gravity or drama. Surprising in the presentation of so many sex workers, there is also no overt sexuality. The women might just as well have been hostesses at a fine restaurant. But this exhibit also includes that explicit display of copulation called “Shunga.”

Almost every Japanese painter of Bijin-ga also depicted Shunga, but you would never guess it from the exhibitions and collections of American art museums. The Art Institute of Chicago has 277 prints by Utamaro and 454 by Hokusai, but not even one example of their Shunga. The 2013 “Arts of the Bedchamber” exhibit at the Honolulu Museum of Art seems to have been the first time this genre was given a special exhibit by an American art museum. The four scrolls now on display in the Roger Weston collection appear to be the first time the genre has ever been shown at the Art Institute of Chicago.

Sex can also be humorous, easily undermining the universal human quest for dignity and respect. Thus Chobunsai Eishi has given us “Love Scenes Featuring the Six Immortal Poets” (1804-18) wherein aging luminaries of ancient Heian poetry straddle the sprawling white legs of Yoshiwara courtesans. One of the most famous ninth-century poets was a woman, Ono No Komachi, so she had to be content to pleasure herself with a dildo. A similar attitude of humorous disrespect for classical culture is found in the “The Three Vinegar Tasters” (1816), the piece selected by the Art Institute to promote the entire exhibition. A Taoist parable that originally involved historic artist/scholar/magistrates of eleventh-century China is here parodied with Yoshiwara courtesans and geishas. Why debate Confucian, Buddhist and Taoist philosophies when a pretty girl is eager to service you?

There many other references to serious poetry and classical learning throughout the exhibition, but the point always seems to be that we should satisfy the cravings of the moment—for which, of course, great learning is usually not required. That points to the limitations of a genre that celebrates a world where one gender is trained and paid to pleasure the other. Instead of honesty, loyalty, compassion, courage and all the other character virtues of the true lover, we just have conformity to established standards of appearance and behavior. The gender politics are as ugly as the paintings are beautiful.

This exhibition is only temporary, and perhaps that’s appropriate for an art that celebrates the transitory. The work presents a rather a shallow view of human life, and usually feels more conventional than inventive. Yet still, it feels remarkably bright and fresh, and the craftsmanship can be breathtaking. Curiously, some of the least impressive work was done by two of the most celebrated names in printmaking, Utamaro and Hokusai. Apparently, their kind of creativity was not a good fit with this genre. But no one who loves their prints should miss this groundbreaking exhibition that reveals so much about the world of Ukiyo-e. (Chris Miller)

“Painting the Floating World: Ukiyo-e Masterpieces from the Weston Collection” shows through January 27, 2019 at the Art Institute of Chicago, 111 South Michigan.