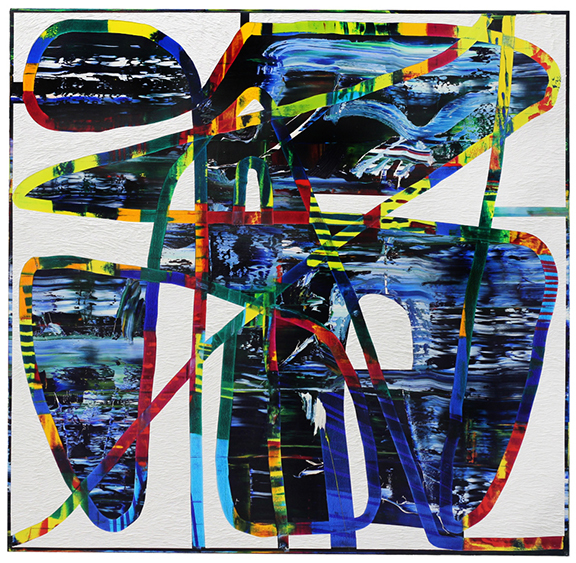 Is painting “the wrong medium at the wrong time” to reflect “the electronic, multichannel, virtually real world,” as art critic Waldemar Januszczak suggested in 1997?

Recent paintings of Ben Tinsley might refute that statement. The works are in an established modern tradition of applying various thicknesses of oil paint to large, rectangular canvases, six-feet-to-eight-feet wide. But rather than expressing how the artist feels about paint, himself or his environs, they seem to depict the dynamics of cognition based upon an expanding network of comprehension. As such, they might visualize the internet environment where there is no single reality, but a myriad of proliferating networks of like-minded people enmeshed within their own languages and ideologies.

His paintings depict such networks with flat, seething lattices of ribbon-like strips. Between them is the great void of nothingness—rendered here with areas of thick, uniformly textured and colored paint, white like sand or blue like the ocean. Within each strip, all sorts of wondrous, colorful and exciting things can happen. 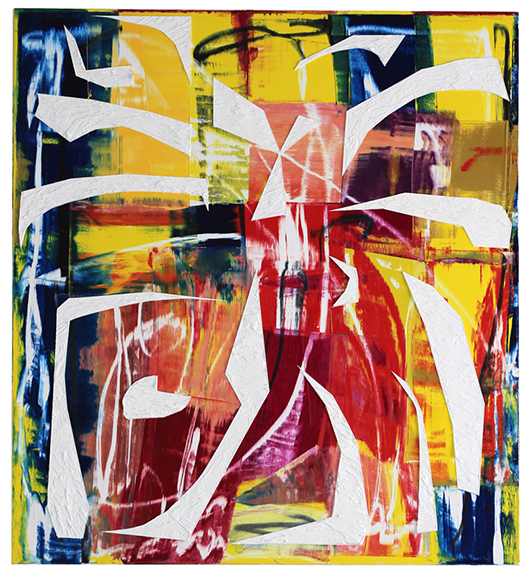 Tinsley is a resourceful technician, brushing, staining or troweling paint into eye-catching effects. He also likes to reconfigure his compositional elements from one painting to the next. In “Cry Wolf,” the strips are mostly parallel; a few appear to have been violently bent and forced apart. In “Simon Says,” the strips swirl in a circular motion. In ”Daisy,” the thick, white voids behind the strips have been cut out and pasted in front of them. In “Butterfly,” it’s the colorful space within the strips that has swollen into a dominating pattern, not unlike the shape of the insect wings suggested by the title.

If this process, as well as the titles, suggest child’s play, the artist explains that as a stay-at-home dad, he “tried to absorb and harness the idea of fantasy, imagination and wonder” from his two-year-old daughter. Children build cognitive networks to navigate their world, just as groups of adults build competing ideological networks in cyberspace. 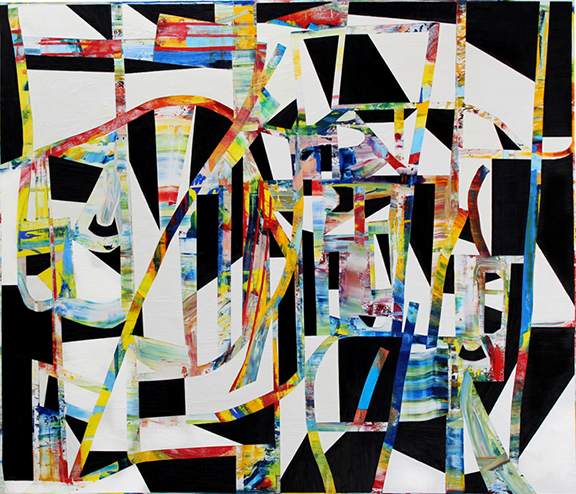 The evident craftsmanship in Tinsley’s paintings is hardly childlike. The work is packed with visual energy and excruciatingly fine details. But how long can its high volume be endured? I can share a room with two-year-olds no longer than I can browse a conspiracy website. The only piece I could really live with is titled “Marco Polo”; I remain astonished by how the multiple layers of patterns have the thrilling momentum of a graffiti-covered railroad car rushing past.

What kind of painting will Tinsley do next? Earlier in his career, he created one of the best Chicago cityscapes I’ve ever seen. One hopes he will return to calm, quiet and adult reflections on our brick and mortar reality. (Chris Miller)