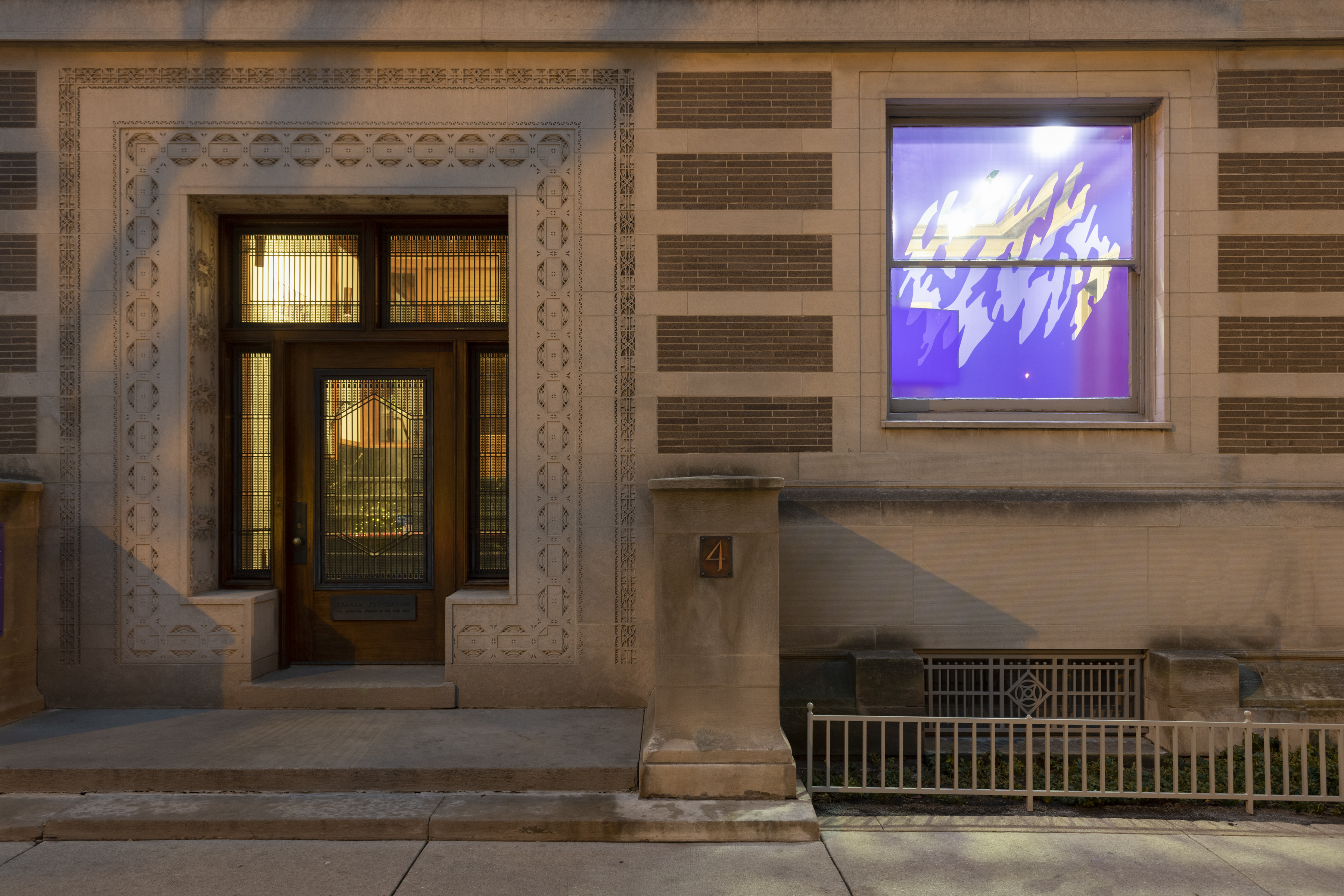 We are engulfed in the color purple—the wall, pattern filters on the windows, and sitting armature are imbued in it, the double-sided television glows with it. We are transformed into a space where we are made aware of our body by the omnipresence of technology. We think about purple, black womanhood, Alice Walker’s novel and the three cities that Syms’ video narrative is set in: Los Angeles, California; St. Louis, Missouri and Clarksdale, Mississippi. The video, which shares its title with the exhibition, on three televisions and with a surveillance camera attached to the ceiling above it, is cued to encourage us to explore the gallery. This editorial mechanism shifts the perspective of the typically passive audience for video-based works into an exploratory one. Through cues laden in the video, the characters, Queen and Girl, the latter of whom is the protagonist, are introduced. Mrs. Queen Esther Burnette White wears purple on a purple-clad stage and lectures us on self-presentation and power. Her method of oration is inspired by Motown Record’s Artist Development finishing instructor Maxine Powell and Amy Cuddy, a social psychologist who became well known through her TED talks. I remember one of Queen’s phrases that stuck with me—paraphrasing: “You have a power attached to your name, you must live up to it.” We watch, some as interlocutors and others as voyeurs, and learn about Girl’s life. She is a traveling nurse who navigates her relationship with family, friends and flirtation with a character, introduced over text message as “White Boy.” We watch as they text about their plans to meet up later. The shifting address of audience, where Girl is speaking to us directly, over dinner at a restaurant, doing karaoke, and reading us a book, draws the audience in intimately, as if we have been friends for a long time. At other times, the audience surveys Girl, watching her in the nude, relaxing and getting ready for the day. As we watch, Syms cues us in on our personal performance of moving through the space. The role of surveillance is not static but one that constantly shifts through different apparatuses, ultimately reminding us that surveillance is all about vantage points. Syms makes us feel like we are at the karaoke party, suggesting how optics of surveillance shapes digital participation and can also produce FOMO. The narrative of Girl and Queen is created in collaboration with the viewer and continues upstairs at the Madlener House. 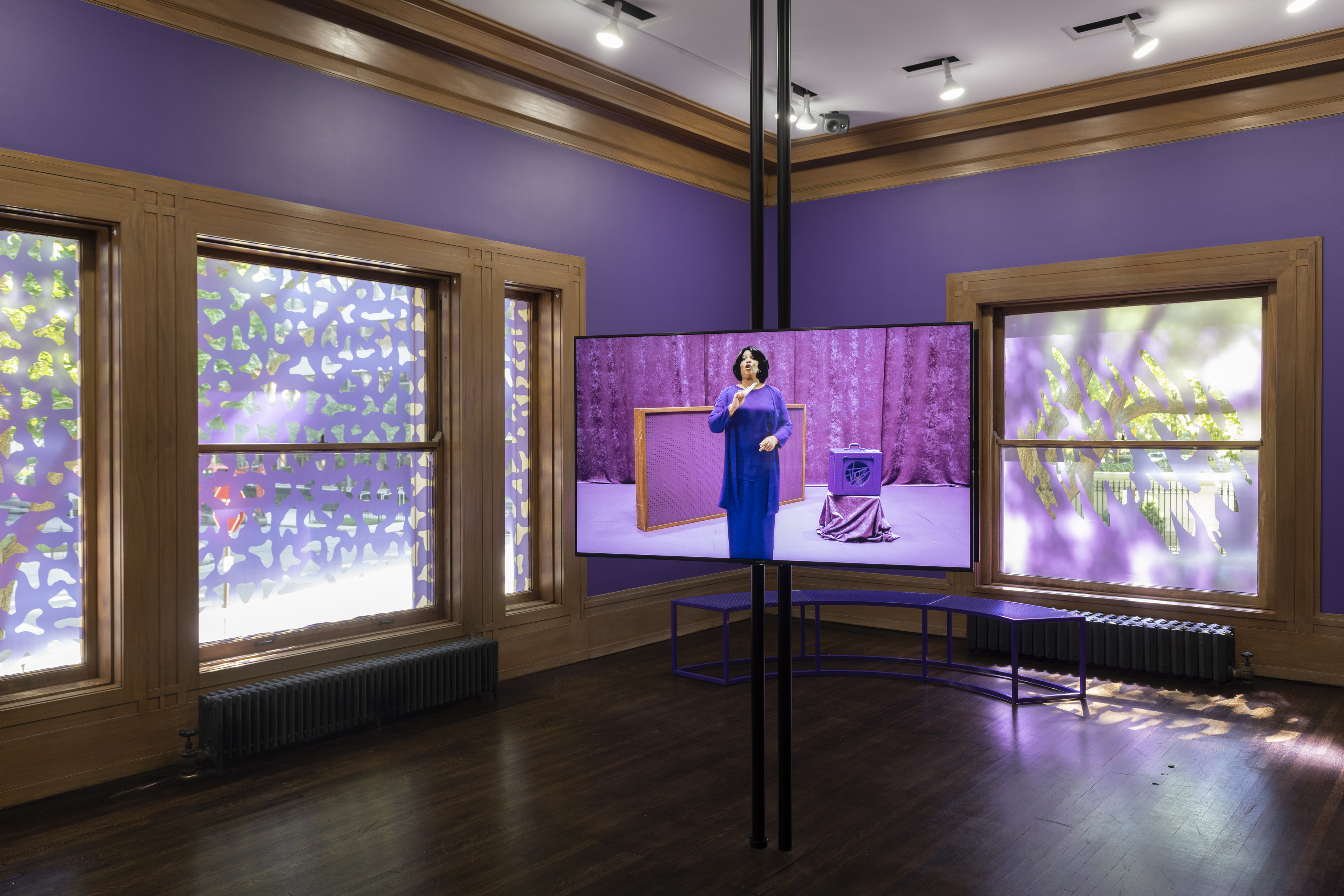 Upstairs, a wall-scale text painting, “GIRRRLGIRLLLGGGIRLGIIIRL” (2017), the main protagonist’s name is written in purple, referring to the vernacular greeting, the character’s name and also, cleverly, IRL (“In Real Life”) as the second floor extends the narrative of the exhibition into an Augmented Reality web application titled “wyd rn?” The text painting frames the twelve collages made of vintage movie posters for African-American audiences. Syms’ app, “wyd rn?” is an acronym for “what are you doing right now?”—it was developed by Brent David Freaney at Special—Offer. As one scans the movie-poster collages through the app, a digital layer of gifs, text or images appears. For example, when an image of Girl is scanned, a poster for the karaoke party and an iPhone interface of attendees’ song selections appear. Syms’ exploration of intergenerational blackness, womanhood, and the role of surveillance are expounded on by black studies and digital media scholar Safiya Umoja Noble’s book “Algorithms of Oppression” (2018), in which she examines the pivotal role algorithms play in imaging black girls and women. Noble found that search engines where the words “black girl” were input generated higher results for porn sites, legitimating biased, dehumanizing data sets. In the exhibition, Syms creates a narrative that makes us aware of the comportment of our bodies to the space and people around us, paying close attention to black womanhood. (Hiba Ali)