Now in its second year, Eclipsing is a collaborative, multimedia festival for artists inspired by self-defined interpretations of darkness. Its 2019 iteration, “Eclipsing: Death & Transformation,” aims to create space “for LGBTQIA+ artists and performers, namely trans, gender non-conforming & queer people of color, to cross boundaries between mediums, and to mobilize and harness darkness’ metaphorical and metaphysical qualities, creating space for reckoning and collective healing.” Newcity spoke with festival curator and organizer Amina Ross about this year’s programming, which runs through February 4, converging around 2019’s first lunar eclipse.

Eclipsing is a multimedia, multi-platform festival that holds space for artists of color, specifically queer artists of color, to explore darkness in its many forms. That darkness functions as a prompt and as a lens for artists to explore topics that range from trauma to issues around identity to metaphysical concepts. A big aim for me in the festival is allowing darkness to be freed from a binary, negative interpretation, oftentimes seen in opposition to light. So really allowing for deep dives into what could darkness be beyond just solely a negative thing. 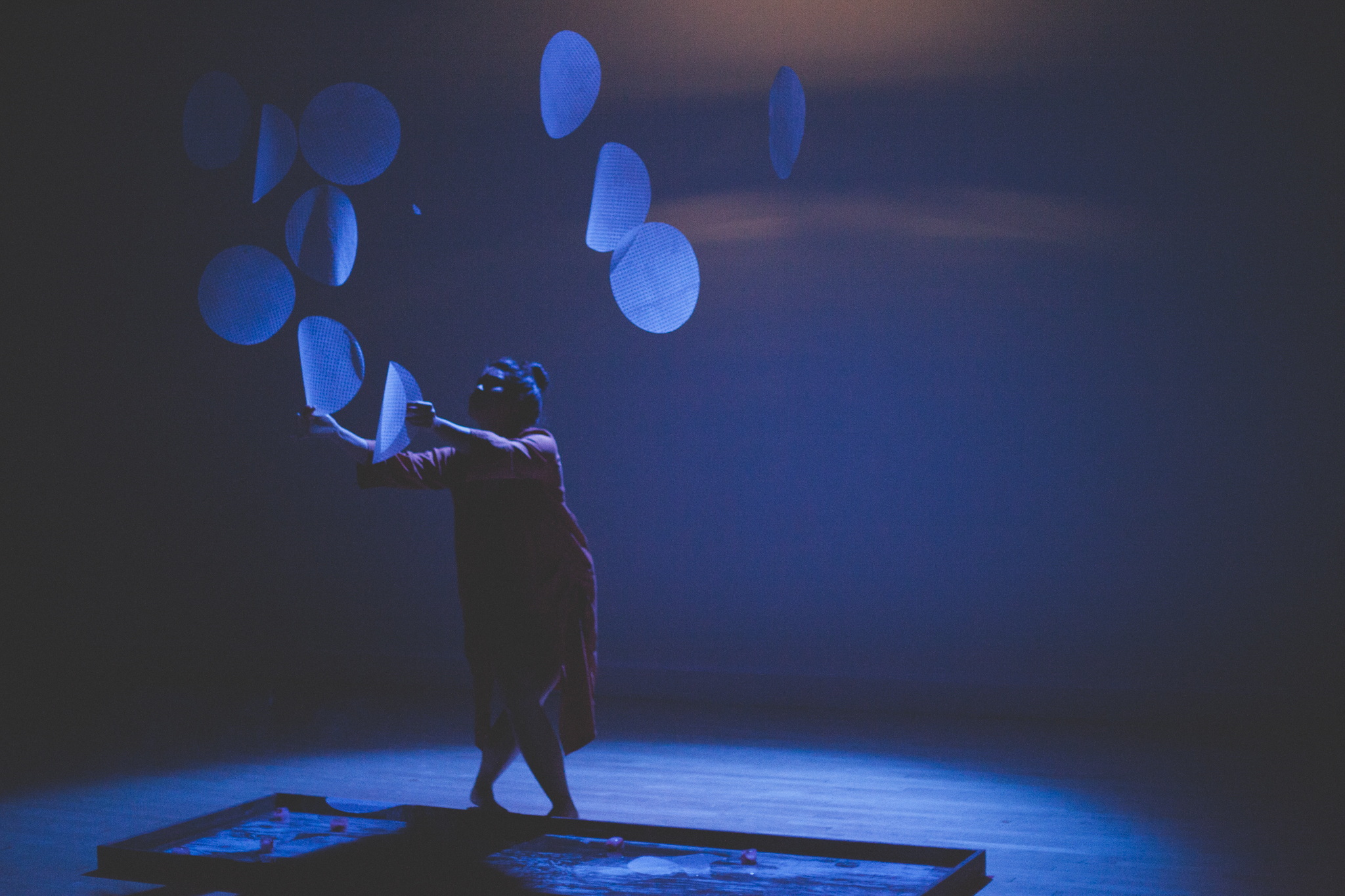 What was the catalyst for Eclipsing?

I made a piece of video work—I’m an artist myself—so I tried to perform an eclipse. I was inspired by the definition of eclipse. I’m always in awe of the stars and planets around me. Their movements are really inspiring, as someone who’s interested in movement and the world. But then looking to what the word eclipse, specifically what “to eclipse” means in the English language, to eclipse something or someone means to reduce them of their status or power. What’s embedded in that definition is to cast something into a space of darkness and to strip it of its power. In that one word, we find a lot of our assumptions about what it means to be dark, what it means to be in darkness or of darkness. Specifically in the English language, I would say in dominant culture, it’s to be cast out of power, cast out of sight, and to be cast out of importance.

I asked myself, “How can I perform this definition?” I created a video performance, and I was seeing artists who I felt were also using darkness and nighttime and space beyond visibility as praxis, and unpacking that. We’ve all probably heard the idea of giving visibility toward a cause or toward a marginalized group of people, this idea that if we’re more seen then that’s one route toward liberation. I was seeing artists who were exploring things beyond visibility—what is it if I work in the dark space, if I work in a space where my body is not exactly legible. I was seeing this in arts administrative practices, also in video work and sound work and performance. I saw a lot of overlap in my work and the work of my peers, so I wanted to hold space for all of these works to be in conversation with one another. 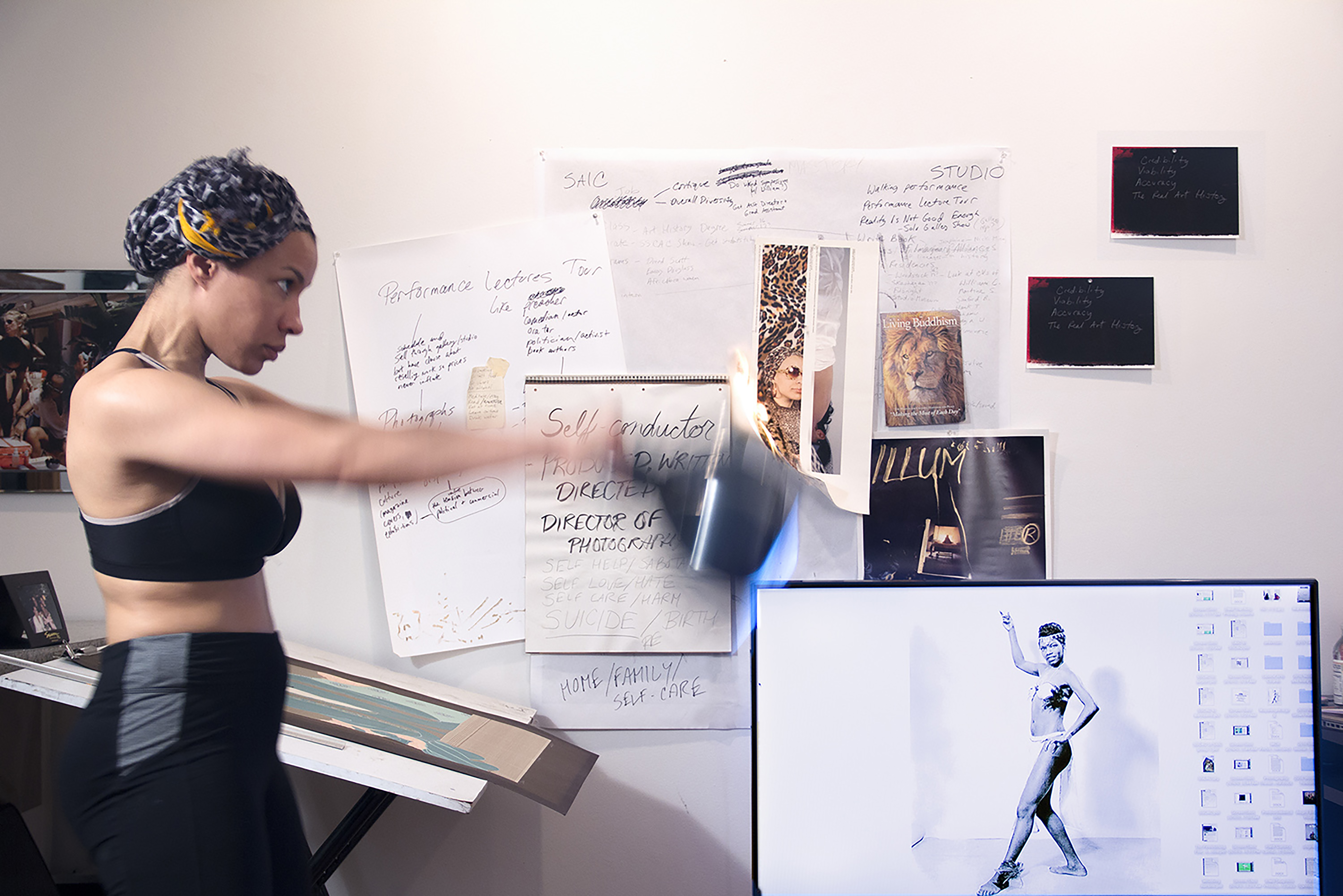 Rashayla Marie Brown will perform at Links Hall on January 31, 2019

I understand the programming has expanded since last year. What are some of the changes or additions?

At the heart of the festival are the performances at Links Hall. It’s a four-day performance festival. One thing that I really tried to do with this year’s festival is to have the artists who are part of the performance festival have different iterations of their work in other elements of the festival. I wanted to make some more parts of the artists’ mind and headspace visible and transparent to the audience. I am even reluctant to use the word audience because I really want it to feel more like a community, that you can sort of travel through these many events and that layers will be revealed to you over time. So you may not get a full snapshot of the festival by attending one day of the performances. You’ll get something rich and have a meaningful experience. But I think if you’re able to attend multiple parts, you really get the sort of richness of things.

Through my collaboration with Central Air Radio, with Jared Brown, who was part of the festival last year, we’re doing a series of interviews and experimental sound mixes that will be on the radio. Artists who are part of the Links Hall festival will have segments on there, so you can hear more about their practice, hear more about what they’re thinking about. It’s also functioning not only on air but also as part of an archive online, so people can access it after the festival.

We have opening and closing receptions that are clearly participatory. The opening reception is structured as a hybrid ritual and workshop. Informed by the themes of the festival and ways that people can participate, and talk with one another, and learn a little bit, from self-care to self-inquiry, practices that people can take with them throughout the festival and beyond the space. The closing is also a space to hold conversation and reflection that can be used again to sum up your time in the festival, but also plant some seeds of things for you to take after the festival.

Then at the MCA, there are two events happening as part of their “In Progress” series. Artists who are performing in the Links Hall portion are going to be showing different in-progress artworks. At the end, rather than having a Q&A, the artists ask the audience questions about what their experience of the work was like.

I’m excited to have people feel like they can contribute their voice and ask questions. I really like to change traditional—I mean I’m hesitant to use the word traditional—like the sort of Western theatrical history of performance, which is like stage and seats. I want people to be able to talk to each other, to feel like you can meet someone at this festival and collaborate with them. That’s my goal, to authentically connect people to one another. 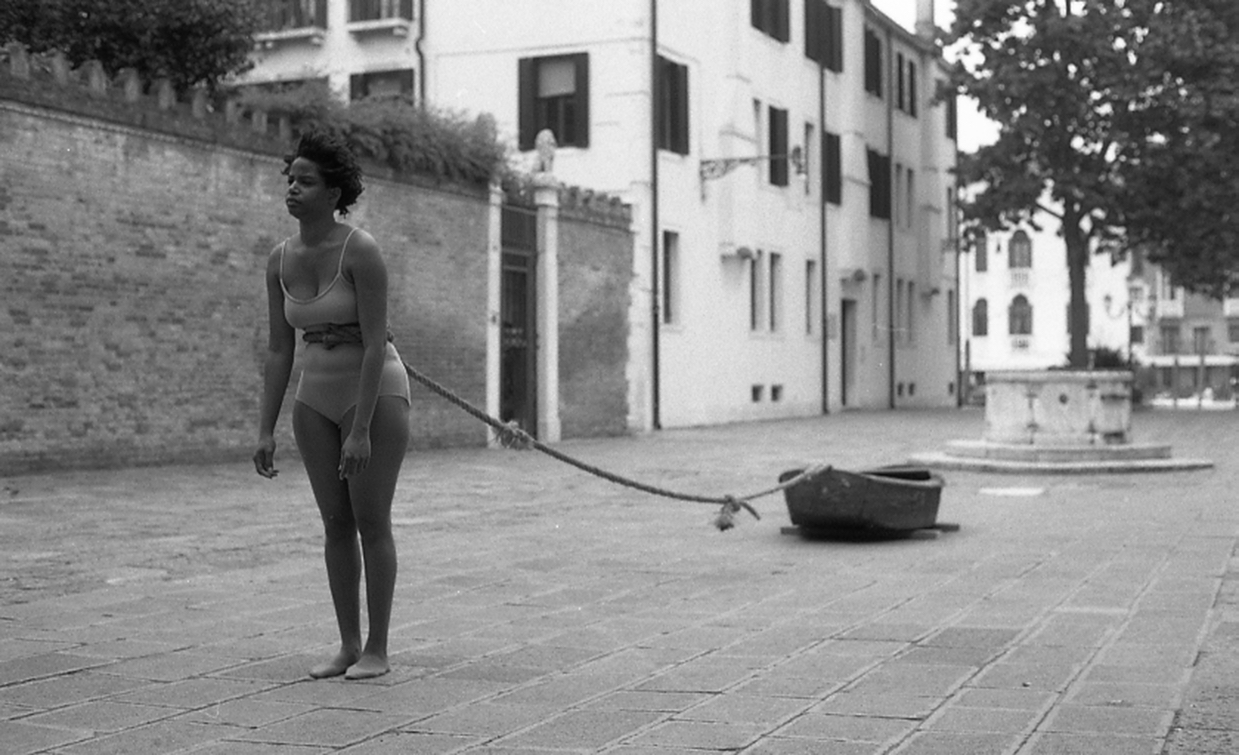 I move intuitively in that I am always researching. In terms of concept, it overlaps in my own interest in light and dark and video and sound work, and also the politics of language. I’m always looking at artwork and music and articles that are related to the concept, and then from that space of constantly being immersed in the material, I move and make decisions. It’s informal but it’s definitely a little intuitive. I’ve embraced that as a part of the practice.

In terms of choosing artists, I had a few people who really popped into my head as I was moving through the festival last year. With the first iteration of Eclipsing, I didn’t necessarily have a plan to do it again. It was potentially going to be a one-off. But as I was moving through and watching work I was like, “Oh, this other artists’ work feels in conversation with this, and they’re not a part of the festival.” So I was already creating a list of artists who I saw in direct conversation with artists from last year. Some of those folks, like Rashayla Marie Brown, Ashon Crawley, J’Sun Howard, Ariel Zetina, they were people whose work I had encountered and was really excited to bring into a larger conversation with artists from last year, to expand upon some of these themes. Then from there, I’m always really curious about artists who in many ways I consider my peers. And people throughout the festival would recommend people to me and look up their work. I’d make meetings with the artists to talk through what the festival was, what my work is, what their work is, and if it feels in alignment with where they’re at in their practice right now. Through that I developed relationships with Susana Pilar Delahante Matienzo, who’s a Cuba-based artist. I met her while she was in Chicago. We went to lunch, I talked to her about the festival. It seemed like a great fit. It’s really talking about the festival with others and seeing whose practice is in alignment. 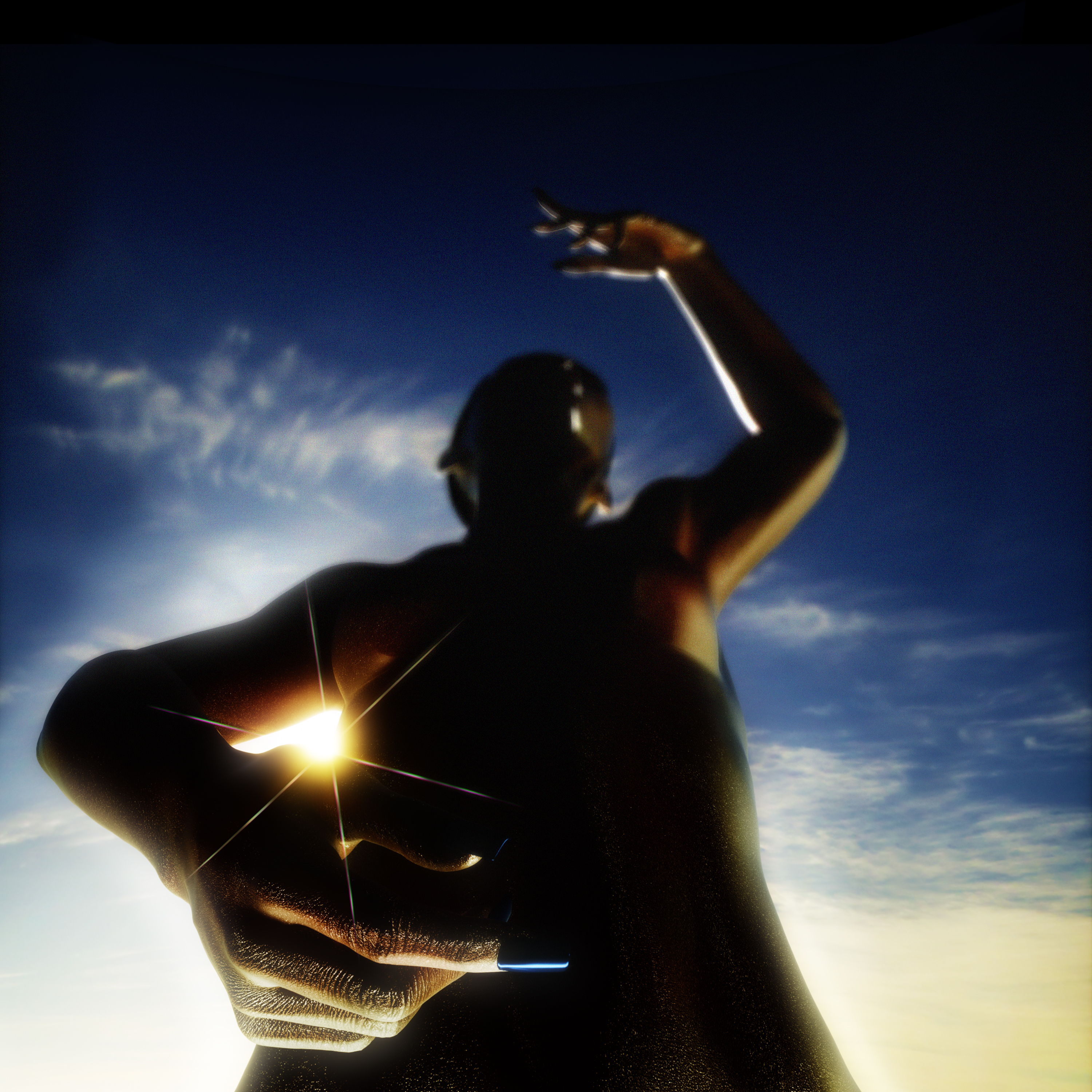 I saw that you have a twelve-hour screening at the Nightingale, are people intended to come and go?

Yes, yes, yes. I’m really excited about that one. Yes, it’s intended for people to come and go. That project at the Nightingale is also really exciting to me because it’s fully curated by Joelle Mercedes and Jory Drew. I’m working with them in the way that I work with artists, where oftentimes I’m here to provide support, here’s the conceptual framework I’m working with, I feel like your work intersects, what do you want to do and let’s make it happen. Both Joelle and Jory, who are practicing artists themselves, have a deep, deep passion for moving image. So they’re doing sort of an all-day-long performative lecture and reading interspersed with YouTube videos and full-length movies. Jory did something slightly similar to this format at Filmfront, and it was awesome. It was all on sort of the political implications of horror, and looking at the way a lot of our society’s fears and ideals manifest in horror movies. I was super inspired and excited by that, so I’m thinking that this will look somewhat similar but also wildly different from that. Just allowing a bunch of different mediums and platforms related to moving image to converge in one space. I’m really excited about that.

And then another piece that I’m really excited about, too—I mean, I’m excited about the whole thing—but Xitlalli Sixta Tarin is debuting a new work at Filmfront called “Best of Both Worlds.” It’s a video that she’s been working on that’s about the projections of desire on bodies of trans women sex workers and reclaiming the body through this indigenous folklore. It’s sort of projecting herself into this fantasy space where her desires are allowed a space to manifest, and transforming the gaze in that way. I’m really excited about that one. It’s brand new, so I haven’t seen that one—no one’s seen it.

Eclipsing continues through February 4 at Links Hall, 3111 North Western, with additional programs in other spaces. www.eclipsing.info