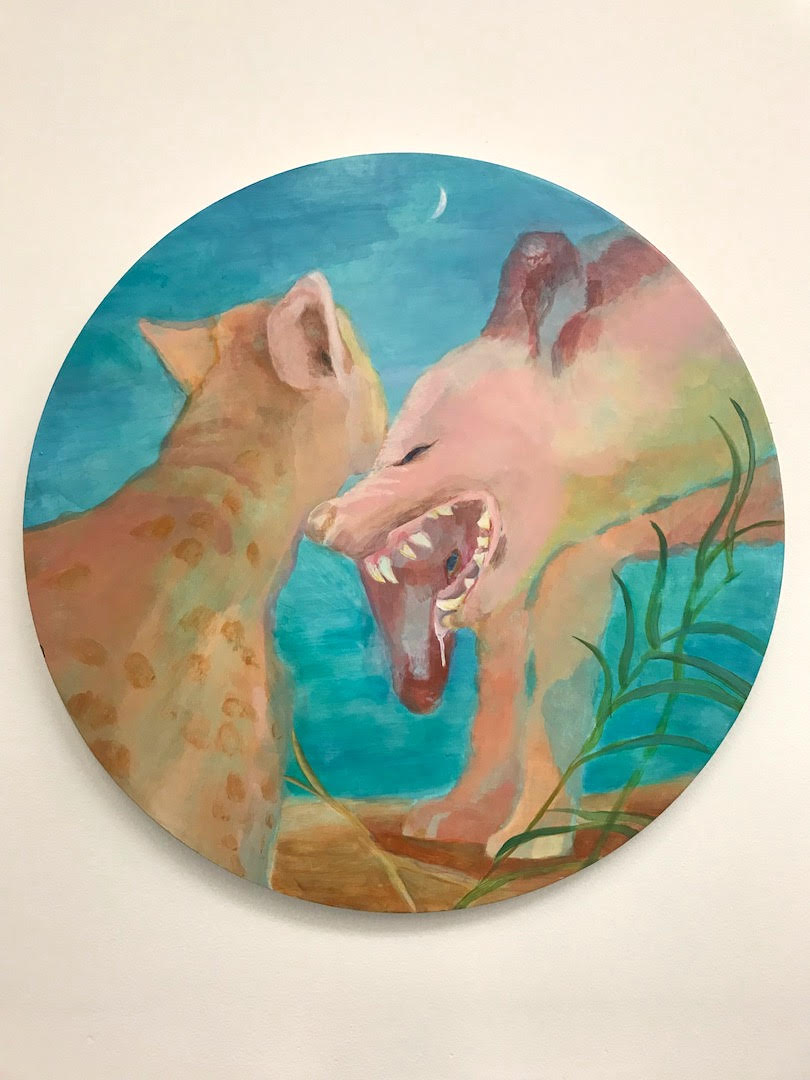 Minami Kobayashi’s show of small to medium-sized easel paintings takes a liberated approach to image, process and material. Leaning into the inherent ethereal effervescence of egg tempera paint, Kobayashi abandons the stodgy conventional approach predicated on tight draftsmanship and a methodical build-up of crosshatched lines. Instead, she builds color and form through veils of loose brushwork. Layering transparencies of color from warm to cool, and vice versa, her surfaces are amorphous. As they glow, they dissolve, adding to the dreamlike spontaneity of her idiosyncratic image juxtapositions. 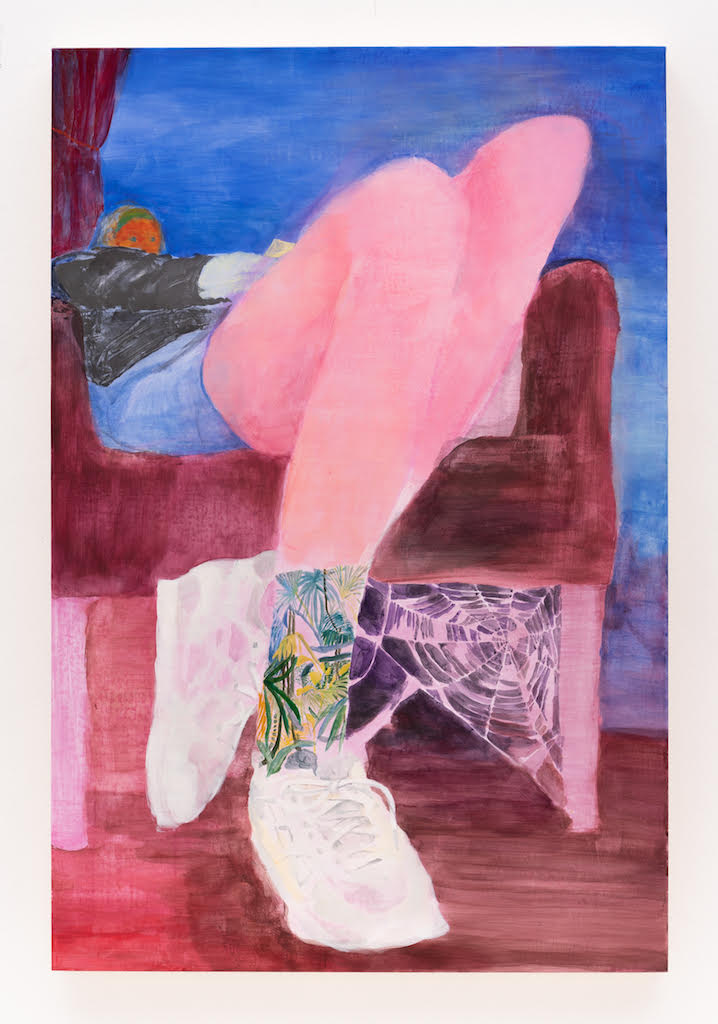 Kobayashi has an insouciant approach to both the figure and composition. Casual and confident, she crops figures abruptly, producing peculiar focal points. Occasionally the figure and ground flip-flop spatially as well, asking the viewer to reorient their perceptual understanding. Animals, such as dogs and butterflies, are often disproportionately larger than their human counterparts. In one small painting, a boy looks down at his chest at a large butterfly approaching, or resting, upon him. They don’t seem to co-exist pictorially and a clear narrative remains elusive, yet the image is gratifying to consider. The title, “Nocturnal Emission,” conjures the excruciatingly awkward psychology and titillation of uncontrolled pubescent sexuality. And the saturated red and green color scheme only amplifies these metaphoric associations with compelling visual tension. Throughout the show, this seems to be a consistent quality of Kobayashi’s paintings. She establishes brightly colored fugue states of dissociated moments that coalesce into charismatic amalgams that remain pointedly unresolved. 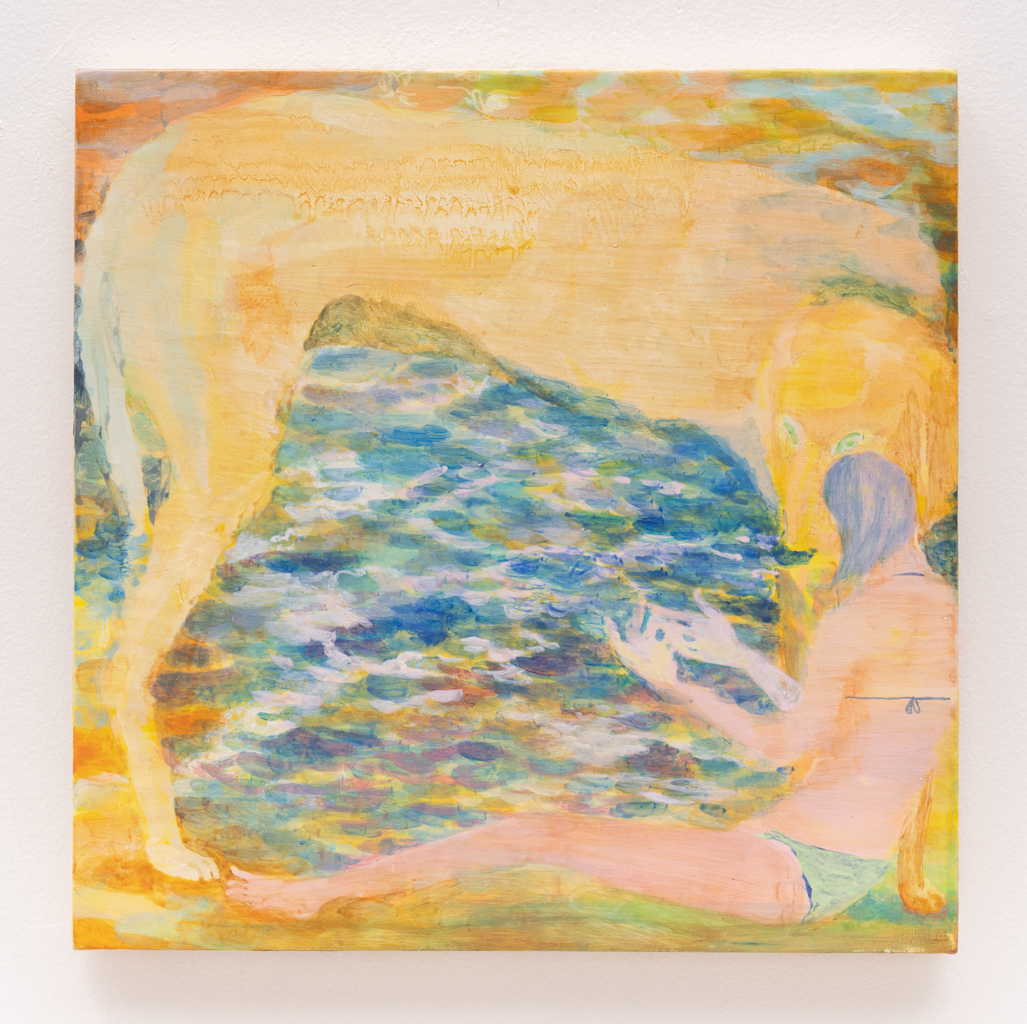 Kobayashi’s focus sways from the cursory to attentive. This is most evident in her larger pictures. In “Breakfast Meeting,” figures are described with a gratifying disinterest in anatomical credulity. The negative space in between the right figure’s leg simply switches color arbitrarily, while the horizontal line connecting the floor to the wall rises or falls at every intersection with a figurative element. Yet the small leafy green salad and banana placed in the center of the picture are succinctly rendered with thoughtful detail, giving them both specificity and volume. In “The Back Alley,” the pointy-eared man and a long-haired dog are less like figures with subjective presence and more like occasions to invest in abstract dynamics. The man’s leg cartoonishly bends, indicating he is sitting. But more importantly, its red color amplifies formal contrasts in tone and saturation throughout the picture, offering a diversion from the cool, pale color scheme. The dog’s fur, painted in languid vertical arabesque lines, contrasts with the blocky horizontal pattern of the grey brick wall surrounding it. These are compelling qualities, but Kobayashi really animates this painting with an exquisite array of skanky detritus at the bottom of the picture. A grey band of color, presumably a sidewalk, has depictions of crumpled beer cans, a squished toothpaste tube, cigarette butts and a used condom. These ornaments, both small and nasty, are pithy declarations of Kobayashi’s ability to paint with spontaneity, ingenuity and clunky grace.

“A Park at Lunar Surface” is a pleasurable and wonky exhibition. It is filled with visual koans, strange image riddles that tease the viewer into playful speculation about Kobayashi’s quixotic thought process and her burgeoning talent.