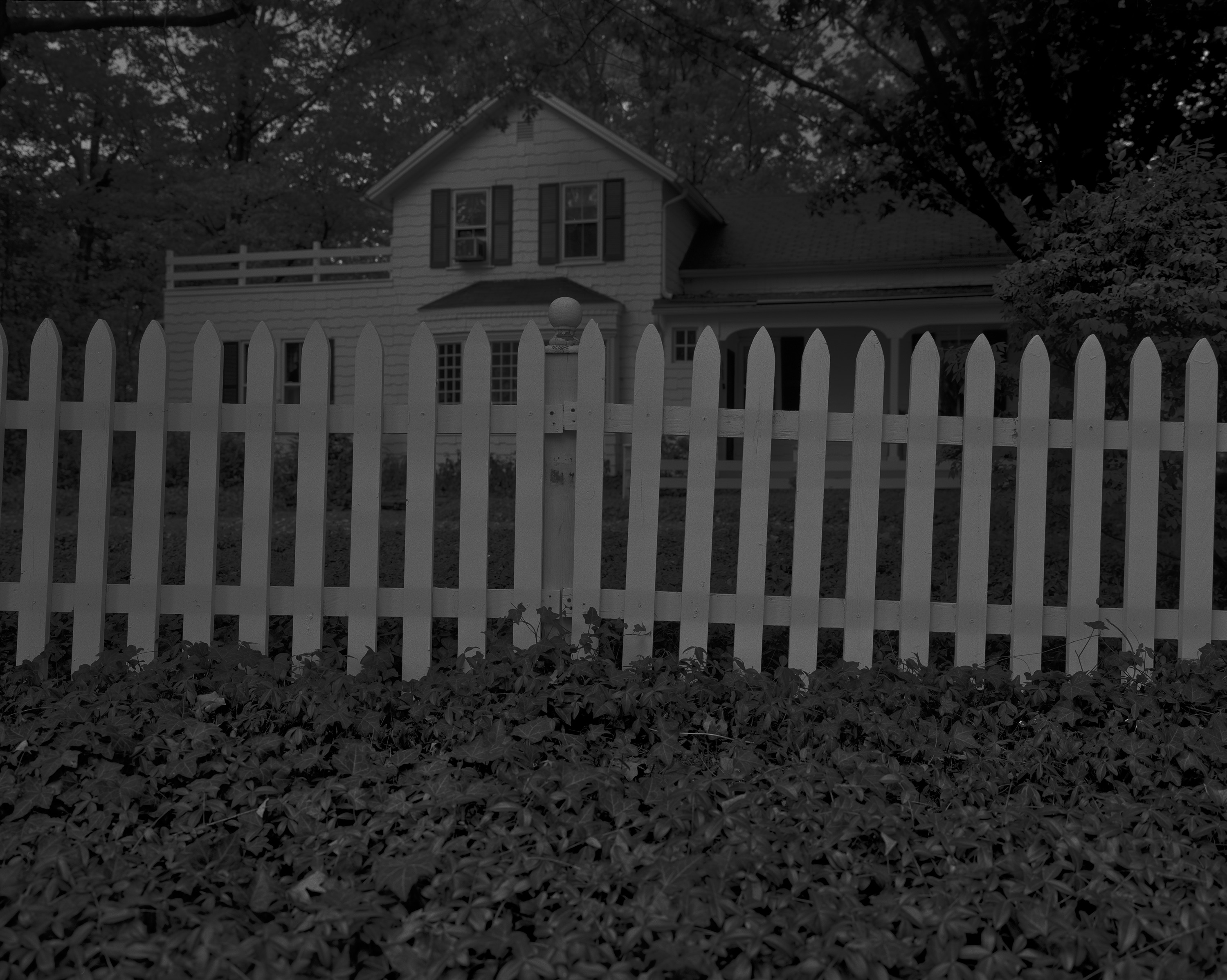 At a time when chaos is the world order and nothing is normal save for the shattering of norms, a record-breaking real estate transaction early this year went relatively unnoticed: $238 million paid for a penthouse overlooking New York’s Central Park, the most expensive residential sale in American history to date.  The buyer, hedge-fund owner Kenneth C. Griffin, has spent an estimated $700 million in all on homes and much more on contemporary art, $500 million alone on a de Kooning and a Pollock in 2016, the largest private art sale in history at the time, and a reassuring ripple in a downturned art market. Kindly, Griffin lent both paintings to be displayed for a stint in the Art Institute of Chicago’s Modern Wing, which Griffin himself put $19 million toward building in 2009, earning his name on the breathtaking atrium that vaults over the museum’s expansive collection of modern and contemporary art. 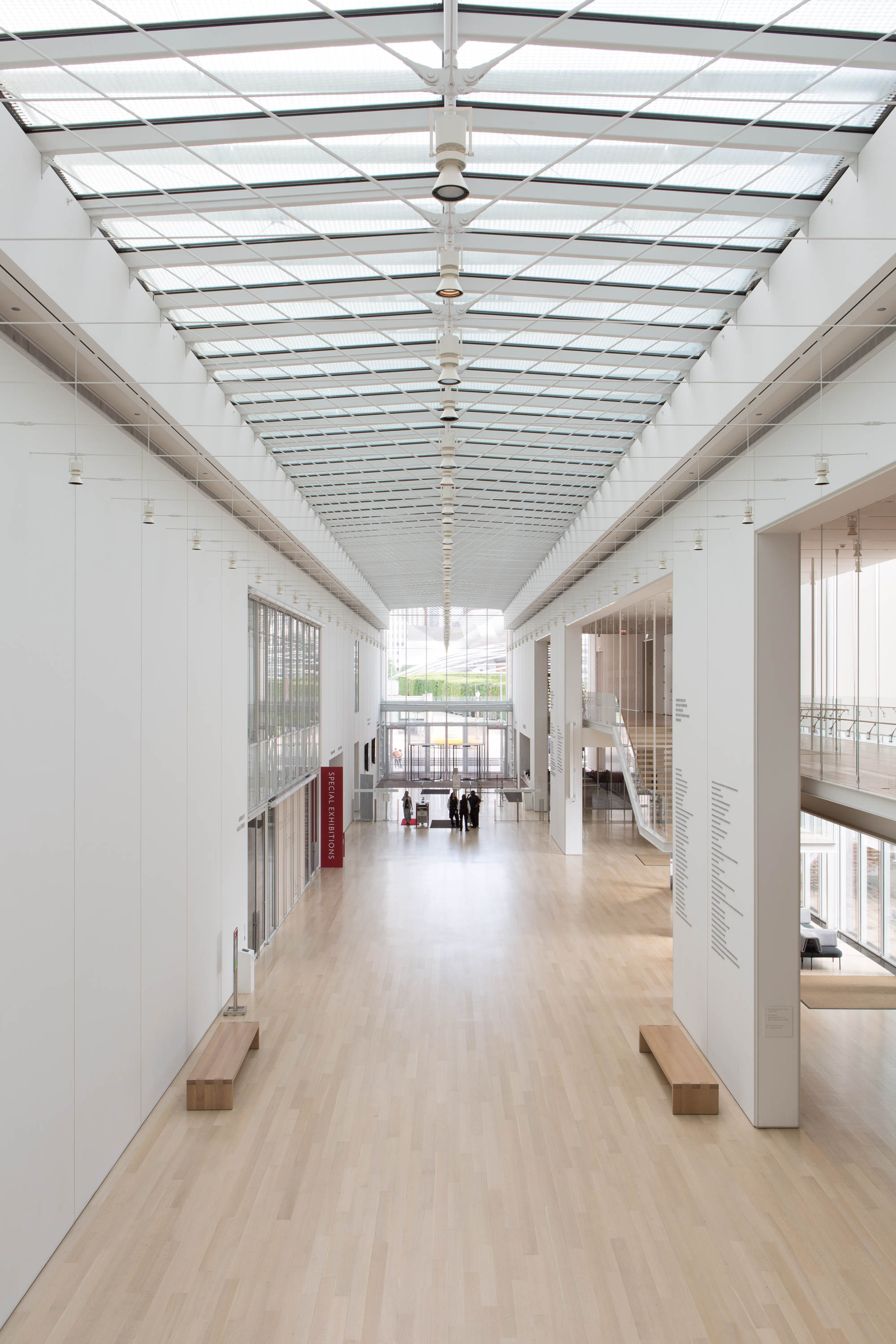 Now on display in a first-floor gallery in Griffin’s Modern Wing is a body of stunning new work by America’s preeminent photographer Dawoud Bey, its first museum showing since the artist made the photographs last summer for Cleveland’s inaugural FRONT Triennial. There, the work was displayed in a church, the cathedral of St. John the Evangelist, completed in 1852 and since then the seat of the Roman Catholic Diocese of Cleveland. In Chicago, the works get their due in the best photography gallery in the city, a contemporary cathedral to our secular icons with filtered light streaming in through glass walls and vaulted ceilings. But to appreciate the magnitude of this new series and how dramatic a departure it represents for Bey, it’s imperative to look back on his career of forty years, each chapter a groundbreaking development in the practice and history of contemporary photography. 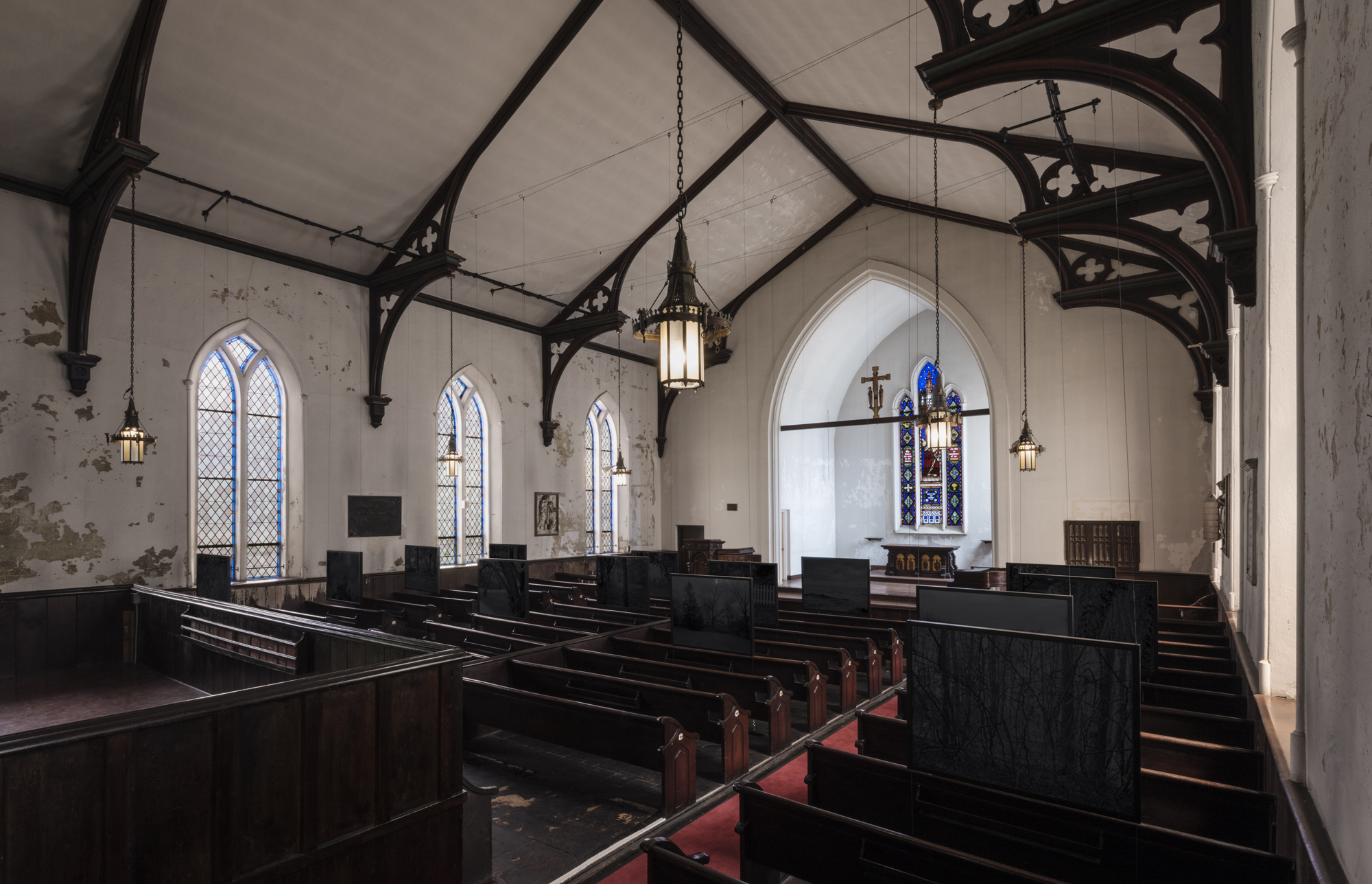 Fortunately, that task has been made substantially more fathomable by the recent release of “Dawoud Bey: Seeing Deeply,” a voluminous monograph with all the luxurious detail of a Phaidon-style tome and all the scholarly heft of a catalogue raisonné. Published by The University of Texas Press, the book combines brief scholarly essays by artist and photo-historian Deborah Willis, poetic musings by Hilton Als, reflections by Bey himself, and contributions by others, each considering a chapter in the work of the artist and followed by gorgeous, full-page reproductions of selected images. Chronologically, the reader is swept through Bey’s life’s work, beginning with his seminal “Harlem, U.S.A.” portraits, which establish the photographer’s central concern: the representation of black Americans as they are and as they see themselves. As Bey says, “I began to make photographs that had more to do with what I was seeing and experiencing in Harlem, and what the people I was photographing in Harlem were offering me rather than some preconceived notion about how I could put a positive visual spin on the black experience.” From the beginning, photography for Bey was a reciprocal process, a “civic act” or a “philosophy of negotiation,” writes Harvard art historian Sarah Lewis in her introduction. This tenet carries through demonstrably in his Polaroid street photos—Type 55, which peel apart into a positive and a negative, the former a gift to his subject and the later kept for Bey’s enlargements—and his subsequent large-format color Polaroid portraits. These have always been my favorite, both for their rich colors and the varied focal distances—each subject composed as more than a sum of their parts. For Bey, the move from the streets to the studio constituted not a departure from his central concern, but a deepening of his work in the dynamics of mutual subjectivity, seeing and being seen.

To that end, in 2001 Bey embarked on “The Chicago Project,” the start of a series of works called “Class Pictures,” in which he connected art institutions and high schools in America through residencies that culminated in portraits of students and recorded conversations about their sense of self and how they imagine others perceive them. In these works, reproduced in the book with excerpts from the students’ conversations, photography joins with the spoken word to convey the complexity of representation as a visual and emotional conversation with others and with oneself. From here, Bey firms up the conceptual structure of his later work. ”Strangers/Community” and “The Birmingham Project” each operate in a logic of pairs. The former brought together two strangers from a single community for a double portrait, capturing a fleeting moment conjured by the photographer. The latter, a somber meditation on the 1963 terrorist bombing of the Sixteenth Baptist Church in Birmingham, pairs portraits of young black people from Birmingham with community elders. The youths are the age of the four girls who were murdered in the blast, the adults are the age they would have attained if they had not been subjected to such unfathomable hatred and violence. Bey took the portraits individually, only matching them after all the photographs were made. Leigh Raiford has written insightfully on this project: “Together the sitters for ‘The Birmingham Project’ are simultaneously surrogates, mourners, witnesses, community, and agents of their own narratives. These subjects, then, are not symbols but flesh and bone.” I would add that together ”Strangers/Community” and “The Birmingham Project” constitute an important development in Bey’s photographic practice, foregrounding the artist’s agency not only as an image-maker but as an author of encounters and a historian. In this move, the reciprocity of Bey’s practice is not diminished but begins to encompass larger interlocutors: human experience and history itself. 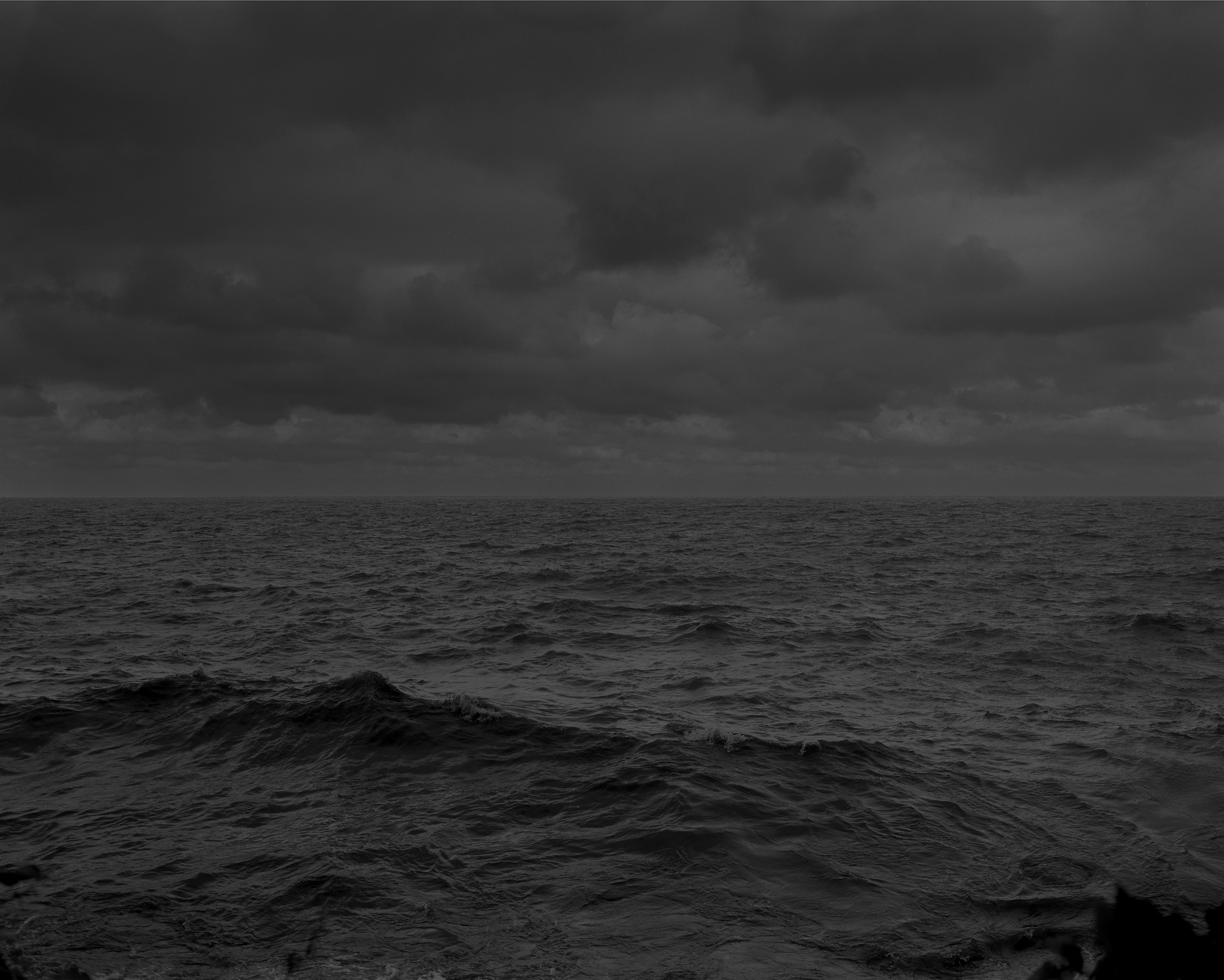 Enter “Night Coming Tenderly, Black.” Bey’s exhibition at the Art Institute marks his return to gelatin silver prints and a shift in his gaze from human portraits to the landscape around northern Ohio, a waystation for enslaved African Americans traveling along the Underground Railroad toward freedom in Canada. He photographs woods, a marsh, humble rural homes with picket fences, and the vast expanse of Lake Erie under the Midwestern sky. The rolling wave seems to gesture backward, and I am reminded of the Door of No Return on Gorée Island, where it is said the captured Africans passed through into the Atlantic on their way to slavery in the Americas. Gelatin silver prints are developed in salty fluids; the sheer magnitude of these prints must have required a small ocean of silver halides to manifest their sweeping tonal range from deepest black to faintest gray. Ironically, it is precisely the reflective character of the gelatin silver printing that can produce such legibly subtle gradations of darkness. Bey cites photographer Roy DeCarava and poet Langston Hughes—in “Dream Variations” Hughes writes “Night coming tenderly / Black like me”—but here, too, is a reflection of American landscape photographer Ansel Adams. Unlike Adams, who captured soaring images of the West through the white eyes of Manifest Destiny, Bey finds the dark and secluded spaces that sheltered enslaved blacks and protected them from this very same white impulse to master. Bey subverts the academic hierarchy of genres, the pecking order of picture-making that proclaims the historic human subject most worthy of a grand tableau. Having worked for decades to place black people on the historic scale once reserved for whites, Bey turns to black history and black landscapes to do the same. 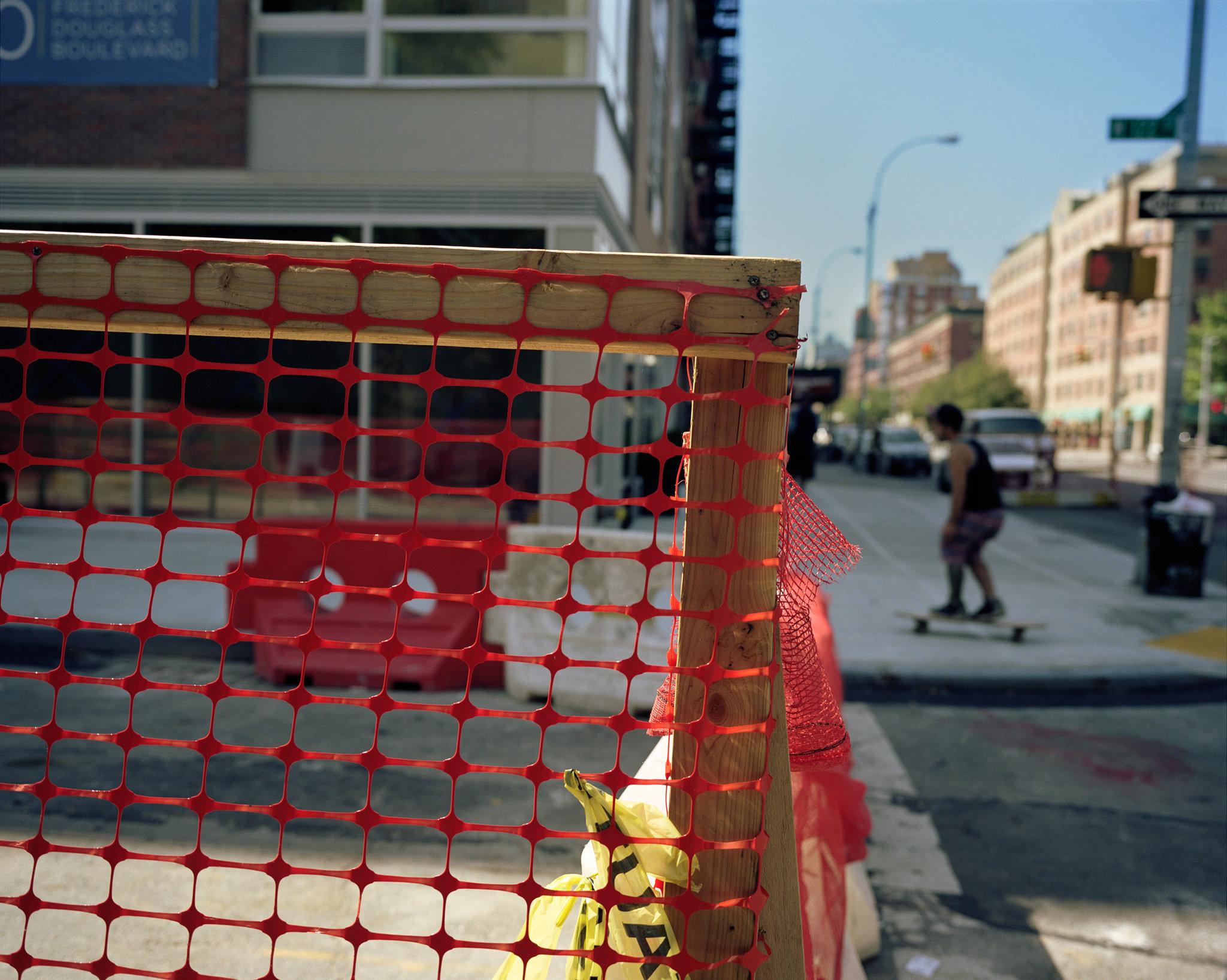 Bey had, in fact, begun photographing landscape and architecture a few years before this most recent project. In 2016, he returned to New York for “Harlem Redux,” a series that captured the rapidly changing urban landscape that upper Manhattan had become. These color photographs confound the gaze with shallow focal distances and busy compositions. Peering through the plywood peepholes and orange plastic netting of construction sites, Bey appears to search for a Harlem that has all but disappeared. Businessmen pass by the shuttered Lenox Lounge, a blood-red graffito drips over a rendering of a coming high-rise, white people wait to be seated outside a sunny restaurant patio. A blunt reading would call it a record of gentrification, but Bey’s myopic technique and uncharacteristic vignetting convey the personal sensation of disorientation he must have felt in seeing Harlem in the year that America elected its property-developer president. 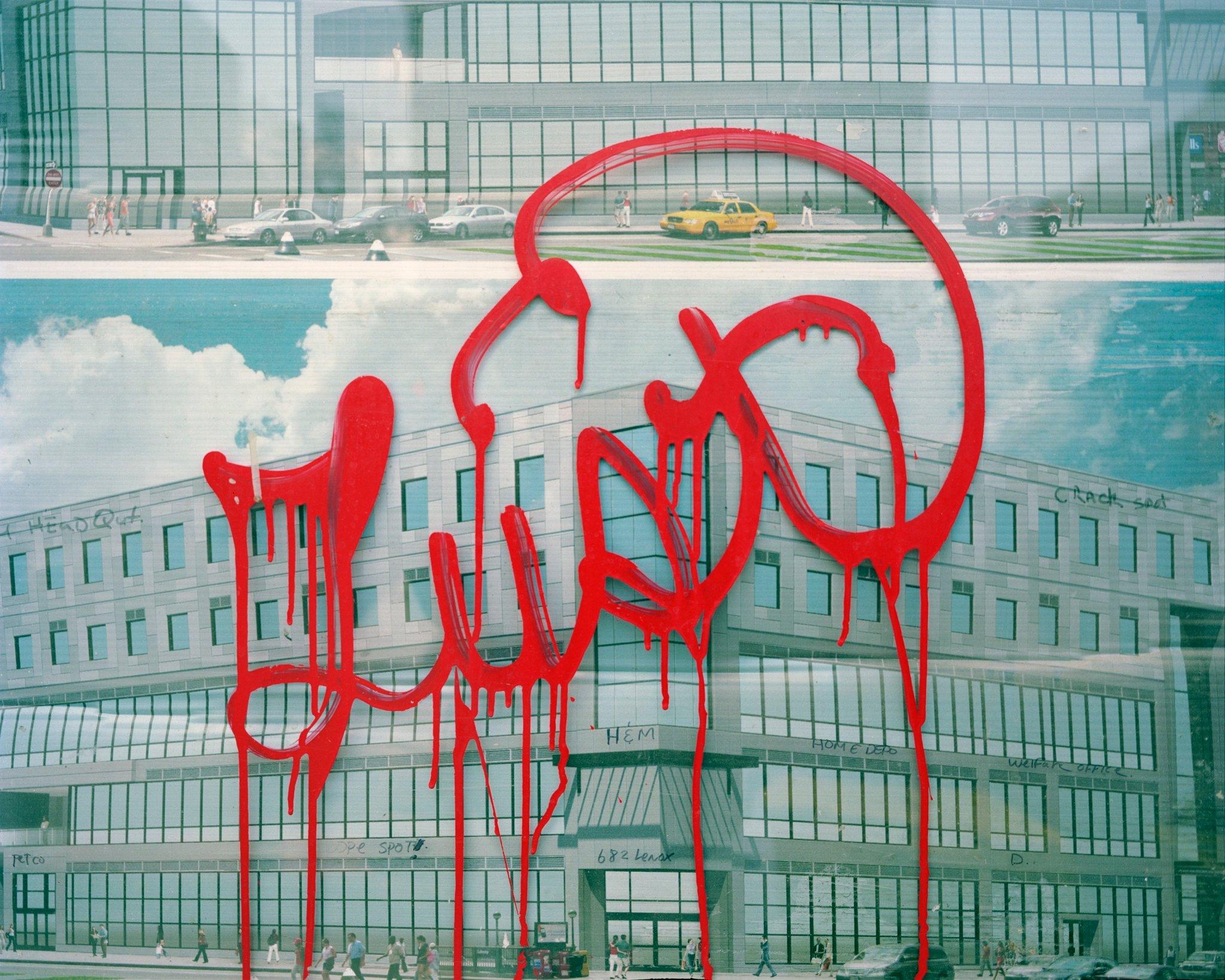 Kenneth Griffin’s Manhattan penthouse was still being developed when he purchased it. Construction was underway after the middle-class tenants of the prior twenty-story, rent-controlled building were evicted and the structure was demolished in 2013. Almost exactly a year before the New York purchase, Griffin paid $59 million for the top four floors of then unfinished No. 9 Walton complex in Chicago, another record broken. Neither of these neighborhoods—Columbus Circle or the Gold Coast—could be said to be gentrifying, but perhaps they are re-entrenching what is already a yawning chasm between the wealthy and the rest of us. With another $60 million penthouse in Miami and a $122 million mansion in London, it is likely that Griffin won’t spend much time in his New York pied-à-terre. But on a clear day when he is there, I hope he looks north from his penthouse balcony, across Central Park and all across Manhattan, to see Harlem as it never was before.