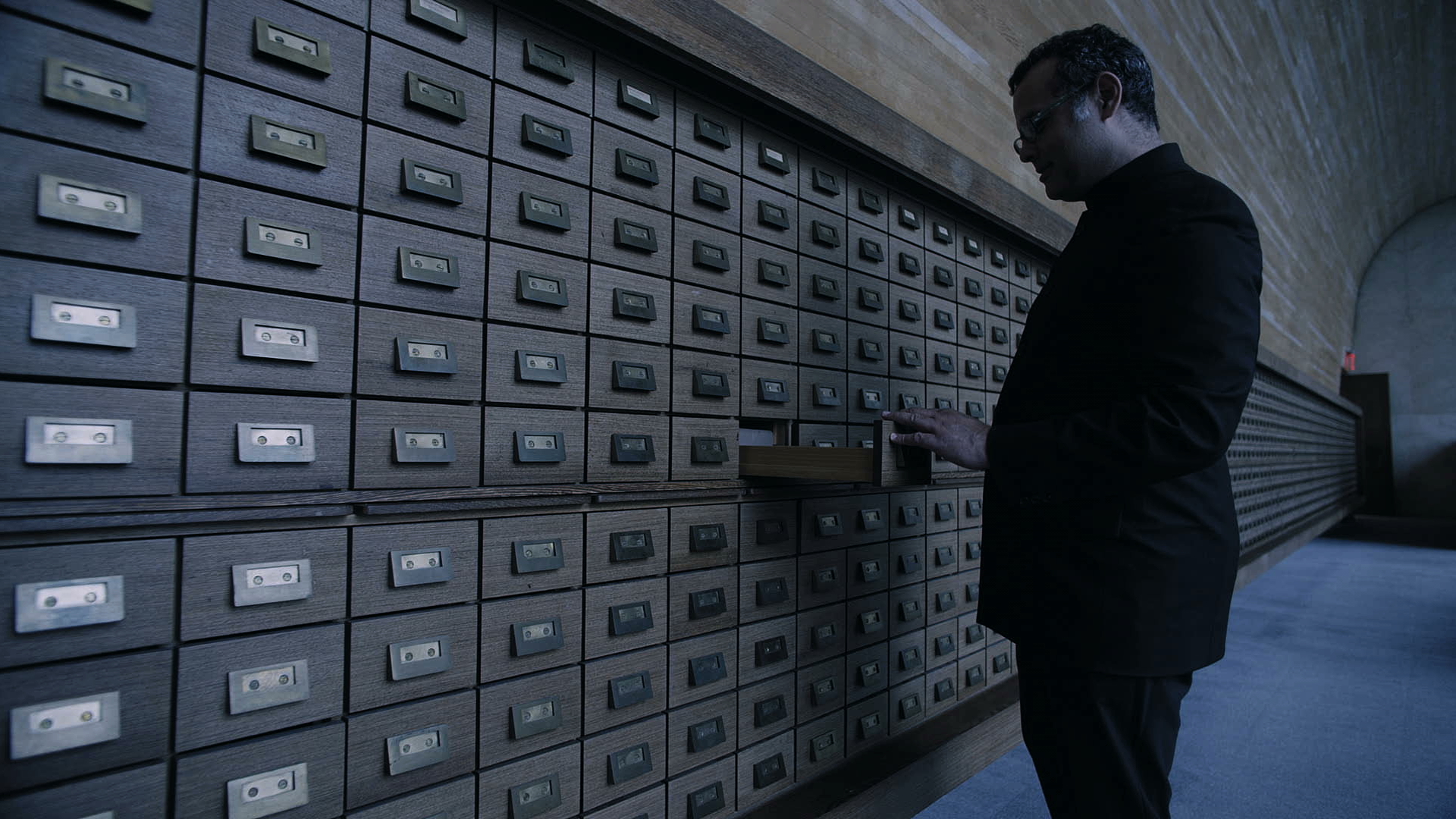 Still from Naeem Mohaiemen’s “Two Meetings and a Funeral,” 2017. Courtesy of the artist.

“Two Meetings and a Funeral,” a three-channel film installation by Naeem Mohaiemen, offers an enthralling study of the transcontinental mobilizations of the Non-Aligned Movement (NAM), the Organization of Islamic Cooperation (OIC) and the birth of Bangladesh as a nation-state. Taking the viewer on a long archival stroll, Mohaiemen traces the trails of peoples, events and stories entangled with films, photographs and sites of the meetings of NAM and OIC in Algiers and Lahore as the pivotal political shapeshifters within the larger decolonization and anti-imperial struggles during the 1960s and 1970s. The film reflects upon the hopes and failures born within the alternative political and social imaginaries propelled by NAM and OIC, which sought to counter those of the Western bloc and the Soviet Union.

Mohaiemen’s installation is an act of return to the archives pertaining to these movements, architectural locations of their meetings in Algeria and Pakistan, and individuals whose involvements were instrumental to the larger outcome of the utopian projects of NAM and OIC. It includes interviews with community activists, artists, politicians and scholars who carry the story forward. They speculate, pose questions, and at times struggle to arrive at a conclusive answer. They wander through the archives with us. They are the protagonists and at the same time the surrogates for the narrative, who personify a complex relationship with it; at times temporarily connected, while there are moments when the phantoms of history and their memories surpass them. Similarly, Mohaiemen deals with the archives as actors, not as concretized facts—it is as if the archives have become the surrogates for history themselves. In Mohaiemen’s expansive body of works, the archives are not considered as dead matter; they are alive, gaze back, and wrestle with their own contradictions and hesitations. In our present neoliberal order, in which history is either instrumentalized or cast aside as obsolete, Mohaiemen has actively tackled such treatments in different projects. In “Two Meetings and a Funeral,” the viewer becomes an active part of an inquiry; one that destabilizes narratives of the past and at the same time employs those stories to wrestle with our memories and collective psyche. How do we fill the gap which has engulfed and numbed our relationships with past anti-colonial struggles in the midst of our neoliberal and neocolonial states of minds and bodies? 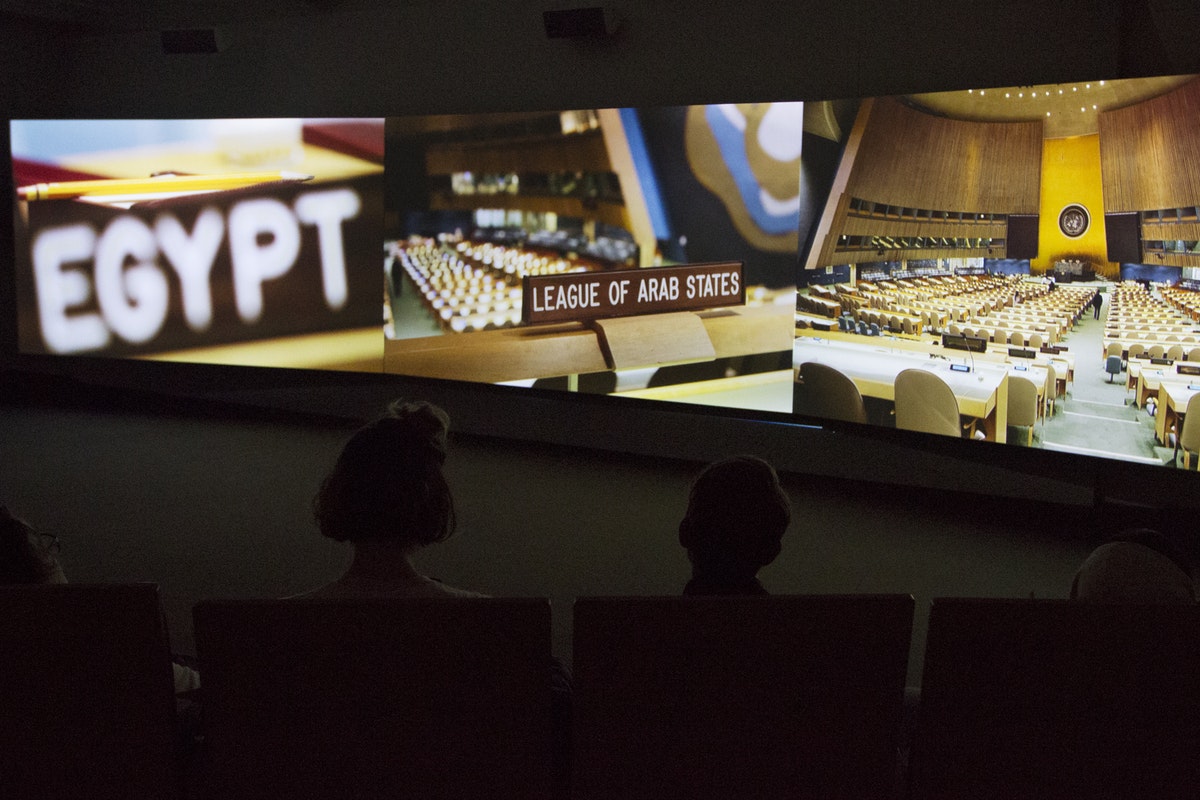 Installation view of Naeem Mohaiemen’s “Two Meetings and a Funeral,” 2017. Courtesy of the artist.

Other recent works of Mohaiemen include the single-channel “Tripoli Cancelled,” which in some respects also returns to residual memories of factual events, but only to take a turn toward fiction. Shot in an abandoned airport in Greece, where Mohaiemen’s father was once stranded after losing his passport and getting caught in bureaucratic procedures—“Tripoli Cancelled” tells a story of loneliness, decay and waiting oscillating between factual elements and fictitious build-up of its protagonist. Conversely, “Two Meetings and a Funeral” is a nonfiction act in which Mohaiemen treats the archives as the sites of precarious knowledges, contested facts and those which have gone through processes of erasure, normalization and forgetting. It returns to the margins of the archives in search for gaps, absences and possibilities for “interventions” or “aspirations for a collective project,” as suggested by scholar Arjun Appadurai. The installation plays a seminal role in Mohaiemen’s storytelling, with which he works through the different temporalities of the archives. At times the screens speak in tandem, while they may fall behind or go against each other’s temporality and story. Challenging the binary between what is considered living and what is deemed as dead, particularly with regards to archival materials, Mohaiemen neither treats the archives as dead nor does he declare the utopian imaginaries of NAM and OIC as complete failed projects. We are surrounded by a gap between our present postcolonial condition and memories of those struggles which have preceded us. Our memories may be bruised but the archive is alive. We may just need to be willing again to die for our dreams.

Naeem Mohaiemen’s “Two Meetings and a Funeral” shows through March 31 at the Art Institute of Chicago, 111 South Michigan.