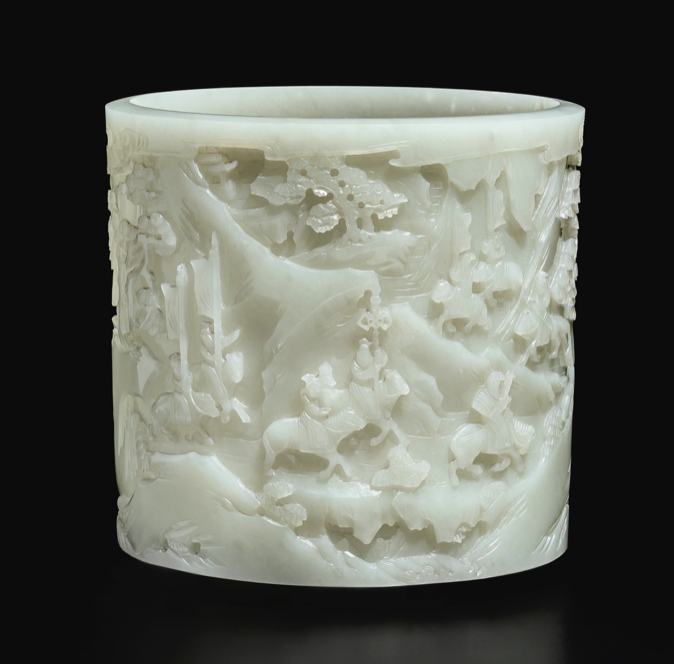 This morning, as part of Sotheby’s “Important Chinese Art” sale, twenty-two Chinese jade artworks that have been part of the Art Institute of Chicago’s collection, some since 1900, will be on offer. Estimates on the works range from $2,000 for a nineteenth/twentieth-century jadeite bowl to $1,200,000 in the case of a rare white jade “Imperial Procession” brushpot from the Qing Dynasty, Quianlong-Jiaqing period. The museum has issued no press release that announces these deaccessions, which happens more often that one might think.

On Sunday, March 17, Sotheby’s posted an image to Instagram of a carved brushpot from the Institute’s collection that will be for sale today (estimate $400,000-$600,000). Its accompanying caption mentioned the inclusion of the twenty-two works from the museum as part of their Asia Week exhibitions, in which more than 1,150 works will be presented.

The press office at the AIC explains that these works’ sales are part of a process of “refining the permanent collection of the Art Institute. Their decisions are not made lightly and are based on ongoing research on the collection, the exhibition and publication history of specific works, and the relative importance of specific works in light of the collection as a whole. Some of these works have been considered for deaccession for many years.”

Kati Murphy, executive director of Public Affairs at AIC continues: “Funds from sales of deaccessioned objects are used exclusively for the purchase of works of art in the department concerned and the original donor’s name is always retained on the credit line.” She also noted that these deaccessions are consistent with guidelines put forth by the Association of Art Museum Directors. (Those guidelines can be found here.)

Those guidelines require, among other things, that “funds received from the disposal of a deaccessioned work shall not be used for operations or capital expenses. Such funds, including any earnings and appreciation thereon, may be used only for the acquisition of works.” Indeed, this is the crux of other museum controversies, such as the Berkshire Museum’s sale of artworks from its collection to underwrite museum expansion rather than developing the collection. 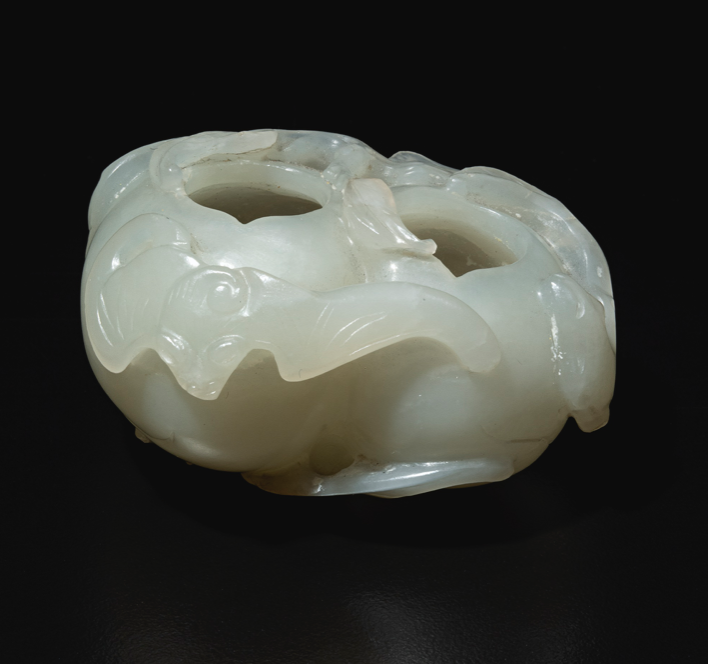 Many of the artworks up for sale were part of a gift in 1900 from Samuel M. and Matilda Nickerson. Nickerson, a banker, also had a massive residence built in Chicago that he called “The Marble Palace”—it now houses the Richard H. Driehaus Museum. Other donors of the works for sale include Katherine S. Buckingham (gift in 1925), Sadie Feika (a gift of jade writing tools in 1966), Grace Brown Palmer (gift in 1967), Chester D. Tripp (gift in 1973), Florence L. Miller (gift in 1985) and Janis H. Palmer (gift in 1986).

News of this sale brings up questions about the roles of institutions, how they grow and the populations they serve. Last April, the museum’s long-range plan with hopes for building a new building devoted to Asian art was brought up when museum trustee Janet Duchossois and her husband Craig Duchossois donated $70 million cash to the Institute. While there have been no publicly confirmed plans for the funds’ use or for this possible expansion for the Asian Art collection, it’s an added indication of developing attention around AIC’s Asian holdings. According to the museum’s website, the Asian Art department has 35,000 objects in its collection (well, minus twenty-two). It represents more than ten percent of AIC’s approximately 300,000 artwork holdings.

As an educator at the School of the Art Institute of Chicago (SAIC), I can attest to the considerable number of Asian, specifically Chinese students who are learning an art history that needs to be inclusive of their countries’ cultural contributions. Katrina Valera, director of Student Affairs for Diversity and Inclusion at SAIC, confirmed that of the 3,640 students enrolled in the Fall 2018 term, 1,300 are international students, with 600 from China. Not inconsiderably, more than sixteen percent of SAIC’s current students are from China. (Find more about the demographics of the student body here.) At the level of the classroom, many faculty are redoubling their efforts to better represent a narrative (or set of narratives) that accounts for cultural practices outside the West. Doing that work means learning art histories that weren’t fostered in the classrooms in which we were trained.

It also means that we might form critiques and analyses of the ways art museums are taxonomized ethnically and geographically, as well as the criteria by which objects are assigned value. What is produced, for example, in a site-responsive exhibition by Chinese painter Xu Longsen that ran through different Asian art galleries and adjoining interstitial spaces, and culminated in an installation in the gallery space designed by Japanese architect Tadao Ando? How would the installation of paintings by M. F. Husain have been read in the Modern Wing rather than shown across five of the museum’s Asian art galleries? In both cases, the contemporary artworks were made useful as a tool for understanding traditional and even ancient artistic practices. And certainly these projects broadened and deepened the Institute’s engagement with a global/ized stage of cultural discourse. But what were the other collateral effects of such installations?

This report isn’t meant to incriminate the Institute, but rather to remember some of the interrelated and interdependent mechanisms of the art world that are excited by news of this sale. In fact, a less opaque, more publicly fostered conversation around accession and deacccession processes could be profoundly useful for artists, students and more general museum audiences to better comprehend what art institutions are, how they have been constructed, and how they change over time. The idea of a “permanent collection” is a misnomer that warrants deeper investigation. Far more interesting than maintaining even a relative notion of stability for collecting institutions would be the staging of shared inquiries that reflect on museums’ positioning within circulations of capital, power and cultural authority.

We would do well to remember that bankers like Samuel Nickerson and captains of industry contributed to the construction of the collection, that what is on display and what is collected teach audiences—particularly art students—where they fit into the sweeping narrative of art, and that the collecting practices of institutions are rarely transparent, often moving without public comment and announcement. What are the rationales and methodologies for accession, deaccession, disposal and what the raised funds will be used to purchase in the future?

At the time of publication, the Institute’s press office hadn’t passed along word from the curatorial team that has overseen these deaccessioned about what one would hope are a nuanced ethics that have determined these decisions. Admittedly, they were contacted for comment at extremely short notice after Sotheby’s Instagram post this weekend.

I don’t believe there is inherent and automatic value in perpetually cohering a collection of objects within museums. It may be that the collection as it has stood is redundant in some areas (many of the works up for sale harken from the Qing dynasty for instance), while there may be gaps in the museums holdings that might be corrected with the resources gained from these sales. Instead, my argument is for shifts in what the museum presents and how, so that not only art objects but the ways in which they have come to appear before us are brought into consideration. Exhibit the planned deaccessions; in fact, exhibit the plans themselves, too. An art institution’s mystique risks reinforcing the exoticizing mythologies that trail behind art and its collection. Instead, may we scrutinize and celebrate the structure and activities of the museum, not for any inflated sense of outrage but to support the space of art’s engagement with the broader material, economic and political world inside of which it is embedded.

UPDATE: By Wednesday evening, Sotheby’s posted the results of the auction. All of the Art Institute pieces met at least the estimate, but in most cases, far surpassed them.