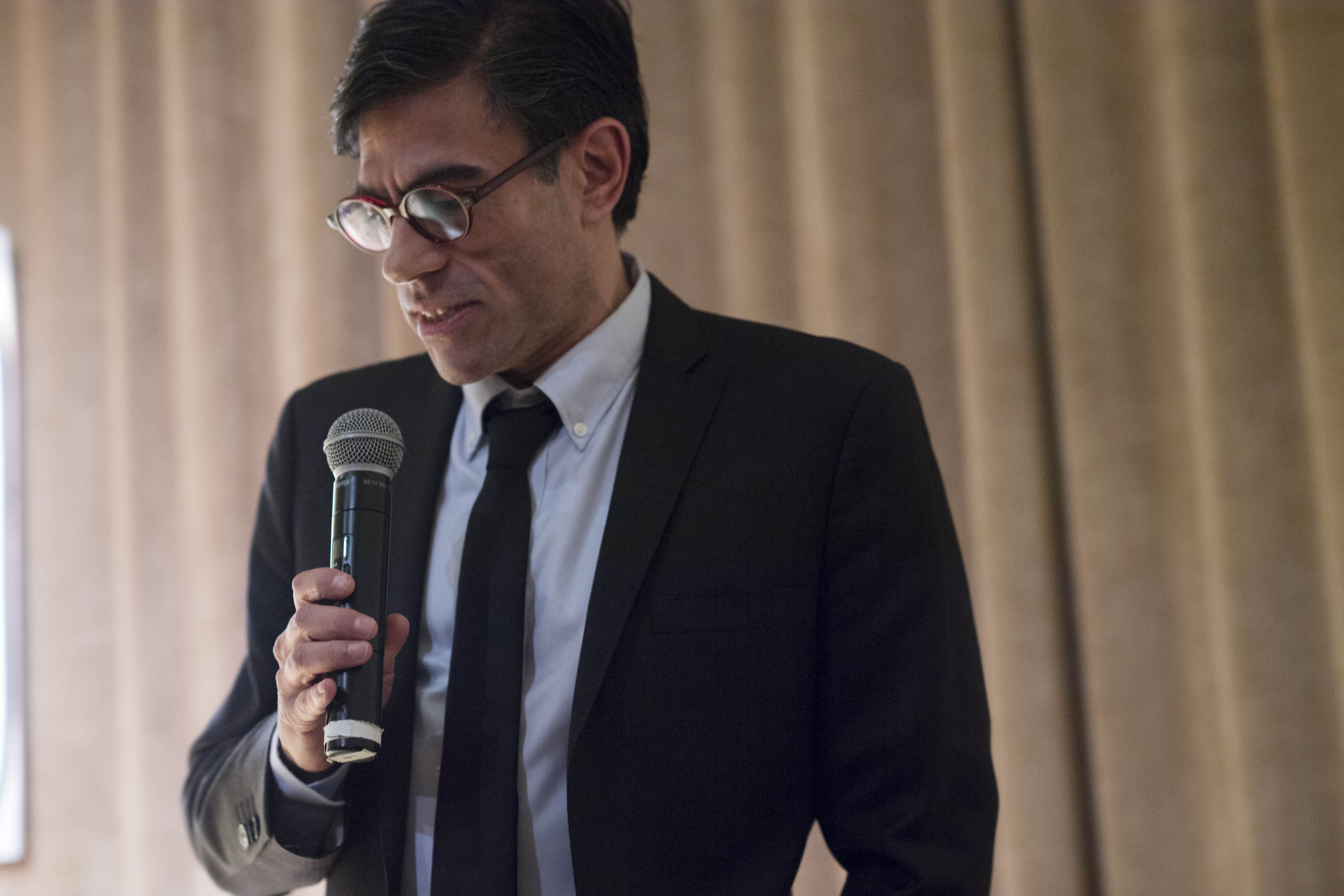 When it comes to the work of Gregg Bordowitz, the revolution will be televised.

In the late eighties, Bordowitz experimented with televisual technology as he navigated the stories central to his personhood: Judaism, queerness and AIDS activism. Combining the intimacy of memoir and the raw edges of public broadcast, Bordowitz dropped in on a longer history between social movements and the moving image.

“Bordowitz was among the first video-makers to record direct action protests within ACT UP, yet this innovation was made possible by an attention to prior histories—activists’ innovative thinking about the role of media within direct action civil-rights movements of the forties to the sixties,” says Solveig Nelson, co-curator of “I Wanna Be Well,” the Art Institute of Chicago’s forthcoming retrospective of Bordowitz’s work. (ACT UP is an acronym for The AIDS Coalition to Unleash Power, in which Bordowitz was active.) Nelson and fellow curator Robyn Farrell have worked closely with the artist in bringing the show from Reed College to the the Art Institute, attaching “Chicago additions” along the way that attest to Bordowitz’s relationship with the city. The end product will be an exhibition chronicling over thirty years of multimedia work, including selections from the artist’s personal library archive as well as his well-known art made for television. 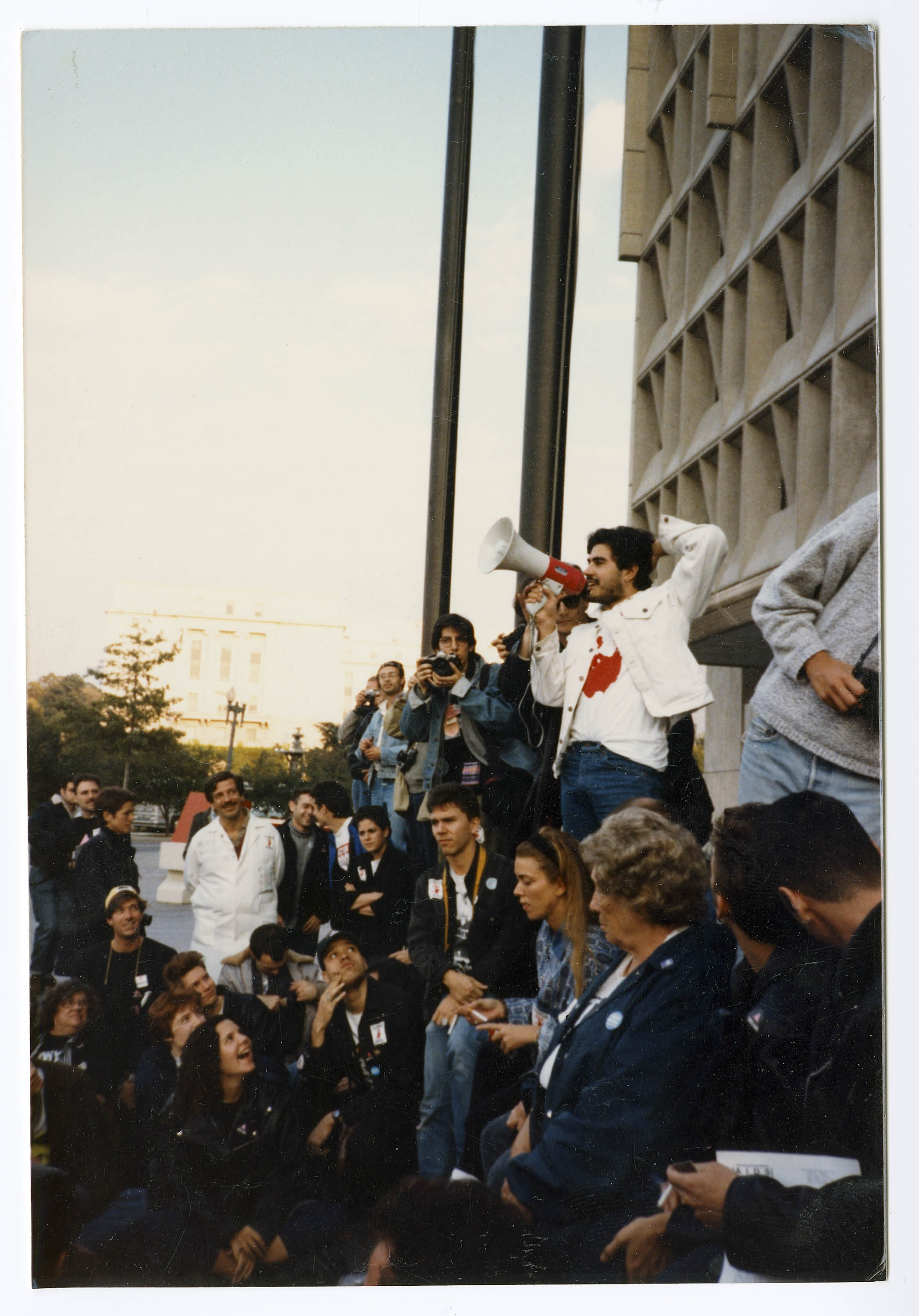 Gregg Bordowitz addressing a crowd in front of the Food and Drug Administration, 1988. Courtesy of the artist.

“He subsequently utilized this protest footage in very different modes of work within his oeuvre, from didactic videos intended to advocate for a public health movement, to the influential essayistic video ‘Fast Trip, Long Drop’ (1993), which juxtaposed performance documentation, archival footage and recordings of ACT UP demonstrations.”

According to the curators, “Fast Trip, Long Drop” builds upon histories of early feminist video art, drawing deeply from the work of Martha Rosler and Barbara Kruger.

“Similarly, Gregg’s recent video ‘Only Idiots Smile’ (2017) switches between two cameras in a way that resonates with early television’s aesthetic limitations and possibilities,” Nelson says. “In other words, like many artists associated with appropriation and conceptual art, the goal may not necessarily be invention, but rather generating new ways of seeing, sometimes via repetition.”

Bordowitz, born in Brooklyn in 1964 and raised in Queens, landed in Manhattan’s East Village at eighteen. The pre-Giuliani cityscape was a glam and gritty underground of nightlife and punk scenes, situating Bordowitz in a pulse-pounding moment of chaotic creativity.

“But as postmodernism, feminism and multiculturalism assayed the canon, AIDS began claiming lives and the legislative disciplining of the ‘infected’ body became part of an extant conservative agenda to oppress labor, social equity and freedom of expression,” Nelson says. “In New York in the eighties, the choice was clear: act up or die.”

Upon his HIV diagnosis in 1988—before antiretroviral drugs were readily available—Bordowitz devoted himself to guerrilla artistic work with ACT UP. His work was at once diaristic and a form of public politicking. 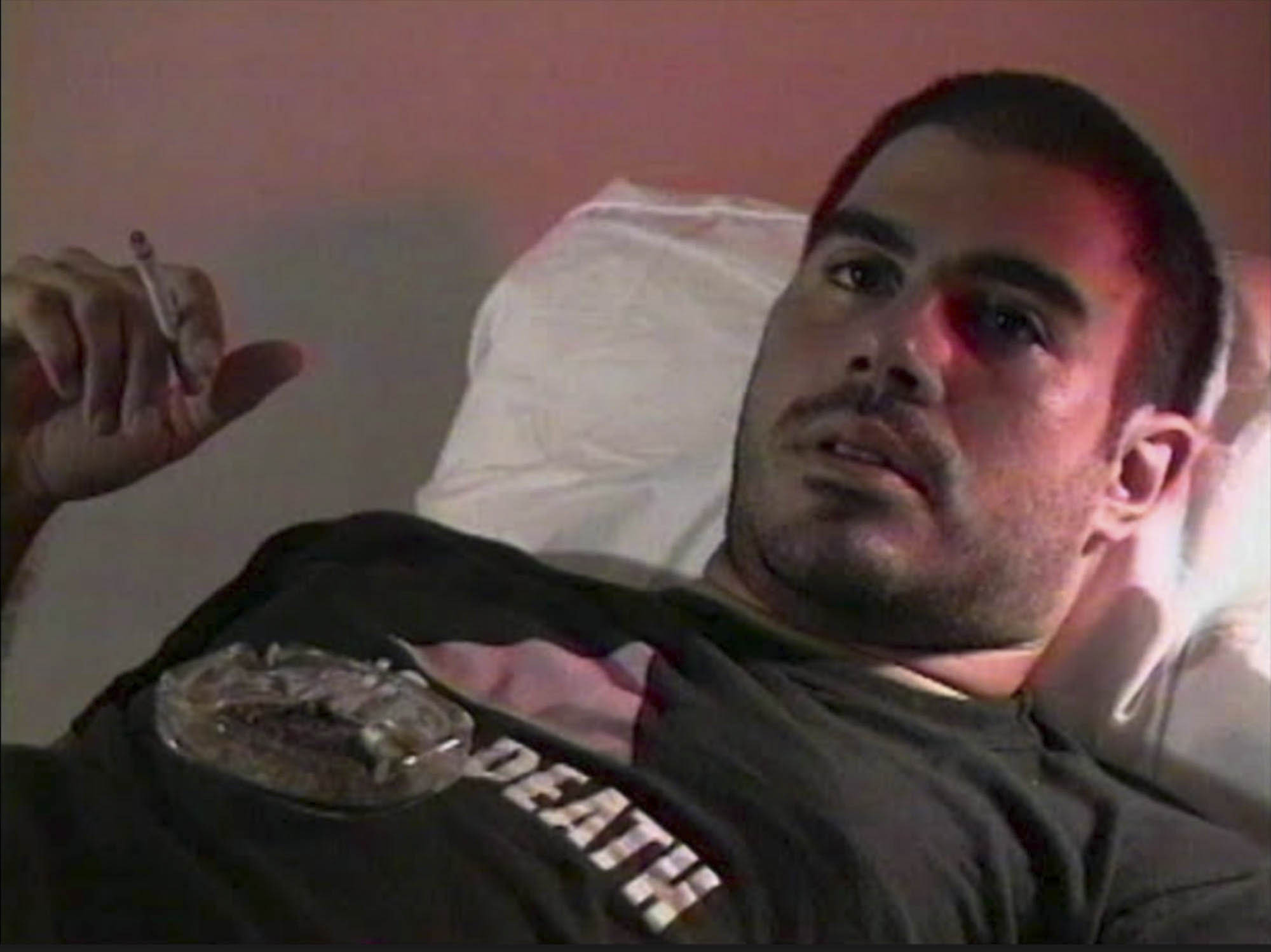 “I’m not sure if Gregg would use the word ‘radical,’ but I think we can ask, how does Gregg’s work position media and art as capable of generating social transformation? Take for example Gregg’s first video ‘some aspect of a shared lifestyle’ (1986), exhibited in William Olander’s exhibition at the New Museum, ‘Homo Video: Where We Are Now’ (1986-87), one of the earliest exhibitions of queer video,” Nelson says. While the video preceded ACT UP’s formation in 1988, Bordowitz analyzes CDC statistical reports that suggested a shared pattern of risks within the homosexual and Haitian communities, along with drug users.

“Bordowitz identifies a particular formal pattern—narratives in newspapers and television news broadcasts that describe AIDS as a problem only for certain groups—and then proposes a different kind of pattern that is both formal/aesthetic and political: the formation of coalitions,” Nelson says. “In other words, Gregg uses strategies found in art movements such as conceptual art to the ends of activism.”

But, as this activism waned in the early nineties and Bordowitz’ health and community were dissolving, he channeled his despair into “Fast Trip, Long Drop.”

“So total was the burden of illness—mine and others’—that the only viable response, other than to cease making art entirely, was to adjust to the gravity of the predicament by using the crisis as a lens,” Bordowitz writes in the introduction of “The AIDS Crisis is Ridiculous and Other Writings: 1986-2003,” a collection documenting his experiences during the epidemic and within its repercussions. 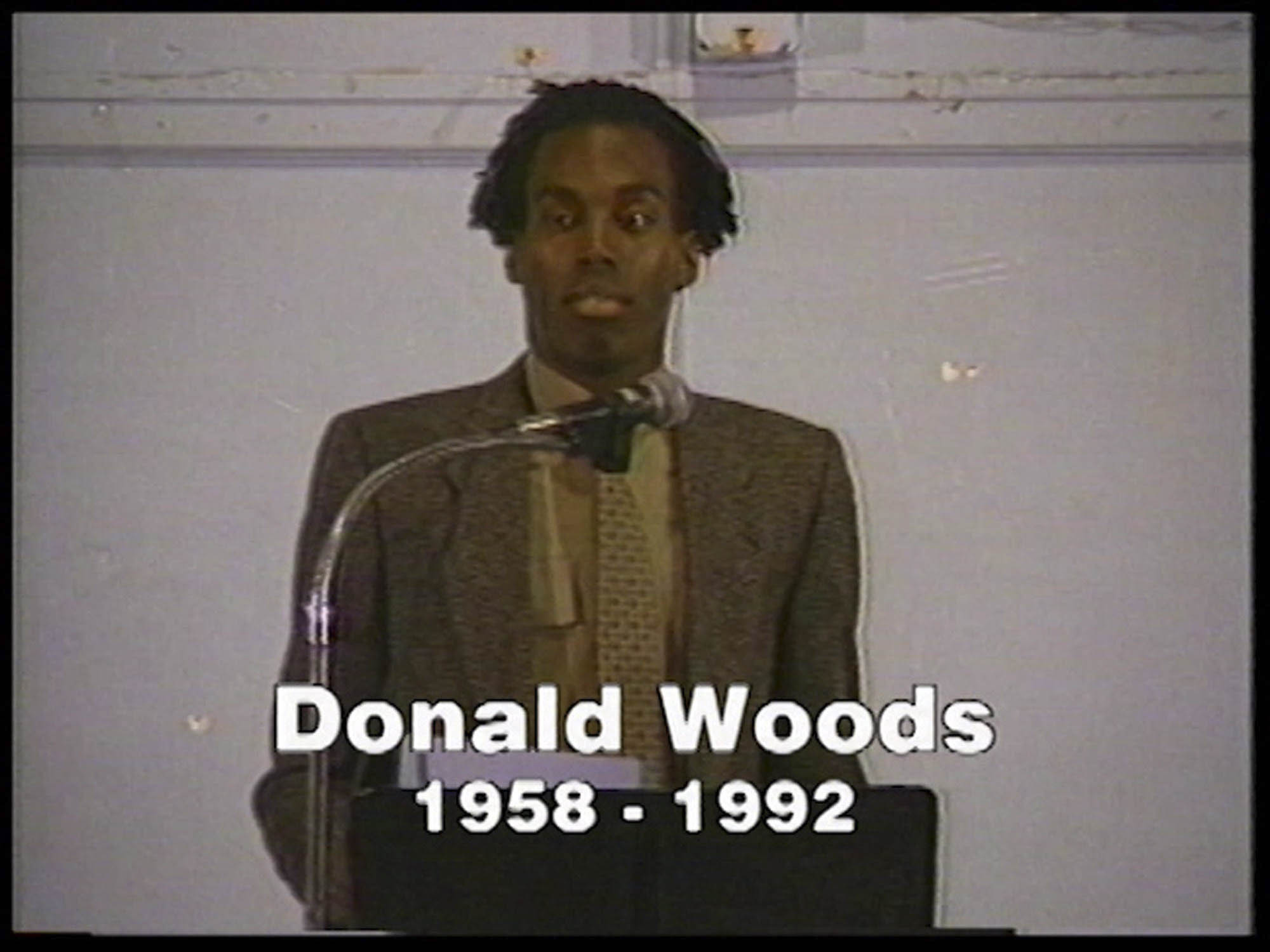 As his career moved into an institutional setting, Bordowitz landed teaching and research positions at spots like the School of the Art Institute of Chicago and Brown University. He currently directs SAIC’s Low-Residency MFA Program. The curators see Bordowitz’s legacy occupying the gray area between the museum and the rally, even though they are sure he’s hesitant about naming his impact on queer history.

“I don’t know that Bordowitz would identify with a desire to produce legacies, but he does talk about the importance of a second generation of conceptual artists—including, but not limited to himself—who brought questions of gender, race and sexuality into our interpretations of the space of the museum,” Nelson says. “Bordowitz might be more interested in collective legacies, as well as the role of teaching in creating intergenerational dialogue.”

Nelson and Farrell assert that while these dialogues now take up space in an abundance of media including poetry and opera, the moving image remains at the center of his projects, with Bordowitz exploring how film and video relate to language. For example, his 2012 poem “There: A Feeling” features the artist stating, “I’m trying to show how conjunctions yield new substances.”

“Bordowitz’s recent works, from poetry to the performances ‘Some Styles of Masculinity’ (2017), accumulate identity positions that are sometimes seen in contradiction,” Nelson says. “Bordowitz’s goal does not seem to be to produce equivalences, but to allow for the friction that multiplies the ways that we conceive of sexuality.”

“Gregg Bordowitz: I Wanna Be Well” shows through July 14 at the Art Institute of Chicago, 111 South Michigan.