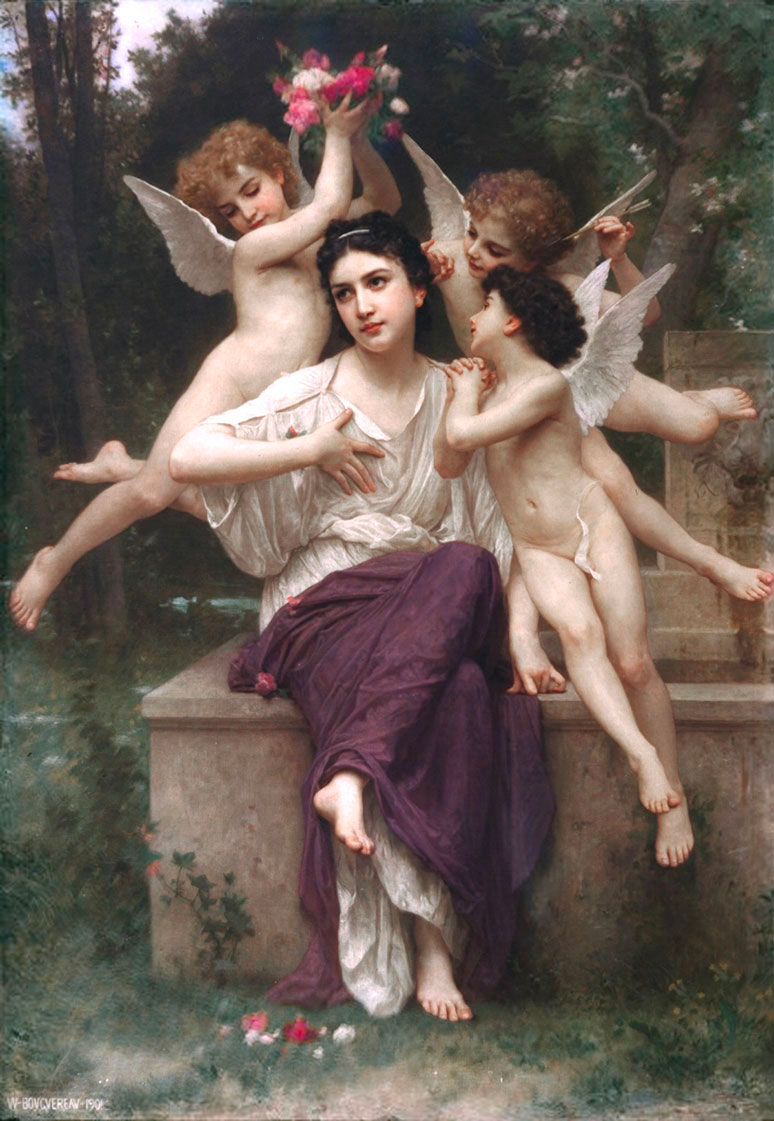 William-Adolphe Bouguereau, “Dream of Spring,” 1901. Oil on canvas. Indianapolis Museum of Art at Newfields, Gift of Melvin and Bren Simon 2013.33

The reputation of the celebrated French academic painter, William-Adolphe Bouguereau (1825-1905), did not fare well after his passing. At its nadir In 1971, “Work Interrupted” (1891) was purchased at auction for $4,000. With no naked nymphs and only one flying cupid, it’s among the most restrained of his confections. Fully draped in white classical robes, a seated adolescent turns away from the yarn she is winding as an airborne cupid whispers in her ear. Silly—yes, quite silly—but it’s also wistful, charming and pleasant. The intense blueness of the yarn stands out against other, muted colors, and unlike so much of his other work, both the foreground  and background integrate nicely with the central figures. It has the quiet peacefulness of a formal garden where passing thoughts of eros are more likely to be pleasant daydreams than hurtful obsessions.

Perhaps as the result of such qualities, Bouguereau’s reputation has sufficiently recovered for a major retrospective, even if it is only in a regional museum. It is a rare opportunity to reevaluate an artist who was so popular among wealthy Americans in his lifetime, and remains a paragon in the peripheral art world of populist neorealism. This exhibition is limited to paintings borrowed from American collections. Bouguereau himself, however, entered two of them into the annual Paris salon, so he must have considered them examples of his best work. 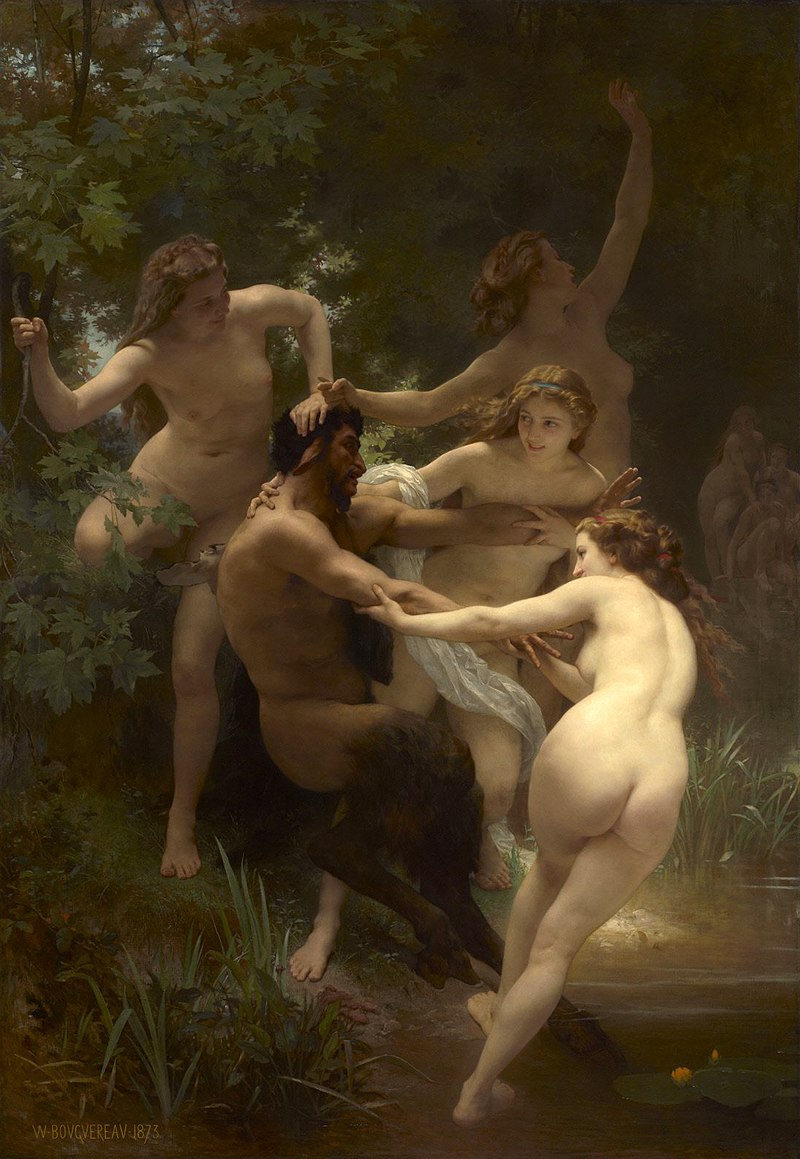 “Nymphs and Satyr” (salon of 1873) is a monumental Arcadian fantasy wherein four nude young women are seen dragging a shaggy and reluctant satyr into a dark pond. It has the same athleticism, rapturous joy, circularity and unbalanced postures of the five dancing figures in Carpeaux’s “La Danse,” a sculpture commissioned for the Opera of Paris some years earlier. As the story goes, the playful young nymphs were punishing the lecherous man-beast who was leering at their innocent frolic. It might be a #MeToo moment, except that male viewers of the painting are encouraged to leer as well. The forest glade is cool and inviting; the girl’s faces are so sweet and innocent; the areas in direct light are so luminous; the figure drawing, especially on the off-kilter hips, is so successful at controlling space while conveying movement. As a composition, the dominant triangle in the center feels rather perfunctory and the four corners of the picture window are dead space. But the figurative ensemble is so lively, all is forgiven.

“Song of Angels” (salon of 1881) resembles an Italian Renaissance depiction of the Virgin and Child with angels. The glowing light on the infant and the cruciform design of his body suggest divinity. But all the figures seem too cute and adorable to be the Queen of Heaven, the savior of mankind, or the messengers of God. It’s the same kind of soft and sweet figuration often found in American cemeteries, and indeed, this painting comes borrowed from Forest Lawn Memorial Park, that glamorous theme park of mortality in the Hollywood Hills. As with “Nymphs and Satyr,” the corners are dead and the overall composition is ponderous. This time, however, there is no energy in the figures to redeem it. 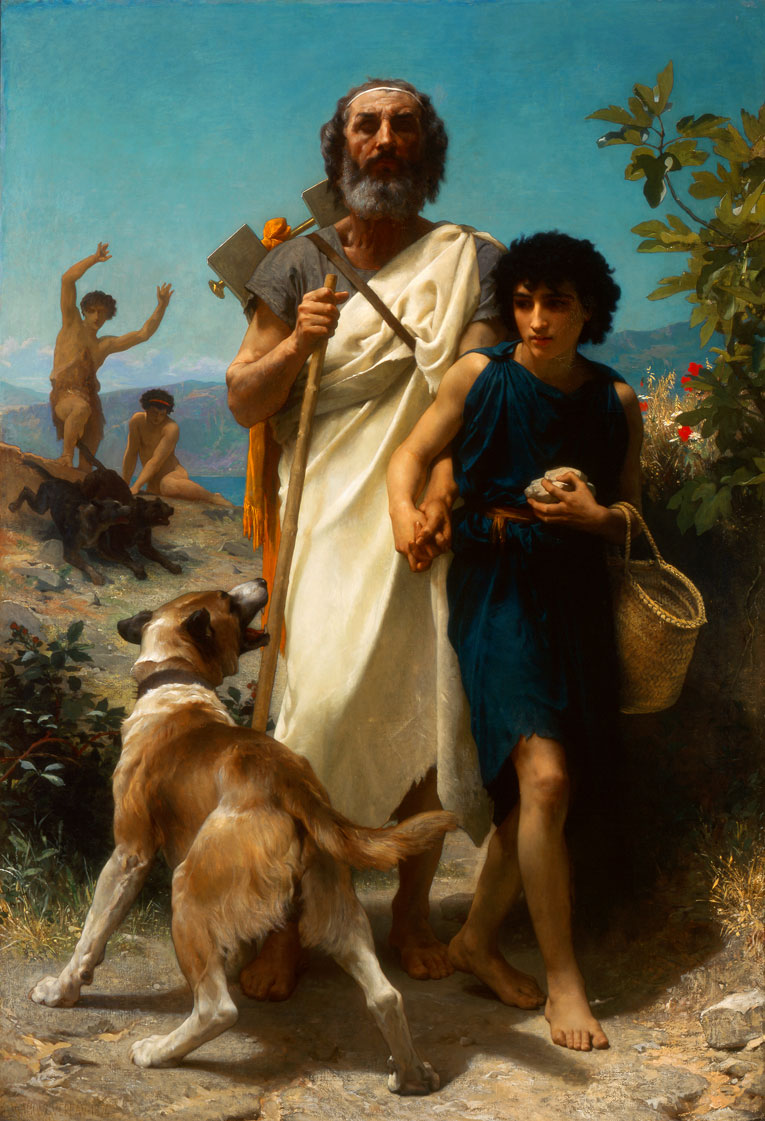 Throughout the rest of the show, it seems that once a painting delivered a rush of sentiment with a noticeable level of craftsmanship, the artist knew that it was already money in the bank and time to move on. Brief biographies in gallery signage tell us that his American clients were successful entrepreneurs in the rapidly growing economy of the Gilded Age. They were quite free from that feudal commitment to the sacred social order that once demanded convincing greatness and profundity from pictorial art. Nor did they feel a need to join the Romantic rebellion against it. They likely thought of themselves as self-made men, and as such, they need not try to understand the world they had conquered. They only wanted to be titillated, flattered, comforted and entertained. Bouguereau’s depictions of charming nymphs and peasants are not much different from the ornate confabulations so skillfully produced by the porcelain factories at Meissen. In an interview from 1905, the artist is quoted as saying: “I soon found that the horrible, the frenzied, the heroic does not pay, and as the public of today prefers venuses and cupids, and I paint to please them.”

Even though the artist is known to have used live models, there is a generic quality to the figuration as well as the design. You hardly ever feel natural light falling over a complex surface to express the dynamics of flesh over tendon and bone. You are always looking at a body type, rather than a specific person. Bouguereau was a storyteller with the skill set of an illustrator or animator rather than an observational figure painter. 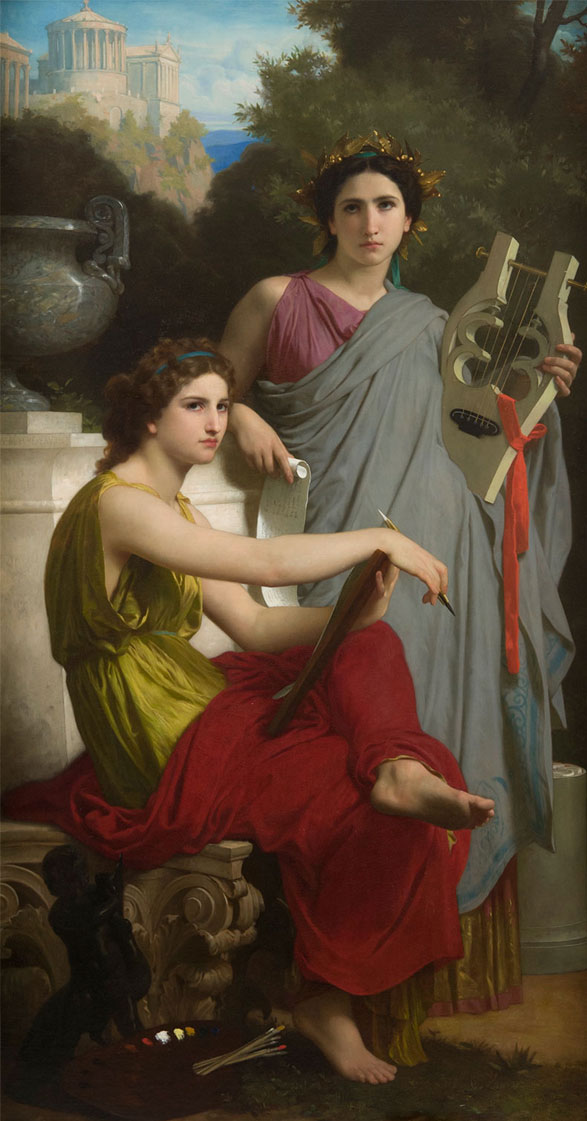 The stories he told were primarily about the cuteness and sweetness of children and maidens, but in the 1880s the work took a darker turn with his depiction of destitute, attractive girls. His “Little Beggars,” pleading for money with outstretched hands were almost exclusively collected by American buyers. Perhaps these wealthy men just wanted to make their fellow philanthropists aware of the plight of homeless children. But this kind of positive interpretation would hardly apply to “The Broken Pitcher” (1892). It presents a cute but shabby barefoot peasant. Behind her is the phallic spout of a water pump; beside her is a broken pitcher, symbolizing, we are told, her lost virginity. She wrings her hands with shame and stares remorsefully at the viewer. What kind of man would enjoy staring back at such vulnerability and sexual embarrassment in a child? It’s doubtful that questions of this kind ever troubled the artist’s mind.

With a profound awareness of neither subject matter nor form, Bouguereau was soon marginalized by the freshness, honesty and excitement of the Impressionists who had their first major exhibition in April of 1874. As brand building has trumped aesthetics in the postmodern art world, however, Bouguereau has returned to the mainstream. Today, his paintings regularly reach seven figures at auction. As Eric Gibson wrote in the Wall Street Journal: “We, too, have an overheated art market driven by the newly rich. We, too, have an artist whose work sells for top dollar and is similarly flawlessly executed, engagingly escapist and vapidly accessible. But no, Jeff Koons couldn’t possibly be the Bouguereau of our time. Or… could he?” It’s hard to deny such similarities. Koons, however, is probably targeting a more cynical and sophisticated buyer, and unlike Bouguereau, does not hand-make the pieces sold under his name. (Chris Miller)

“Bouguereau and America” continues through May 12 at the Milwaukee Art Museum, 700 North Art Museum Drive, Milwaukee.