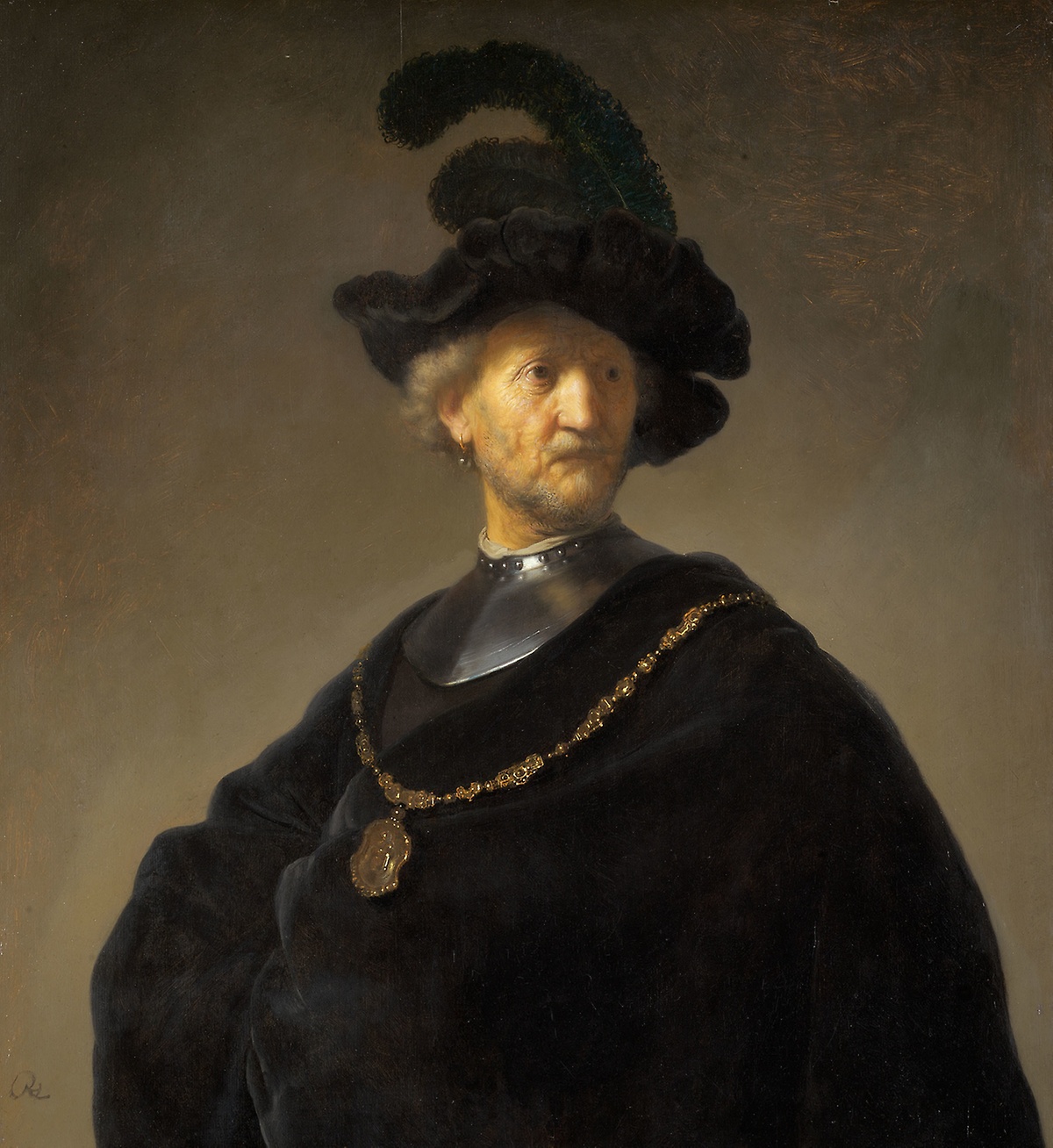 These four paintings might provide quite an educational experience. Organizers of the exhibit suggest that viewers examine how “Rembrandt complicated the genre, constructing identities through props, lighting and ambiguous settings” and then ask “What is a portrait?” It would be unwise to address any question about Rembrandt, however, with just these four pieces. Only one is now attributed without dispute as the finished work of the artist himself. Such a query might best be addressed online with a broad selection of high-resolution images taken from the accepted oeuvre. You don’t really need originals to identify props, lighting and settings.

These four paintings do, however, offer a good opportunity to recognize, by comparison, the exceptional formal quality of Rembrandt’s work. Only one has got it, “Old Man with a Gold Chain” (1631). Coincidentally, it is the only piece in this show whose authorship has not been disputed. Surprisingly, the artist was only twenty-five years old. He had mostly been painting Biblical narratives up until then, supplemented by portraits of himself or older men he pulled off the street. He has draped this old fellow with a heavy black robe and adorned him with a gold chain, polished steel gorget and foppish feather hat. This is not the kind of psychological character study for which the artist would later be known. It feels more like a painter’s joyride, playing with light on flesh and other kinds of surfaces, unencumbered with the need to fit everything into a multi-figure, dramatic narrative. Despite the oddness of the costume and the puzzling expression on the old man’s face, the painting still feels profound. Whether the shapes are as massive as the man’s torso or as tiny as the wrinkles around his eyes, everything feels perfectly edged, lit and set into place—ready to stay that way until the end of time. Even the nebulous background feels perfect as it varies in tone and substance. Unlike the three other pieces hanging beside it, the volume of the figure is thrust into the gallery. This presence and density of design invites repeated, even endless viewing. It has been on display at the Art Institute for ninety-six years and is one of the great treasures of the collection. 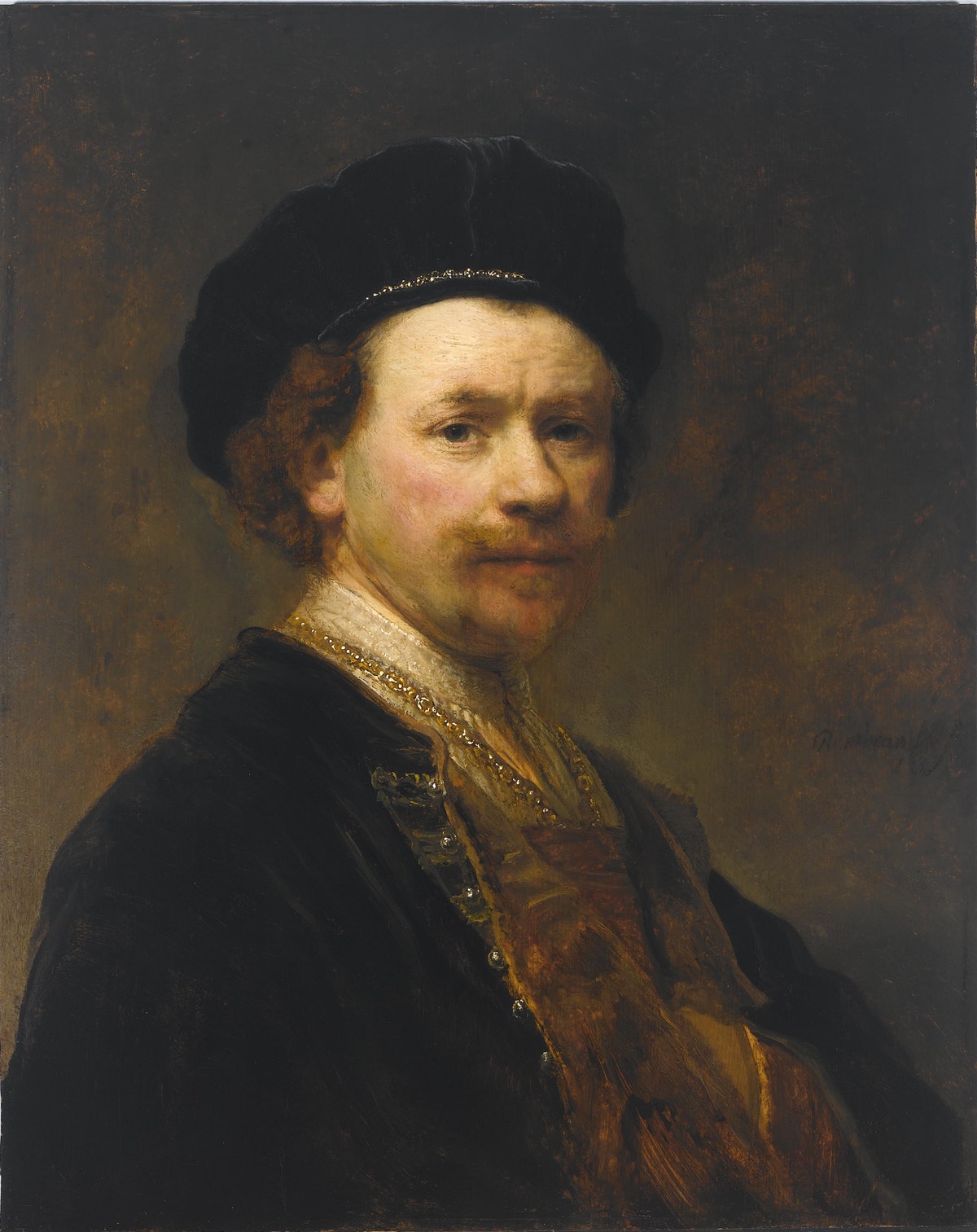 By contrast, the other three pieces appear disposable, even if they’re composed with similar stylistic elements and have subject matter that is more dramatic (a woman at a door), more important (a self-portrait), or more sentimental (a portrait of a boy).

The “Portrait of a Boy” (1655-1660) has been the most newsworthy. Once called “Portrait of the Artist’s son, Titus,” it made the news back in 1965 when it was sold at auction for a record-breaking sum of $2.2 million. The buyer was the West Coast billionaire, Norton Simon (of Hunt’s tomatoes),  who was then acquiring trophy art as well as a trophy Hollywood wife. It’s pleasant but unfinished, especially the unidentifiable blurry creature on the boy’s shoulder. It has sentiment, but not power. The face has expression, but the head has no volume. The same could be said for the “Self-Portrait” (1636-38) that Simon bought at auction five years later. The figure’s hand in his coat may be an interesting gesture but it confuses that area of the painting. The highlights that glisten off the jewelry are crude compared to the precision of such details in “Old Man with a Gold Chain.”

The Art Institute once attributed “Young Woman at an Open Half-Door”(1645) to Rembrandt himself but more recently has allowed that his workshop had a hand in it. The glow and the density of execution just aren’t there. Each red bead in the necklace, for example, has been accurately described but not painted to fit well within its pictorial space. 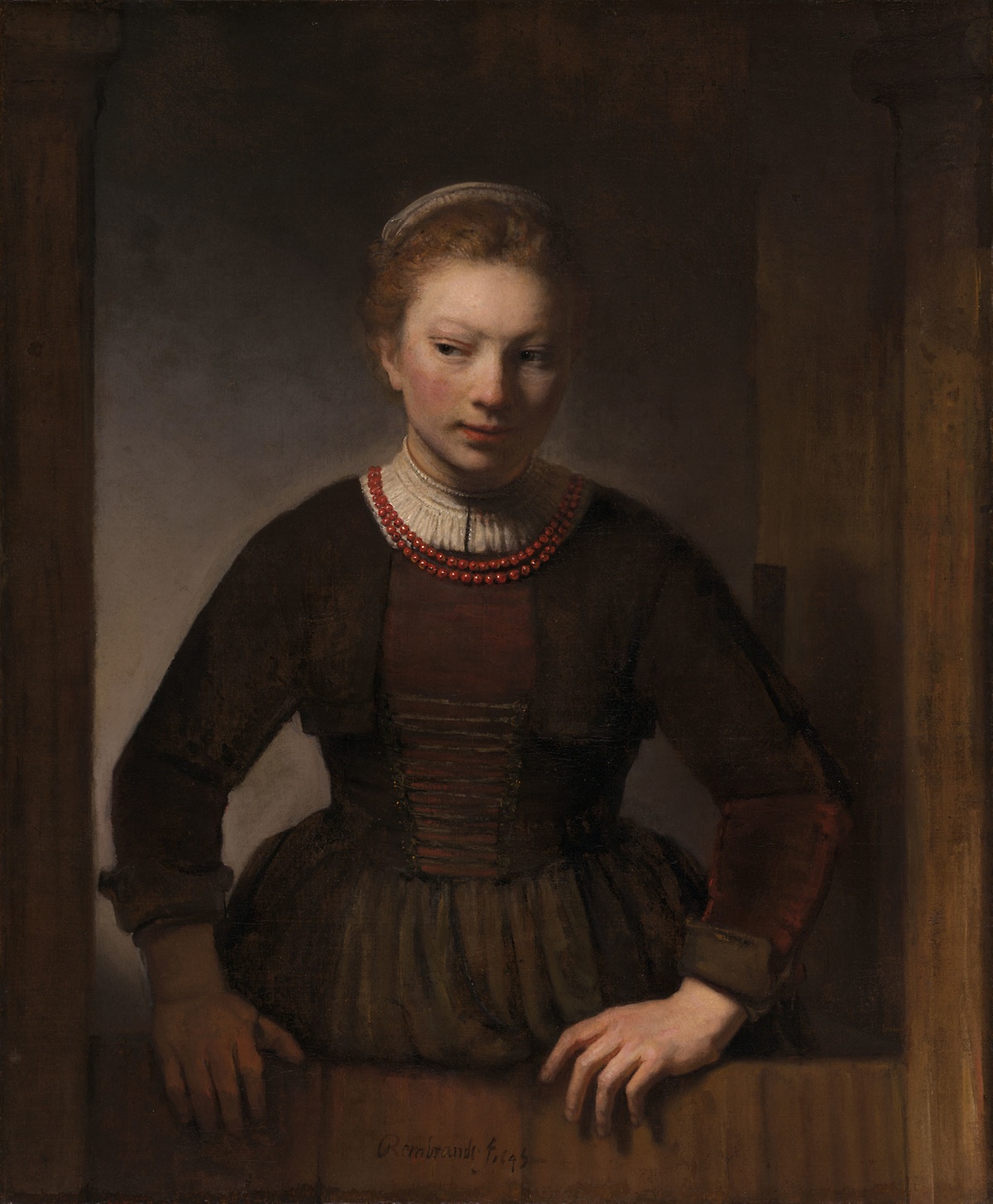 Admittedly, it would be hard for any museum to ignore an opportunity to borrow a couple of “Rembrandts.” And you can’t fault the Art Institute for focusing its presentation on props, lighting and setting. Intense aesthetic quality isn’t there, and even if it were, the reflections off the protective glass in the Norton Simon frames would make it difficult to see. To present these four pieces as if they were all commensurate, however, is to undermine the reason that public art museums exist. As the importance of visual quality is diminished, so is the need to experience it in person.

Rather than hanging three Rembrandt-like portraits next to “Old Man with a Gold Chain,” why not bring in exceptional pieces by contemporary neo-Baroque masters like David Leffel or Odd Nerdrum? Even if they come up short compared with Rembrandt’s best work, the comparisons would be much more interesting. (Chris Miller)

“Rembrandt Portraits” continues through June 9 at the Art Institute of Chicago, 111 South Michigan.