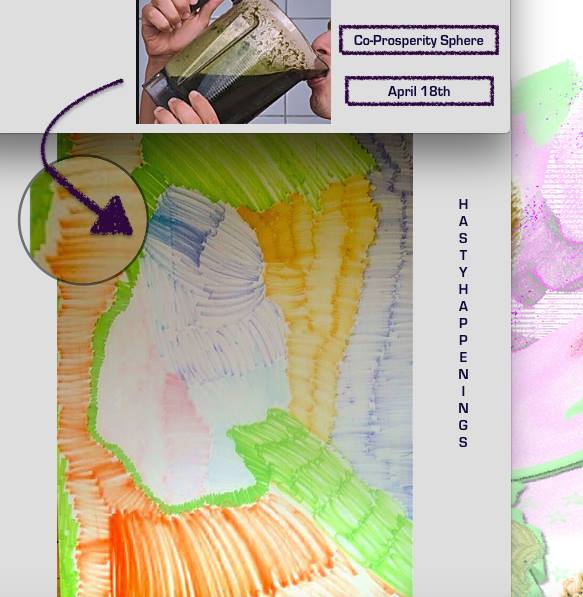 “Hasty Happenings” is a one-night open submission exhibition, to be held Thursday, April 18, at Co-Prosperity Sphere. The event will feature pieces submitted by the public, who are encouraged to submit new work created quickly and without refinement.

Adrien Guadagnino conceived of the exhibition, and organized it with help from Alex Chitty, a member of Co-Prosperity Sphere’s new artist-led curatorial programming council. The council was organized by the Public Media Institute with the goal of helping artists from around the city access the Institute’s resources and make Co-Prosperity Sphere more inclusive and community-focused.

Guadagnino says the inspiration for “Hasty Happenings” is rooted in the sense of community they found in Chicago’s visual art scene. Guadagnino studied acting at Columbia College, but found that the art scene was more receptive to collaboration. They have since committed to working in the visual art space; not an easy task, Guadagnino says, considering their choice in major.

Collaboration and community are central to “Hasty Happenings,” as is democratization. Guadagnino conceived the show during their final semester at Columbia in the fall of 2018, when they found there was a general frustration among artists who felt they lacked institutional validation.

“When outside of an institution or school, it’s up to you to remind yourself that you’re a practicing artist,” Guadagnino says. “When you don’t always have a space to show, you have to keep making just to keep up your motivation.”

After attending a small open-participation sculpting event at a friend’s apartment, Guadagnino found that even small communal shows could be validating. “There was an understanding there of how nice it is to actually finish something and show it to a couple of people,” they say. With that in mind, Guadagnino set out to organize a show to highlight the sort of pieces that artists make just to stay up on their practice.

What started as an exhibition to show their friends’ art soon became a more public affair. “Co-Prosperity asked if I was comfortable with putting on the show so quickly. They were like, ‘Why not make the process of organizing the show just as hasty as the creation of the art?’ And I was like, ‘You’re right, let’s do it.’”

Guadagnino feels that the format of the exhibition is an antidote to the institutional frustrations that originally inspired the show. “For people that have nothing on their CV, or didn’t go to school for art, or otherwise wouldn’t be considered as far as status goes, this is huge,” they say. “And for the people I don’t know and that Co-Prosperity doesn’t know, it’ll be nice for them to come and have this real-life experience of showing your art. And it might bring more opportunities for them in the future.”