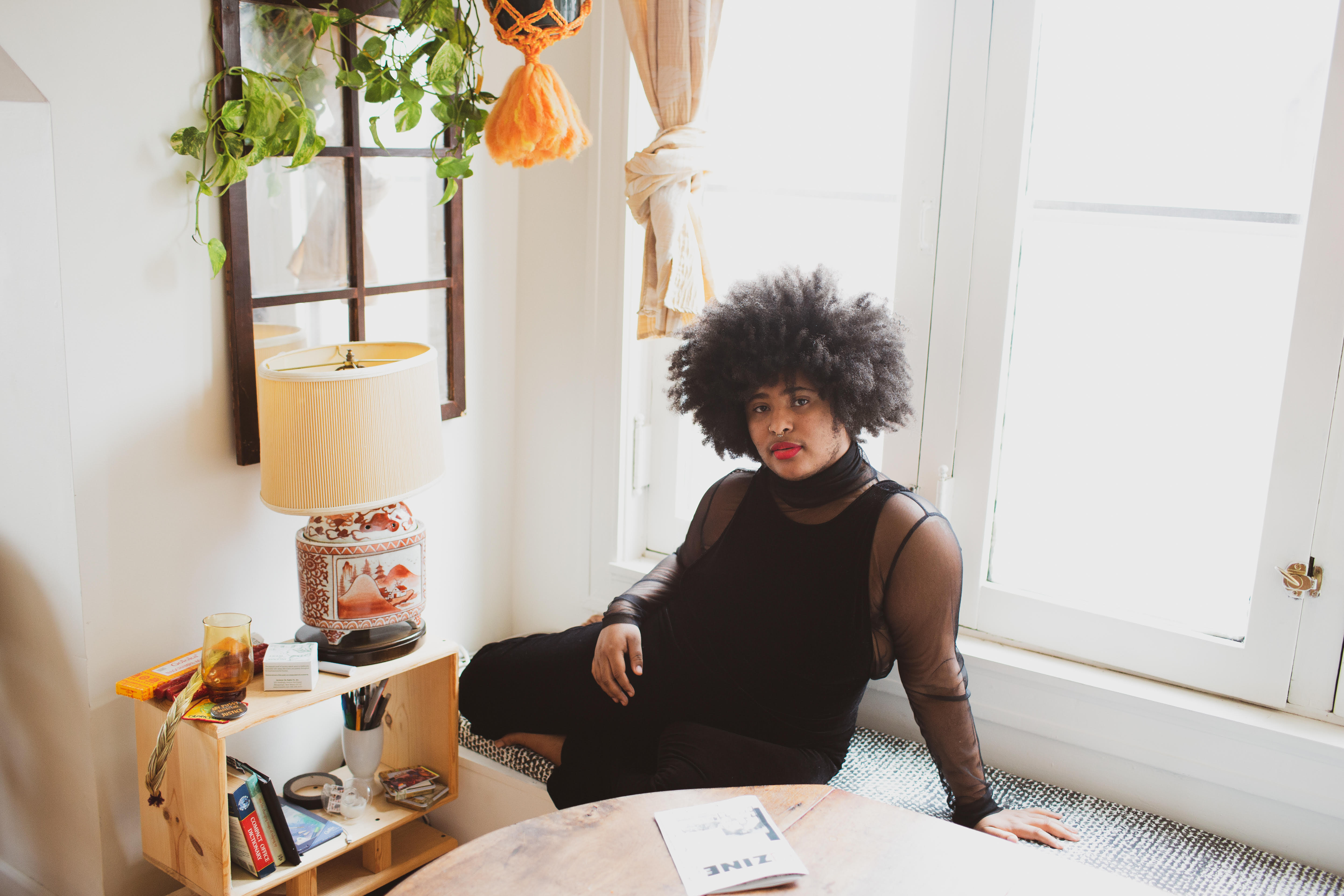 For Amina Ross, a multihyphenate artist who calls themselves an “undisciplined creator,” medium and the concept are always entangled. As an undergraduate at the School of the Art Institute of Chicago, Ross initially did a lot of photographic and installation work but eventually felt more at home working with fibers. “I feel like that comes from fibers being an outcast in many ways,” Ross says. “Because of the power relationships embedded in the medium, discussions of power, which feels really central to my work, always were able to happen in that space.”

Initially from New York City, the Hyde Park-based artist relocated to Chicago for school but also because of what the city itself had to offer. “It was really important for me to be in a space where I felt like I could build community outside of school,” Ross says.

That need for community-building is apparent across Ross’ oeuvre, from “Beauty Breaks,” a workshop series aimed at opening up ideas of black beauty, to their curation of the festival “Eclipsing,” which invites queer and trans artists of color to explore the concept of darkness. “Eclipsing,” which recently completed its second iteration, allowed Ross to manifest one of their goals for this year: to show their work outside of the institutional structures and gatekeepers in the art world. The artist recently traveled to the Netherlands to talk about their 2:22 project, an experimental performance piece that invites couples to film themselves tickling one another. Ross will take part in this spring’s Havana Biennial. In July, Ross will show new work for the culmination of their 2018-2019 residency at Arts & Public Life and the Center for the Study of Race, Politics and Culture at the University of Chicago.

Ross’ desire to work outside of the institutional art world is of a piece with the belief that politics are inherent in every choice an artist makes. There is a strong continuity of themes throughout Ross’ work—intimacy, technology, boundary-crossing—but all are seen through the perspective of power. Lately, the artist has been looking at power in new ways. “I spent a lot of time thinking about the way power works as oppression,” Ross says. “Now I’m really interested in how those mediums can be mobilized to generate a liberatory power. So rather than focusing solely on the oppressor, or oppressing qualities of those things, really focusing on the liberatory potential, and the space in between.” 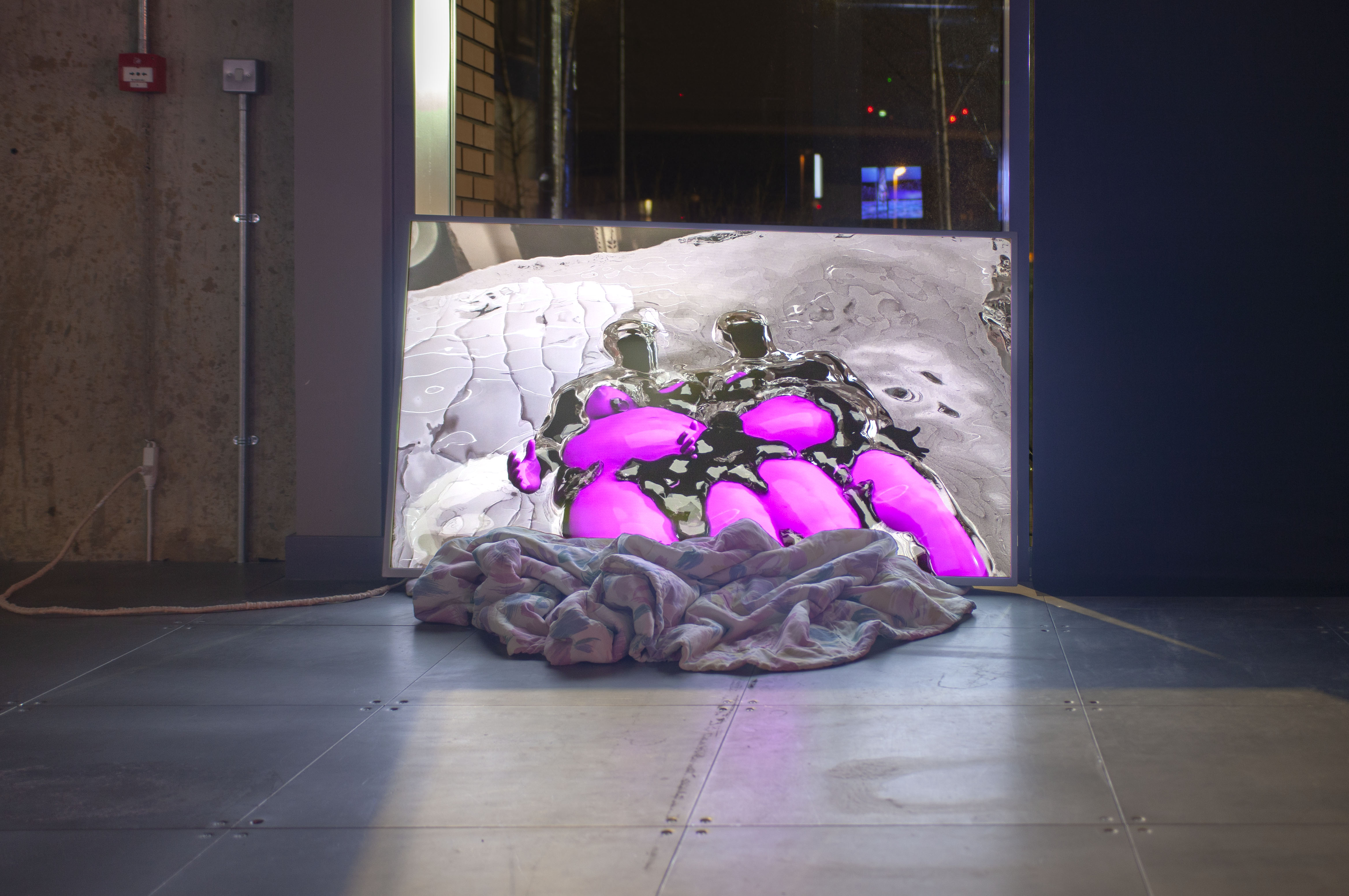 Amina Ross, “by your hands i open/ spill out./ i’m the inside of an egg/ i pour/ we bloom/ magma rushing from a jagged crown of earth/ molten and dangerous and alive/ can’t you feel?” at “Re-Figure-Ground” curated by Kelani Nichole /Photo: Christopher MacInnes

This interest comes across clearly in Ross’ 3D animations, dreamy renderings that envision new worlds and ways of relating to one another. In “from the center of my earth-body / that’s where i love you / from,” a video on display at their 2018 solo show at Prairie, two purple bodies float side-by-side in a silvery pool of liquid. The exhibition text, by Kemi Alabi, called the work “intimacy as life hack.” Two genderless bodies, held by a body of water, sharing an intimate moment outside of any concept of time or place: a future depicting a yet unknown kind of love, made visible by Amina Ross. (Kerry Cardoza)