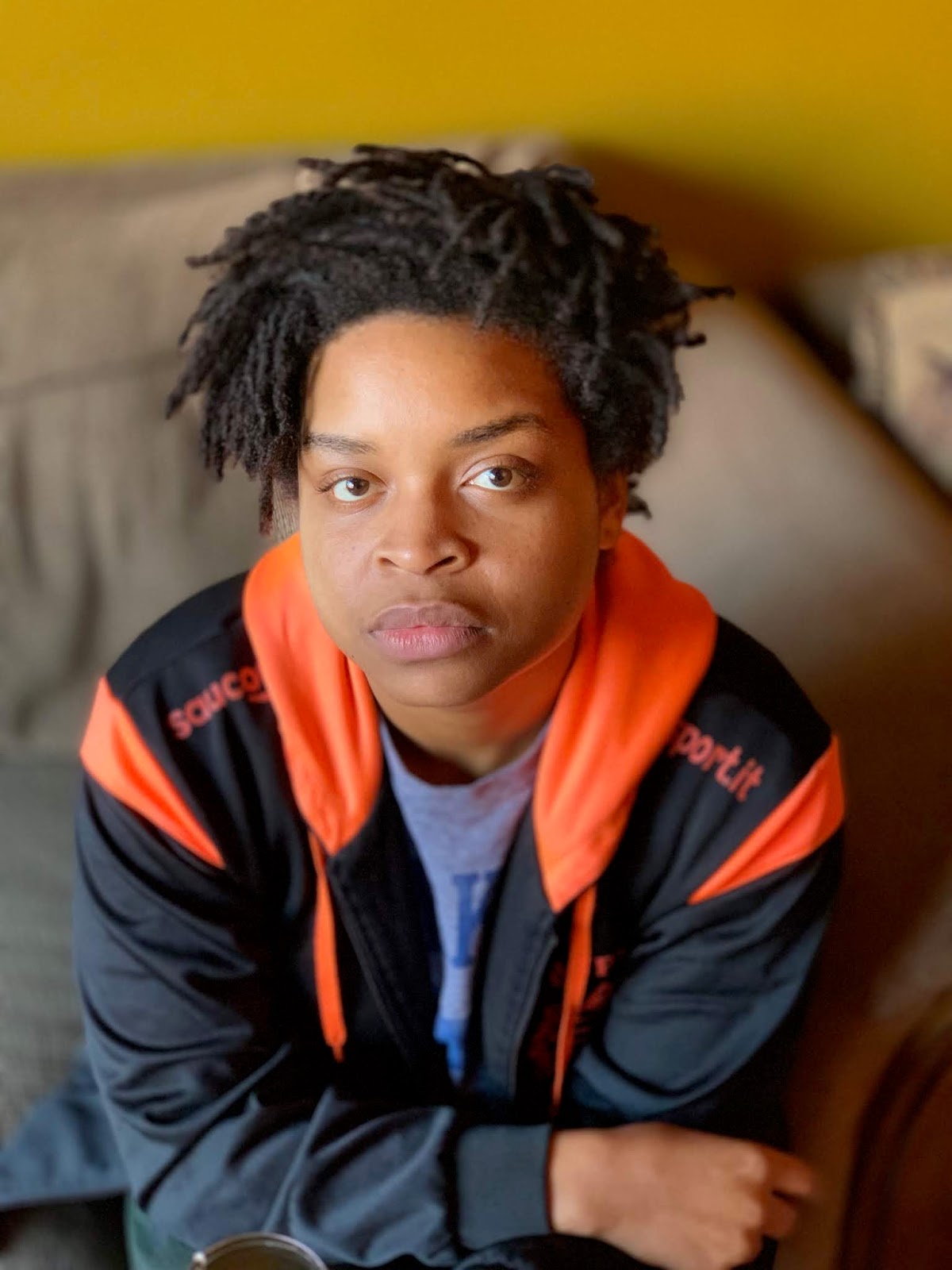 Chanel Chiffon Thomas’ self-portrait, “Colossians 3:9” shows the artist as a split being. Thomas strikes a stately pose, arms akimbo, staring straight at the viewer, as if daring you to meet their eye. One half of their body is dressed in pants, while the other wears a satiny fuchsia dress, the draped fabric hanging off the canvas. Their bare chest is rendered in contrasting planes using Thomas’ signature embroidery thread. The twenty-eight-year-old artist, who identifies as queer, is constantly investigating how they want to identify and present themselves to the world. This oversized painting shown in their January solo show at Goldfinch Gallery takes that internal questioning and puts it on display.

Although born and raised in Chicago, Thomas is living outside the city for the first time, as a first-year master’s student at the Yale School of Art. The move has created space for more introspection in the artist’s life and practice, as evinced in the work at Goldfinch, which was all made in 2018. 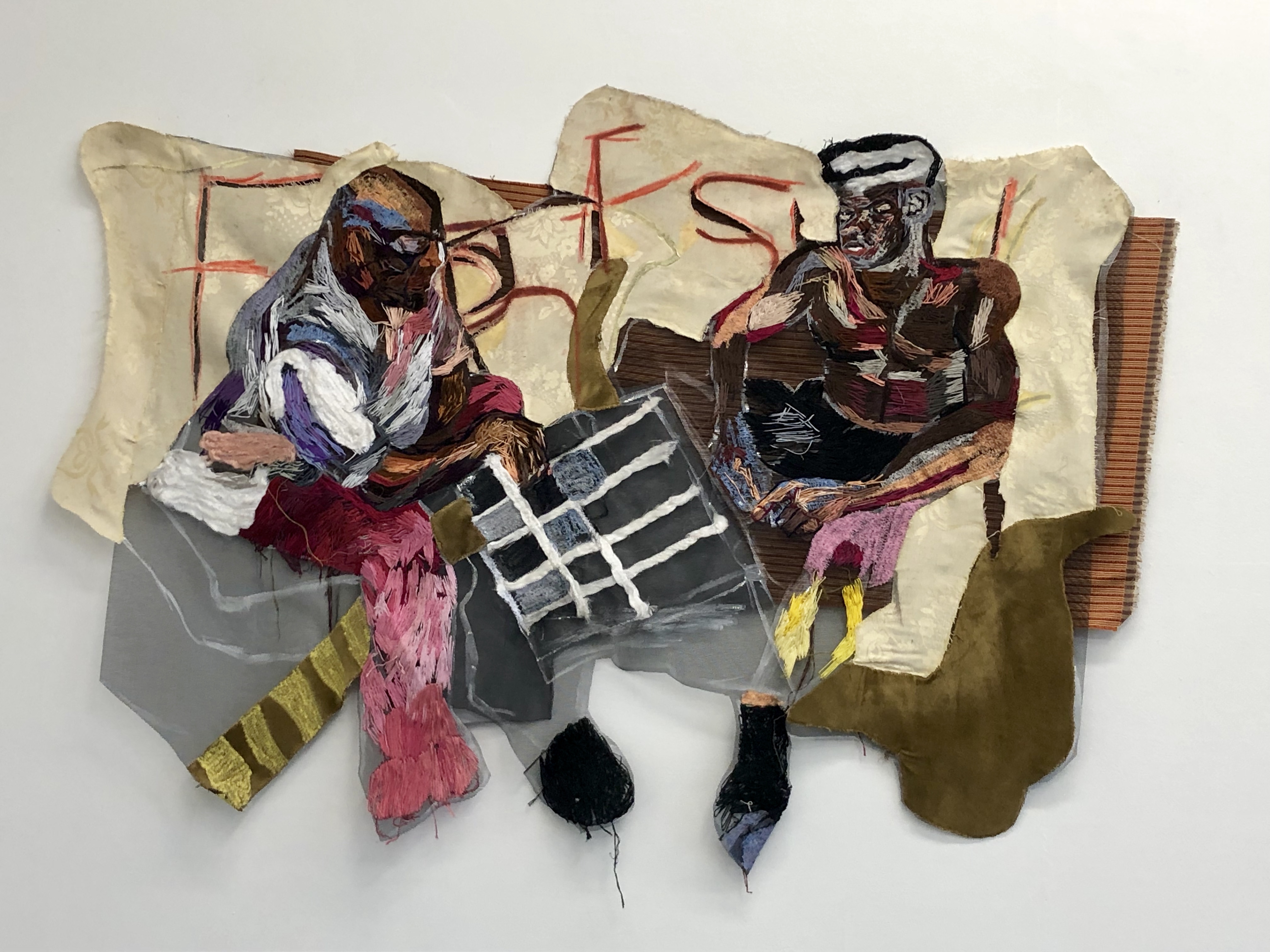 “I’ve been able to move and be in a new space where I can rebuild myself, that alone has been visually playing into the work,” Thomas says.

Their artwork is inherently personal, capturing moments from their own life and that of their family, and also drawing inspiration from Chicago. “That’s where a lot of the colors come from, even the rugged tactileness of it. The way that concrete breaks down on a wall,” Thomas says. “I love that kind of stuff: brick patterns, stuff that’s real urban. It naturally ends up in the work.”

This interest in using tactile materials has manifested recently through the use of window screens, found fabrics, used Bibles and foam. Thomas, who primarily embroiders and uses paint as a secondary medium, likes to make work as three-dimensional as possible. This year they have begun a series of African-style masks, juxtaposing used and new fabrics sewn together to create facial planes and features.

“I like to blend those two together—that kind of manufactured fabric with something that’s a little bit more personal. It creates some kind of harmony,” Thomas says. 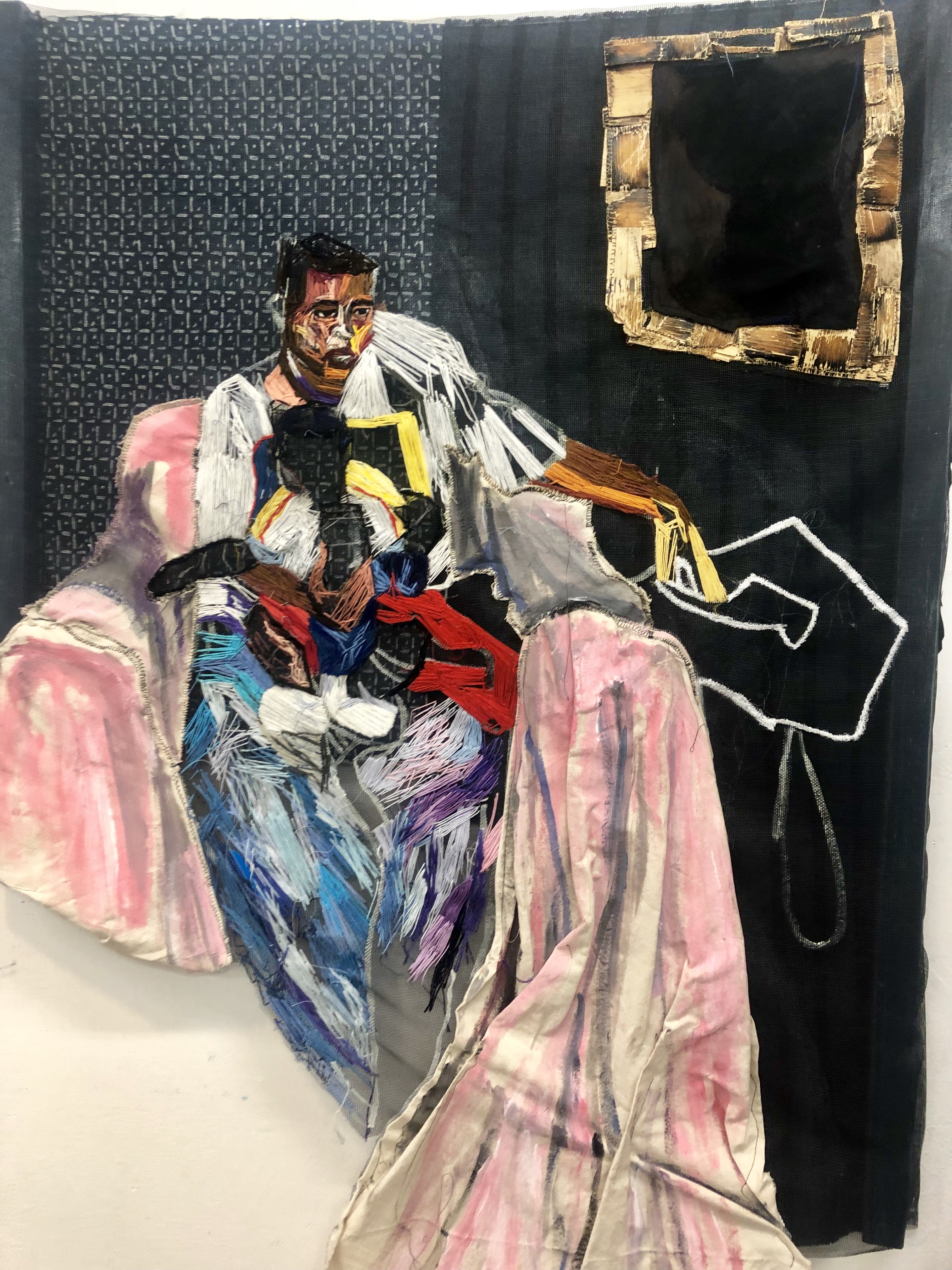 Chanel Chiffon Thomas, “A mother who had no mother,” 2018, embroidery floss, acrylic paint, and canvas on window screen, 44.5 x 57 inches/Courtesy of the artist

It still surprises Thomas that they are working as an artist. It wasn’t until their senior year at King College Prep that they even took an art class. Their teacher, Ms. Chun, assigned a project using embroidery thread, which Thomas hated at first.

“I just thought it was so weird,” Thomas says. “It was a real challenge. I attempted to do it three times and I couldn’t. But I just said I was going to break down the colors how I saw them and when I could do that, I made a bunch of them. And then that got me into the Art Institute. That one project. That’s crazy. I don’t know what I’d be doing if I didn’t get that opportunity to work with her.”

Thomas doesn’t have a solid vision of what life will look like after Yale; they just care about being able to do the work, and are grateful that anyone is interested in it.

“It’s so weird that people are interested, you know? But artwork really moves people, just like music does. It’s so strange to think that it has so much power, and I don’t have to be a CEO of some kind of a company to have power.” (Kerry Cardoza)