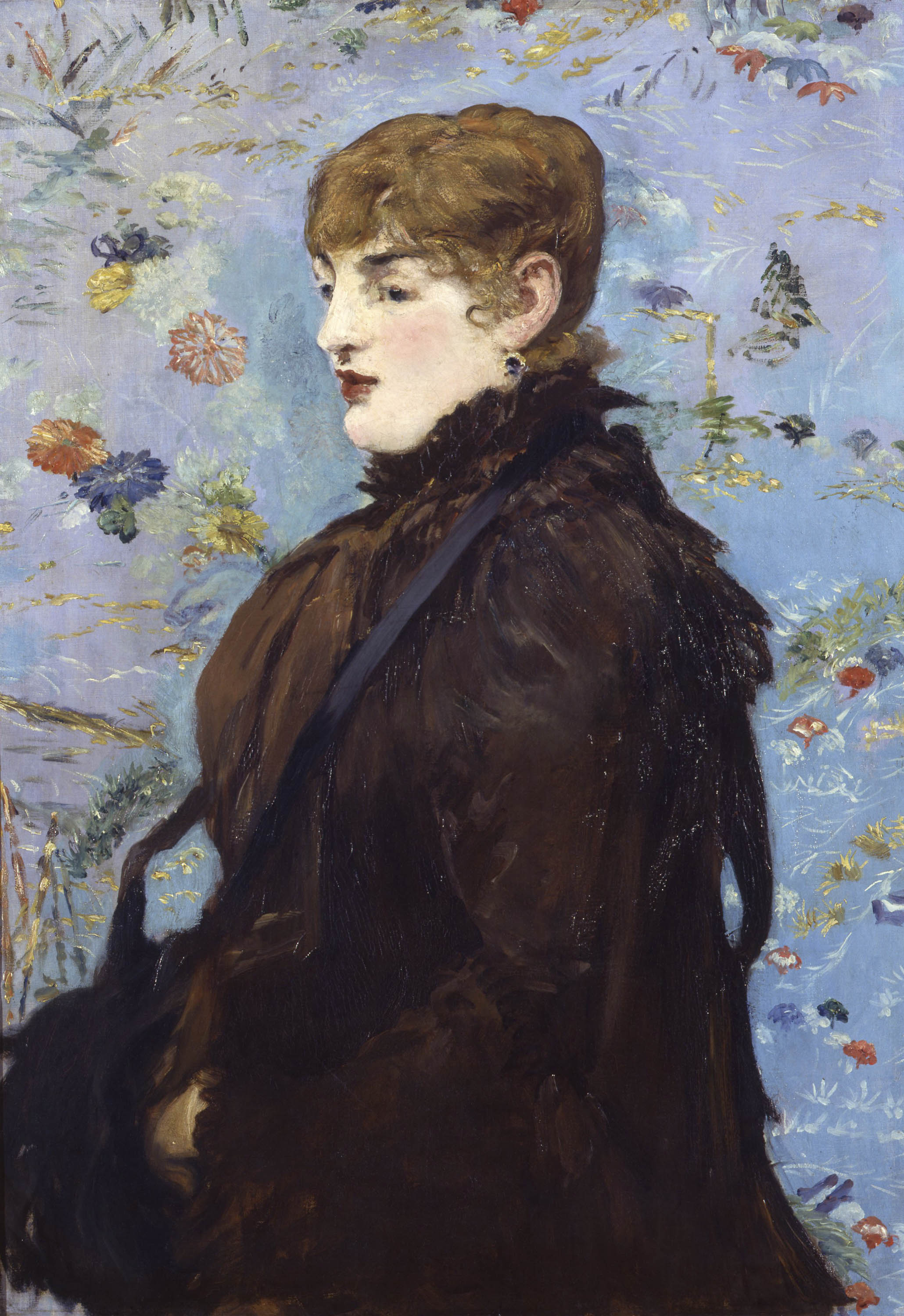 Although Édouard Manet does not fit neatly into the Impressionist canon—in the way that Monet, Renoir and Degas do—the Impressionists owe him a debt of gratitude. Manet is often considered “the bridge between Realism and Impressionism.”

Manet spent the last years of his life painting, not in the open air, as did so many Impressionists, but indoors. He was not well, perhaps suffering from locomotor ataxia, a side effect of syphilis.

After Manet lost the ability to travel far, models came to him to sit for paintings. Some of those paintings, many unfinished at the time of his death, are the subject of “Manet and Modern Beauty” opening at the Art Institute of Chicago May 26.

We sat down to discuss Manet and the upcoming exhibition with Gloria Groom, chair of European Painting and Sculpture at the Art Institute of Chicago. I asked Groom about the challenges of mounting a show like “Manet and Modern Beauty.” Turns out, a big challenge is to come up with a thesis, usually suggested in the title of the show, like “Manet and Modern Beauty.”  Of course, there are many other challenges along the way, and one of the biggest is getting museums and others to agree to send their highly valued works of art to the Art Institute. 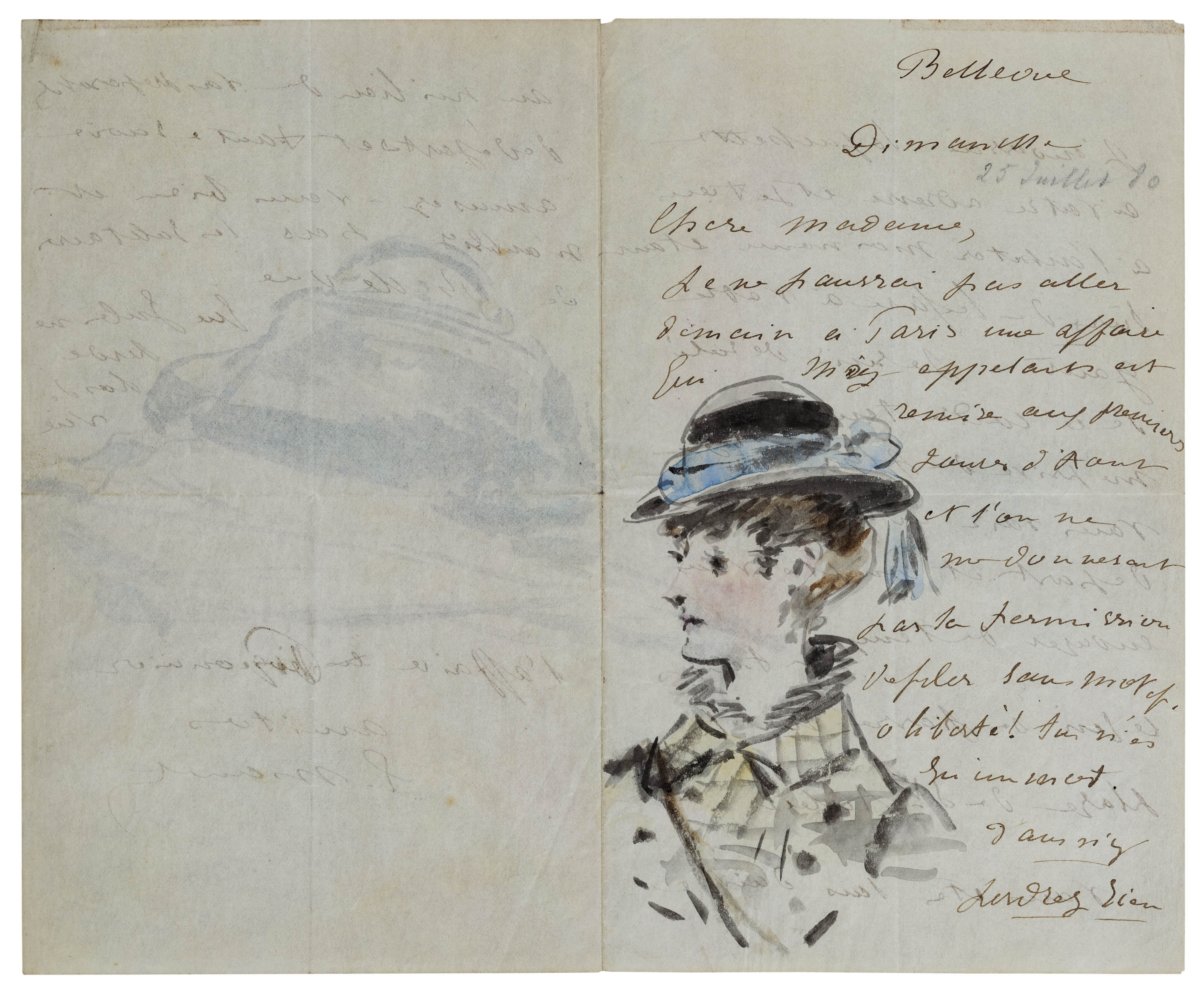 Édouard Manet. “Letter to Madame Jules Guillemet, Decorated with a Portrait and a Still Life of a Bag and a Parasol,” July 1880. Private Collection. /Image: Saint Honoré Art Consulting, Paris

“You’re dealing with real people, private collections, institutions in far-off countries, all over the world,” Groom says. “How do you convince someone who doesn’t want to lend? Some small museums are like, we can’t lend, because ‘If we lose this, we don’t have anything to replace it.’

“It’s always a challenge, and sometimes you must make trips. You don’t just write to them [potential lenders] and say, ‘This is what we want.’ You need to go to the museum, for instance, and tell them why we want their piece in the show. We explain to them and ask about what projects they might have in the future that we might help them with. We help each other out.

“With private collectors, you never go directly because you’re not supposed to know about them. They’re anonymous. So, you have to find somebody you know who knows the collector, and you call that person and they pass the request along. They don’t ask for compensation. No, no, no, no, no. Never. For them, it’s the thrill of having their artwork in a larger context to give it meaning they may not have understood. I mean, that’s why it’s so important to have a good thesis because when you go to collectors, you can’t just say, ‘We’re doing a Manet exhibition and we really think your painting is beautiful and we can’t wait to see it on our walls.’ You’ve got to have a cogent argument. You need to have a thesis for the show.”

There’s a widespread curatorial community, national and international, that communicates, makes deals and updates one another on developments at their galleries.

The idea for the “Manet and Modern Beauty” show came to Groom after the curator at the Getty in Los Angeles called her. The Getty curator told Groom they’d just acquired “Jeanne,” a painting of actress Jeanne DeMarsy that was first displayed at the 1882 Paris Salon, one of the last shows of Manet’s career. “Jeanne” was intended to represent springtime; Manet had another painting to represent autumn, but he died before he could finish winter and summer. The Getty curator was excited about this acquisition, which was sold for a feather over $65 million.

“He called me very triumphantly,” Groom recalls. “It’s a painting I’ve lusted after for years and years. It was definitely beyond our price tag. And he called me, and I was like, okay, ‘We’re going to do an exhibition around it.’ And I thought we’d do something pretty small, but then we started thinking about it, and it was like, this has not been done. Let’s explore some of these things.”

One of the main things that Groom wanted to explore was the concept of modern beauty, and how it was portrayed in the late works of Manet. Looking at “Jeanne,” I was struck by the sobriety of the subject. We Americans may smile too much; nothing wrong with being in a good mood, of course, but a smile for us is almost reflexive. Sometimes it doesn’t even signal that we’re happy. The female subjects of Manet’s late period are uniformly stone-faced, beautiful, but betraying no affect, inscrutable, detached, almost disconnected from the people and things around them. Groom points out that the lack of a smile is typical of Manet and others in his period.

“You’ll never see somebody showing their teeth. Think about ‘Olympia’ [an earlier Manet painting of a naked woman, reclining on a couch, looking out imperiously at the viewer] and everything he did before,” she says. “The models have a distanced kind of look, distracted maybe, even disengaged quality to them. And that’s very much Manet.”

The fact that the profile of the sitter is set against a decorative background tends to “flatten” the image of the woman, making her almost “part of the wallpaper.” As Groom explains, the subject’s “personhood is completely obliterated by the profile, which you get a lot later in modern art.”

For such reasons, Manet is sometimes considered the first modern artist. He’s painting around the same time as Impressionists, and using some Impressionist techniques. His paintings, however, reveal a realism not found in many works of his contemporaries. 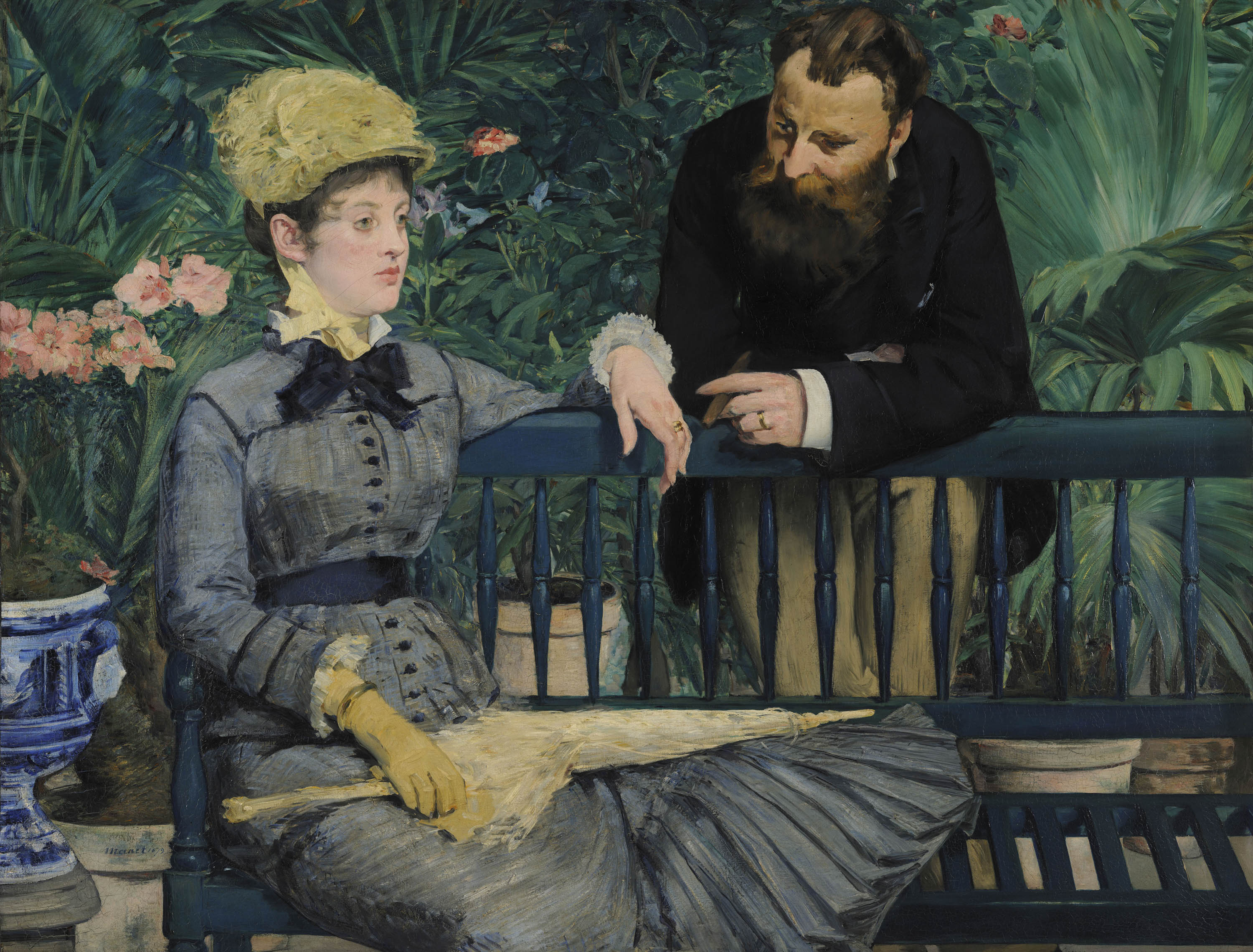 “In the Conservatory,” another featured painting ,also portrays an enigmatic female. The visage of the woman in elegant attire, with an umbrella resting on her lap, betrays no emotion, no clue as to what’s in her mind. I say this as a male, so maybe I’m missing something subtle, but the painting was by a male, so maybe it reflects Manet’s own uncertainty.

The intent of the male in this painting seems unmistakable: he’s beseeching the woman, his hand almost touching hers. What exactly he’s beseeching her about is not known.  They both wear wedding rings on their almost-touching left hands.  Whether they are married to one another is unclear. A conservatory is a public place where a private rendezvous could be arranged.

Whether husband or suitor, it’s possible the woman in this painting is simply bored with it all. Some critics have suggested the rungs on the long chair she sits upon are reminiscent of prison bars, and it’s hard to imagine any place as boring as a prison, whether one constructed of steel bars or inflexible social norms.

In many of Manet’s paintings, it’s the man who is active and the woman who is sedentary, almost passive, submitting to what’s going on if not, perhaps, all that happy about it. She’s been put in this situation, and she’s dressed for the occasion, but damn if she’s going to pretend she’s enjoying it.

One of Manet’s most famous paintings, “A Bar at the Folies-Bergère,” (which will not be in this show) shows a woman whose stoic expression borders on sadness, turning back the gaze of the viewer. In the mirror behind her, we see her back, and we see the object of her total lack of interest: a man who is trying to engage with her. She is impassive, expressing no interest or inclination to respond; he leans in (we see him in the mirror). She, like the woman “In the Conservatory,” is trapped, this time behind not wood or metal bars but the liquor bar, serving drinks, looking out at the world of the club, which we as viewers are vicariously situated within. Her stolid demeanor pushes back against the gaze of the audience.

Perhaps the relatively flat expressions of Manet’s models reflect a modern social norm that Manet was attempting to capture.

“Manet was painting ‘La Parisienne.’ It’s a type, and that was his goal,” says Groom. “He wanted to paint the types of Paris, the women of Paris in the 1880s. She’s a fashionista; she needs stuff, she wears fine clothes. She looks like she may be married, but she also looks like she could be single. This type of chic had allure for Americans, like Henry James, you know.” 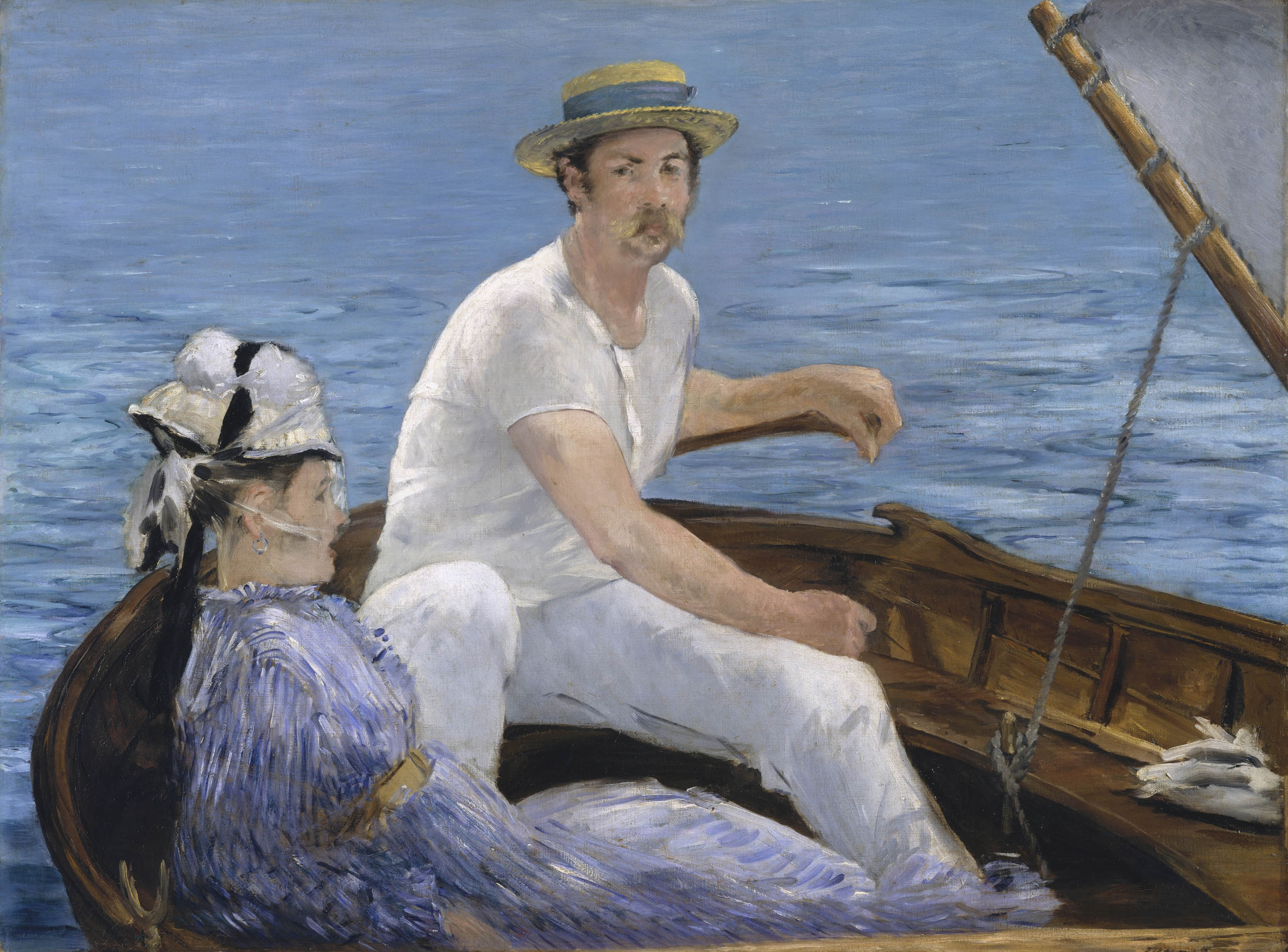 Manet’s “Boating,” with a composition thought to be inspired by Japanese prints, is more decidedly Impressionistic than “In the Conservatory”: an outdoor scene, seemingly un-posed, with tight, energetic brushstrokes, it captures an ephemeral moment, much as did the cameras that were coming into vogue.

As with “In the Conservatory,” the man seems to be in charge, literally at the helm, and the woman seems to be looking at something, anything, rather than the man. The man’s head, however, is at the apex of a compositional pyramid and so draws the eye of the viewer. His passenger, on the other hand, seems to be astrally projecting herself to a planet far, far away. She’s mentally elsewhere, almost as though she’s saying, in body language, “I’m here… but I’m not here.”

“Boating” represents a theme in Manet’s work: the tug between the public and the private. Both the man and woman in this painting are in a public space: the man, however, is making eye contact with the viewer while the woman is off in her own private space.

The Artist We Think We Know

“Boating,” “In the Conservatory” and “Jeanne” are all on exhibit in “Manet and Modern Beauty.”  “This is part of what I think is so exciting,” Groom says. “Instead of it being an exhibition where everything looks like it has the same surface, you go from small portraits to big. You see the difference between a salon exhibition piece [“Boating” is about three-by-four feet] and small, sometimes unfinished pieces that almost look like they’re one-offs, pieces that are much more intimate, much more what he did when he wasn’t thinking about the public reception.” [“Jeanne” is about thirty-by-twenty inches]

Another example of intimate communications are Manet’s personal letters, also in the exhibit. “The letters are not like those of Van Gogh. They’re not like ‘I’m going to pour my awkwardness out for ninety pages every day to my brother.’ Manet’s letters are from a man who’s going to keep his chic charm and who’s not going to let people know that he’s got these [health] issues. But he needs to communicate, so he’s sending almost little snapchats to people, you know? ‘Oh, get in touch, send me some paper, please come visit and wear your pretty hat.’ I mean, they’re very, very upbeat and at the same time you can tell that he’s longing.

“It’s a communication, but what we also found out, and I think it’s fascinating, is that sometimes he does watercolors on the letter paper, which look very breezy, but he retraces them in a very calculated way onto a piece of paper that he’s going to use for the letter. We’ll show that process with the digital display because you’d kind of need to have somebody explain it to you.”

So what makes “Manet and Modern Beauty” an important show? “Toward the end of his life, when Manet was contemplating where his major works might be seen together, he said to his friend [French journalist] Antonin Proust, ‘I must be seen whole.’

“With this exhibition focusing on late works, on works expressing Manet’s private and public vision, with works that reveal a surprising repertoire of media, we are able to add the missing piece to a ‘whole’ understanding and appreciation of the artist we think we know.”