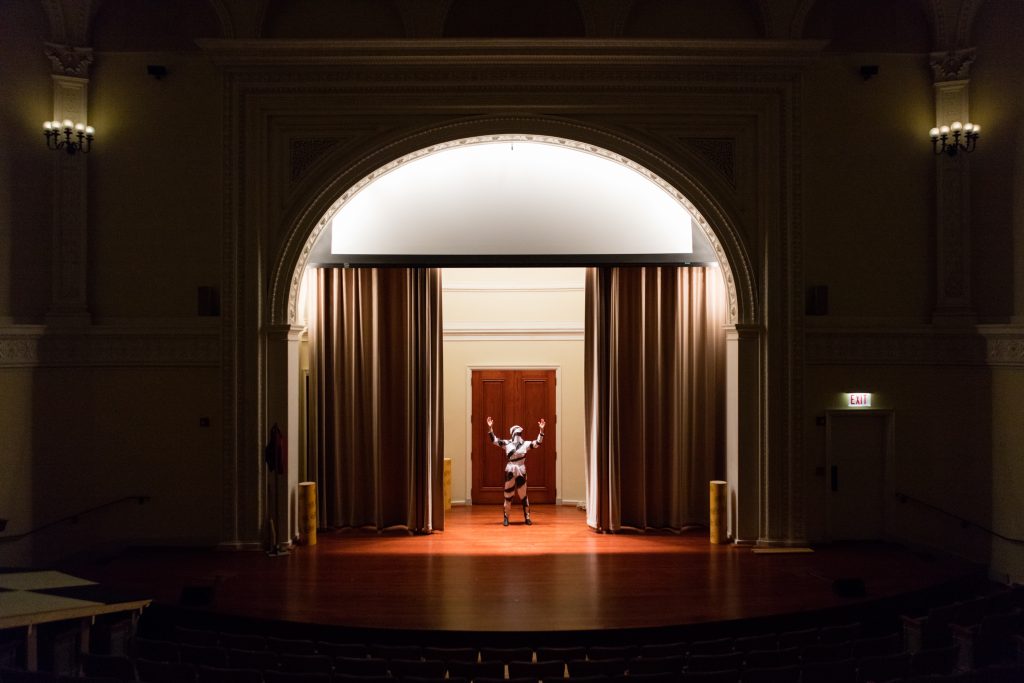 “This is not a dream” (2017) by Every house has a door, directed by Lin Hixson. Pictured: Elise Cowin/Photo: Aidan Fitzpatrick

When I stand in the entry hall of the Chicago Cultural Center’s exhibition room, where “goat island archive—we have discovered the performance by making it” is on view, I see two walls angled toward each other. One contains a screen playing archival interview footage of Lin Hixson, Goat Island’s director. The other white square wall contains mirrored letters that spell out “goat island archive.” The letters are too high to see your own reflection in, or maybe I’m just too short, but when I stood up on my tiptoes and came back down, the light sparkled on the surface of the letters.

“The first visual is important,” Hixson, now the director of “Every house has a door,” says. 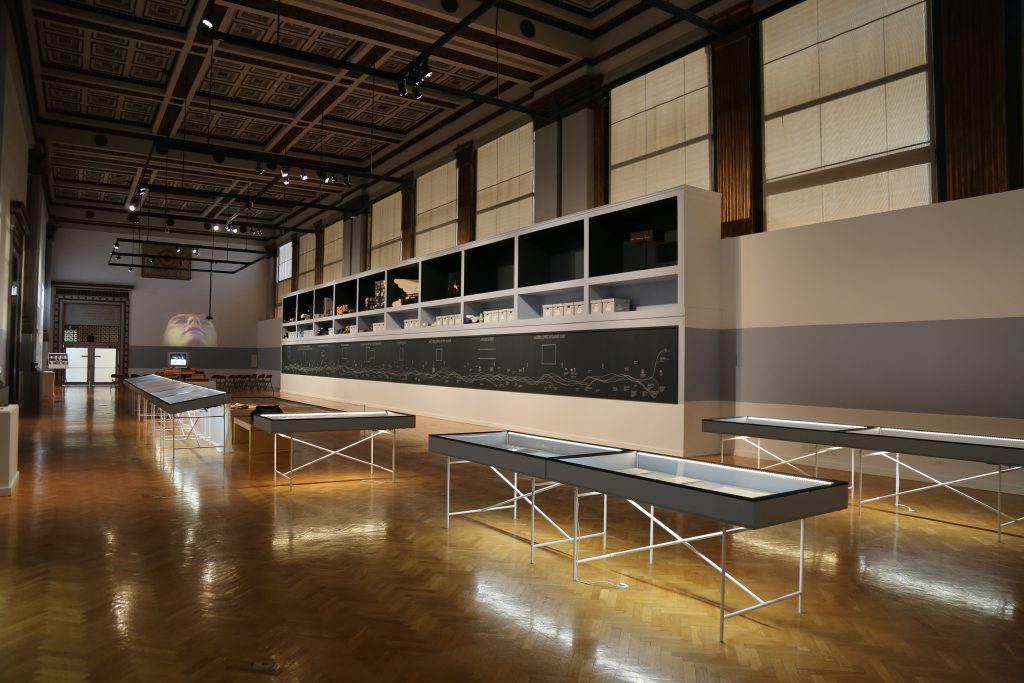 goat island archive—we have discovered the performance by making it; Chicago Cultural Center 2019. DCASE/School of The Art Institute Of Chicago, Libraries and Special Collections/Photo: N. Lowe

The first vitrines of the gallery are dedicated to Goat Island’s final performance, 2007’s “The Lastmaker.” I look down behind the glass, and pinned to a gray surface, is a small square of paper that was passed out to the audience of this performance:

“The Lastmaker, our ninth performance, will be the last Goat Island piece. After we have completed creating and performing it, the company will end. This decision comes from the challenge that all artists face—how to continue to grow. We end Goat Island in order to make a space for the unknown that will follow. We intend this ending to present itself as a beginning.”

After twenty-one years of performance-making, Goat Island ended with the question: How do we grow?

A year later, in 2008, two founding members of Goat Island, Hixson and Matthew Goulish, created the Chicago-based performance collective “Every house has a door.” Goulish, the group’s dramaturg, described the structure of “Every house” as a conscious move away from the fixed-ensemble structure that Goat Island used. “With ‘Every house has a door,’ we’re doing project-specific pieces with different specialists brought in,” he says. This loosened structure, where Goulish and Hixson are the only regular members of the collective, increased the range of possibilities. “The different members we brought in could allow for pieces where we can orchestrate different kinds of moments and that are radically different from one another.” He describes how these performance situations and collaborations with different kinds of practitioners make work that, to them, can have a heightened ability to respond.

Any short survey of “Every house” shows how this is very much the case. In 2014, the company produced “Caesar’s Bridge,” on invitation from Julius Caesar gallery. For the piece, they collaborated with sculptor Ilie Paun Capriel to create a platform and stage where audience members sat underneath, their heads popping up through cutout holes as they peered above at Goulish, the sole performer of the piece, who punctuated his delivery of a text on Caesar’s crossing of the Rhine River with a silent, directional dance. In 2016 “Every house has a door” choreographed cars for the conclusion of Trunk Show, a roving gallery in the form of a 1999 Ford Taurus owned by Raven Falquez Munsell and Jesse Malmed. In 2017, “Every house” responded to the poetry of Jay Wright with “The Three Matadors,” a staging of Wright’s micro-play of the same name. “This is not a dream,” from 2017, was a site-specific piece created for the Art Institute of Chicago’s Fullerton Hall, where they built a sloping stage atop of several rows of the auditorium-style seating.

The group’s responsive approach stems from their desire to shine a light on so-called neglected subjects. “It makes the work about something in the world rather than a product of our imagination,” Goulish says. But it would be incomplete to suggest that their performances merely serve as loudspeakers for the material they engage.

“The choice of people we work with allows the source material to hybridize in relation to other practices,” Hixson says. She cites the example of the rock band Joan of Arc who responded to the poetry of Charles Reznikoff in “Testimonium.”

“The performance contains the band’s work in a way that is very specifically about their practice and concerns. So the performance becomes about bringing together our own practices, our own thoughts, and our own ways of working to sit alongside the work of someone like Charles Reznikoff or Jay Wright,” she says. “It’s not really about an analysis or amplification, but about resonances that are happening with the performance. It becomes bigger than any material.” 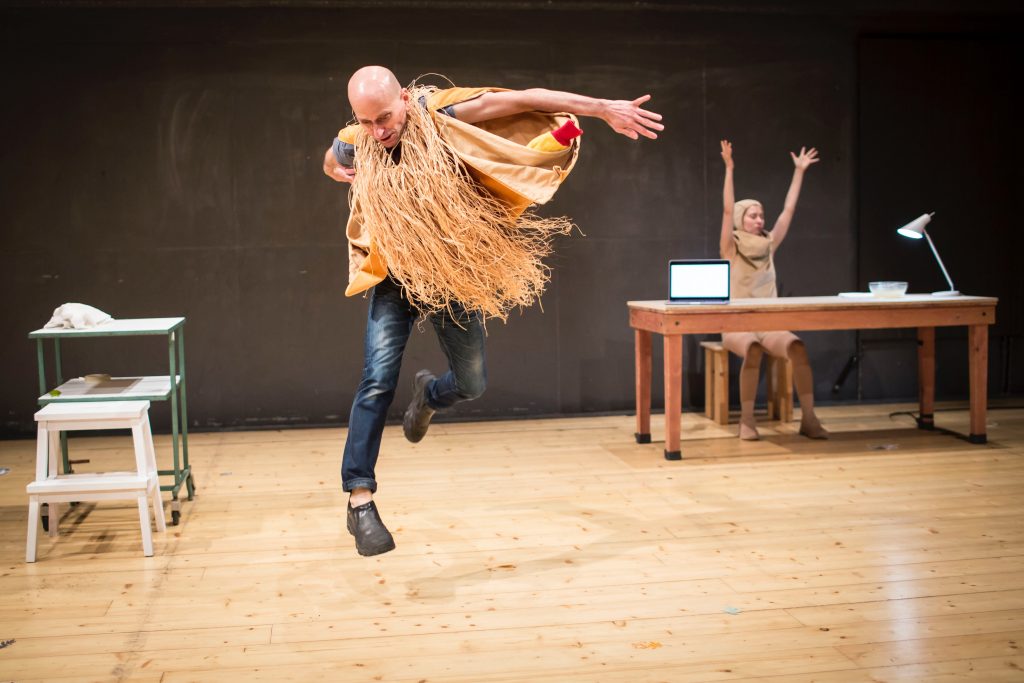 Most recently, 2018’s “Scarecrow” was a collaboration with the Finnish performance artist Essi Kausalainen and features three children. The piece was developed after Hixson and Goulish invited Kausalainen to join them at the Rauschenberg Residency on Captiva Island.

“She arrived in Florida thinking about snails,” Goulish says. “She was thinking about slime as an independent entity, so in the end, we had a slime solo, and we were all stagehands for the performance of the slime.”

Kausalainen’s performance practice often incorporates clothing and object-making. In “Scarecrow” she performs wearing a baggy, hooded beige onesie as she lay on her back on a small wooden dolly. Over her body rests a small stool. On the stool is a bowl of slime. Her arms are outstretched, and her knuckles probe the floor ahead of her—slowly making her way through the space until she reaches a table. Hixson and Goulish call it her “snail dance.”

“She’s interested in the vitality that happens between the coming together of the human and the nonhuman, getting somewhere within the continuum of the human body and the material or nonhuman body,” Hixson says.

In particular, he was thinking of Alva Noë’s book of philosophy, “Strange Tools.” “Noë says the scarecrow is an instance of interspecies communication between the farmer and the crow, and that just sort of stayed with me,” he says. “I began thinking about scarecrows from the Pink Floyd song to the ‘Wizard of Oz.’”

While Kausalainen, the snail, inches along the stage, Goulish carries markers of the scarecrow—at one time donning a raffia cape and dancing to “If I Only Had a Brain” and at another distributing paper leaves (which are part of Max Guy’s ongoing “What’s Outside” project) across the stage or jumping as high as he can and slapping them to the wall.

“We just started assembling this performance about this snail and the scarecrow,” Goulish says. “At first it didn’t really make too much sense in anything other than a musical or impressionistic way.”

I couldn’t help but ask: How do you know when a performance is working?

This answer mostly relates to Hixson’s approach to direction. “As we make a performance, I like to peel away everything that doesn’t surprise me or that I understand. And then I’ll start accumulating those things that I don’t expect together,” she says.

But a question about directing is really a question about what a performance should do. “We’re discovering how the performance thinks—it thinks on many different levels—and it’s finished when I feel there’s a sense of something continuing,” Hixson says. “The piece is moving horizontally and vertically at the same time. Horizontally it’s moving through time, but vertically if you stop at any moment, it needs to be resonating in that it opens up a gap that holds all the things that are moving through the performance.”

“Every house has a door’s” fluid approach to creating performances thus created a practical problem. “It stumps people,” Goulish says, “because you don’t know how to ‘brand’ this methodology.” There’s no way to describe their work other than to describe individual performances—which all differ radically given consistently changing contexts and collaborators.

“It stumps us too, because each piece doesn’t prepare us for the next,” he says.

It’s a problem that’s not a problem. Instead it reveals what is at the heart of their work. The performances created through “Every house has a door” all seek to do something for everyone in the room—the neglected material that they are engaging, the performers and the audience. This activity resists description as though it were finalization, when what they’re really after is continuity.

“There is a kind of warp to the representation of our material that is meant to offer a continuation of the work among a new channel,” Goulish says. “Because of that warp, it creates a sensation of introduction or re-introduction—even if you’ve already encountered it.”

“How is the work going to continue in the space between the performance and the audience?” Hixson asks. “That, for me, is hospitality.”

For that reason, Hixson thinks a lot about chairs. “Every house” doesn’t typically work in theater environments, so seating often becomes part of their considerations. “For me, it’s important that the audience being able to see, and chairs interfere with the first visual when you walk in the room,” she says. “What does that do when people can’t see the work?”

Hixson and Goulish approach their relationship to the audience delicately, because they view their positions as one of responsibility. Perhaps this is because they are both teachers and—although they recognize the stakes are not exactly the same—their teaching, performance and dramaturgy inform each other.

“Directing and teaching have a lot of responsibility because you always have the last word,” Hixson says. “With human lives in the classroom or on the stage you are dealing with issues of power, and you have a responsibility. I find it terrifying. It’s not like brain surgery, although it’s more that way in the classroom—people have been truly damaged by experiences they’ve had in classrooms.” 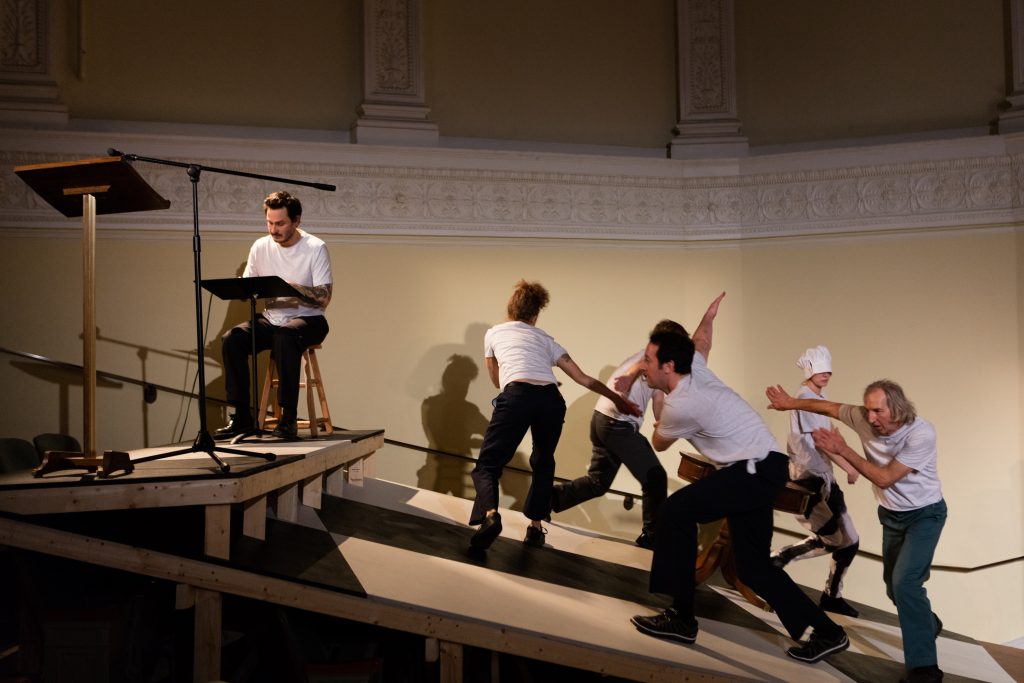 The emphasis on hospitality distinguishes “Every house has a door” in the way that they seek to challenge themselves, their collaborators and the audience in a way that does not cause undue irritation or harm. “How do you set a place of hospitality where people can continue and sustain their practice—whatever that looks like?” Hixson asks.

But this hospitality radiating outward from a performance also reaches within it, which is clear in how Goulish describes his approach to dramaturgy. “It has a lot to do with the individuals in a work being something more than their ordinary selves,” he says. “It isn’t about acting, but it is about something. It’s an opportunity for a valence of your existence to present itself. It’s very much you and it’s very honest, but it never presents itself otherwise.”

“Every house has a door” does not inhabit a world where these are answerable questions. Instead, they keep these questions alive, reorienting them within each performance. By shifting and allowing the viewer to shift, they are forever encountering these questions anew. (Fulla Abdul-Jabbar)

The exhibition “goat island archive—we have discovered the performance by making it” is currently on view at the Chicago Cultural Center until June 23. Every house has a door’s most recent work, “—recline somberly like fallen heroes—,” featuring New York-based collaborative duo Millie Kapp and Matt Shalzi, is a performance in response to the exhibition “Collapse” by Matthew Metzger and will premiere on May 31 at Regards.