“The playground for experimental art is ordinary life,” Allan Kaprow, the late American performance artist, wrote. In the late fifties and early sixties, Kaprow was known for staging “Happenings,” interactive and participatory events meant to break down the boundaries between art and life, between artist and viewer. Kaprow’s artworks led participants through a variety of activities—from the bizarre (licking jam off a car) to the poetic (walking on another person’s shadow)—but all were readily accessible to the public. By taking art out of the white cube and engaging the audience in creating the work, Kaprow succeeded in what museums and other institutions continually strive for: to engage a broad audience, to inspire, to create meaningful connections, to understand the value of art in everyday life.

These were some of the aims of Chicago’s 2017 Year of Public Art, an initiative which invested over one-million dollars in new art projects in each of Chicago’s fifty wards. Some were temporary—biodegradable sculptures by Jenny Kendler, a performance by Erica Mott, storefront signage by Alberto Aguilar—and many projects were murals. It was an ambitious project, to be sure, and the diversity of the participating artists was commendable. But while Mark Kelly, the commissioner of Chicago’s Department of Cultural Affairs and Special Events, admits that public art can “spark dialogue and even controversy,” the goal of most of the 50×50 Neighborhood Arts Project contributions seemed to be to beautify the spaces they are within. Not that there’s anything wrong with beauty—or the desire to add color or aesthetically pleasing elements to a park or an El station. It’s just that we could ask so much more of our public art.

One spectacular example is the recently announced “Our Destiny, Our Democracy,” a public monument honoring Shirley Chisholm that will be erected in Brooklyn’s Prospect Park. The monument to Chisholm, the first black woman to serve in Congress, was designed by Chicago artist Amanda Williams and the New York-based Olalekan Jeyifous. The project was funded by She Built NYC, an initiative that seeks “to correct the gender imbalance in the city’s public art and monuments.”

Chicago shares this problem with New York and other major cities. As WBEZ reported, Chicago doesn’t have “a single statue or bust of a historically significant woman in any of the city’s 580 parks.” The Washington Post reported that less than eight percent of public outdoor sculptures of individuals in this country are of women. 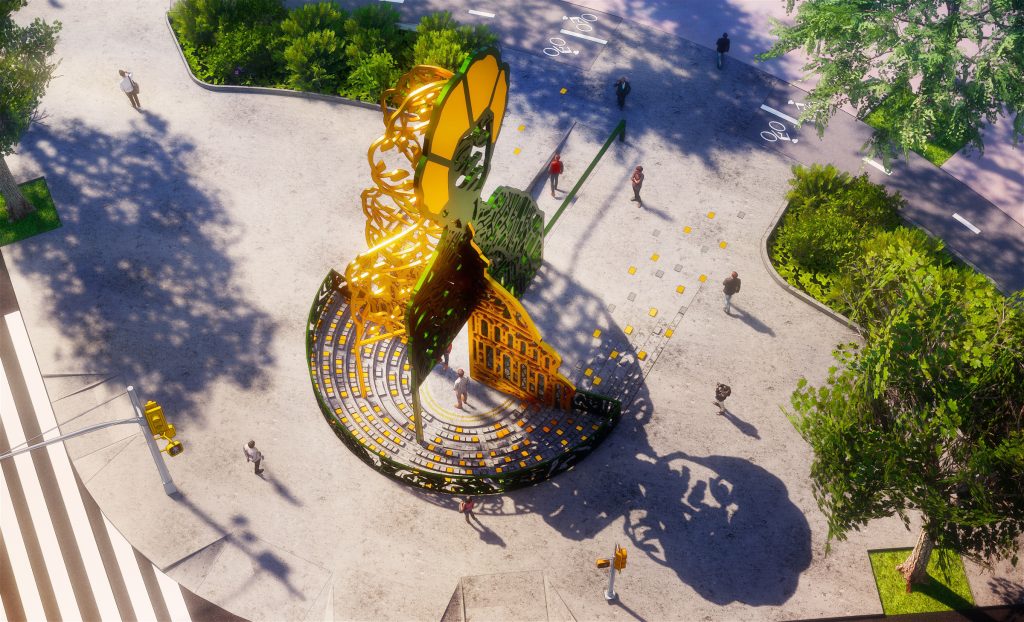 Rendering of “Our Destiny, Our Democracy,” courtesy of Amanda Williams

“Our Destiny, Our Democracy” will not be a traditional figurative statue. It will combine Chisholm’s portrait with a silhouette of the United States Capitol, as well as the outlines of leaves and vines. The monument is intended to reflect both the greenery of the surrounding park and the legacy that Chisholm left to our country’s democracy. Williams, a trained architect, is sensitive to the complexities of space and place, and how cities and neighborhoods are valued. She’s perhaps best known for her “Color(ed) Theory” project, which took South Side homes slated for demolition and painted them in the vibrant colors of cultural signifiers in those communities: Currency Exchange yellow, Flamin’ Red Hots orange.

Williams told the New York Times that the Chisholm monument is particularly meaningful during this moment in our nation’s history. “What does it mean to offer public art in this moment?” she posited. It’s a question worthy of constant investigation.

Public art, like art in any other context, works best when it functions on a level accessible to anyone, a tenet found at the heart of Kaprow’s work. And Kaprow’s inquisitive spirit lives on in the work of Williams, who clearly thinks deeply about the human connection in her work. Williams often uses everyday elements in her work, but puts them in a context where the viewer can’t help but see things in a different light. In “Follow the Fair Weather Roads” (2019), Williams painted cracks in the Smart Museum’s floor red, to shed light on Chicago’s history of “redlining,” which she describes as “the systematic denial of various services to neighborhoods and communities” in ways that were often racially motivated. In the 2017 piece “She’s Mighty Mighty, Just Lettin’ It All Hang Out,” Williams painted salvaged bricks from the city gold, raising questions about the value of neighborhoods left to deteriorate and what dreams are lost in the process. Williams can clearly conceive of great works for public enjoyment and thoughtful engagement. Let’s hope our own city thinks to make permanent use of the brilliance of this artist, while righting historical wrongs along the way.