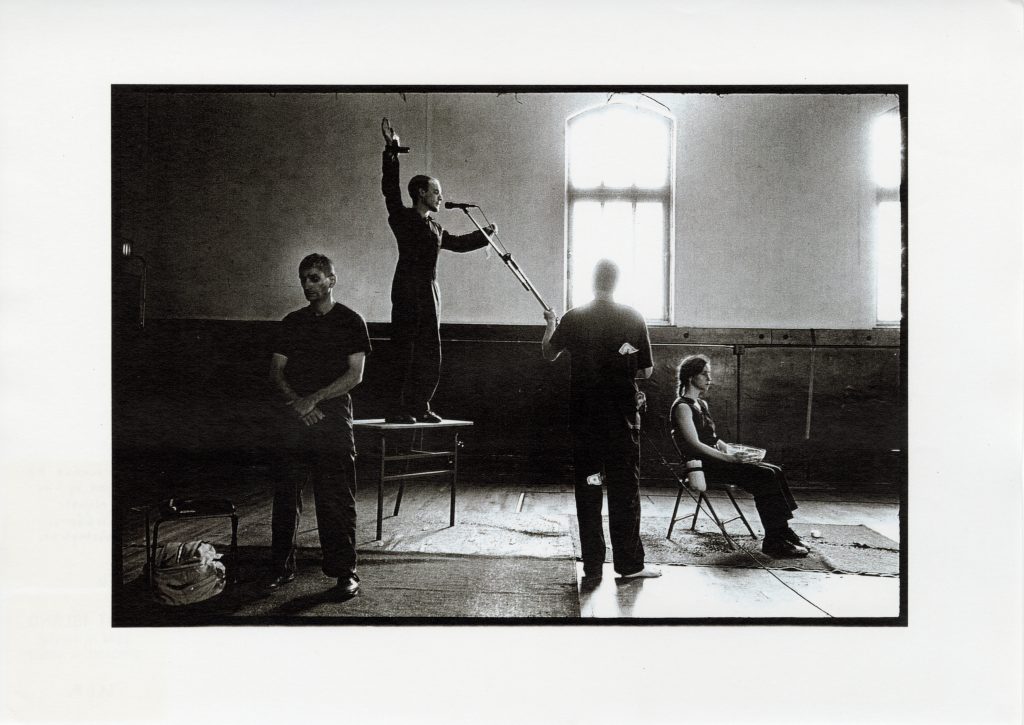 Mark Jeffery insists that his entire life has been an accident. If this is the case, then it is an accident from which Chicago and its performing community has profited greatly. He performed with the Chicago-based group Goat Island and its core members Matthew Goulish, Lin Hixson, Karen Christopher, Litó Walkey and Bryan Saner from 1996 through its final performance in 2009. As part of the 2019 Chicago Cultural Center exhibition focused on the Goat Island archive, “we have discovered the performance by making it,” Jeffery worked with curator Nick Lowe and registrar Sarah Skaggs to commission nine local, national and international artists and performance groups to develop work in response to each of Goat Island’s nine performances. He is co-director of the performance festival In>Time, and also teaches and advises at the School of the Art Institute. He is co-founder of the group ATOM-r (Anatomical Theatres of Mixed Reality), whose September 2018 performance “Rhinestone Cowboy” featured five cows on the 606 trail. Last year, Jeffery opened the performance space Ohklahomo in the basement of his Ukrainian Village home to showcase experimental works by both established and emerging artists. The next evening of performances at Ohklahomo is set for July 28, and will feature the jewels of performance that frequently come out of similar types of happenstance and accidents from which Jeffery hails. 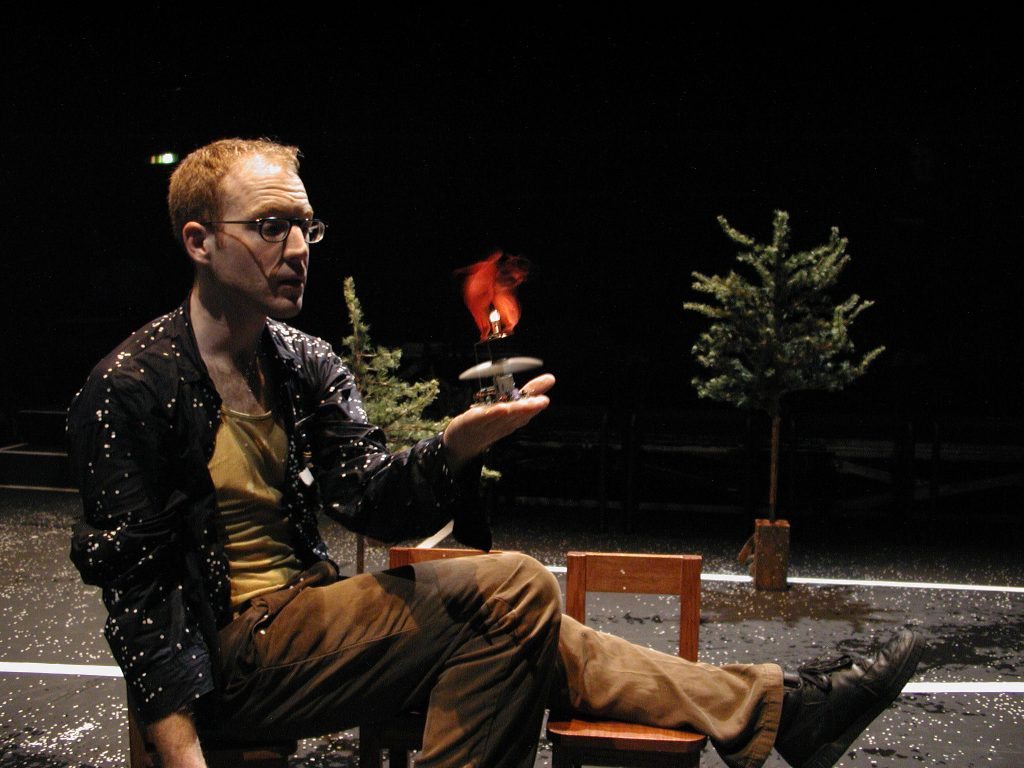 How did you begin working with Goat Island? Did your own process change after your introduction?

I’m originally from the U.K. and I went to Dartington College of Arts, which has a similar history to Black Mountain College, and I was the first cohort to go through a new performance art program called Visual Performance. There was a teacher—Sally Tallant, who is now executive director of Queens Museum—who told me that I should take this workshop with Lin and Matthew at the Arnolfini in Bristol. That was the first workshop, we realize now, where Lin and Matthew started to develop their pedagogy. That was really a turning point for me. It was allowing generative permission and allowing things to happen without them being shut down. The following year, Goat Island came back, and they performed “It’s Shifting, Hank” at Dartington. That was the first time I saw their work. Lin connected with me and we had this beautiful hourlong tutorial, and I remember her saying to me, your work is about fear and control and the domestic. It was so helpful to know that, just having those words be present. That opening to the work of Goat Island and to Lin as a teacher was so fundamental in terms of how to both ground myself and unground myself, as well as to churn and turn the possibility of what making could be. I was able to put material together in a way that wasn’t about stopping something, but about opening something up.

I did the first Goat Island summer school at the Glasgow School of Art in 1996. At that time it was a four-week workshop. I come home to Bristol, and I get this call out of the blue from Diana Warden, a programmer at the Arnolfini, saying Lin Hixson wants to talk to you and there is this opportunity for you to go to Chicago, because this Portuguese artist António Poppe, an MFA student at SAIC at the time in sculpture and also an amazing writer, had to pull out. I didn’t have a passport, I’d never left the country before, I’d never been on an airplane before, so suddenly we had to get a passport, suddenly these tickets arrived and then I was in Chicago meeting Matthew on September 4, 1996. The piece was over two weekends, late September through the first weekend of October at the [Wellington Avenue Church] Gymnasium, and I had to learn it. I don’t think that at that time we had any video footage. So—and this is so beautiful—it was about learning through other people of what this other performance, what this other person, was. And then in order for me to give me my own voice, Lin asked me to construct movements around creating an arrival and creating a departure, and this was my entry into the work.

I can’t emphasize enough the amount of nervous energy I had. I always performed without glasses. This is classic performance people—we’re willing to reveal and be so vulnerable and yet I had this thing so I didn’t have to see. And Lin was like, “I want you to wear your glasses.” I couldn’t figure out how to negotiate doing an activity while knowing I was being watched and could see people. And then Bryan Saner gave me a bike and each day I would bike a little bit further into the city because those buildings freaked me out, because I had never experienced that kind of scale before. It was very odd. All of a sudden I had to look up. It was a similar thing with performing. I had to look up. It was like fear and control: you have to keep trembling but see something.

After “How Dear to Me…” you continued to do work with Goat Island until the last performance in 2009. What does it feel like to see these re-performed by others?

What I’m loving about this show is that it’s not necessarily about reenactment. Having seen the Judson Church retrospective at MoMA, the Abramovic retrospective where you’re seeing this sort of reenactment, I’m realizing it’s much more about allowing the archiving to become alive. 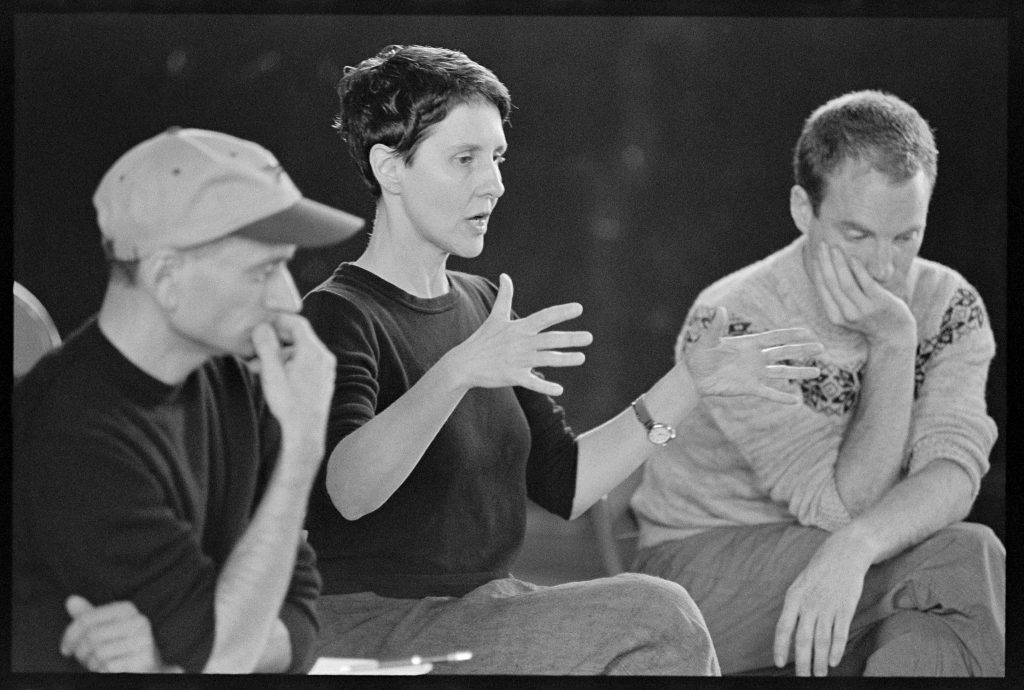 Mark Jeffery, Lin Hixson, and Matthew Goulish in conversation with the audience at a work-in-progress performance/discussion for “The Sea & Poison,” 1998/Photo: Nathan Mandell

“The Sea and Poison” was a piece created in part to respond to the question “How does one make an impossible dance?” What is different about the context of you responding to that question then, in the late nineties and BADco’s response through their work “Impossible Dances?”

Nick and Sarah gave BADco the work for “The Sea and Poison,” which was ephemera including digitized tape, scores and sketches of a piece of work we would take two years to make. We learned a total of nine dances with one-hundred jumps, which then got split up into all these different mathematical equations and that seemed to take forever. What was so beautiful about watching BADco is that they collapsed four people into one body, so they were making it even more complicated and this is why you’re like “Damn them!”

In preparation for the exhibition, and as part of your 2019 In>Time Festival, you brought all nine of these groups to Chicago for residencies. How do you feel Chicago, where so much performative work is happening, influences the work being done now?

The thing that’s interesting to me, having been here now for twenty-three years, is that in Chicago there’s not the market-force pressure of New York and Los Angeles. The thing about the Midwest, which I love, is the industrial nature of work, and working, and not being afraid to work. I think that’s the engine behind a lot of Chicago artists. What I’ve discovered is just that you do the work, whatever platform that is, whether it’s an amazing basement gallery or a museum or an exhibition space.

When I first arrived here, there was N.A.M.E. Gallery, and Randolph Street Gallery, and those two folded, partly because of the culture wars, partly because of funding from the government. But what I always trust, even though I have this nervousness around it, is that as something maybe disappears, something will arrive in its place. The way that performance is happening now is on fire, and I think we’re in a really wonderful cycle, and I think it’s the nature of the contemporary, of people being more accepting toward liveness and wanting a more live experience, rather than looking at an object. Historically there’s this thing we talk about in performance where we all witness something, and what that means is that the audience is just as actively engaged. I think that was in Goat Island’s work and also the work I love to watch and see. 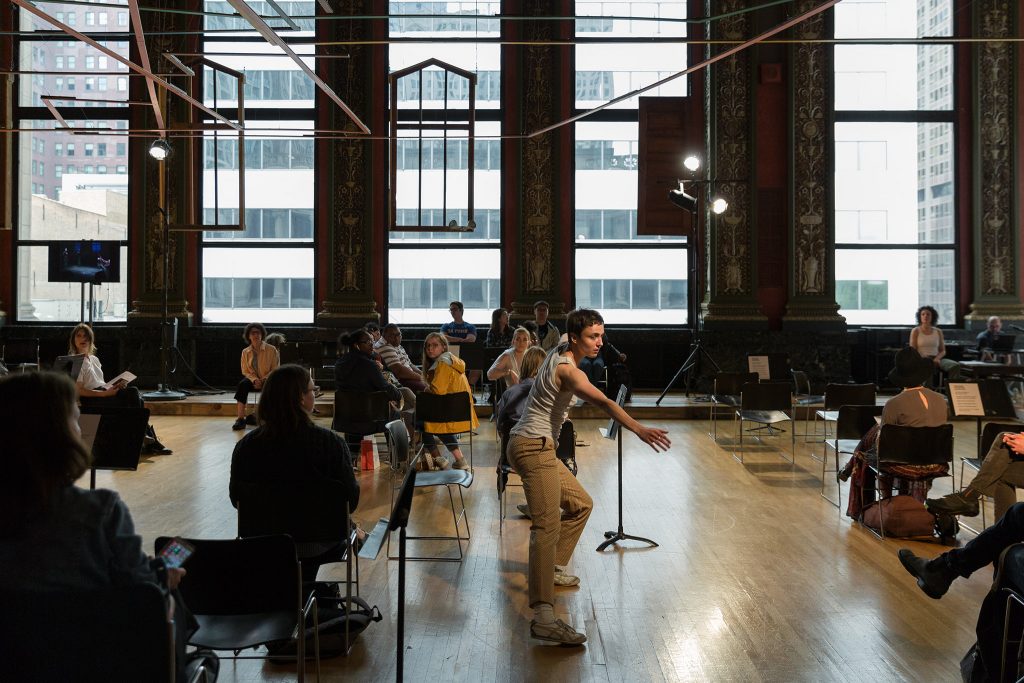 What does it feel like now, to be in more of a curator, teacher and director role?

I think that I would not be here if it wasn’t for Lin Hixson. There are people who I carry in my life all the time. Lin is one of them, my father is one of them. To me it’s about how do you honor the person and the opportunity that you thought you would never have, and the way that you do that is through the respect of making creative work, and through that work, making community happen. The other thing I’ve realized is that I’m a caretaker, I like to take care and look after people. And that somehow translates into directing. With ATOM-r’s work there is a generative process, and a way that members piece together performances with an understanding of the vocabulary of Goat Island. I would say it is also very much about myself and Judd Morrissey and the importance of the technology and the choreographic and the text and the image coming together.

Judd and I were in a partnership for seventeen years, and our decision to break up created two things. I’m performing again with this new work “Rhinestone Cowboy,” which is going back to that three-year-old self where my mother left and I was singing “Rhinestone Cowboy” in the working men’s club in the village. And the other thing is that, as Judd left the house, rather than me being lonely, and also because I’m so domestic, I brought the community to my house, and Ohklahomo became this other thing.

The thing that is so important is that there are established and emerging artists in the same space, and I think it is just as important to do something at Ohklahomo as it is at the MCA. I don’t think of them hierarchically, but what I like about Ohklahomo is that I’ve seen things that I would not see at the MCA. Suddenly it’s like this punk rock thing and it embodies the importance of being strange, and the importance of being messy, and not being polished and shoe-shined. I was listening to the radio, I think it was “Sound Opinions” the other day, and it was really lovely hearing that there was this punk woman, Mary Timony of Ex Hex, that was talking about the importance of just doing crazy shit in the basement. It’s like going foraging, you’re trying to find a jewel. Sometimes that could be Dolly Parton, or sometimes that could be an absolute mess. We need both. We need a mess and we need Dolly. (Holly Warren)

Ohklahomo’s next evening of performances is July 28, 2518 West Iowa. “We Have Discovered the Performance by Making It,” is at the Chicago Cultural Center, 78 East Washington, through June 23.