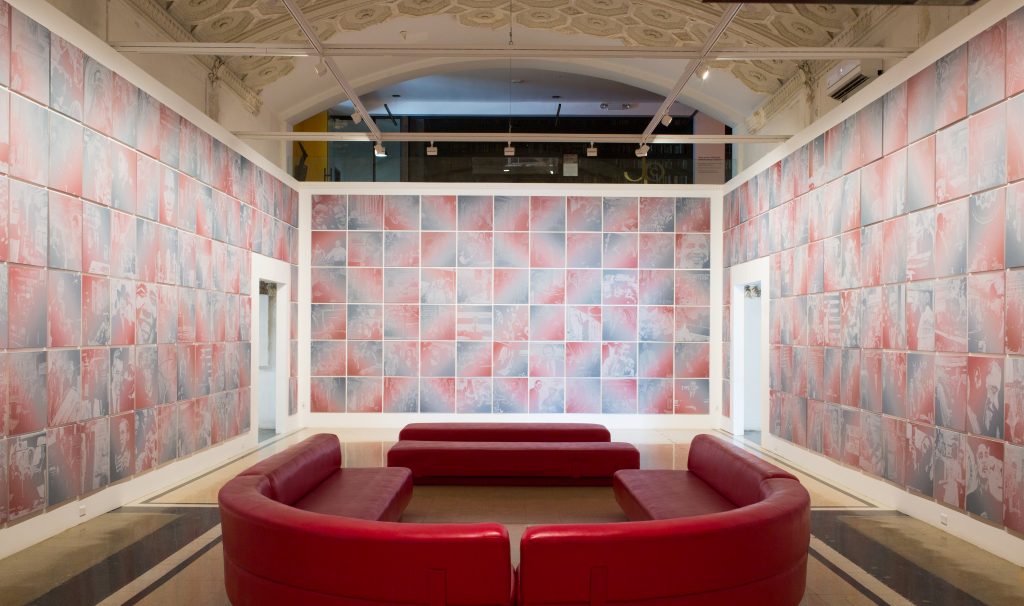 American post-conceptual artist Rob Pruitt showcases former President Barack Obama’s life in office through an emotional retrospective that speaks to the political and the raw aspects of the presidency. “The Obama Paintings” is on view at Stony Island Arts Bank, located one mile from the future Obama Presidential Center.

The exhibition features 2,922 images of Obama’s presidency. The New York-based artist uses his signature gradient scale in each image, with tones that mimic earth-like hues. The repetition in the color spectrum was influenced by Pruitt’s upbringing near the country’s capital and how he understood the monuments around him, serious and somber. Each work is on a two-foot-by-two-foot canvas, hung using a gradient scale from red to blue. White paint is layered on the canvas with expressionist strokes. These thick strokes capture the essence of Obama rather than detail. The quickness of the brush strokes replicates movement.

From political moments like signing bills to an emotional moment with former first lady Michelle Obama, the images are arranged in no conceptual order.

As a location, Stony Island Arts Bank echoes the racial influence and importance of Obama’s presidency. It was established by artist and Chicago native Theaster Gates as a nucleus for black excellence. The South Side has often been portrayed negatively in mass media and the position of this show allows us to reevaluate areas and people we often quickly judge.

The majority of the images Pruitt illustrates are from Google. He has never met Obama, yet like many of us, the former president’s story resonated in a way that allows him to become open and vulnerable to the canvas. After Photoshopping the found images, Pruitt detailed each background in acrylic paint. His gradient scale of blues, violets and reds create a dismal undertone. These hues resemble a fading American flag, which may speak to the current American perception of Obama’s legacy.

Not all of the canvases are on display; some are stored on shelving that matches the aesthetics of a library. The action of looking through the shelved paintings is similar to looking through books in a library. This connection to acquiring knowledge was a crucial aspect of the Obama campaign in both the racial and political spheres. The process of knowledge acquisition was foundational to Pruitt’s understanding of how each of these moments related to him.

The Obama series speaks to the core and foundational values of artwork, the preservation of history, the documentation of importance and the power of action. Pruitt creates a safe space to be introspective and vulnerable, and to reflect on the importance of the roles we play in our everyday lives. (Caira Moreira-Brown)