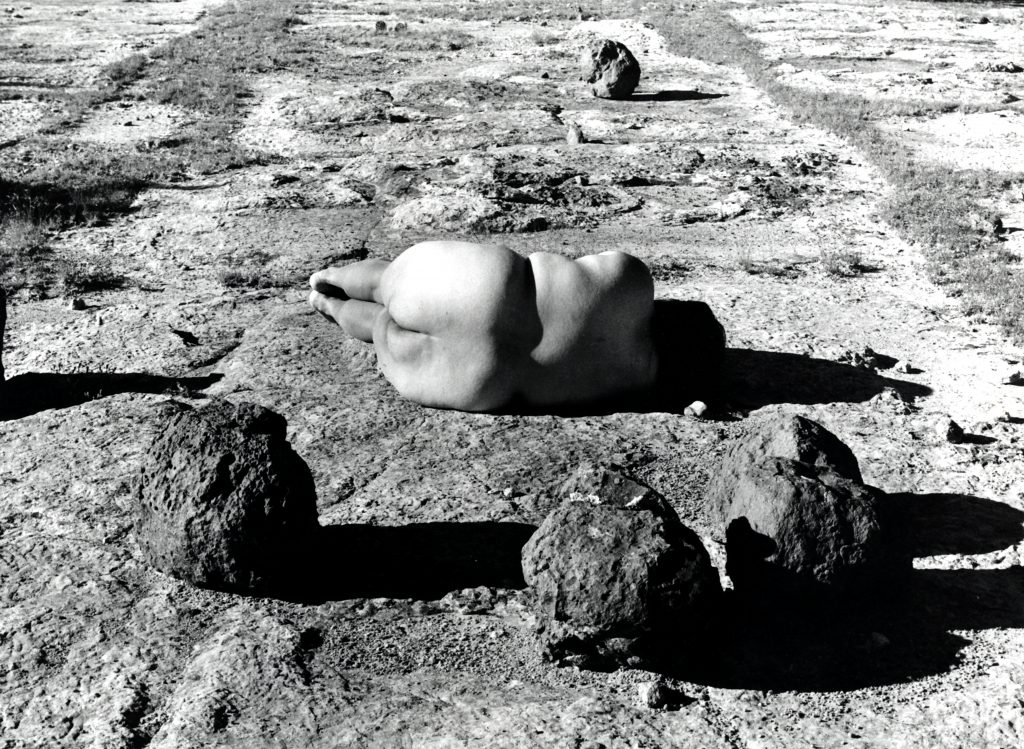 In a striking self-portrait from 1996, Laura Aguilar sits cross-legged in a rocky landscape. Her head is turned into the light, her eyes shut, the folds of her large body mirroring the stony clefts that take up most of the picture. The photograph is composed masterfully, the artist’s right foot dipping into a crevice that extends down the picture’s center toward the viewer. Indeed, Aguilar’s late-career nudes look all the more impressive when paired with works from her earlier career. Turning her body into something like a sculptural object and exploring natural features of the Southwest, she presents (in Laura Pérez’s memorable phrase) perspective and proportion as “culturally shaped and unshaped possibilities” and fashions a profound alternative to the artistic tradition of the nude as fetishized object for the male gaze. It would be worth seeing this show for these series alone.

Although she received some recognition during her lifetime, appearing in the landmark exhibition “Only Skin Deep” and exhibiting at the Venice Biennale in 1993, Aguilar’s claim to significance has tended to rest on two works: “In Sandy’s Room” (1989) and “Three Eagles Flying” (1990). Both explicitly refract issues of race, gender, culture and identity through the genre of the self-portrait, very much in keeping with the practice of other artists of color like Rotimi Fani-Kayode or Adrian Piper working at the same time. Both works are on display here. But this exhibition, Aguilar’s first comprehensive retrospective, shows a much more multifaceted photographer whose technical skills and intellectual curiosity went far beyond the polemics of identity politics. Consider the four-part series “Don’t Tell Her Art Can’t Hurt,” which concludes with the artist pointing a gun in her mouth and is accompanied by captions like: “The t-shirt said ART can’t hurt you, she knew better.” Time and time again, Aguilar’s vulnerability and depression thread her pointed observations about class, race and sexuality.

A third-generation Mexican-American, who defined herself as a Chicana “among other things,” Aguilar strove to bring her experiences as a large-bodied lesbian with auditory dyslexia into her work. Many of her photographs demonstrate close attention to the subcultures hidden within subcultures, best seen in her images of queer communities of color in 1980s Los Angeles. One series chronicles regulars of the Plush Pony, a now-defunct bar for working-class lesbians of color. Butch and femme figures embrace, radiating joy, or square off against the camera. In a deeply moving video from 2007, a nude Aguilar describes the kind of comfort and self-affirmation that she gained from her works in the landscape; in the “Motion” series, women of different weights and ethnicities drape themselves over rocks and branches with a calculated, formally fascinating logic.

Seeing Aguilar’s oeuvre arrayed in (loose) chronological sequence shows how much her skills and vision grew. She worked away at themes, perfected forms of looking and honed an increasingly sophisticated sense of the camera’s potential. This exhibition ought to stake out an art historical place for her that goes beyond the few seminal photographs familiar from textbooks and surveys of contemporary art. The erudite catalogue that accompanies the show will immediately become the first port of call for scholars of this vitally important artist. (Luke A. Fidler)