30
Shane Campbell
Gallerist and Owner, Shane Campbell Gallery
From its primary exhibition space in the South Loop, Shane Campbell Gallery exhibits some of the most exciting work from early- and mid-career artists around, from locals like Chris Bradly and Tony Lewis to those who have decamped for fairer climes, such as David Leggett and Amanda Ross-Ho. In September, the gallery will host a solo exhibition of the abstract painter Zak Prekop, and will also participate in NADA’s inaugural Chicago Invitational.

29
Cesáreo Moreno
Director of Visual Arts and Chief Curator, National Museum of Mexican Art
For more than twenty-five years, Cesáreo Moreno has showcased cutting-edge and historically relevant exhibitions at NMMA. Earlier this year, he helped stage the phenomenal “Laura Aguilar: Show and Tell,” the first comprehensive retrospective of the photographer’s work, and a welcome foray into more diverse, boundary-pushing work. “40 años a la esperanza” opened in August, an exhibition that honors the mural “A la esperanza,” painted at Benito Juárez High School forty years ago, and places it in its proper historical and liberatory context. Moreno recently joined in conversations with the Smithsonian Latino Center around the center’s first gallery space, the Molina Family Latino Gallery, which will open at the Smithsonian’s National Museum of American History in 2021. 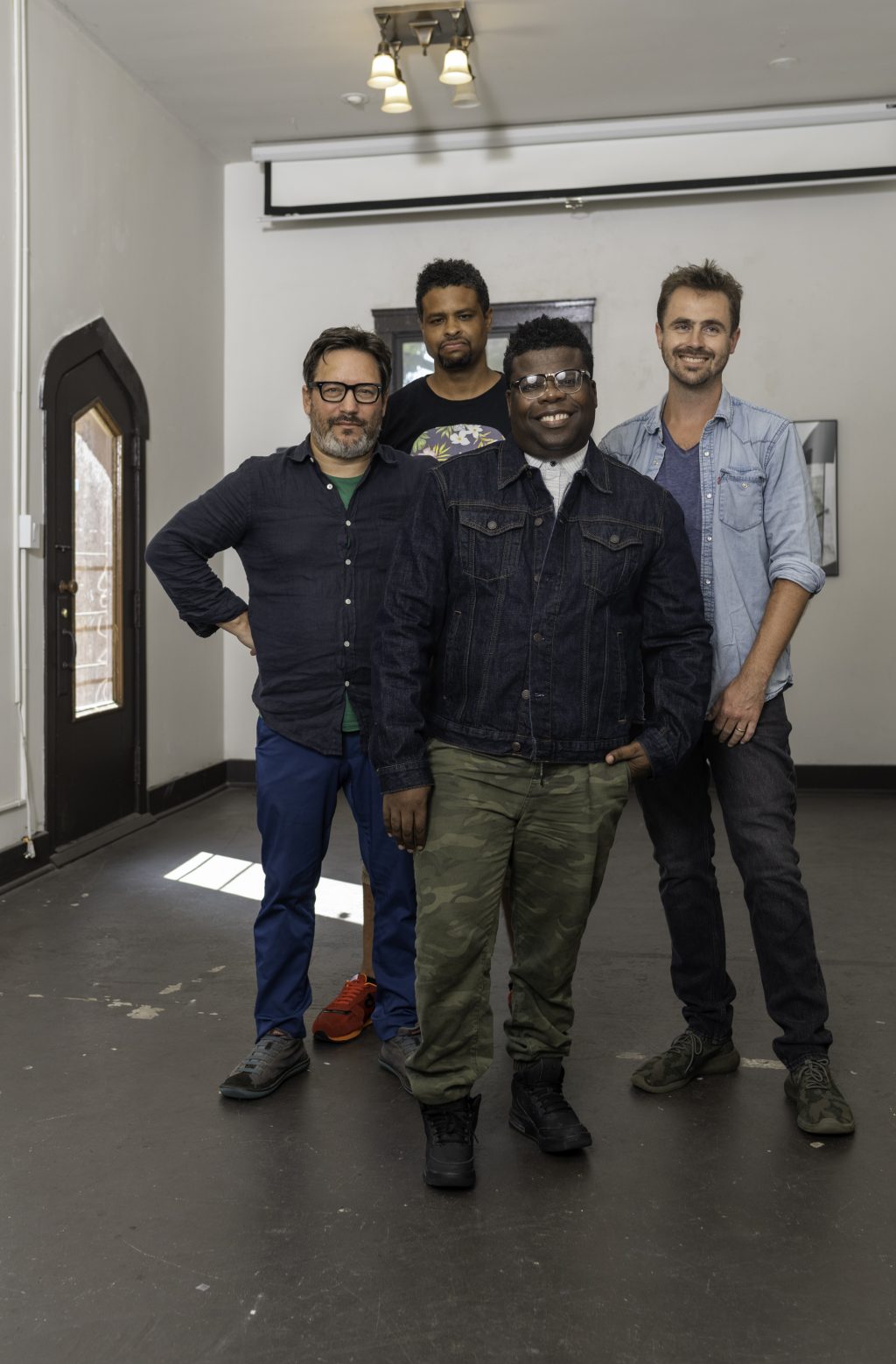 28
Avery R. Young, Andrew Schachman, Faheem Majeed and Jeremiah Hulsebos-Spofford
Co-Directors, Floating Museum
Inspired by the DuSable Museum of African American History, the Floating Museum was conceived as a way to bring art and cultural activities to multiple Chicago neighborhoods. For their 2017 project, “River Assembly,” the group transformed an industrial barge into a mobile gallery, bringing art and programming to sites around the city, reaching an estimated 100,000 viewers. “Cultural Transit Assembly,” their current project, is a public art activation of the CTA’s Green Line, and involves park programming and a train car modified into a gallery. As part of this year’s EXPO Chicago, the museum will exhibit “Founders,” a mobile inflatable sculpture made in collaboration with indigenous artists Chris Pappan and Monica Rickert-Bolter. Viewable on Wednesdays at community sites adjacent to the Green Line, the work highlights historical figures that elevate the stories of indigenous people and people of color, including Jean Baptiste Pointe du Sable and Harold Washington. 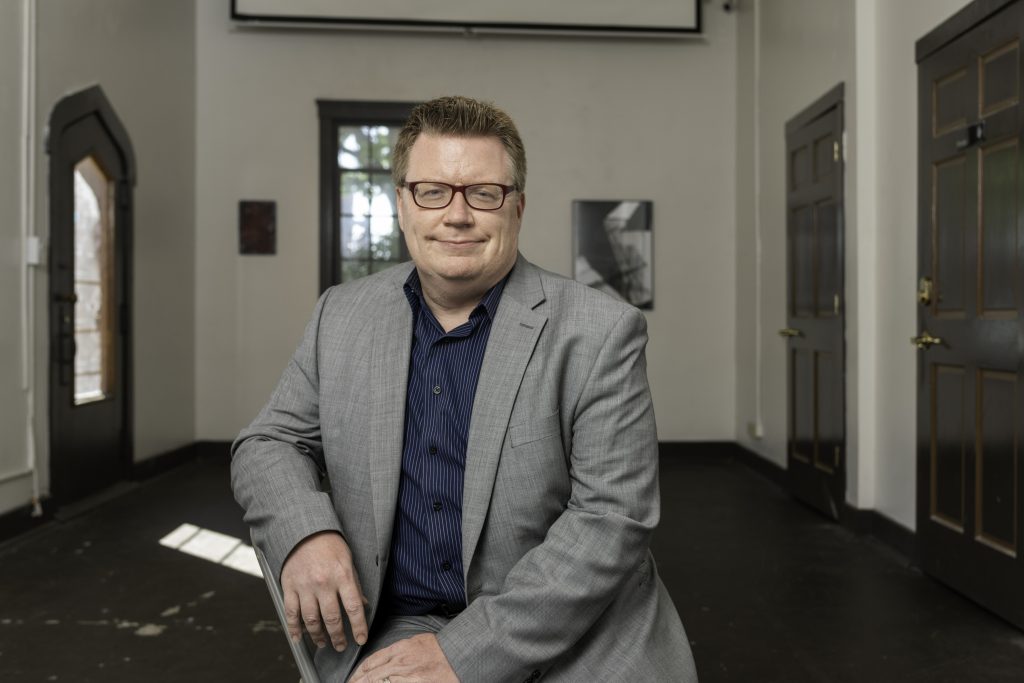 27
Bill Michel
Associate Vice President and Executive Director, UChicago Arts and the Reva and David Logan Center, University of Chicago
Over the course of twenty-plus years on the University of Chicago campus, Bill Michel has held an almost-unimaginable range of positions: undergraduate, MBA student, associate dean of the college, assistant vice president of student life. He’s been in his current role as executive director of the Logan Center since its groundbreaking in 2010, and is on the leadership team for UChicago Arts. In each of these roles, Michel has steadfastly committed to engaging the South Side and greater Chicago community with the music, theater and arts activities on campus.

26
Lisa Yun Lee
Executive Director, National Public Housing Museum and Associate Professor of Public Culture and Museum Studies, UIC
Lisa Yun Lee lives by activist Toni Cade Bambara’s call to “make revolution irresistible,” and  witnessing Lee’s efforts to incite through the arts a radical democracy in which resources like housing are a right, the revolution feels not just desirable, but attainable. As co-founder of the Public Square at the Illinois Humanities Council, a previous director of the Jane Addams Hull-House Museum and a member of Mayor Lori Lightfoot’s cultural transition team, Lee has worked to preserve Chicago’s past as a hub for activism and leverage its social movements to inform a progressive way forward. She serves as the executive director of the National Public Housing Museum, the world’s largest archive of public housing, where current tenants drive much of the work: they provide visitors with context for its holdings and collectively own and run its gift shop. As Lee works to empower the public, she not only shapes the progressive future of arts and engagement for Chicago, she’s making a model for the rest of the country to follow. 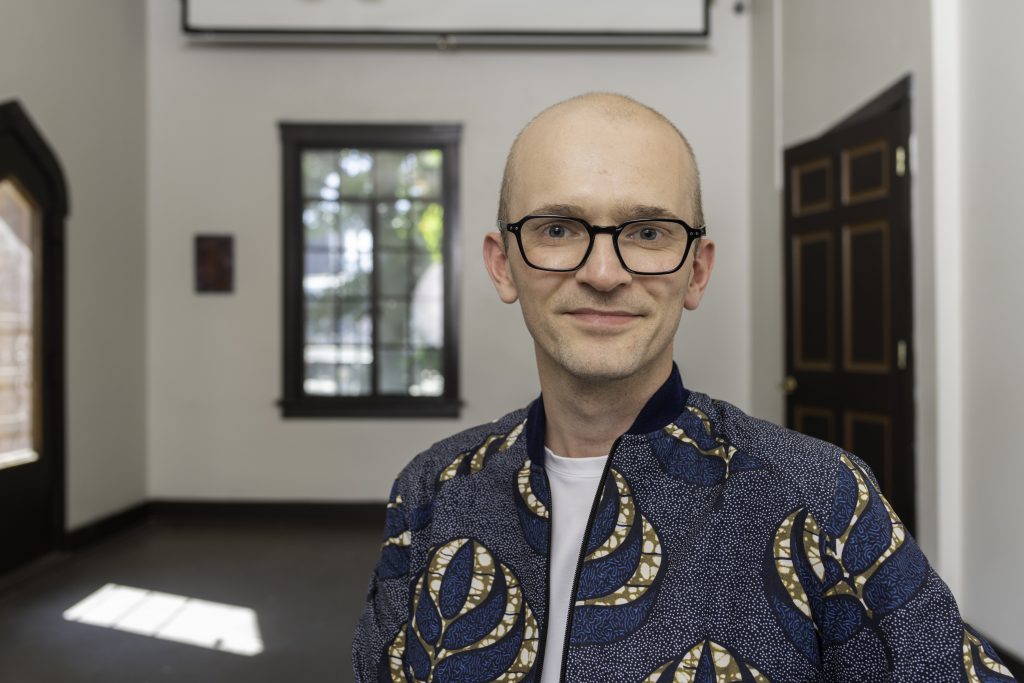 25
Hendrik Folkerts
Dittmer Curator of Contemporary Art, Department of Modern and Contemporary Art at the Art Institute of Chicago
Hendrik Folkerts arrived at the Art Institute in July 2017 and hit the ground running in his pursuit of new directions for gallery-based performance. In May, the rising star organized Anne Imhof’s wildly popular large-scale performance, “Sex.” Cevdet Erek’s installation and sound performance, “chiçiçiçichiciçi,” which opened in February, was the first installment of Iterations, a series of performance commissions. “These exhibitions were all developed and presented in very close collaboration with the artists, strengthening the Art Institute as a place where artists and their work are central to how the museum learns and operates,” Folkerts says. He’s currently at work on an exhibition to put the work of Mozambican painter Malangatana Ngwenya in context with his country’s fight for independence, as well as a project with choreographer Ralph Lemon. 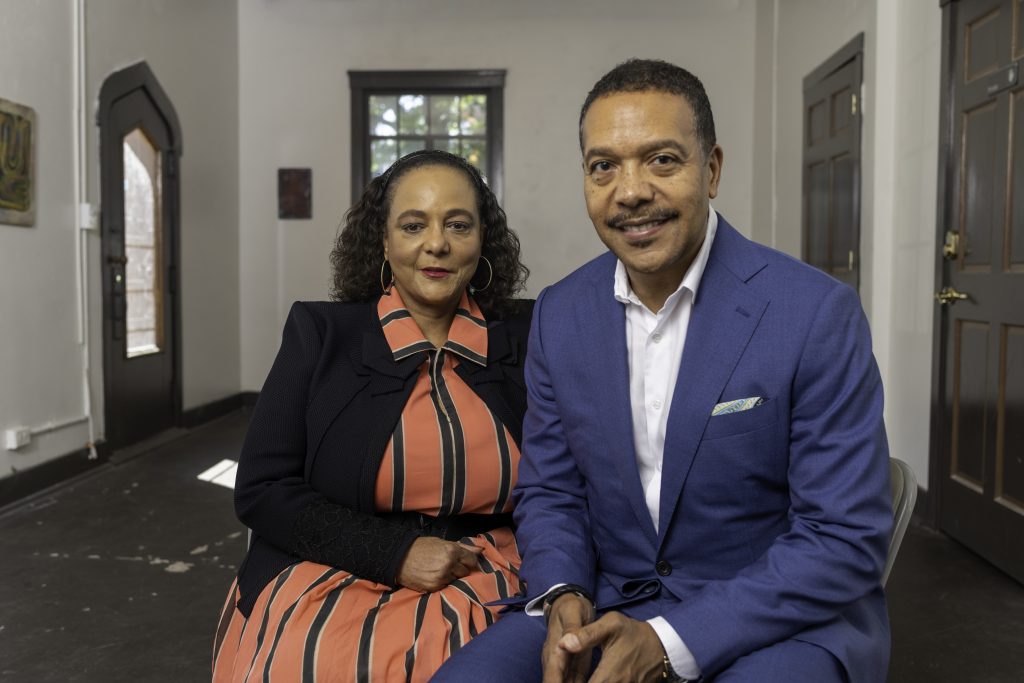 24
Eric T. and Cheryl McKissack
Collectors
Eric McKissack, founding partner and CEO emeritus of Channing Capital Management, and his wife Cheryl have collected art, primarily by local artists of color, for decades. The couple recently lent work by Wadsworth Jarrell to the Museum of Contemporary Art North Miami for their AfriCOBRA exhibition, which continued onward as an official collateral event of the 2019 Venice Biennale. The McKissack’s gifted a rare copy of a 1970 bust by Charles Alston that depicts Martin Luther King, Jr. to the Smithsonian National Museum of African American History and Culture in 2016. Eric also sits on the boards of the Graham Foundation and the Art Institute. 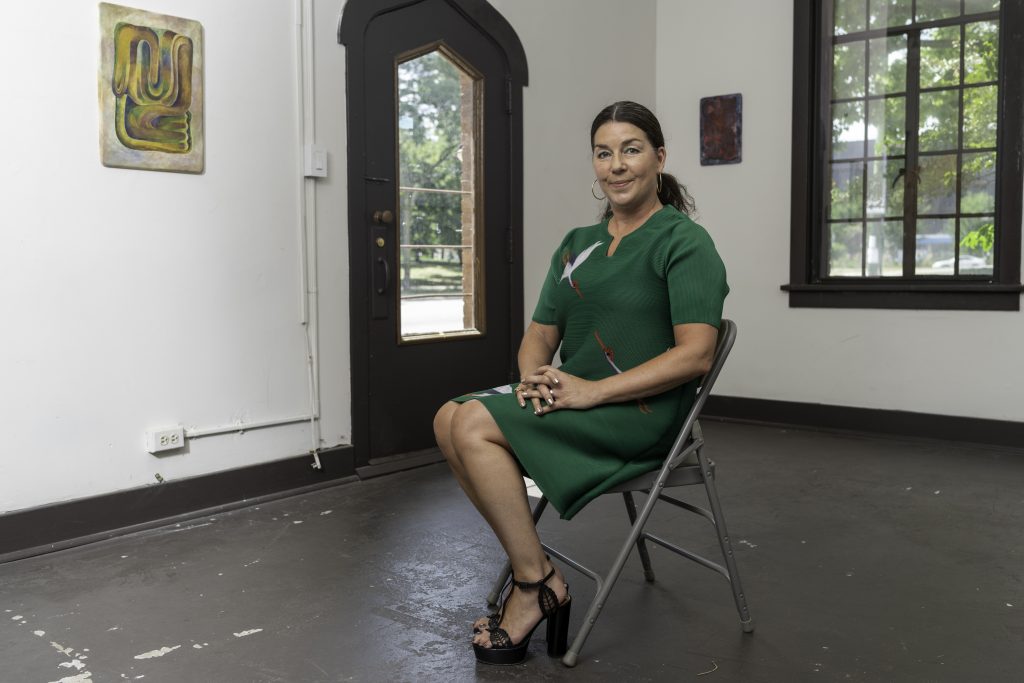 23
Monique Meloche
Gallerist and Owner, Monique Meloche Gallery
Known for her keen eye for talent, Monique Meloche has forged a strong position in the city’s gallery scene. Her artists, past and present, have seen huge professional successes in recent years. Amy Sherald’s portrait of former First Lady Michelle Obama hangs permanently in D.C.’s National Portrait Gallery and Rashid Johnson’s first feature film “Native Son” premiered at Sundance, but Chicago artist Brendan Fernandes might be having the biggest moment. He’s staged performances on the High Line and at the Getty Museum, was part of the 2019 Whitney Biennial and his first solo exhibition with Meloche is scheduled for November. Since relocating to a larger space in West Town in 2018, Meloche has committed to ever-more-ambitious programs. With more than fifty percent of her roster artists of color, the gallerist’s commitment to expanding the diversity of the art world is commendable. The gallery’s recent acceptance into the prestigious ADAA is further evidence of Meloche’s curatorial prowess. 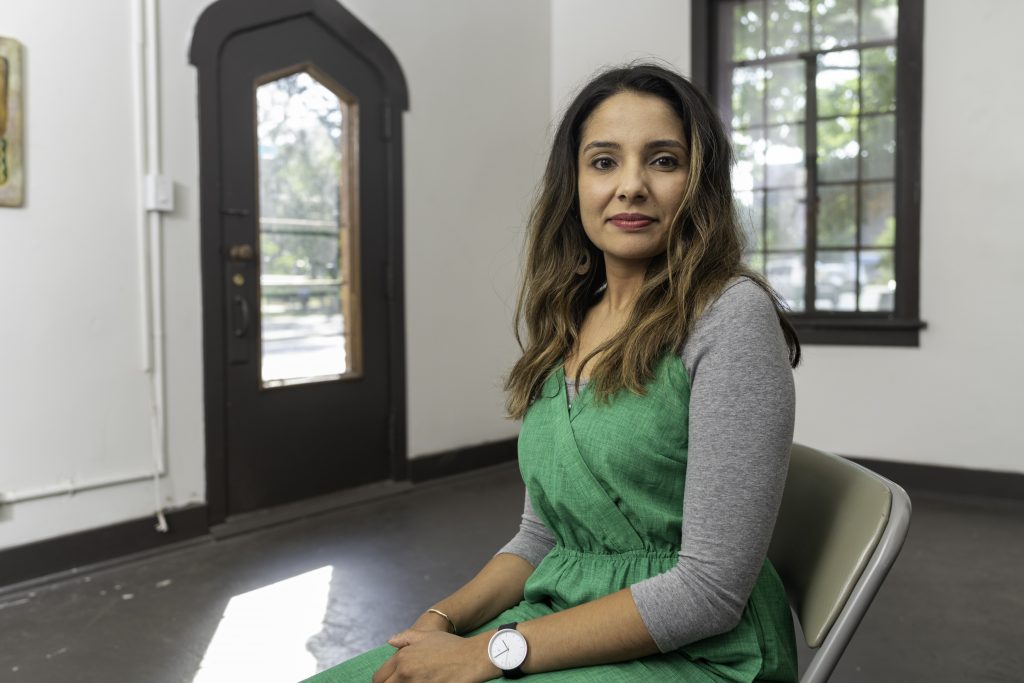 22
Nadia Sulayman
Director, Community Arts & Programs, Arts + Public Life, University of Chicago
As director of community arts and programs at the University of Chicago’s Arts + Public Life, Nadia Sulayman oversees public arts programming, exhibitions and overall strategy. For Sulayman, honoring the cultural legacy of Washington Park, where Arts + Public Life is located, is a crucial component of her work. “That rich cultural heritage hasn’t left,” she says. “I get to think ambitiously about how to leverage resources and opportunities so that arts and culture aren’t just a part of this neighborhood’s past, but a driver and catalyst in the contemporary moment too.” She has launched a curatorial program to aid emerging curators in developing their skills. A longtime interest in making the invisible work of the arts world visible has developed into a spring 2020 exhibition at the Arts Incubator, which will showcase the art of lesser-known cultural workers. 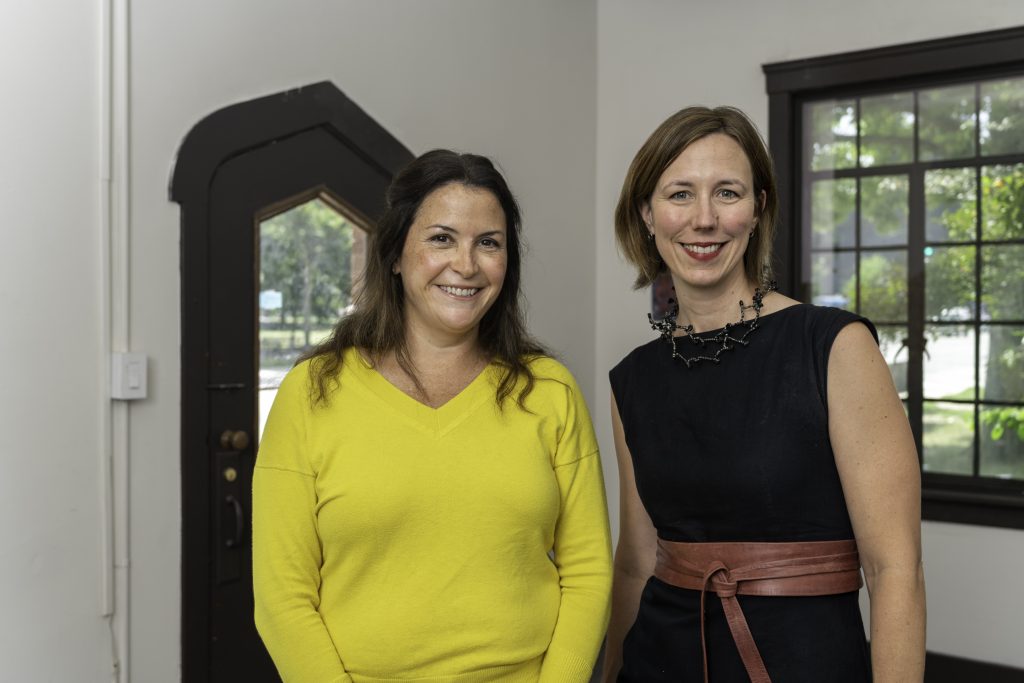 21
Kate Lorenz and Allison Peters Quinn
Executive Director and Director of Exhibitions & Residency, Hyde Park Art Center
Through the leadership of Kate Lorenz and Allison Peters Quinn, the Hyde Park Art Center functions as a vehicle for both established and early-career artists while creating space for the broader community to connect with creative ideas. Over the past two years, artists like Anna Kunz and Folayemi Wilson have taken over the main gallery space to stage ambitious, immersive exhibitions. HPAC is developing international exchanges between Chicago artists and global institutions to foster creative exchanges, with Croatian artist Selma Banich in residence this fall. Local sculptor Faheem Majeed will mount a major solo exhibition in 2020 that Lorenz says “will be ambitious in every way.” As educational programming is a crucial component of their mission, HPAC is prototyping a model for artists of all ages and skill levels that will give access to training, space and equipment, and a creative community.