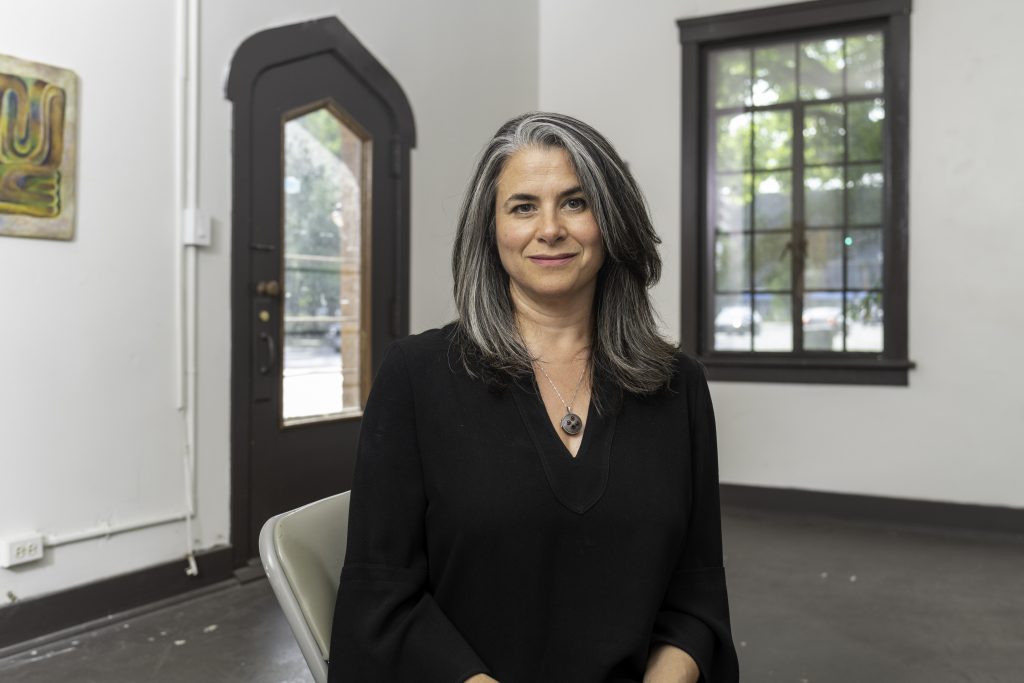 10
Janine Mileaf
Director, Arts Club of Chicago
Janine Mileaf’s tenure as director of the Arts Club of Chicago has been filled with initiatives and ideas to make the public aware of the institution’s work. From rotating sculptural installations displayed outside, to jazzy new street signage, Mileaf is dedicated to expanding the reach of the Arts Club’s work. Her programming of exhibitions and performances fits well into the institution’s daring avant-garde history, regularly challenging viewers and artists to take risks and deepen their understanding of contemporary art. In Ekene Ijeoma’s recent performance, the artist used the National Anthem and a player piano to address the crisis of mass incarceration. In September, the Arts Club mounts a solo exhibition by Abraham Cruzvillegas, which will include constructions made onsite that address the migration of Mexicans from Michoacán to Chicago. Mileaf and her team are also focused on more public programming, including an ongoing performance series called “Platforms.” 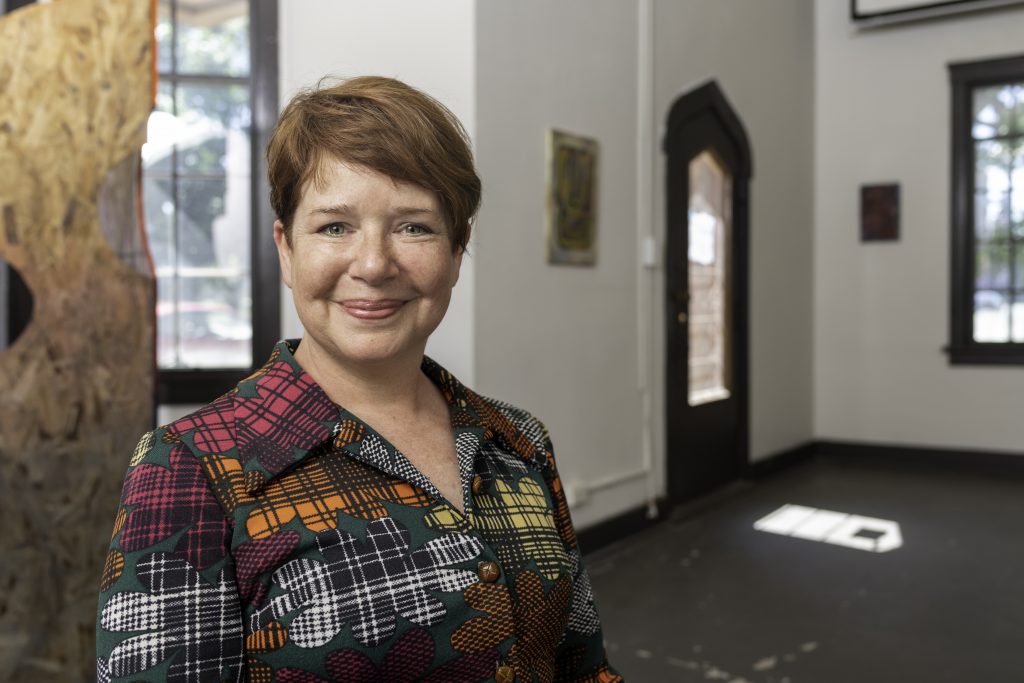 9
Esther Grimm
Executive Director, 3Arts
3Arts holds a unique place in Chicago’s art philanthropy world: it promotes and supports the work of local women artists, artists of colors and artists with disabilities through project funding, unrestricted grants, residency fellowships and other avenues. Esther Grimm has served at the helm of the organization for more than fifteen years, seeing it through continued growth and a sustained focus on its mission. In 2017, 3Arts launched their Make a Wave program, an artist-to-artist giving program, which will increase its award to $2,000 this year. Grimm has overseen the creation of their first Artist Council, where eight artists become co-decision-makers in programming. Her staff is currently planning the annual 3Arts Awards Celebration; this year the event’s honorary co-chairs include Mayor Lori E. Lightfoot and First Lady Amy Eshleman.

8
Yesomi Umolu
Director and Curator, Logan Center Exhibitions, University of Chicago
Seemingly no one can match Yesomi Umolu’s level of prodigious activity, carried out with clear purpose and intention. Since coming to Chicago in 2015 as curator of the University of Chicago’s Logan Center Exhibitions, she has made a splash organizing exhibitions, with a focus on global contemporary art and spatial design. As the artistic director of the 2019 Chicago Architecture Biennial, Umolu has assembled an ambitious program that invites viewers to interrogate the built environment through social, geopolitical and ecological perspectives. Called a “visionary curator” by Rahm Emanuel, earlier this year she added director of Logan Center Exhibitions to her resume. A 2016 recipient of an Andy Warhol Foundation for the Visual Arts Curatorial Fellowship, she also sits on the board of trustees at the Graham Foundation. 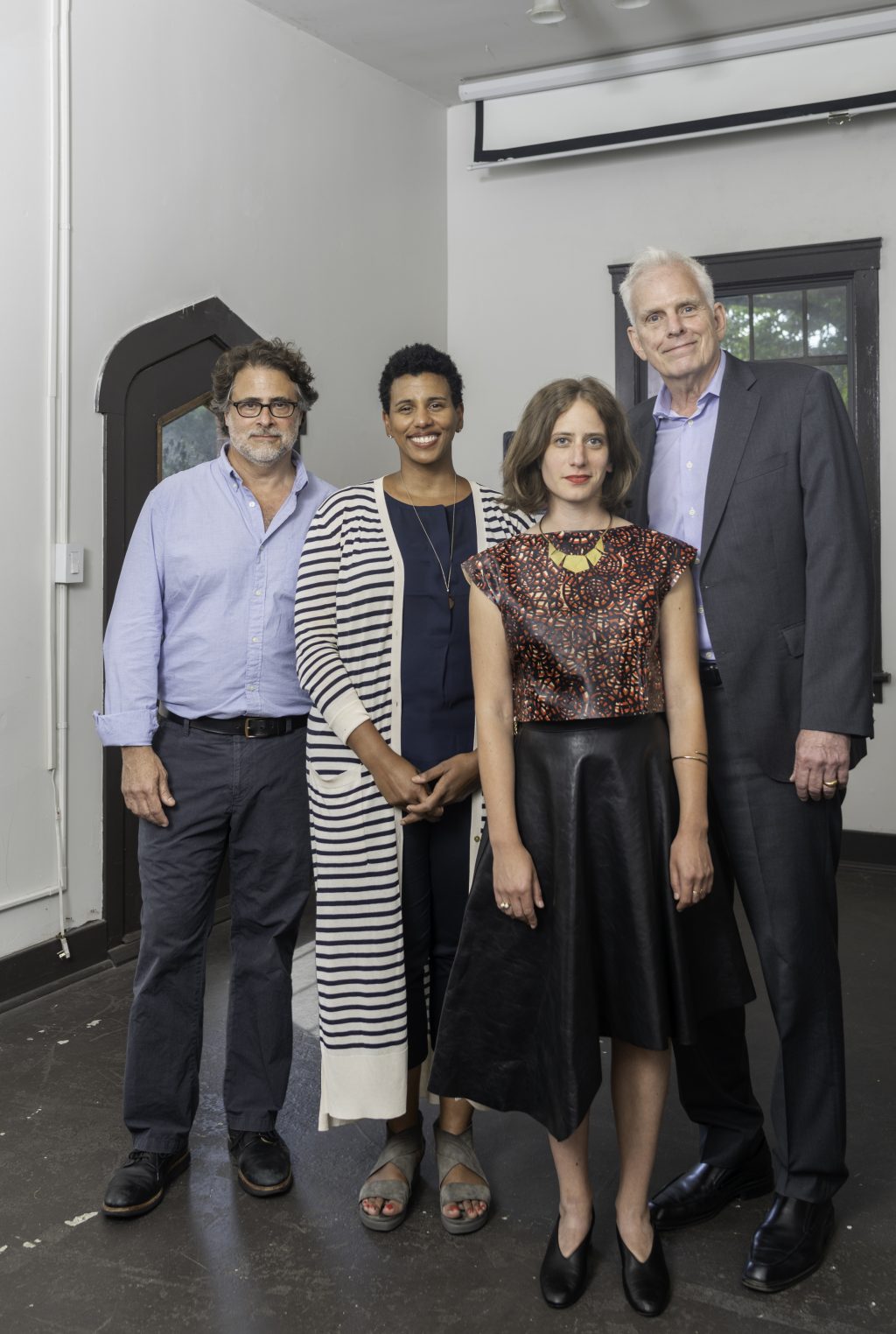 7
Mark Kelly (Commissioner), Erin Harkey (Deputy Commissioner for Programming), Daniel Schulman (Director of Visual Art)  and Lydia Ross (Director of Public Art)
City of Chicago Department of Cultural Affairs and Special Events
The city’s Department of Cultural Affairs and Special Events (DCASE) team is responsible for bringing art to the public through a wide range of programming and exhibitions. The team, which also includes Greg Lunceford, Nathan Mason and Joanna Goebel, ran the Year of Public Art initiative in 2017, with public art commissioned in each of the city’s fifty wards. Earlier this year, DCASE worked with other city departments to launch a mural registry which aims to catalogue and celebrate Chicago’s vast collection of painted murals. They also launched an initiative for Maxwell Street Market, with a commission by Yvette Mayorga and William Estrada, to capture the richness of the market’s legacy. Looking ahead, DCASE will mount an ambitious retrospective of the work of Robert Colescott in 2020 and this fall will launch a professional development series on the role of art in communities. 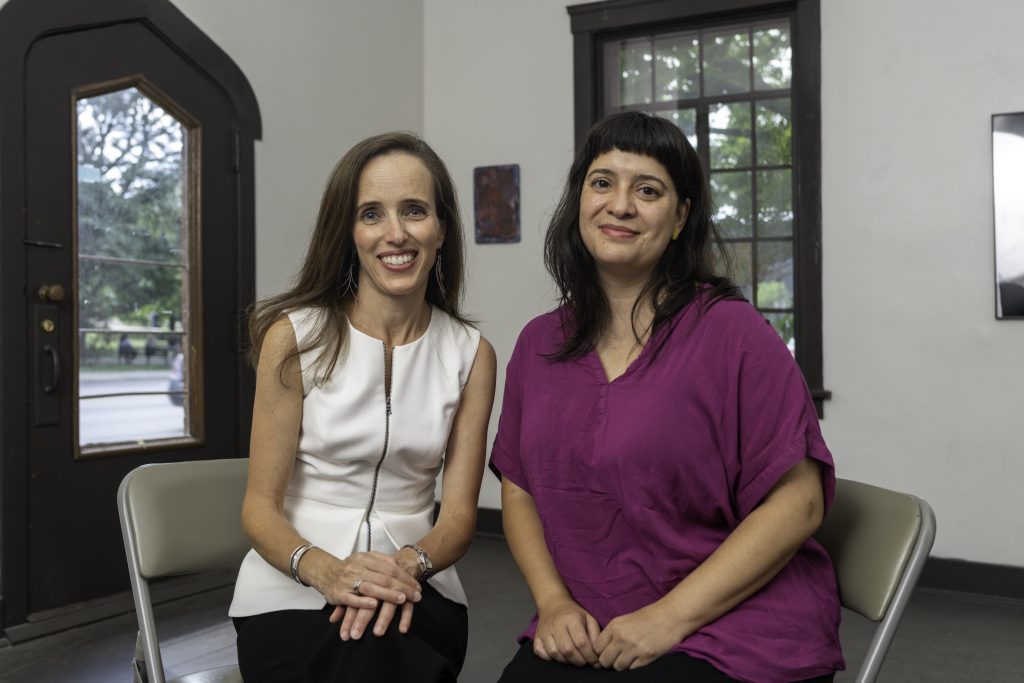 6
Teresa Silva and Caroline D. Older
Director of Exhibitions & Residencies and Executive Director, Chicago Artists Coalition
Chicago Artists Coalition has been busy. Executive director Caroline Older oversaw the 2018 move from Fulton Market to the Kinzie Industrial Corridor, making sure the new construction was ADA-accessible and had room for CAC’s first dedicated education center. CAC also removed artist fees from the BOLT and HATCH residency programs, ensuring that the programs are widely accessible. In line with this goal, CAC launched its SPARK microgrant program, an unrestricted award for Chicago artists with disabilities who have demonstrated a need, are self-taught or identify as a person of color. (The success of their artist development programs is demonstrated by the inclusion of six CAC alums in Newcity’s 2019 “Breakout Artists” issue.) The support and guidance that Teresa Silva brings to the organization, as director of exhibitions and residencies, is widely heralded. CAC looks forward to the creation of a library that will hold the art-book collection of the late Sabina Ott.

5
Gary and Denise Gardner
Collectors, Art Institute of Chicago Trustee
Gary and Denise Gardner have developed an impressive art collection in their South Side home over the past twenty years, with a keen focus on the work of African-American artists and Chicagoans. “Our passion is to share the rich culture and history of African-American art and connect our community more fully with art and art-making,” Denise says. “It’s not only a source of pride, but also a vehicle for activating change and creating livelihoods.” The couple were major sponsors of the Art Institute of Chicago’s 2018 Charles White retrospective and frequently advocate for museums to expand their collections to include more work by African Americans. In addition to serving on the Art Institute of Chicago’s Board of Trustees and on SAIC’s Board of Governors, Denise recently joined the board of the Gaylord & Dorothy Donnelley Foundation, where she focuses on diverse small arts organizations. 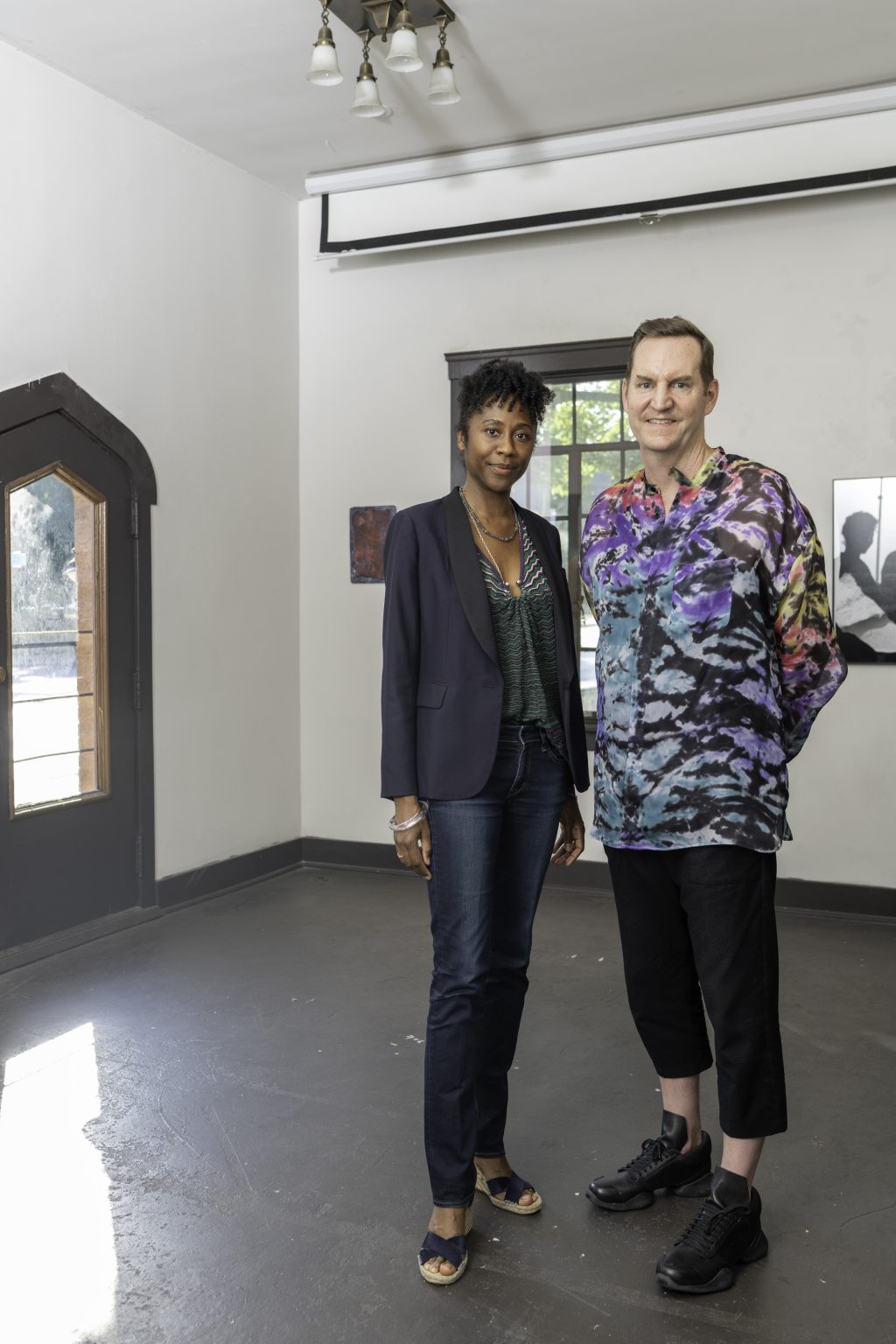 4
Naomi Beckwith and Michael Darling
Curators, Museum of Contemporary Art Chicago
The exhibition schedule at the MCA never fails to astound, thanks in large part to the prodigious efforts of senior curator Naomi Beckwith and chief curator Michael Darling. Beckwith co-curated last year’s stellar “Howardena Pindell: What Remains To Be Seen,” the long-overdue, first major survey of the artist’s work. Darling was the lead curator of the summer’s hottest exhibition, the three-years-in-the-making “Virgil Abloh: Figures of Speech.” Up next, he’s working on a painting exhibition that will show the influence of digital processes. Beckwith has been thinking deeply about making the MCA collection more diverse and more accessible to the public, as the museum works on a new strategic plan. “I love thinking of ways to make art and art history more accessible to a broad public,” she says.

3
Elissa Tenny
President, School of the Art Institute of Chicago
As the president of the School of the Art Institute of Chicago, Elissa Tenny understands the importance of creating a lasting foundation for arts education. She views artists as vehicles for change, and uses her position at SAIC to cultivate an atmosphere for students’ artistic and academic prosperity. Since Tenny assumed the position in 2016, SAIC launched a space in Homan Square, which engages North Lawndale artists with the school’s artists and educators to hold classes, residency programs, exhibitions and other public art offerings. A present and approachable president, Tenny has maintained SAIC’s commitment to excellence; the graduate fine arts program is consistently named one of the best in the country by the annual U.S. News & World Report survey. Tenny also serves on the boards of the Chicago Loop Alliance and the Chicago Artists Coalition.

2
Solveig Øvstebø
Director and Chief Curator, the Renaissance Society
Under the direction of Solveig Øvstebø, the Renaissance Society continues to exhibit some of the most exciting work in Chicago, from an international roster of artists. In the past two years, the Ren has produced major new projects, including by Liz Magor and Jennifer Packer. This past spring, a million-dollar gift from the Mansueto Foundation, the institution’s largest ever, ensures it will have a strong publishing program for the next decade. In September, the Renaissance Society will exhibit a groundbreaking new body of work from LaToya Ruby Frazier, her first solo show in Chicago, examining the General Motors workers og Lordstown, Ohio. As part of the Feminist Art Coalition, a group exhibition in line with the network’s ethos of presenting feminist-driven projects as the election nears, is slated for the fall of 2020. 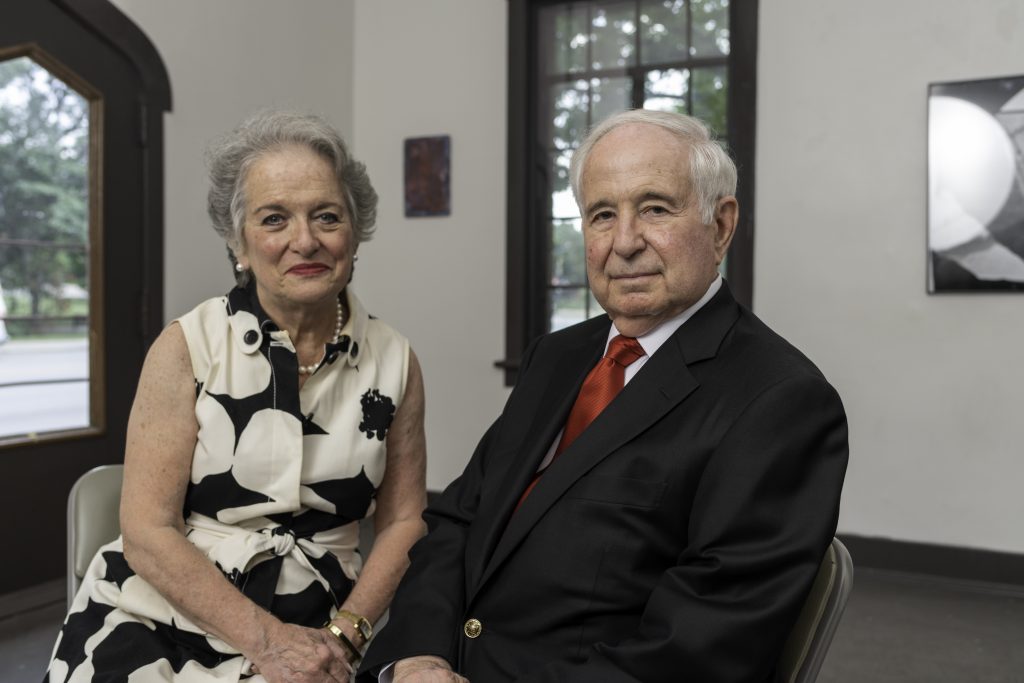 1
Jack and Sandy Guthman
Collectors
Jack and Sandy Guthman have been preeminent patrons of contemporary art in Chicago for decades. Between them, the list of institutions they have supported is daunting: Hubbard Street Dance, EXPO Chicago, the MCA, the Chicago High School for the Arts, to name only a few. Jack currently serves on the board of United States Artists, where the couple has endowed a fellowship. He is the chairman of the board of this year’s Chicago Architecture Biennial and serves as a trustee to the MCA. The Guthmans gifted the museum fifty contemporary photographs by women artists in 2017. The couple are drawn to conceptual photography and work that has a social or political bent. “It’s always pleasing to us that some of these artists that we have an interest in have been heralded,” Sandy says. The couple look forward to DePaul Art Museum’s upcoming solo exhibition for Julia Fish, to which they have lent work.