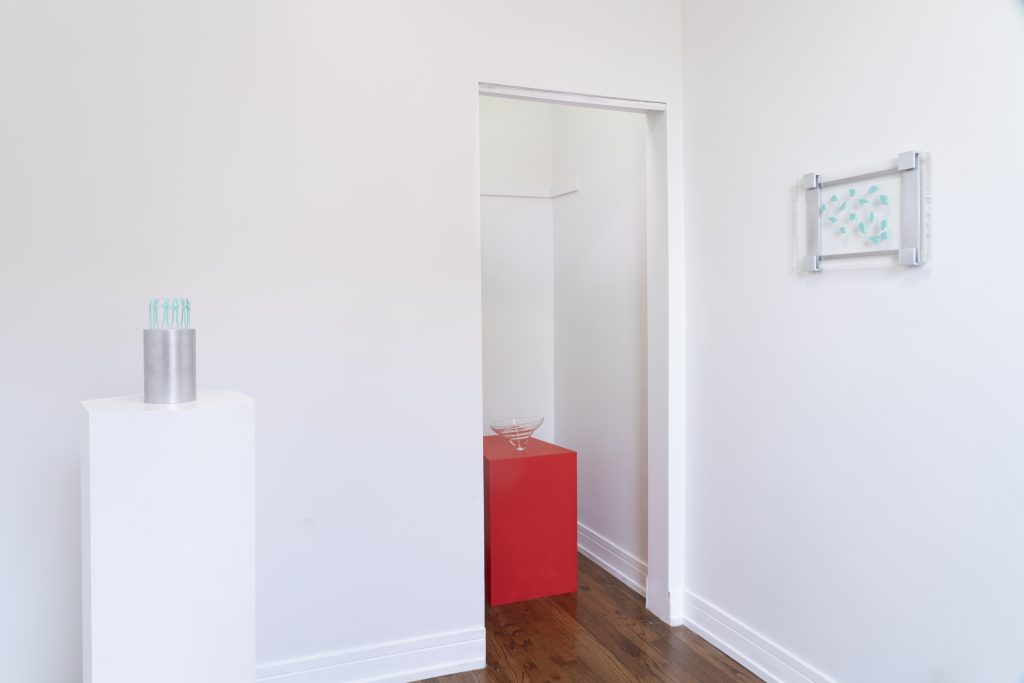 “I view sex as a diverse, dynamic, interactive and interdependent social relation cultivated by the ways in which bodies, spaces and objects interrelate; it is not, therefore, solely a relationship between human bodies but also a relation between bodies and objects and the ways in which bodies are invited, coerced and positioned around and toward particular kinds of objects.”

As I have come to know it, Martha Poggioli’s work has long been concerned with interrogating the ways in which bodies and banal objects interact. Poggioli’s sculptural body of work has primarily explored the history of intrauterine contraceptive devices and how these unseen tools inhabit the body, but in their inaccessibility and constant touch(ing), become indistinguishable from the subject in which they reside. In “Rational Behavior,” Poggioli’s first solo exhibition at Extase in Ukrainian Village, these themes take on new meaning, imagining different, instructional relationships between beings and objects.

The four works in “Rational Behavior” each depict a distilled representation of the real, fitting for the apartment-bedroom-turned-white-cube space in which they are displayed. “American Beauty,” a mounted acrylic panel on which tiny representations of fragmented human hands are laid onto rests. Like board-game pieces, their positions are mutable. Each tiny hand can be moved around the plane, altering their orientation. In a conversation with Poggioli, she noted that the inspiration for her new work, as displayed in “Rational Behavior,” came from an instructional pamphlet on how to perform CPR that the artist encountered this summer during her residency at the Ox-Bow School of Art. In these brochures, the humanoid figures illustrated as administrators of CPR were colored a light blue-green that is used throughout the exhibition. Conjuring memories of latex medical gloves, these sterile examination tools have become the object of examination, like objects on a microscope slide. 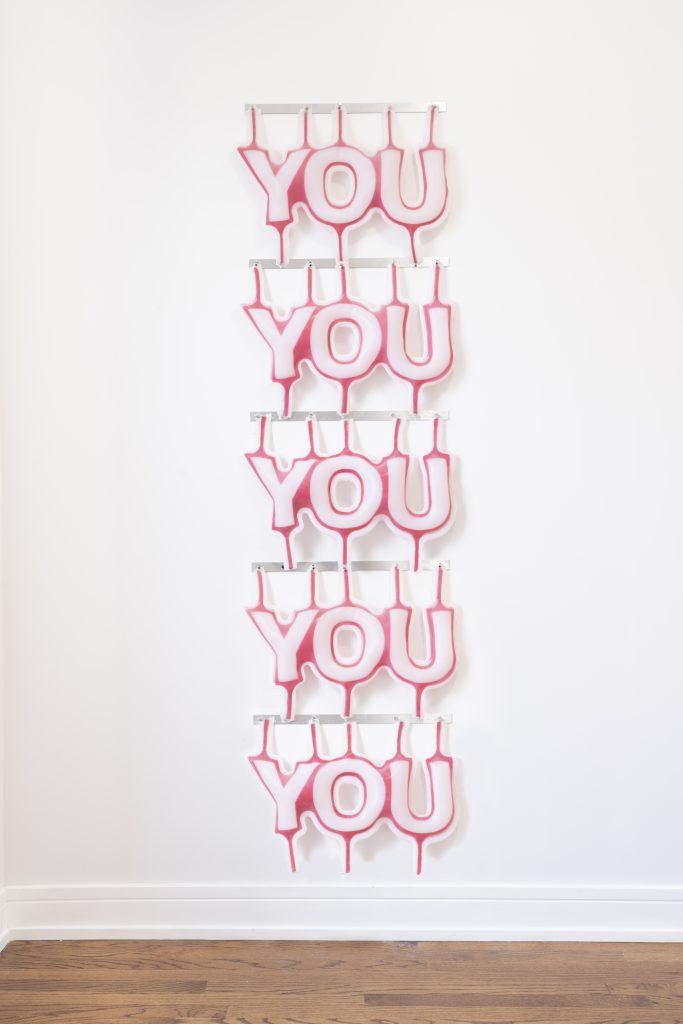 Just as a latex glove, a rubber sheath and an amalgam of other synthetic barriers restrict and reshape skin-to-skin contact, the other artworks in the room add to a conversation around altered intimacy. Directly facing the viewer as one enters the gallery hangs a silicone sculpture titled “With lips waiting for kisses” that nearly reaches the height of the room. It reads “YOU YOU YOU YOU YOU,” in white letters outlined in bright red, appropriating the words and typography seen in the ubiquitous plastic “Thank You” bags given by convenience stores and take-out restaurants. Quite literally, the piece mobilizes the words and colors of an instructional language (both verbal and visual) in order to create a semiotic relationship to urgency and desire— an urgent desire for you. Like the bags they mimic, through elements such as their grammatical fragmentation and material qualities, the message is filtered. The carnal desire the words denote is somehow augmented, or as the artist says, “The object is speaking to you in a way that is at once intimate as distant.”

The symbolic relationship to the instructional carried by the green gloves and the red text beg a return to my citation of Jennifer Tyburczy’s book “Sex Museums: The Politics and Performance of Display,” and her invocation that “all museums are sex museums.” For Tyburczy, these spaces act as instructional sites where anatomy, sex and gender are displayed, constructing and mediating our ideas of normative sex and desire.

Although in many ways museums exist as an epistemological center, these relationships become all the more intimate in the apartment gallery—in the physical proximity between viewers, objects and other viewers forced by spatial limitations, coupled with the invasive act of entering a gallerist’s home. The other three pieces on display successfully communicate their relationship to the instructional, but there lingers an out-of-place and unsettling effect in “Lovely Love Song,” a sound piece consisting of a glass funnel used to amplify volume resting on a box (again, painted a bright cherry red) that plays a looped recording. Perhaps a missed opportunity to incorporate more instructional auditory references (think emergency announcements heard on airplanes, closing times in shopping centers), the piece offers a different kind of reference to our socially informed developments of desire. The box plays eerie sound clips from classic films and romantic comedies, sometimes segments of romantic dialogues between male and female leads, and sometimes a rendition of  “Somewhere Over the Rainbow.” The register of these sounds as they tap into our memory approximate a type of nostalgia and longing, though somehow both filtered and polluted by the muffle from the makeshift speaker and in that they sound old, or temporally distant from us.

This unsettling dimension to “Rational Behavior” points to the uncanny valley, the realm that the artist categorizes the figures in instructional manuals as existing in. The uncanny valley, in aesthetic theory, is a hypothesized relationship wherein the more closely (yet still imperfectly) an object resembles the human form, the more of an unsettling emotional response it triggers in a viewer. Throughout “Rational Behavior,” forms both sculptural and sonic touch something almost human, almost real. Forms that these objects take are at times familiar as representative of the human body, though at others sculptural. What appears to be a dental flosser at one moment becomes a human hand the next. Recognizable human voices become temporally distant and artificial. While admittedly far from the humanoid animations and illustrations that decidedly creep us out, like those in the CPR brochure, there remains a trace of human desire in all of these artworks. At once close-to and alienated-from these objects, maybe all of our desires rest somewhere in the uncanny valley. (Emilia Nicholson-Fajardo)