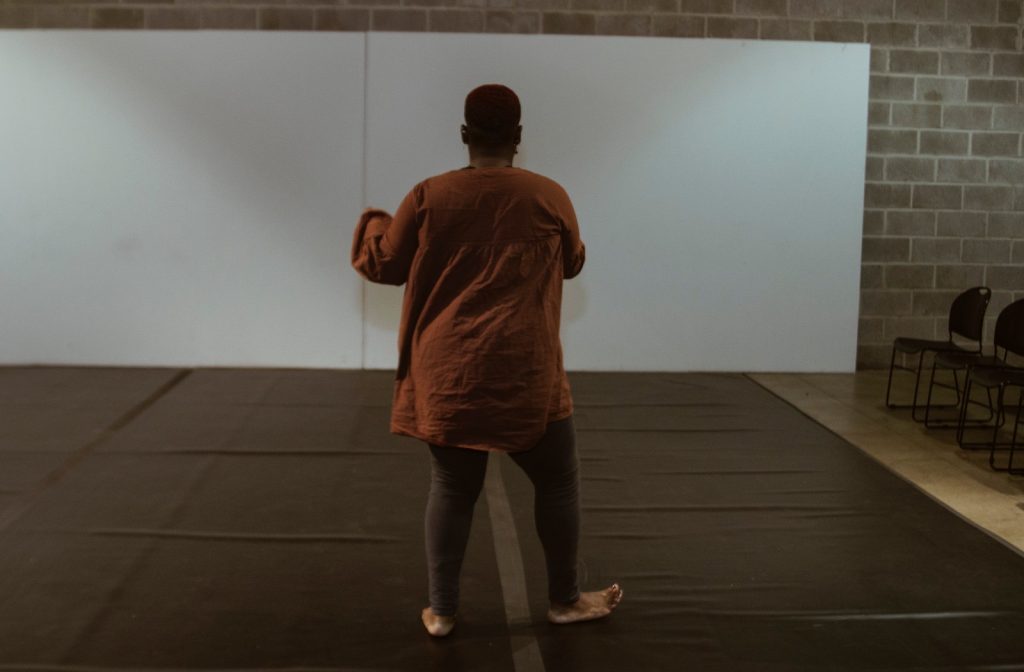 Sharing the work we create can be an act of vulnerability. Sharing art unfinished, one of the most intimate acts.

Dorothée Munyaneza, a Rwandan multi-disciplinary performance artist, shared two excerpts from an in-progress work on December 19, culminating a two-month residency with High Concept Labs at Experimental Station. Vulnerability is already the beating heart of her work.

Munyaneza and her family emigrated to London from Rwanda after the genocide when she was twelve years old. In the 100 days of violence, it is estimated that between 250,000 and 500,000 Tutsi women were raped, producing thousands of children. A generation born from violence. Munyaneza’s first two pieces draw from this deep reservoir of Rwandan trauma. Her second piece, “Unwanted,” which was performed at the Museum of Contemporary Art in 2018, coalesced her own story with those of women survivors she interviewed during visits to her homeland.

At Experimental Station, we were given two excerpts from her next piece. Half of us sat on one side of the square stage, facing the other half of the audience. Munyaneza, dressed in all white, stood off stage next to a mic in one corner of the room. A poem written and read by Asmaa Jama, a Danish-born Somali poet, echoed through the air. Onstage, dancer Keyierra Collins was folded, hinged at the waist, weighed down by something larger than herself. Collins’ sweeping arm movements took her close enough to brush against one of our shoes, though the walls between performers and the audience were never there to begin with.

After the performance, Collins told us the collaboration process began with Munyaneza asking about her family, about how she grew into the person she is today.

It’s a “question of transmission,” Munyaneza says. “What is it we can transmit from our bodies across generations?”

Collins says answering these questions requires exposing yourself. They require trust. The invisible weight she carries across the stage is a weight that isn’t hers alone. It belongs to the women in her family. They are sweeping and caring for the rest as they move through their lives. And she, like Munyaneza, is asking how and why.

Women’s stories again inform the words, choreography and sounds Munyaneza weaves together for us. The colors of all these elements are African or Afro-descendant: She wants to show people of beautiful blacks and browns. She wants to show us the way light moves through diaspora.

This piece, for the moment called “Mailles,” or “Mesh,” will premiere on another continent at the Charleroi Danse Biennale in 2020. Working with six other African women or women who are Afro-descendant, Munyaneza considers it a “political act” to bring together these women across geography. Although her work draws from pain, her own and collective, it harnesses the power and support that can come from a knitted pattern.

The second excerpt was a duet of drum machines with composer Ben LaMar Gay. In it, Munyaneza moved and spoke on and around the stage, in the audience. There were no borders. She hit her back, shouted, pulled her body into a crescent. “They told me to get up and leave if I want to live,” she incanted.

Munyaneza’s sounds dissipated. The second excerpt ended, though it is unfinished. As memory remains unfinished. It moves on. (Amanda Dee)