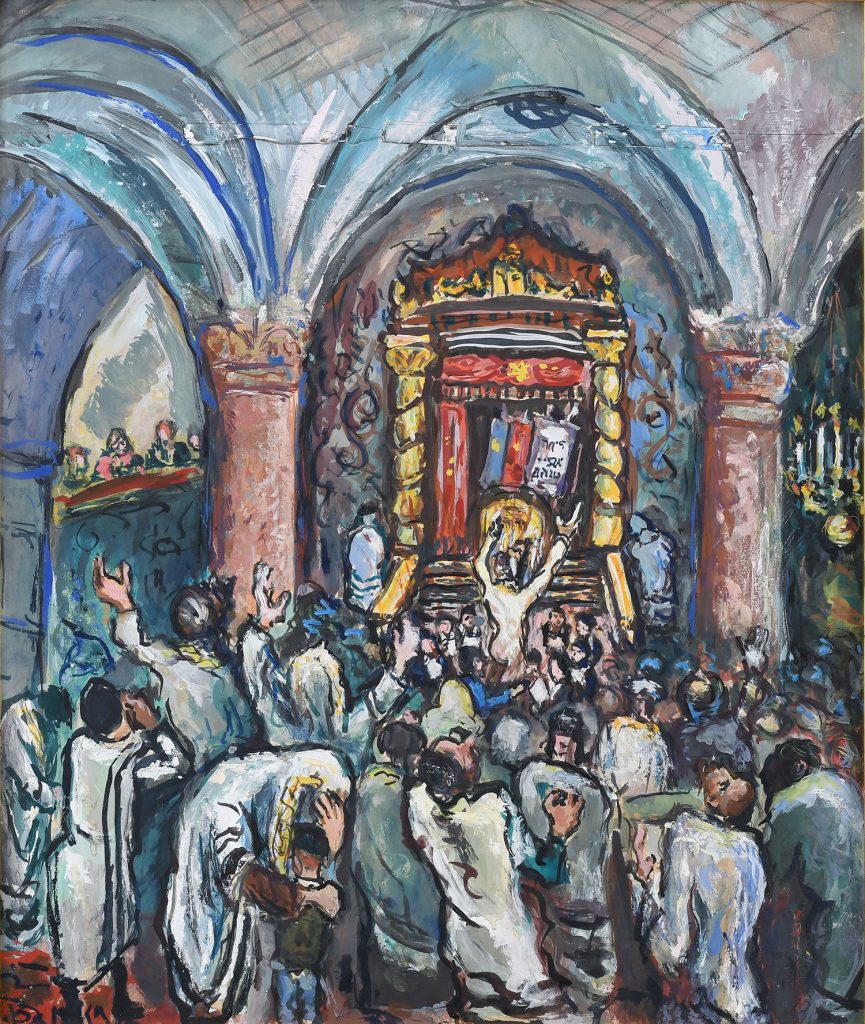 European Jews have been indispensable to modernism: as painters (Modigliani), sculptors (Lipchitz), dealers (Kahnweiler), patrons (Guggenheim) and critics (Greenburg). Yet even as they contributed to that international phenomenon, their own community was experiencing a series of disasters that would be worse than anyone could have imagined. Jewish artists who responded directly to the persecution, flight and relocation of their people remain outside the canon of art history. But it was the modern expressive visual language that many used to tell their story.

They often tell the story of two worlds, the old-world villages of Eastern Europe in contrast to modern American cities like Chicago. “Two Worlds” was actually taken as the title for a series of prints designed by David Bekker (1897-1956) in 1936—an artist who is finally being given his first retrospective at the Koehnline Museum of Art. These monochrome drypoint prints are sharp and lively, especially “Ritual Bath,” where an attractive young woman is receiving unwanted attention from three old crones. Just as poignant is “Bronx Express” (1937), where a bearded old-country Jew is surrounded by a crowd of young urban commuters on public transportation. Bekker’s colleague, Todros Geller, painted a very similar scene, “Strange Worlds,” eight years earlier (now in the collection of the Art Institute of Chicago). Bekker and Geller were members of Around the Palette, a Jewish artists’ organization in Chicago founded in 1926. When the membership disagreed on whether their art should go mainstream, they quit and helped found The American Jewish Artists Club, for artists who wanted to make art for their community. 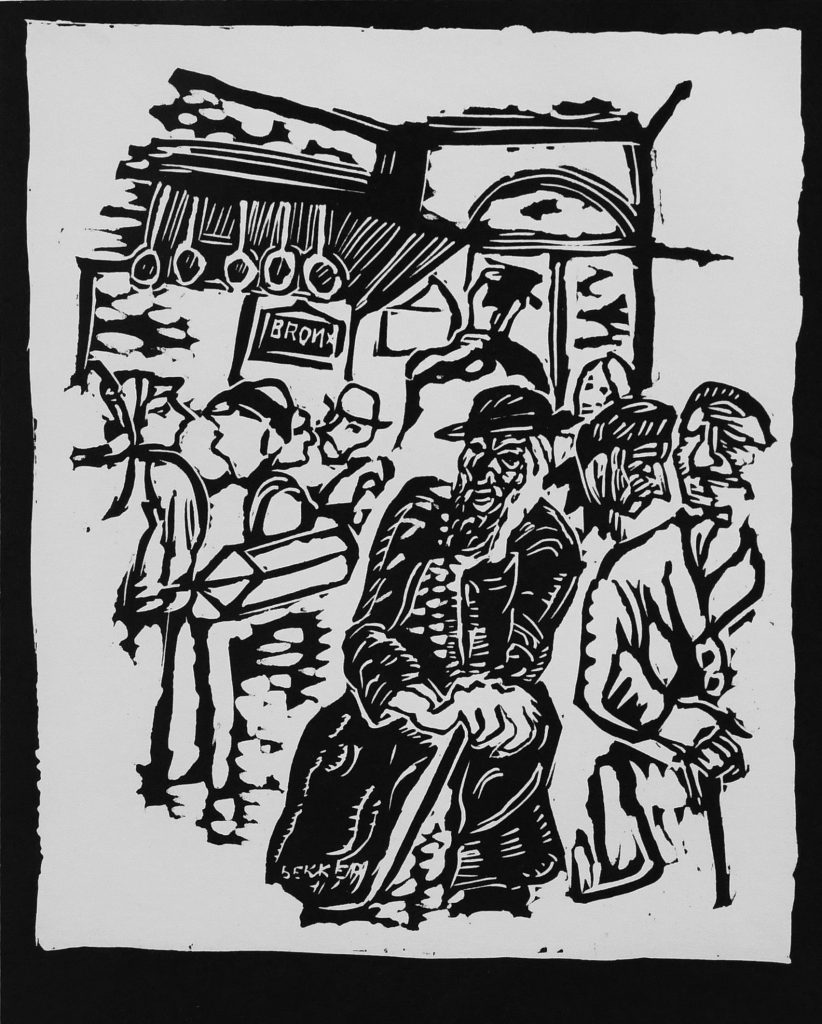 It’s the portraits in charcoal or oil paint that I like the best. Could anything about them be called distinctively Jewish? Social standing does not seem to be a primary issue. As appropriate for a faith that emphasizes the sanctity of human life, these portraits seem more about actual people than an idealization or generalization of type. Representation is more about inner life than outward appearance. Like Rembrandt, Bekker confronts the viewer with a naked human soul. Rembrandt was not Jewish, but he might not have been Rembrandt, just as Amsterdam might not have been Amsterdam, without the local Sephardic diaspora.

Bekker’s narrative paintings can best be enjoyed by focusing on the painterly qualities of small areas. Nervous, choppy brushstrokes have been packed into a chaotic pictorial space with not nearly as much hope as anguish. Were they cut from the canvas and enlarged to heroic proportions, they might well be considered masterpieces of tormented abstract expression. As entire images, however, the narrative, as well as the pictorial space, seems torn in conflicting directions. Are they sentimental or defiant? Do they depict social reality or personal nightmare? How can aesthetic pleasure be associated with community despair? In gallery signage the artist is quoted: “I seek to depict not so much the unfortunate past as the happy and hopeful future.” But optimism is more readily found in the folkloric subject matter than in the sadness that permeates the forms. With the proliferation of tribalism and xenophobia around the planet, it’s more important than ever to bear witness to the horror of those times. But can such art have any aesthetic value?

Bekker was not a gallery artist. Thirty-six of the eighty-two paintings or prints on display originally come from the collection of a Hebrew teacher of modest means who knew him personally. His art would scarcely have been on public display back in his day without the annual Chicago and Vicinity shows at the Art Institute. He appeared in twelve of them, plus fifteen more group shows at the same institution. Art with Jewish or any other religious theme is even harder to see today, now that these comprehensive museum exhibitions have been discontinued, which is one good reason why they should be revived. (Chris Miller)

“From Sorrow to Triumphant Joy: The Art of David Bekker,” through January 24, at Koehnline Museum of Art, 1600 East Golf Road, Des Plaines.