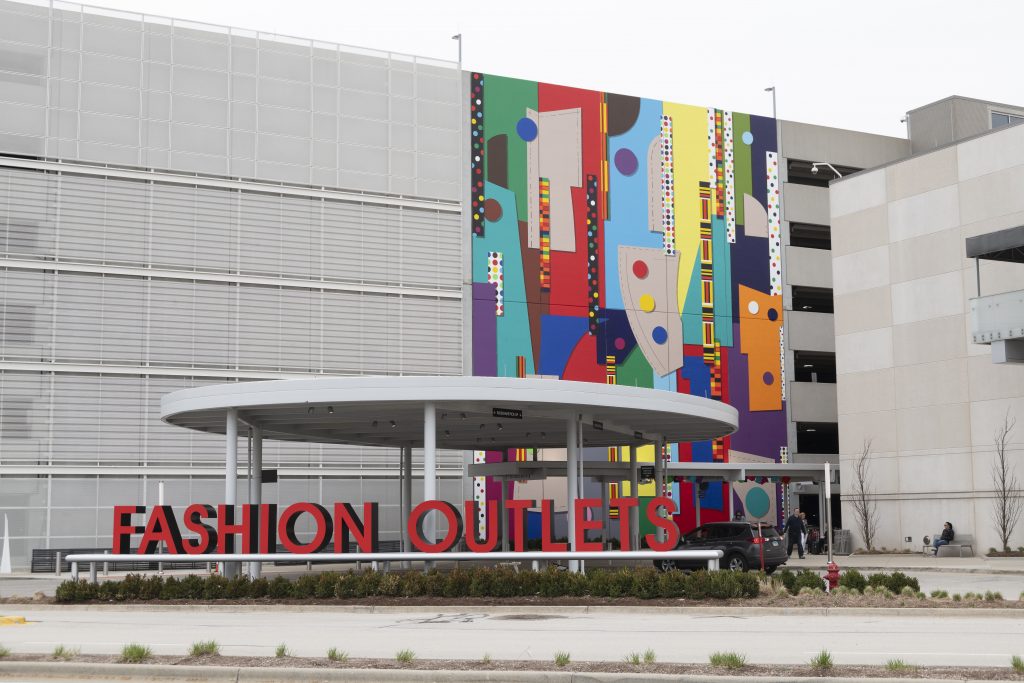 When Generation X was coming of age, malls were at their height in the American consciousness. Bland, homogenous chain stores ensured adolescents everywhere were keyed into the same trends. Paired with food courts and movie theaters, malls had everything you needed to while away bored teenage hours. See movies such as “Clueless” or “Mallrats” (both 1995), or the latest season of “Stranger Things.”

Those days are long gone. Over 4,000 malls closed in 2019, according to a recent Bank of America report, a 140 percent year-over-year increase. More than 9,100 U.S. stores closed last year; these closures come after years of downturn in business following the Great Recession.

But things are looking brighter at the Fashion Outlets of Chicago, a high-end indoor mall in Rosemont, which boasts a museum-quality collection of contemporary artwork. At a time when many cities and states are slow to put dollars toward public art, the mall serves as an out-of-the-ordinary place for folks to encounter artwork in their everyday life. 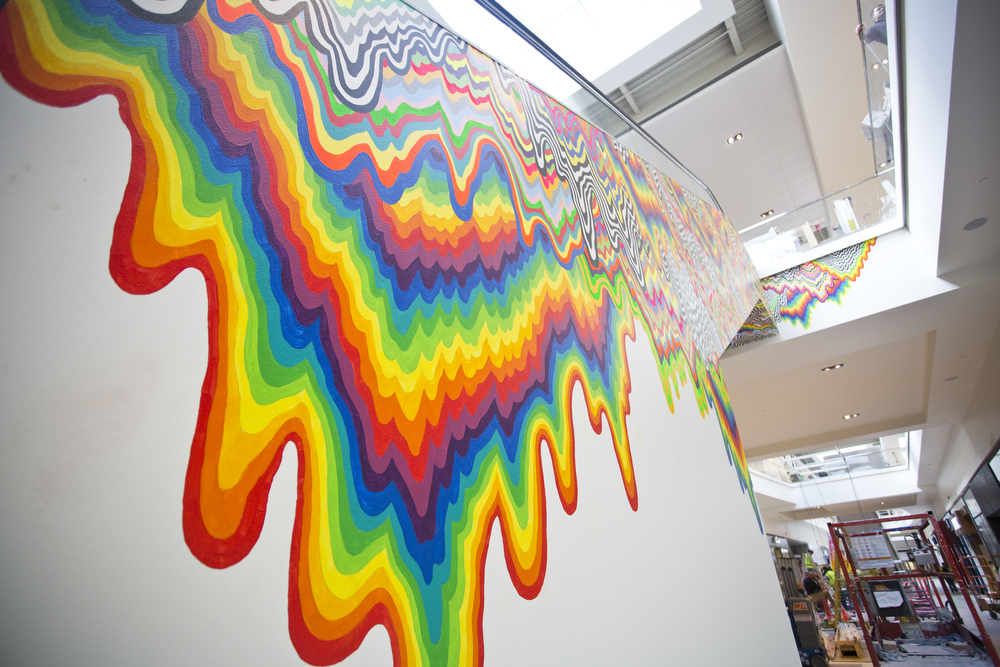 Dubbed “The Collection: Where Art Meets Fashion,” Fashion Outlets currently has nineteen permanent installations on display, as well as three indoor exhibition cases that feature a rotating series of work.

“We’re always looking for pieces that are accessible, not only to art enthusiasts but also for people being exposed for the first time,” says Alex Jakubiak, the vice president of hospitality at Carol Fox and Associates, who handles public relations and marketing for the mall.

Upon entering the main entrance, near Saks Off Fifth, you’ll encounter one of The Collection’s newest commissions, “Fashion Show,” by Derrick Adams. Unveiled in 2018, the bright, boldly-patterned seventy-by-fifty-foot mural pays homage to the late fashion designer Patrick Kelly, making it a perfect fit for the location. Kelly, the first American admitted to the prestigious Chambre Syndicale du prêt-à-porter, was known for making colorful, splashy haute couture inspired by his Southern upbringing. Installed on the side of the outlet’s seven-story parking garage, “Fashion Show” features overlapping panels in rich shades of red, blue and green, among other colors, some showing the dotted lines of a garment-maker’s pattern. The panels are dotted with dots and stripes of varying colors and sizes, along with a deconstructed painter’s palette. 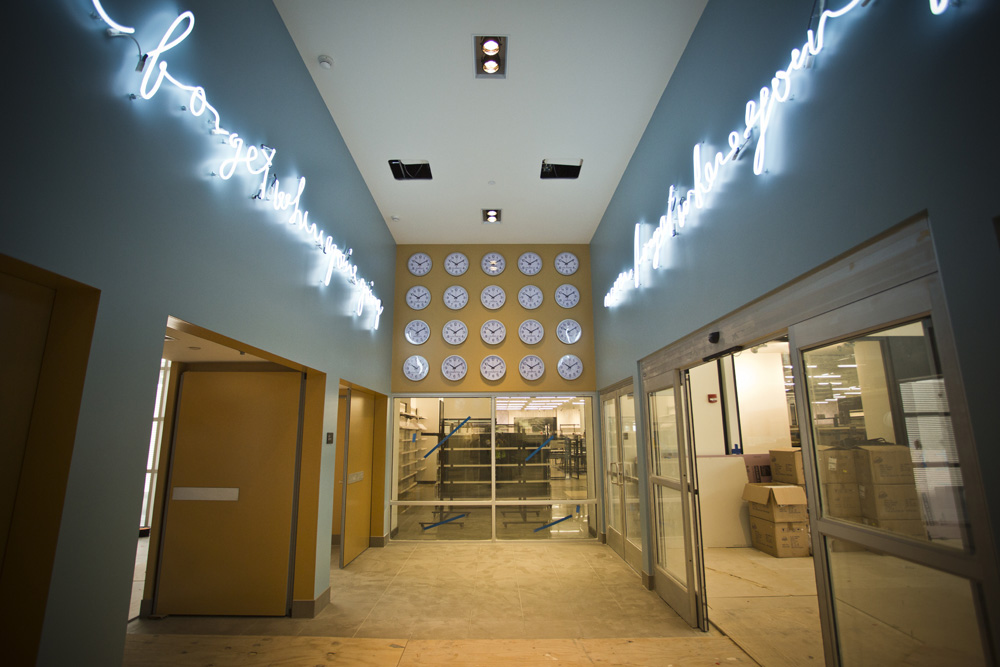 Each indoor entrance to the mall welcomes visitors with a unique, 360-degree, all-encompassing artwork. There’s Jim Drain’s “Rakes and Snakes,” which features a dizzying, checkered pink-and-yellow design, with friendly cartoon snakes slithering on top, painted directly onto the entrance vestibule’s wall. Another entrance was taken over by artist Bert Rodriguez. For his piece, “Never Forget Where,” Rodriguez installed neon lights along opposite walls, which read, “never forget where you’re from,” and, “never forget where you’re going.” On the wall in the middle of these hangs a grid of clocks that show the time in cities around the world. It’s a fitting piece for the mall’s clientele, about sixteen percent of whom are international.

Chad Kouri’s two-part installation, “Art for All,” was unveiled at the same time as Adams’ mural, in 2018. The first part is an interactive art project made in collaboration with software engineer Sean Neilan. The two wanted to come up with a system for people to access art in a context of something they already do everyday: texting was an obvious choice. So Neilan and Kouri created a program where guests at the mall can text a number and receive a message back containing an original artwork. Each piece is generated by an algorithm based on the person’s phone number; since everyone’s phone number is unique, so is each piece. Mine consisted of a blue square, with an orange arc and a dark purple column shape layered on top. The program can generate up to a million unique pieces. 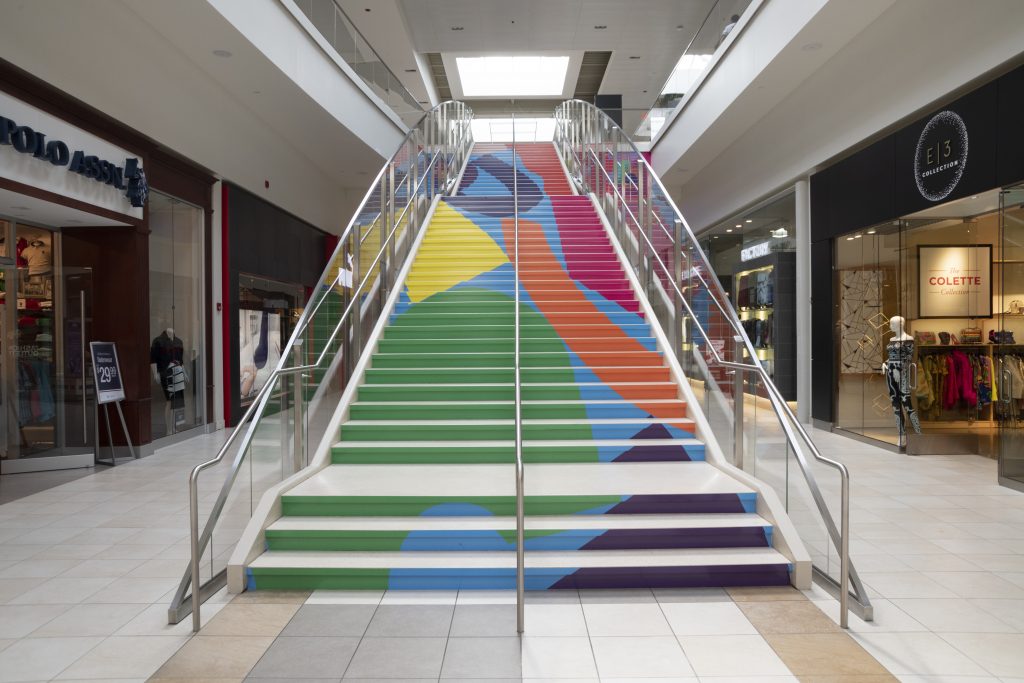 The second part of the project is a staircase painted with the sort of architectural forms that are present in each text-generated artwork: an orange arc, a purple triangle, a yellow rectangle. Near the staircase is a digital kiosk, which displays the most recent user-generated artwork. Participants also have the option of purchasing their artwork as a print.

“One of the main goals of my studio practice is to create an active viewing experience instead of a passive one,” Kouri says. “I’m really just trying to engage people in the conversation of art viewing.”

Rotating exhibition cases are on the second floor of the shopping center, the most recent of which were installed in November. Curated in partnership with the Evanston Art Center, the cases feature work by Paula Froehle, Jill King and artist duo Katrin Schnabl and Anne Guitteau. Each of the artists works with form in their display case, and each relates to fashion in some way. 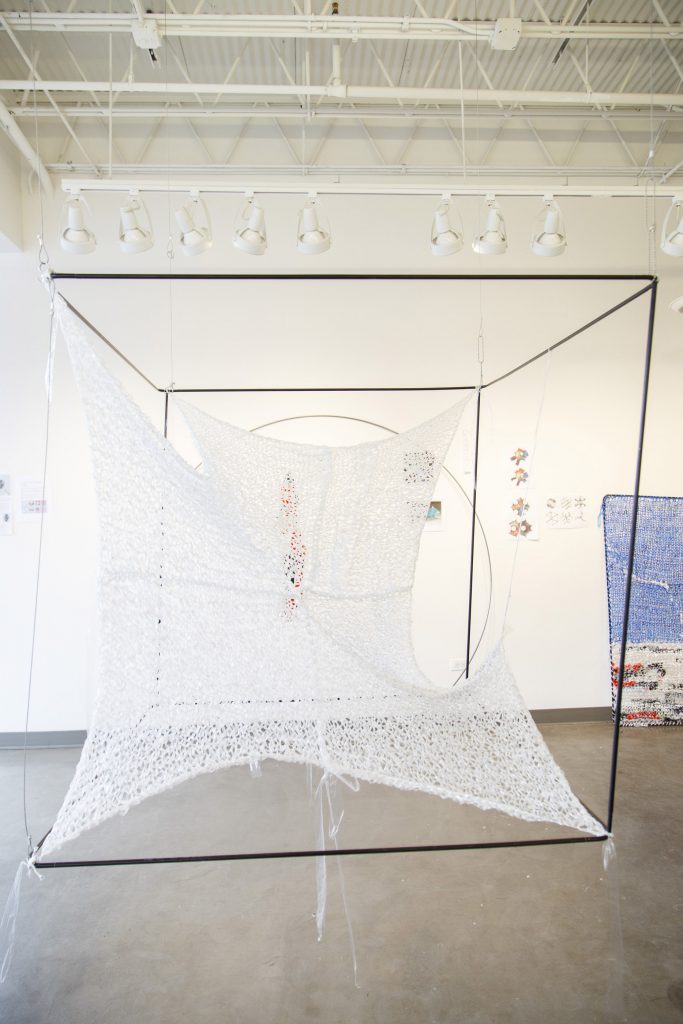 “I Won’t Go Away” by Katrin Schnabl in collaboration with Anne Guitteau, 2019/ Photo: Grace DuVal

Anna Cerniglia, the founder and director of Johalla Projects, has worked with the mall on a number of the installations, including recent commissions by Adams and Kouri. Johalla Projects frequently does consulting and programming outside of traditional gallery atmospheres.

“Johalla makes a point to put art in public space,” she says. “I think it’s really important for people who would normally not go to a gallery, to stumble upon something and feel like they can go to it without hesitation.”

Cerniglia notes how valuable it is when organizations or businesses put part of their budget toward art and artists.

“They could use that money for something else,” she says. “So the fact that the mall even did that, makes me feel pretty excited.”

Kouri agrees that The Collection offers artists a great opportunity to reach a whole new audience.

“I’m really looking to bring artwork to people instead of waiting for them to come to it, so having a public space like a mall where people aren’t necessarily going there to look for artwork, and just kind of giving them a surprise when they show up there,” he says. “I like to bring artwork out of the context of the white gallery walls, to give people an opportunity to really experience it as part of their day-to-day life.” (Kerry Cardoza)