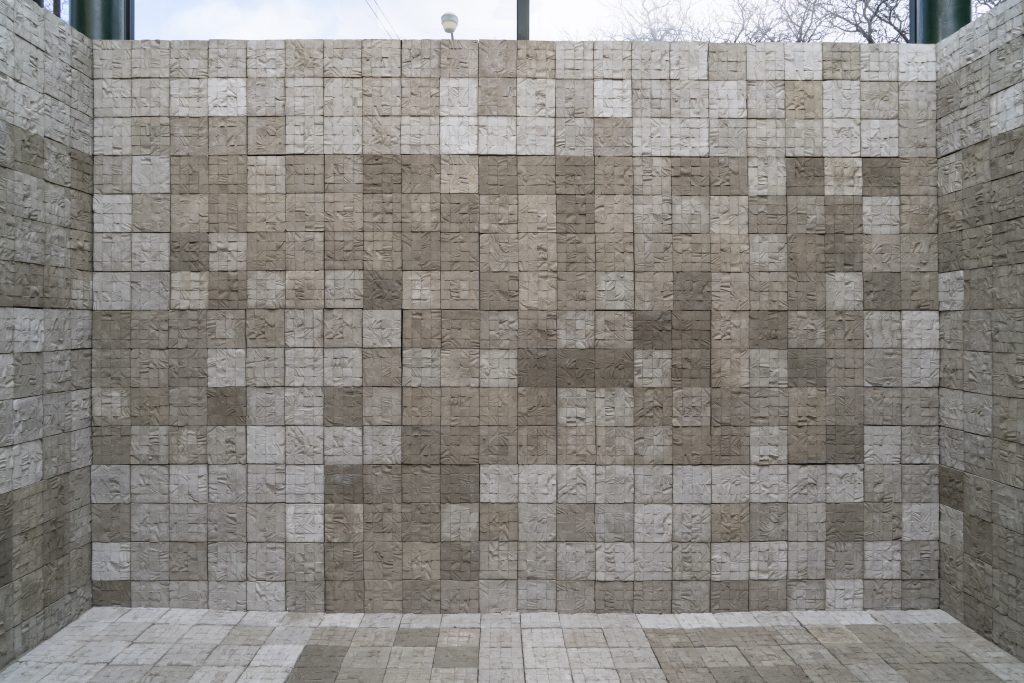 In contrast to Roots and Culture’s regularly scheduled programming, “Beyond Reach” is organized by outside curator Anastasia Tinari after a two-year conversation between herself and artists Selva Aparicio and Valentina Zamfirescu. Aparicio, a Spanish-born artist who works between Barcelona and Chicago, has an art practice which centers on the research of death and mourning. Zamfirescu’s digital work reveals and abstracts memories from the artist’s childhood in Romania during communism’s fall as well as her family’s immigration to the United States. Anastasia Tinari Projects joins Aparicio and Zamfirescu’s ostensibly contrasting practices to ask us how our bodies interact with the world, whether real or virtual, and how we understand the imprints we leave.

On opening night, visitors were received by Roots & Culture founder Eric May’s indoor garden, where plants surround the exhibition’s title wall. We were tucked into a foyer before entering the main gallery space. Rounding the corner to the left lies Aparicio’s “Entre Nosotros” (Among Us), a room composed of six-by-six-inch unsealed concrete tiles cast from nearly a hundred different “donors”—individuals who donated their bodies to science following their deaths. In a range of gray-brown tones, each tile is composed of sixteen individual smaller tiles of disparate skin impressions. Ultimately, there are 640 different skin wrinkles and impressions in the installation.

I observe a nervousness among the guests, which mirrors my own, as we slowly step onto the tile floor, all of us conscious of how our bodies might admire or offend those of the past. Despite initial associations, the installation felt less like an entombment and more like a safe respite, as if these donors, and Aparicio’s labor, were holding space and time for each of us. As I made contact with crisscrossed wrinkle patterns, nipples and fingers, I was struck by the texture of my own skin, and the way my oils were absorbed by the unsealed concrete.

Upon leaving the installation, I felt exposed, uncomfortably aware of how my body facilitated my experiences. “One One Thousand,” appeared similarly unprotected while demanding attention. Suspended in the center of the back room, a projector cast a video of an unadorned, digitally rendered, suspended body on to an expanded foam sculpture on the gallery’s back wall. Made from the artist’s likeness, “One One Thousand” shows how the digital takes up space, but remains fragile, for as we interact with the work, our bodies obscure the already restrained image of her body on the wall. 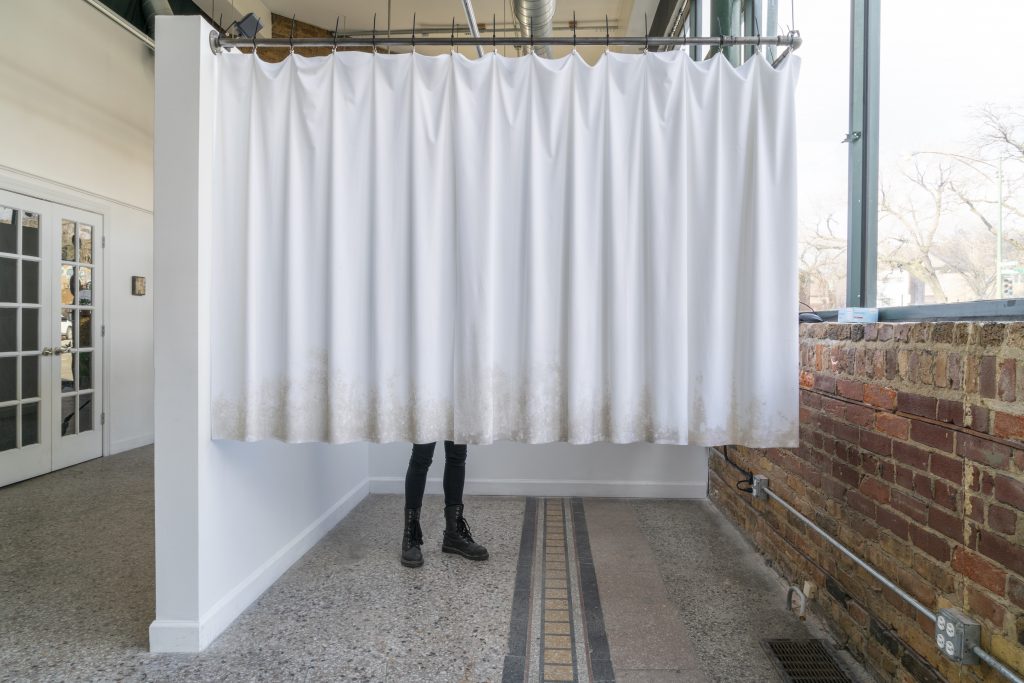 Across the room, a stained curtain reveals audience members’ feet, one at a time, as they occupy Zamfirescu’s VR installation “Archive.” The curtain is weathered not through constant physical use, but through a digital repetition of an image. “The curtains are digitally stained because the digital shapes my work,” Zamfirescu says. “I wanted to show how the digital shapes the physical world.”

“Archive” requires an empty space for viewing, but as I placed the headset on I was immediately thrust into a cyclical journey around a pedestal. Led by a fragmented woman figure, whose hand-holds were reminiscent of a crank, I was free to change my perspective of the white-and-pink flowered landscape, but restrained from physically interacting with my guide. There are figures, women of pink and blue hues, atop the core, a modernist monument drawn from the artist’s childhood in communist Romania. The figures applaud as me and my companion walk cycle after cycle under a setting sun. Zamfirescu says that the companion, intentionally fragmented, is constructed in her mother’s likeness. “Archive” provides extraordinary space for us to perceive, but the physical restrains us in this case, for although I desired to break from the physical bounds of the gallery, I was limited by the walls around me. Through the abstraction of her memories, Zamfirescu critiques the obfuscation of marginalized bodies and returns autonomy to herself, the creator.

Aparicio’s “Mourning Veil,” felt like a reprieve from the virtual, as if she were advocating for the strength of what might initially appear delicate. The veil is shaped of magicicada wings the artist collected in Kansas, after tracking the life and death of the species, which resurface every thirteen or seventeen years. The wings of these resilient insects refract and reflect the light of the overhead artificial lights. In a gesture which deconstructs the patriarchal associations of the mourning veils that Aparicio remembers women in Spain were forced to wear in her youth, the work is bound together by the hair of Aparicio and her mother.

“When I asked my mother for her hair she cut it off right here,” Aparicio says, motioning to the nape of her neck. ”And I did too, it is our hair that binds the wings together…both in mourning and in rebirth.”

Through Aparicio’s relationships with her donors, both human and insect alike, and Zamfirescu’s use of personal memories, the artists implore us to consider how our bodies come to interact with our world. They do this in a literal sense, but additionally, through the restraints of time and virtual space they cry out about the limitations the world violently places on our bodies. Though Zamfirescu’s body takes up virtual space, it is obscured, and though Aparicio’s donors live on in her works, their autonomy is obfuscated by time. In a world where virtual space is only becoming more abundant and our physical world arguably more precarious, the artists present the body as transformative, and as a vehicle for change. (Amanda Roach)